The heavyweights of the Monster Energy Supercross world came out to play for Anaheim 2 this weekend. The main event turned into a one-on-one battle between Eli Tomac and Ken Roczen, who were also the two heat winners. Cooper Webb was back in form with Zach Osborne showing some true toughness. In the end, the red plate switched hands and the points are tighter than ever.  For extended coverage of 2020 Anaheim 2 Supercross, click here. 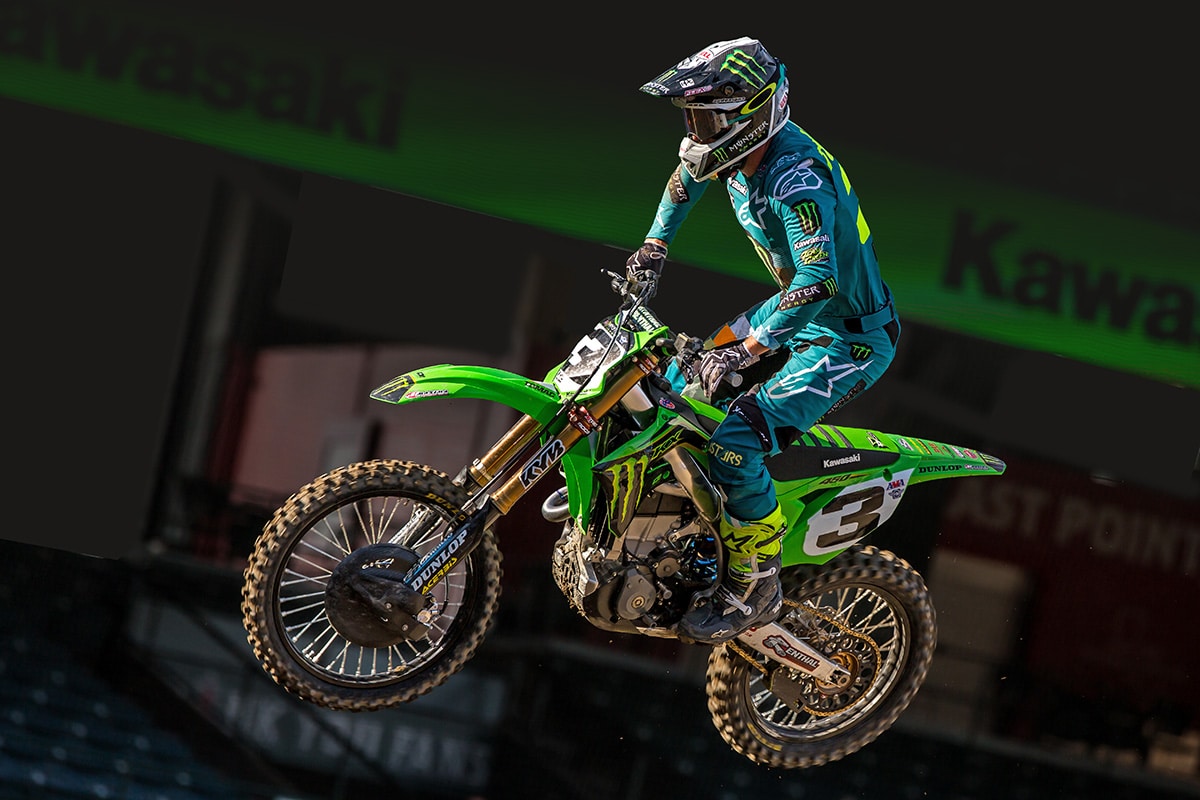 Eli Tomac and Cooper Webb were up front from the start of heat one. There was a pile up in the first turn that took out several riders including Justin Brayton. First Tomac was leading, then Webb was in front, then Tomac was in front again. Dean Wilson was a solid third ahead of Justin Barcia and Tyler Bowers. Before long, Brayton managed to get himself back up into a transfer spot with Chad Reed right behind him. Tomac stretched it out on every lap with Webb riding a lonely second place. Wilson, in the meantime, had his hands full with Barcia. In the later laps, most of the action was watching Brayton pick off a few more spots, eventually coming to a stop behind Benny Bloss in seventh. Tomac won, looking like his old self. On the final lap, Justin Hill passed Reed for the final transfer.

Adam Cianciarulo and Zach Osborne were side by side through the first turn with Cianciarulo eventually taking over. Osborne then got bumped around and let Ken Roczen, Jason Anderson and Justin Bogle past.  Malcolm Stewart and Aaron Plessinger were having a battle for sixth, with Stewart showing amazing speed in the whoops. Up front, Cianciarulo and Roczen were hammering each other for the lead, with Anderson slowly slipping back. Halfway through the race, Roczen took over but Cianciarulo didn’t give up. For a full lap, it was unclear which way it would go, but eventually Roczen began to open it up. While that was going on, Stewart was up solidly in fourth with Martin Davalos in  fifth. Roczen won over Cianciarulo by two seconds.

All eyes were on Chad Reed in the last chance qualifier, but it was Jason Clermont in front initially. Near the end of the fist lap Clermont went down and gave it to Ryan Breece. Reed got a poor start, but got up to second very quickly, and then he took the lead at the halfway point of the short race. Kyle Cunningham looked good in third until he fell with two laps to go. At the flag, it was  Reed, Blose, Breece and Alex Ray. It would be Reed’s 252nd main event.

The main stared with Ken Roczen getting a clear holeshot. Blake Baggett was second with Zach Osborne, Copper Webb and Aaron Plessinger close behind. Tomac was in sixth and Barcia was outside the top 10. Two laps into it, Roczen and Baggett already had a surprisingly large lead.  Baggett was actually trying to take the lead away from Roczen when he washed out the front wheel and fell. That created a three-way battle for second between Webb, Tomac and Anderson. Soon, Cianciarulo came up to join them. Tomac eventually won that battle and set out after Roczen, as  Barcia closed in on Osborne for sixth. In the first half of the race, Tomac clicked off lap after lap, closing in on Roczen, mostly by going through the whoops more quickly. When Tomac took the lead, there was nothing Roczen could do but try to hang on. Anderson, Webb and Cianciarulo were left almost 10 seconds back. As the race progressed, Tomac pulled away from Roczen steadily, leaving the German Honda rider all alone for most of the race.  The battle for third finally calmed down with Webb winning out. Osborne came on strong in the late laps for fourth ahead of Anderson and Cianciarulo.