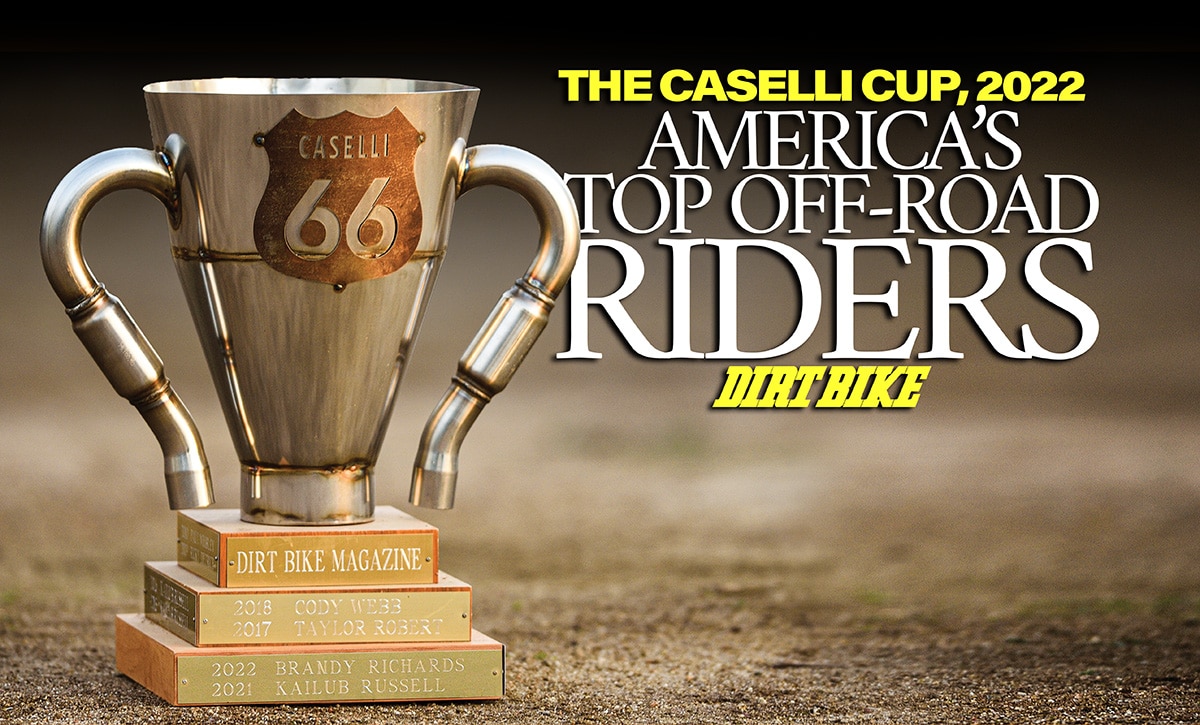 America is big. We have so much racing, such diverse terrain and so many riders that it’s almost impossible to compare them all. How can you come up with criteria to rank desert racers, woods specialists and sprint racers? We’ll make it easy. It’s about courage. That’s a common denominator in all off-road racers, but some riders exhibit it more clearly than others. We call our annual list of America’s top off-road riders the “Caselli Cup” in honor of Kurt Caselli, one of the most courageous off-road riders we’ve ever met. To create the list, we look at current riders who compete in the U.S., regardless of nationality, and riders who represent the U.S. in races abroad. We like to think of it as a current snapshot rather than a rehash of the year behind us. We give special weight to riders who compete in more than one venue in order to celebrate the courage of stepping out of your comfort zone. Here’s the way we see it right now.

1 BRANDY RICHARDS
Three perfect seasons in 2021
In the history of motorsports, only a handful of riders have achieved the most coveted of all goals—the perfect season. Brandy Richards had three of them in 2021. She went undefeated in the Women’s Pro class in both WORCS and the AMA National Grand Prix Championship, then she won every special test in the Women’s Trophy class at the ISDE in Italy. She did it despite adversity and injury, overcoming obstacles that most men simply wouldn’t understand. In 2021, she even topped everyone in the WORCS Pro Am class. That’s courage.

2 DANTE OLIVEIRA
WORCS Pro Champion, AMA NGPC Champion, ISDE Gold
Often, you can’t pinpoint the exact time when one era ends and another begins. The rise of Dante Oliveira as one of America’s greatest off-road talents, however, was obvious to anyone paying attention. In 2021, he won the Pro class at the West Coast’s two most respected venues—WORCS and AMA NGPC. He was also chosen to represent the U.S. at the ISDE and came home with a gold medal and third in the E2 class. It looks like Dante’s time has arrived.

3 BEN KELLEY
AMA GNCC Champion
Talk about pressure. Kailub Russell, the winningest rider in GNCC history, officially retired, leaving a vacancy at the top of the KTM team. Ben Kelley was chosen to fill those shoes for 2021. He battled all year with Steward Baylor, taking the fight to a muddy conclusion at the Ironman in Indiana. In that race, both riders drowned their motorcycles. Kelley was eventually able to restart his bike and continue to finish within the top 10, making for one of the most memorable season finales in off-road history.

4 STEWARD BAYLOR
AMA National Enduro Champion and AMA GNCC #2
Steward Baylor is his own man. While most professional athletes of his stature seem to be almost robotic in their training practices and routines, Steward is outspoken, extroverted and a clear believer in having fun. That’s earned him five AMA National Enduro Championships and one of the biggest fan bases in off-road racing. In 2021, he came closer than ever to winning America’s off-road Holy Grail: the GNCC XC1. It’s only a matter of time.

5 TAYLOR ROBERT
ISDE Gold Medal, WORCS #2
Taylor Robert is the acknowledged leader of America’s ISDE effort and the unofficial U.S. ambassador to the rest of the off-road racing world. At 32 years old, he’s reached milestone after milestone, including both individual and team ISDE championships, three WORCS Pro championships and even an X Games gold medal. In 2022, he’s changing horizons, competing in the AMA National Hare & Hound series, as well as the AMA West Hare Scrambles.

6 RICKY BRABEC
Dakar Stage Winner
Ricky Brabec is currently the most respected rider in the world of international rally racing. His speed and navigation skills are acknowledged as the best in the world, and that’s why he’s a favorite to earn another Dakar victory, if not in 2022, then very soon. Like most Americans, we’re proud that Ricky rides under U.S. colors. We’re only bummed that we don’t get to see him race more often stateside.

7 COLE MARTINEZ
AMA NGPC #2, WORCS #3
Often, motocrossers think they can transition to off-road racing with instant success. They are usually wrong. Cole Martinez is the exception. The SLR Honda Racing team saw a spark of talent that needed to be fanned into flame, and after two seasons of effort, he’s turned into a serious threat in both the AMA NGPC series and WORCS.

8 JOSH STRANG
GNCC Winner
Strang has assumed the role of a GNCC elder statesman. He won the XC1 title in 2010, and every year since then, he has been a serious threat to win individual races, if not the championship. His fitness is legendary, and, even now, after more than a dozen years of racing in the U.S., he still has the speed to win, as he did this year at the John Penton in Millfield, Ohio.

9 JORDAN ASHBURN
GNCC XC1 #3
Jordan Ashburn is the ultimate professional. He’s been lurking in the top five in GNCC racing for a decade and has been known to ride extreme enduros and EnduroCross just for fun. This year, he had an excellent season on the Magna1 Motorsports/Husqvarna team to finish on the XC1 podium and also earn ninth in the Tennessee Knockout.

10 GRANT BAYLOR
GNCC Winner and National Enduro Winner
Grant Baylor came out of the gate hard, winning the opening round of the 2021 GNCC series on his new GasGas. He also won a National Enduro and looked to have a shot at repeating his NEPG championship, but a separated shoulder took him out mid-season. As usual, when Grant is healthy, Grant wins.

11 JOSH TOTH
GNCC XC-1 #5, National Enduro Winner
Josh Toth is another graduate of the New England Trail Jesters, just like Ben Kelley. In 2021, he won more rounds of the National Enduro Championship than anyone, including eventual champ Steward Baylor. He also earned a GNCC XC1 podium in his first season in that class. He looks stronger all the time and is clearly a future champion.

12 JOHN GIRROIR
GNCC XC2 Champion, ISDE Gold Medal
Trail Jesters team boss Ross Mauri has a talent for finding talent. He groomed John Girroir through his New England racing career before handing him to the Coastal GasGas Factory Racing Team. The result was an XC2 title and a gold medal as a rookie member of the U.S. Trophy team at the ISDE in Italy.

13 JOE WASSON
AMA Hare & Hound Champion
No one appreciated earning a National Championship more than Joe Wasson. “The list of names I was added to includes basically all my childhood superheroes—and now I’m one of them!” Wasson clearly was the class act of the series this year, winning four races and finishing on the podium eight times.

14 COLTON HAAKER
EnduroCross Champion
Colton is the best EnduroCross rider in the world and has the championships to prove it. In 2021, that series regained its momentum and is once again attracting crowds and thrilling fans. In 2022, Colton will defend his U.S. championship and attempt to regain the FIM World Super Enduro Championship that was once his.

19 MATEO OLIVEIRA
WORCS Pro 250 #3, AMA NGPC Pro 2 #3
Younger brothers usually have to fight for attention. Mateo Oliveira earned everything he has achieved, regardless of all the acclaim for his brother Dante. Between WORCS and NGPC, he won more races than anyone in the 250 Pro class. A mid-season injury set him back, but he reports that he is healthy going into his third season on the RPM Racing KTM team.

21 AUSTIN WALTON
AMA NGPC Pro #3, WORCS Pro #7
Austin Walton justified his place on the Rockstar Energy Husqvarna team with a win in the AMA NGPC Pro class and a selection to be on the U.S. Junior Trophy team at the 2021 ISDE in Italy. Unfortunately, he broke his scapula in Italy, derailing the end of his 2021 season. When he came back, he picked up where he left off, in contention for the lead in both WORCS and NGPC.

22 TREVOR STEWART
AMA GNPC Pro #4
Trevor Stewart is always a threat in his effort to recapture the AMA NGPC championship. In 2021, he focused most of his racing efforts on western GPs but also hit some races like the Two-Stroke Championship just for fun. In 2022, he will ride for Purvines Yamaha.

23 CRAIG DELONG
AMA National Enduro #3, GNCC XC-2 #2
After clinching second in the XC2 class, Craig DeLong made his XC1 debut in the brutal conditions of the Ironman GNCC. He finished third in class and topped his best overall finish of the year, serving notice that he’s ready to make his mark in the premier class.

24 PRESTON CAMPBELL
AMA National Hare & Hound #3, NGPC Pro #6, ISDE Gold Medal
After years of mopping floors and schlepping bikes for the JCR team, Preston stepped out of the background to become the team’s top rider in the AMA National Hare & Hound series, as well as western GPs and hare scrambles. He also rode his first ISDE and has been showing interest in rally racing. Keep an eye on him.

25 COLTON AECK
AMA NGPC Pro 2 #2, WORCS Pro 250 #4
You gotta love a guy who will push his bike a mile to the checkered flag rather than take a DNF. That’s Colton Aeck. He has put the injuries of the past behind him to become a threat at each and every race he enters. In 2022, he will continue to ride for the 3 Brothers KTM in various western races, including WORCS, NGPC and SRA. o