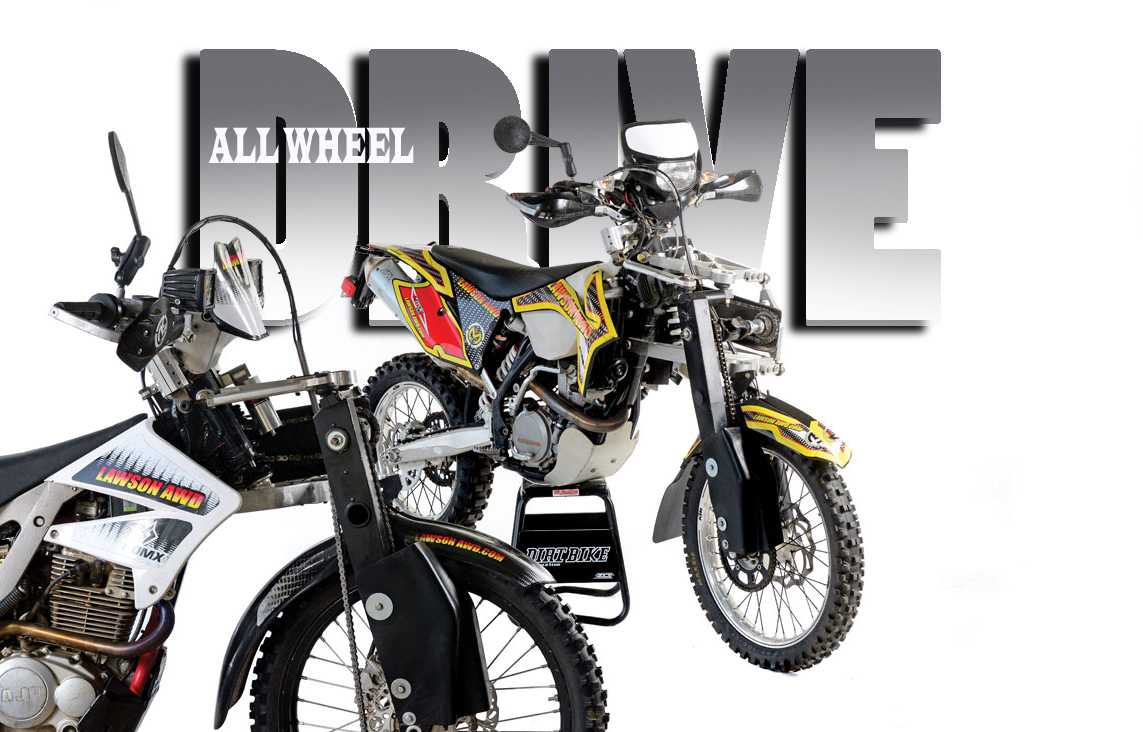 Riding the Lawson All-Wheel Drive tells you more about the men who built it than about the bike itself. It is, as you might guess from the name, a two-drive motorcycle, but it’s nothing like those that have come before. The Lawson is a concept bike designed to explore the notion of true all-wheel drive on a motorcycle. This isn’t part-time or on-demand drive; it’s all-wheel, all the time.

The project is a collaboration between Bill and Marty Lawson, a father/son team who might or might not be related to me—we never compared family trees. I first met them two years ago at the KTM Adventure Rider Rally in Steamboat Springs, Colorado, where they were showing an earlier version of the bike. I asked all the obvious questions. Are they selling them? No. Are they making kits? No. Do they have some kind of government contract? No. Most of the answers were no, leaving the most obvious question of all: why?

William Lawson is a retired mechanical engineer living in Somerset, Wisconsin. His son, Martin, is an engineer who works for the University of Wisconsin, Madison, designing laser beams that measure particulate content in the earth’s atmosphere (or something that sounds like that; I wasn’t really listening). Marty had the idea for the two-wheel-drive motorcycle, and his dad had the time to build it. They felt that true two-wheel drive hadn’t yet been given a fair shot. The three designs that are most commonly known are the Rokon (which has no front suspension), the Ohlins-Yamaha 2-Trac (a limited-output hydraulic system) and the Christini (which requires considerable rear-wheel spin before engagement). The Lawsons wanted to make a drive system that could transmit the same amount of torque to both wheels.

They did it by combining a Hossack front suspension design with their own drive system. The Hossack front end is what BMW uses on the R1200GS; it is sort of a parallelogram with a single shock. Power is transmitted from the rear sprocket to the front wheel through a series of chains, sprockets and U-joints. There’s nothing mysterious about the design at all. You can look at it and understand everything without an engineering degree. There’s a one-way ratchet that allows the front wheel to freewheel faster than the rear wheel, which happens, for example, when you lock up the rear brake. A big difference between this and most other AWD systems is that the gear ratio that drives the front wheel is about the same as the one in the rear. On the Christini, for example, the gear ratios are about 20 percent different, so the front wheel is freewheeling until there’s a certain amount of rear-wheel spin. There’s only about a 1-percent difference on the Lawson.

The drive system in front isn’t quite as beefy as the one in the rear. The chains are 428 (as opposed to 520 in the rear), so to guard against the theoretical possibility of overtaxing the system, there’s an adjustable clutch in front. If the front end is trapped while the rear wheel is free, the clutch can slip before anything breaks.

All this was worked out in a series of seven different prototypes. The first was on an older Yamaha TY350 trials bike. The most recent two are a KTM 350EXC and an AJP PR-4. I got a chance to live with those two bikes for about a month.

The whole point of these projects is to see if there’s a feasible application for all-wheel drive. After riding them, I can say there is, but it’s not what you might think. They aren’t cheater bikes that will allow a guy like me to suddenly ride like Cody Webb. In the hands of an expert, a rear-wheel-drive motorcycle can do anything the Lawson can do and, in most cases, do it faster. Cody Webb and Jonny Walker get over obstacles by attacking them and using momentum. They barely let the front wheel touch the ground as they leap and splatter. That’s easier said than done for most people. The Lawson is like a rock crawler. You leave both wheels on the ground and pull your way forward. It isn’t as glamorous, and it doesn’t look as pretty, but it requires less commitment.

There are some interesting advantages to the Lawson way of doing things. For one, mistakes are easily forgiven. If you falter halfway up a hill, you don’t have to go down and start over. You can stop and then start with a reasonable expectation of success. The same is true for most difficult sections. There’s a horrendous firewood pit that Ty Davis designed for Glen Helen’s EnduroCross course that I have yet to clean on a regular bike. I got through it on the Lawson by clawing a few feet forward, resting, then going a few more feet and resting again. It took a while, but I did get through without the usual leap-in-and-crash-out scenario. On most regular soil there’s almost no wheelspin. The bike barely even leaves a track, which is excellent if you’re riding in a place where you don’t want to make any marks. Another unexpected benefit is that the front brake operates both wheels because of the front-wheel ratchet. That’s a very big deal on unsuccessful hill-climb attempts. When you come to a stop with both feet dangling, you can prevent the dreaded rearward slide.

Disadvantages? There are plenty. The biggest is the extra weight on the front end. These bikes are designed to prove a concept—not to be elegant, race-ready or light. Bill says the system adds 32 pounds to the front end of the KTM. The wheelbase is also about 5 inches longer, and that makes it difficult to loft the front wheel. As a result, you can’t really attack obstacles Cody Webb-style. You have to crawl over them—and sometimes you just don’t have the ground clearance to do that. And, the front suspension is a work in progress. The front wheel doesn’t travel on a linear plane as it does with a telescopic fork. It travels in an arc like a rear wheel, and that makes it act differently on different-shaped bumps. It can be harsh, and it can be plush. I’m sure Bill and Marty have come a long way since their first prototype, but telescopic forks have about 60 years of development behind them.

Another characteristic that takes some getting used to is that the bike steers by pointing the front end where you want to go, regardless of speed. Without getting into an egg-heady analysis of counter-steering, you still have to adjust to the fact that you don’t slide around a turn. You don’t slide anywhere on the Lawson.

Expert-level riders appreciated the technology, but most said that it could actually limit the KTM 350 that we tested. They said they could accomplish more on a stock 350 with a lighter front end and aggressive technique. Riding the AJP version, on the other hand, is a very different experience for anyone—expert or novice. AJP, if you don’t know, is a Portuguese company that’s new to the U.S. The PR4 has a mild, 233cc, air-cooled motor aimed at beginners. Two-wheel-drive technology actually opens doors for that bike and allows it to do things it couldn’t possibly do on its own. It doesn’t have the power to attack hills, and lofting the front end takes effort. So, rolling ahead slowly is the only option it has. With AWD it’s unstoppable. Hills that would be absolutely impossible for a bike of this level are easy as long as you put it in first gear and keep going. The AJP’s low seat height lets you paddle along with your feet at speeds so slow it’s hard to keep your balance.

That illustrates a point that Bill made—the AWD system really shines for riders of moderate experience. Outright beginners aren’t really interested in conquering tough terrain, and top-level racers are put off by the additional complexity. But, there’s a middle ground where the bike has a calling. Bill thinks it might appeal to an ATV rider who wants a new experience or a hunter who needs to get into a rugged area.

BACK TO THE FIRST QUESTION

So why did they do it? Why have they invested so much time and money in what boils down to a design exercise? The AWD is too expensive to market as a kit, and the Lawsons don’t have the resources or the desire to build whole motorcycles. The whole purpose was to prove a point and show not only that such a system is possible, but it can have a practical application. Having accomplished that, the job is done for now. There’s certainly more tinkering that can be done. They think that 10 pounds can come off without sacrificing durability,   and the front suspension can certainly be developed further. Beyond that, it’s just a waiting game. The best-case scenario is that a manufacturer will step in and take the system to the next level, or maybe a military contract might unfold.

If none of that happens, you still get the feeling that the project was worthwhile for Bill and Marty. Think of it like this: what was the coolest thing you ever did with your dad?