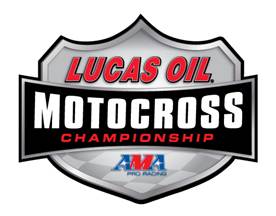 WORTHAM, Texas (June 6, 2009) – After grabbing his first career victory in the premier 450 Class just one week ago, Rockstar/Makita/Suzuki’s Mike Alessi, of Victorville, Calif., cruised to a 1-1 sweep of the day’s motos to earn the overall victory at the Flagstar Bank Motocross National from Freestone Raceway, round three of the 2009 Lucas Oil AMA Pro Motocross Championship. Rockstar/Makita/Suzuki’s Ryan Dungey, of Belle Plaine, Minn., grabbed the win in the 250 Class.

Alessi grabbed the holeshot in both moto one and moto two and never looked back, quickly gapping the field and winning by double-digit margins in each. The current points leader extended his advantage in the standings to 31 points over his rivals and has claimed early control of the championship chase.

‘I knew it was going to be hot and I prepared myself,’ explained Alessi. ‘I think today was really awesome. We still need to take it one race at a time. After the race I was getting undressed and I was already watching tape from High Point for next week. ‘

Honda Red Bull Racing’s Andrew Short, of Smithville, Texas, garnered his first podium finish (2-3) of 2009 in front of his home state crowd while Rockstar/Makita Suzuki’s Chad Reed, of Australia, assumed third overall (5-2) for the second week in a row.

Dungey’s second win of the season came on the heels of an impressive moto two victory, which followed up a second-place finish in the first moto. The Minnesota native has claimed the second moto in each of the three races in 2009.

‘It is my third year and I’m still at the beginning of my career the way I look at it,’ stated Dungey. ‘I feel like I belong here and thinking like I feel that I need to step up. There aren’t any excuses and I can’t expect anything less. I need to take every opportunity and grab a hold of it. They did an awesome job today with the whole track. They left the ruts and I really thought it would be one lined, but it was great.’

‘Obviously I got a good start, but I made some mistakes,’ said Fiolek. ‘(Jessica Patterson) was riding great and she got by me but I just kept riding and used a line that I found in the last lap of practice that I knew was faster. It worked out. I try not to think too much about (the pressure). My (bike) is unbelievable but there are a lot of talented girls out there so I just go out there and do the best I can.’

The Lucas Oil AMA Pro Motocross Championship continues with round four next Saturday, June 13 from Mt. Morris, Pa. for the Monster Energy National at High Point Raceway. Coverage of next weekend’s race can be seen live on NBC, Saturday, June 13 at 4:30 p.m. ET.