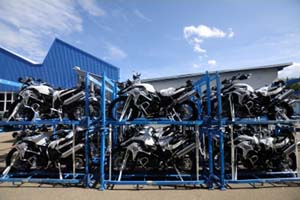 2012 GS TROPHY RECCE from Jon Beck on Vimeo.
Munich. We are now just a few weeks away from the start of the third BMW Motorrad GS Trophy, the South America 2012 edition that will take place on the tracks and trails of the lower Andes found in Chile and Argentina. From November 24 until December 2, 45 riders from 19 nations from around the world, all riding identical BMW F 800 GS motorcycles, will compete in a week of adventure riding, special tests and teamwork challenges. It’s a week that will also be about experiencing the breathtaking landscapes of this Patagonian region, connecting with the natural world and even celebrating international brotherhood while enjoying this iconic genre of adventure motorcycle.

With no time to spare – the GS motorcycles will shortly arrive at the Chilean docks, the riders are making their final arrangements – here’s an overview of one of the most innovative motorcycle competitions in the world today, explaining what the event is about, where it’s happening and when it’s happening.

What is the GS Trophy?

While the BMW Motorrad GS Trophy is a competition, in the often-quoted words of one of the event’s main organisers, Tomm Wolf: “It is not a race!”

With 45 amateur riders in 15 international teams (plus 15 journalists, one attached to each three-man team) the GS Trophy is a seven-day 2000km adventure, mostly ridden off-road. Along the way, the participants compete in a variety of tasks that are consistent with the BMW GS lifestyle. So while enjoying long distance overland riding, the riders will also be completing special tests which are designed to exercise their riding and navigation skills, their knowledge of, and ability to live in, the natural world – and their ability to come together as a team.

Bringing together the GS family.

The South America 2012 event is the third edition of the biennial BMW Motorrad GS Trophy. The previous editions took place in Tunisia in 2008 and Southern Africa in 2010. A measure of the event’s extraordinary success is that while pitching teams from different nations against each other it also creates a sense of brotherhood and camaraderie that brings them together. It’s an experience – a unique, once-in-a-lifetime experience – that creates bonds between the participants, and often between the participants and the people they meet along the way.

The 2012 event is now three-times the size of the 2008 original as, worldwide, more and more BMW GS riders have been inspired to get involved. For this edition the GS Trophy welcomes for the first time competitors from Central Eastern Europe, from Russia, as well as from France and the countries of South America.

“We have in the past called the GS Trophy the ‘Olympic Games for GS riders’,” explains BMW’s organiser Michael Trammer. “This year, more than ever, that is true. And it holds true to the original concept of the Olympics, the riders are all amateurs, just everyday enthusiastic riders who will come together to share an experience that will be so rich and so exciting. We will be bringing together people from so many different cultures and backgrounds, but all sharing the same love for GS motorcycles. And this locality that we have to ride is one of the most exciting yet and very different to what we’ve experienced before – forests, mountains, even volcanoes and a glacier, are very different to the African deserts and plains we’ve previously ridden.”

Who are the riders?

As described by Michael, the riders are enthusiasts – non-professional riders who have won their positions in the GS Trophy through worldwide national qualifying events.

Michael explains: “The GS Trophy has always been about offering ordinary people, like you and me, the opportunity to take part in a large-scale enduro competition, something with a scale and excitement that’s world class.

“It’s about ordinary people attaining extraordinary goals. It is though a motorcycle competition at heart, so the finalists have had to ride to a high standard – something they’ve developed through learning and practice – and have been tested in a series of challenges that correspond to a standardised level throughout the ‘GS qualifier’ events held around the world. The idea is that they are well-prepared for the challenges that will face them in riding off-road across Patagonia. We want them to enjoy the experience.”

The full list of the finalists will appear in a further press document.

What are the bikes?

The competitors will ride a fleet of identical specially-prepared BMW F 800 GS motorcycles, while their guides and some BMW personnel will ride on BMW R 1200 GS Rallye and BMW G 650 Sertão motorcycles. Each F 800 GS has been specially prepared by Touratech, the motorcycle adventure and touring specialists.

Touratech Executive Director Herbert Schwarz: “Of course these bikes are made for offroad riding, but with regard to the tough conditions in South America we have added a few parts to give increased protection. These include engine bars, frame guard, wider foot-pegs with additional grip etc. Also all bikes are being fitted with Metzeler Karoo off-road tyres, which are perfect for the conditions participants will encounter.”

What will happen, where and when?

The BMW Motorrad GS Trophy begins on November 24 and ends on December 2. The start and finish will be just outside Temuco in Chile and the riders will ride a 2000km loop through the mountains that will take them into Argentina and back again. The exact itinerary and details of the tasks and challenges are to remain a well-guarded secret. . However, Tomm Wolf has offered an outline of the event:

“We will be traveling in what will be for the most part a mountain landscape, quite a different environment to the past two GS Trophy events – and again a good demonstration of the go-anywhere nature of the GS motorcycle.

“We have worked in conjunction with local guides to create a route that will ensure the riders will enjoy the incredible natural beauty of the region to the full. In part it’s very mountainous but there are also big tracts of native forest and broad land, the riding will be quite varied. This is a landscape that has me so excited – our competitors are going to be thrilled every day they put the ignition key into their own GS, it will be without a doubt the adventure of a lifetime as we always intended.”

BMW will ensure the public have the best opportunities to follow the GS Trophy. As well as accommodating a team of around 20 international journalists. . BMW will have their own team of journalists, photographers and videographers following the competitors every kilometre of the course. Daily reports, pictures and video clips will be posted on  gstrophy.com. BMW will also have on location a team dedicated to providing frequentupdates on Facebook and Twitter.
Share FacebookTwitterGoogle+ReddItWhatsAppPinterestEmail