Even Suzuki probably didn’t see this coming. Today, the V-Strom 650 is officially an adventure bike icon and one of the best-selling bikes in that genre. When it came out in 2004, though, it was probably seen as a risky gamble. In the U.S., Americans had never been particularly drawn to the whole Dakar bike image, and no one really took off-road excursions seriously for twin-cylinder street bikes. Over the next 13 years, it has become one of the few success stories to come out of the 21st century Japanese motorcycle industry. It not only capitalized on the growing adventure bike boom, but the V-Strom helped create it.

The latest DL650, which is a late 2017 model, represents the second big change in the bike’s history. Back in 2012, it got a new look and a number of updates. In 2015 the XT version was restyled to look more like the DL1000 with the beak-look fairing. Now, both the standard and the XT versions have that styling, along with some fairly substantial motor changes. On top of that, the 650 now has traction control as standard equipment. 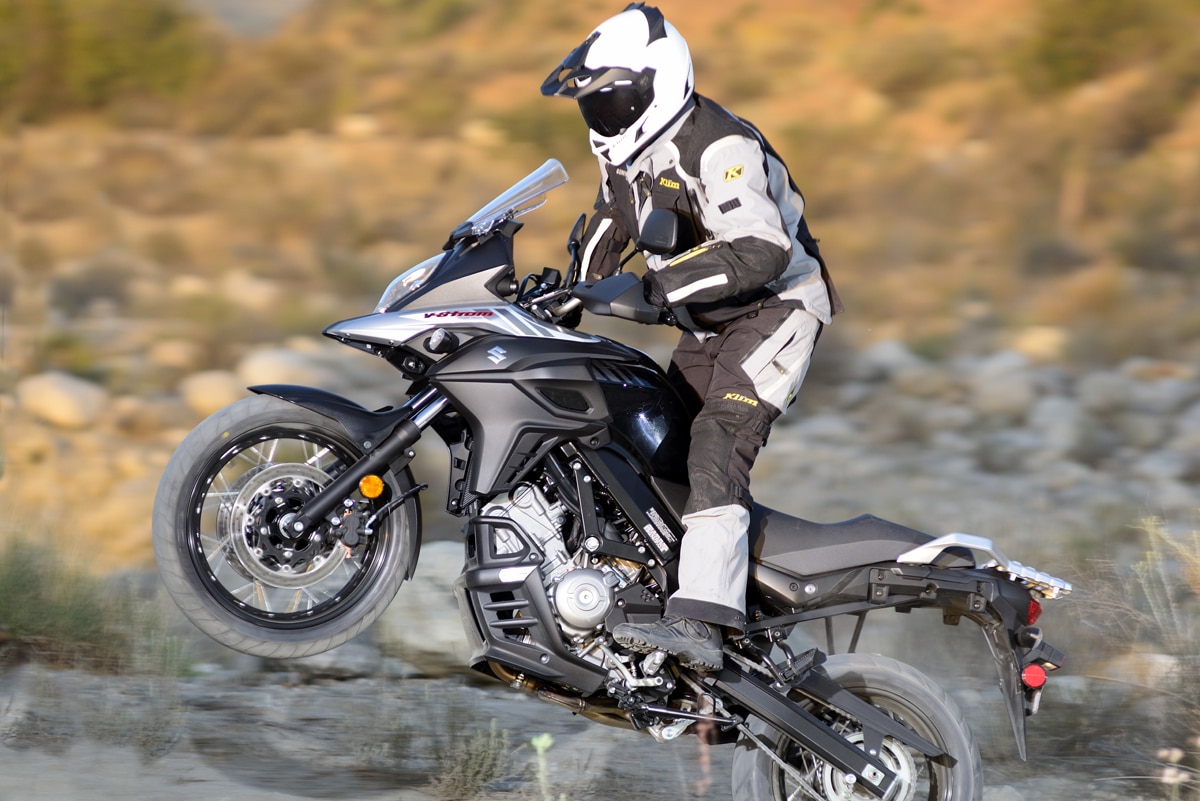 V-STROM TECH
In broad terms, the newest V-Strom 650 fits much the same description it did in 2004. It’s a liquid-cooled, 90-degree, V-twin, DOHC motor wrapped in an aluminum frame with a 17-/19-inch wheel combination. The riding position, more than any other single item, is what makes it appealing to the ADV rider. The seat/handlebar/footpeg configuration is very dirt bike-oriented. The bike has a sister model called the SV650 that’s strictly street, and the differences are obvious at a glance. The SV has lower bars and more rearward pegs, positioning the rider so he’s head down and knees bent. The 650XT puts the rider in an upright position and encourages standing up on the pegs.

Right from the start the 650XT’s motor has been a very close relative to the SV650’s motor, but the SV has been updated more regularly. Now the two bikes are in sync. The V-Strom got new cams, and the pistons have a low-friction resin coating. The cylinders have the SCEM coating, which is Suzuki’s version of Nikasil. The motor has a dual-spark-plug ignition like the DL1000. It also has new throttle bodies with dual valves. The main inlet is controlled by the rider, but there’s a set of secondary butterflies controlled by a servo motor and masterminded by a computer. The computer also offers some automatic assistance by raising engine rpm when you start to engage the clutch (a system called Throttle Body Integrated Speed Control). 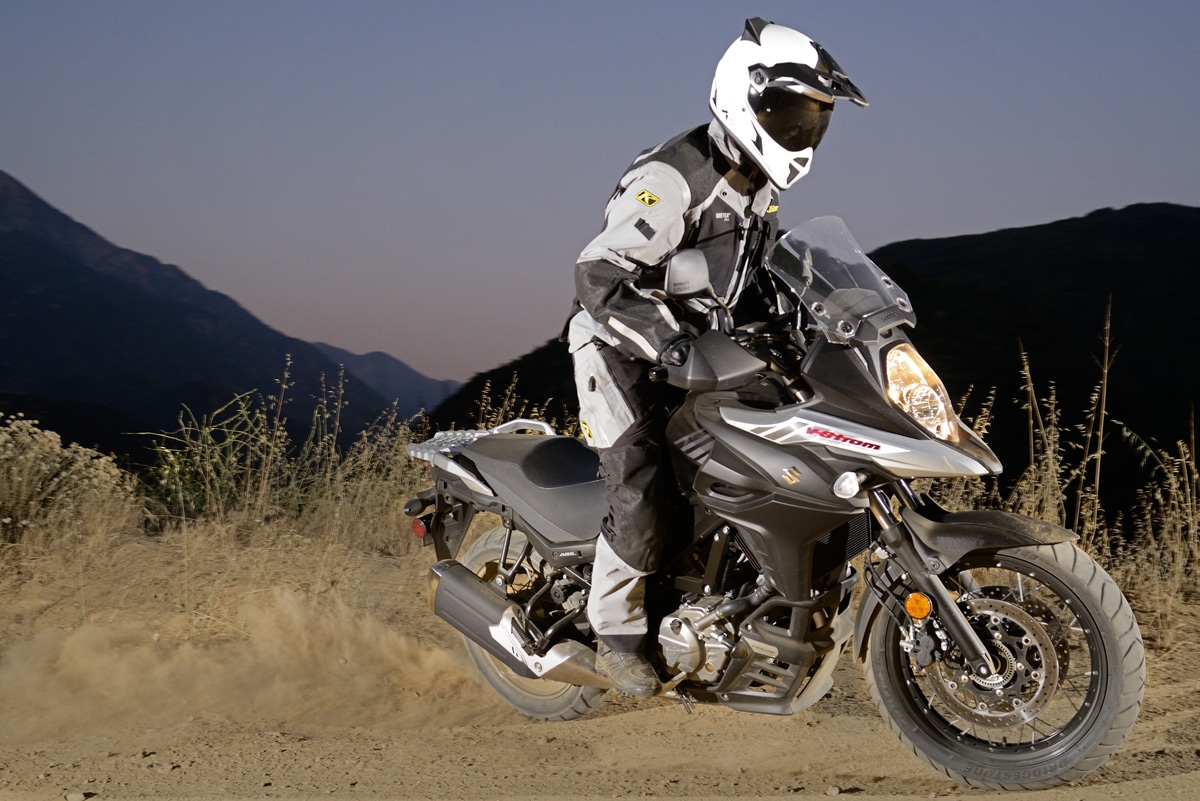 Electronic matters are even more center stage in the new traction-control system. Suzuki offers you two modes: TC2 for strictly street operation and TC1 for less intervention in the dirt. Additionally, you can turn traction control off altogether. Anti-lock braking is standard, too, but it is not owner-adjustable and is always engaged.
Both the XT and standard models have the same look now with the new fairing. Along with that comes a new adjustable windscreen, a new instrument cluster and a few other bonuses, like a panel-mounted cigarette-lighter-style power outlet. The version we tested was the XT, which has spoke wheels, handguards and an engine guard for an additional $500. That puts the price at $9299.

A BIKE APART
With any adventure bike, it’s important to know where it sits on the dirt-versus-street continuum. If a KTM 500EXC dual-sport is 90-percent dirt and 10-percent street, then the V-Strom is 90-percent street and 10-percent dirt. That might sound pretty “streety,” but even the most dirt-oriented twin-cylinder adventure bike would only score about 15-percent dirt on the same scale. In other words, the V-Strom is fairly capable off-road. The main things that contribute to that are the power delivery, the riding position and the relative lack of mass. That last point deserves some explanation. Official weight claims put the standard V-Strom 650 at 470 pounds with a full tank. That’s 30 pounds less than an Africa Twin and, in fact, lighter than the brochure weight of any other twin-cylinder adventure bike, even after you adjust for varying fuel capacities. You can only put so much credence in these claims, but the bottom line is that the Suzuki feels light and maneuverable. The Suzuki is long and low, and riders of average height can touch the ground without much trouble.

Next on the V-Strom 650 asset sheet is the motor. The 90-degree V-twin is sweet and torquey. On top of that, it sounds good and has a pleasant pulse. There’s something about the rhythm of a V-twin that works wonders on the human nervous system. It just makes you feel good. The bike has a noticeable increase in power this year, with its peak rating increasing from 64 horsepower to almost 70. The motor has always pulled well through the gears, but in top gear at freeway speed, it had uninspiring roll-on response. It would struggle to keep up with big adventure bikes on any long, steep grade. Now, that 10-percent increase makes all the difference. On a mountain ride with 1000cc big boys, it fits right in. 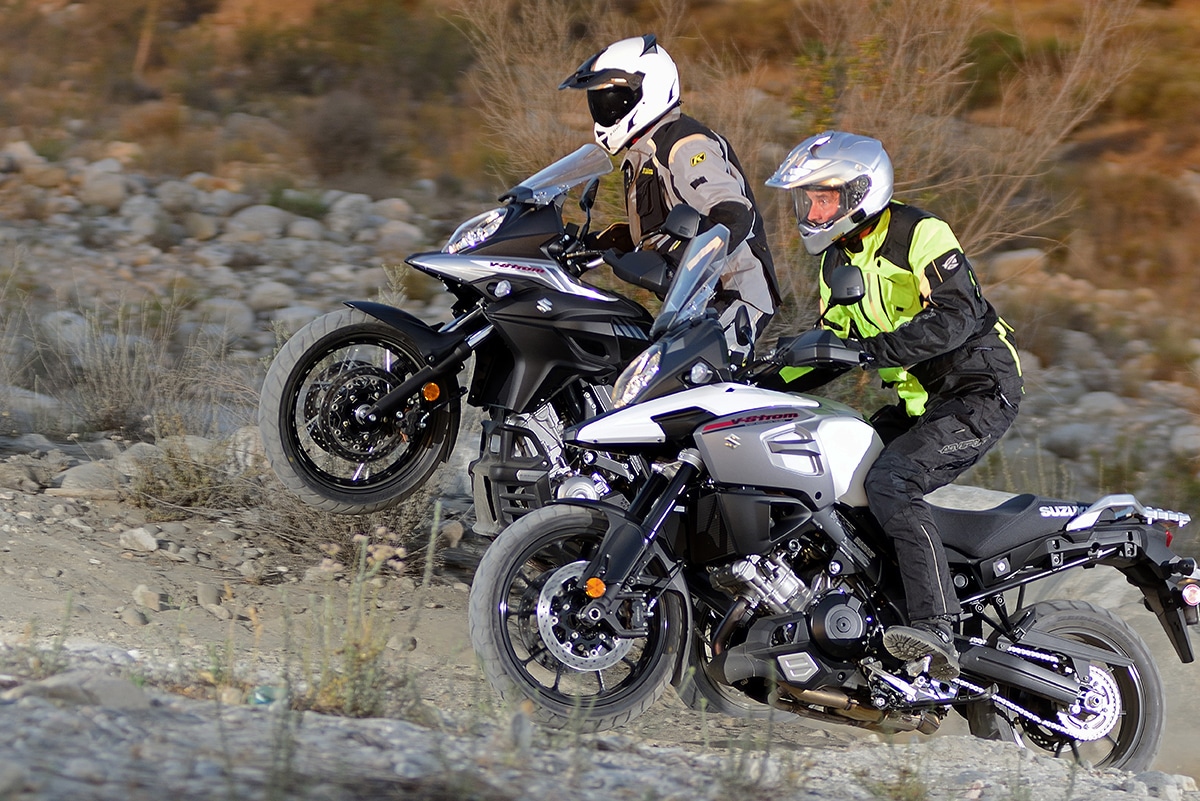 In the dirt, the DL motor has always been solid. It’s torquey for its size and has a smooth, slow-revving power delivery. There’s nothing nervous about the way it reacts to throttle commands, only a nice, friendly response with lots of evenly measured pulling power. Because of that, it already had kind of a native traction control, but the new electronic traction control is useful in some situations, such as wet pavement or sweeping, flat dirt roads. Suzuki’s first attempt at TC was on the 2014 V-Strom 1000, and the 650’s is much improved over that. On hills, sand or anything technical, though, it’s easily confused and best turned off. Suzuki still has a long way to go in order to catch KTM or Honda in the technology of practical off-road traction control.
In suspension as well, the Suzuki is fairly street-oriented. The fork isn’t adjustable, and the shock has only a preload control. Clearly, the low seat height came at the cost of travel. Rear suspension is actually a booming market for the V-Strom line; Progressive, Touratech, Ohlins and Race Tech all have their own solutions. On the street, where most of these bikes are used, there’s no real need.

ONE OF A KIND
One reason for the Suzuki’s success is that there’s nothing else quite like it. If you compare it to other 650cc twins with an off-road tilt, there’s only the Kawasaki Versys, which is very different. The Versys is much more street-oriented, more revvy and more like a little ninja. The Suzuki’s ergos are more dirt-oriented, and it feels like a larger, longer motorcycle. Prior to this year, the Kawasaki had an edge in power, although now the Suzuki probably has a little advantage, especially in torque. Suzuki also designed the V-Strom with more dirt-think. There are fewer parts in harm’s way, and even the styling suggests more off-roadiness. The Suzuki is also more expensive.

Chances are that most of the new V-Strom 650s sold in America will never go off-road—but they are ready and willing. The V-Strom makes a great transition bike for riders who think they might like the whole adventure bike thing but still want a bike that’ll get them to work. Even if Suzuki didn’t originally design the bike with the adventure rider in mind, adventure riders have always held the V-Strom in high regard. And that won’t change.