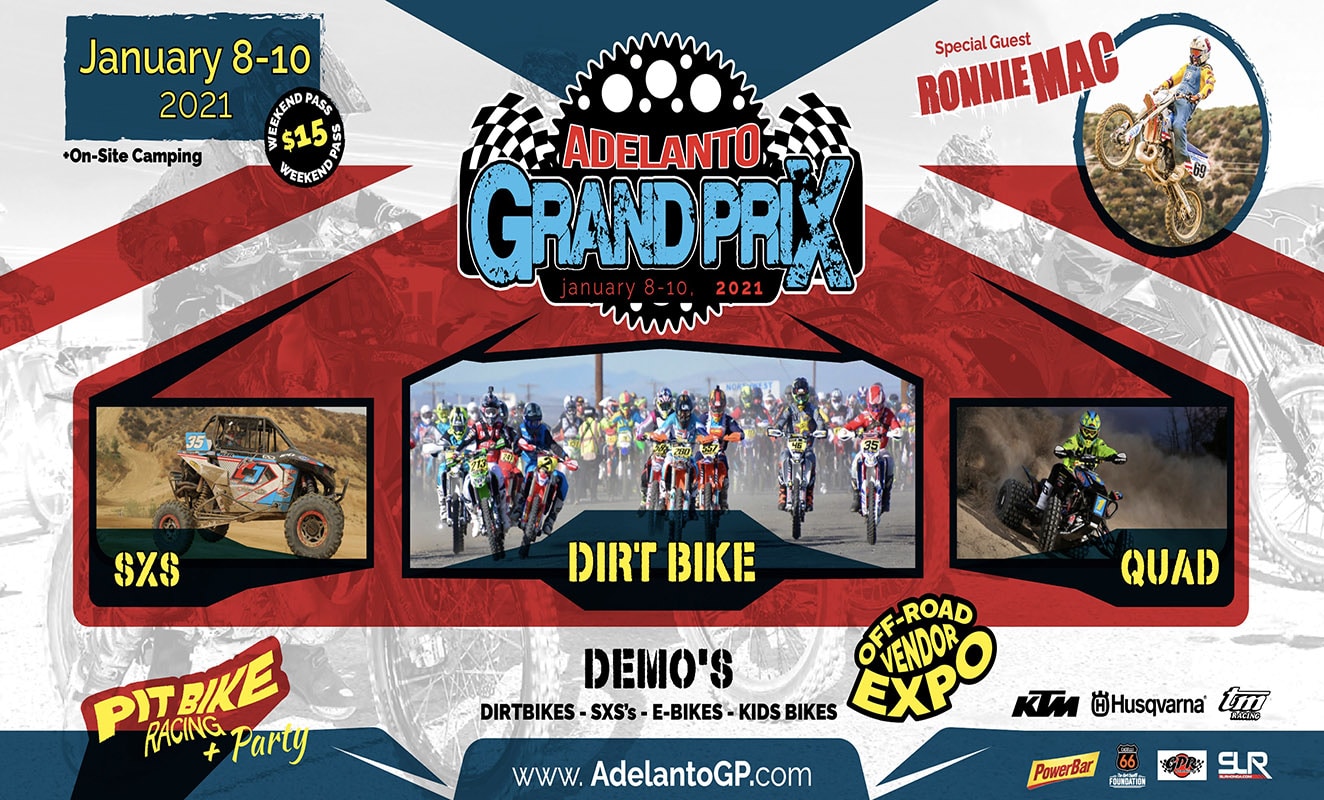 Adelanto, Calif. (August 13, 2020) – The Adelanto Grand Prix shifts into the planning phase of its epic 2021 event, announcing a transition in operations and leadership, adding American Motorcyclist Association Motorcycle Hall of Fame inductee Ty Davis as the director of operations for the legendary Southern California race.

“We’re putting together an all-star team of powersports professionals and industry partners to produce the iconic 2021 race festival.” said Adelanto GP Owner Darrel Courtney. “As a former King of Adelanto and coveted racecourse designer, Davis delivers a sizzle to the scene that ignites excitement in racers, spectators and sponsors. We’re expanding spectating areas into the desert, enhancing the event layout and introducing popular UTVs to the competitive lineup,” Courtney said. Coordinating with powersports industry event organizers, race organizers have identified the January 8-10, 2021 weekend for the 37th running of the race. The race attracts over 2,000 racers and over 10,000 race fans to the City of Adelanto, which adds nearly a third of its population for the annual event that began in 1982.

The operational shift marks the departure of So Cal MC and the AMA District 37 Big 6 Grand Prix Series, who was integral in resurrecting the event from a three-year hiatus. The nearly 30-year history of the event abruptly ended in 2010, following the financial woes of Desert Vipers MC, the former event organizer.

“So Cal MC was a crucial component to bringing the event back to life,” Courtney said. “The departure is mutually-amicable next move for the progression of the event. Whereas the sole focus of So Cal MC was strictly on the dirt bike race, there’s much more to the event than the race itself. It’s the scene, the atmosphere, the sidecars and now the UTVs as a finale to the race weekend.”

The eight-mile-long racecourse will boast many classic features that are central to Adelanto Stadium, including the famed mud jump. The effort also aims to safely reintroduce spectator access to the popular desert segment of the race.

“I’m energized by the opportunity and the industry buzz that has caught fire for the 2021 Adelanto Grand Prix,” said Davis. “We’re looking to create something sexy, from an epic racecourse to industry involvement of powerhouse brands and icons. We’re calling on those connections and polishing the concept of what this festival truly is.” Davis envisions a family-friendly event that honors traditions and embraces the excitement of industry trends. world class competitions and the thriving popularity of UTV racing.

“This is the largest American Off-road race west of the Mississippi River,” said Davis.  “There’s a reason why the factories and industry legends are already raising eyebrows and expressing newfound interest. It’s the fusion of old school and new school, the blend of fierce competition with the fan-driven experience. That’s what we’re all after.” Organizers are monitoring Covid-19 and actively coordinating with officials to realize success for the famed off-road race.