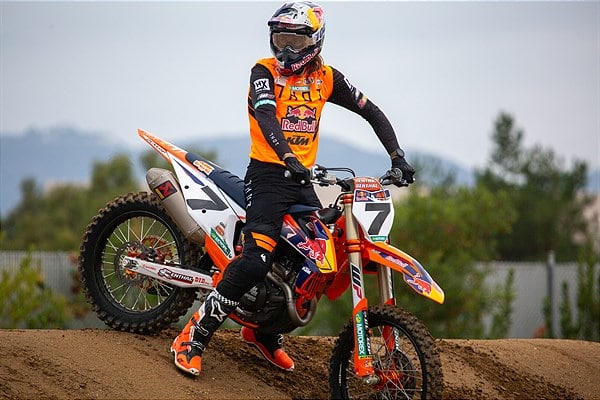 The Dirt Bike staff heard about this possibly happening during the Supercross season earlier this year and is not big news to industry insiders but KTM has made it official, Aaron Plessinger is now a part of the KTM Red Bull factory SX/MX Race team. See the press release from KTM below:

The Red Bull KTM Factory Racing team is pleased to announce the signing of fan favorite Aaron Plessinger to race aboard the KTM 450 SX-F FACTORY EDITION in the AMA Supercross and Pro Motocross Championships. Upon inking a two-year deal, Plessinger will remain with the team through the 2023 season with his much-anticipated debut taking place at the Anaheim SX opener on Saturday, January 8 in Anaheim, California.
Plessinger enjoyed a successful run in the 250 cc division, including a 250MX Championship in 2018 and countless race-wins in both series. Since moving into the premier 450 cc division in 2019, the 25-year-old has slated numerous top-10 finishes, along with one career top-five, and he is READY TO RACE onto the podium with an all-new program behind him in 2022.

Training with world-renown SX/MX trainer Aldon Baker at the elite Baker’s Factory compound in Florida, Plessinger will also work alongside mechanic Jade Dungey, who re-joins the Red Bull KTM squad for his first season together with AP.
Aaron Plessinger:
“I’m really excited for the opportunity to join Red Bull KTM and work alongside everyone associated with the factory team effort. To be honest, I’m pretty excited to bring a new vibe to the team. I rode KTMs a lot as a kid, so I’m looking forward to getting back to my roots and having some fun but this time on the KTM 450 SX-F FACTORY EDITION. Getting to train at Baker’s Factory with Aldon Baker, who has helped shape the careers of many champions over the years, is an opportunity I didn’t want to pass up. Hopefully I can push my fitness to new limits and better hone in my racing techniques by training alongside all the other top riders there.”
Ian Harrison – Red Bull KTM Factory Racing Team Manager:
“Aaron’s depth of talent has been on our radar for years but he has really come into his own more recently and lucky for us, during a time when we were in a position to bring him on-board for 2022. We were excited that during contract negotiations, he expressed interest in being a part of the full training program – a program we have worked very hard on for many years – and felt he would really benefit from it at this stage in his career. The gains he has already made not just on the KTM 450 SX-F FACTORY EDITION, but also meshing with the team and his mechanic, Jade Dungey, should keep the crew smiling, and on their toes, year-round. Aaron is a real character and a welcomed addition to our 2022 rider lineup.”
Aaron Plessinger
Share FacebookTwitterGoogle+ReddItWhatsAppPinterestEmail