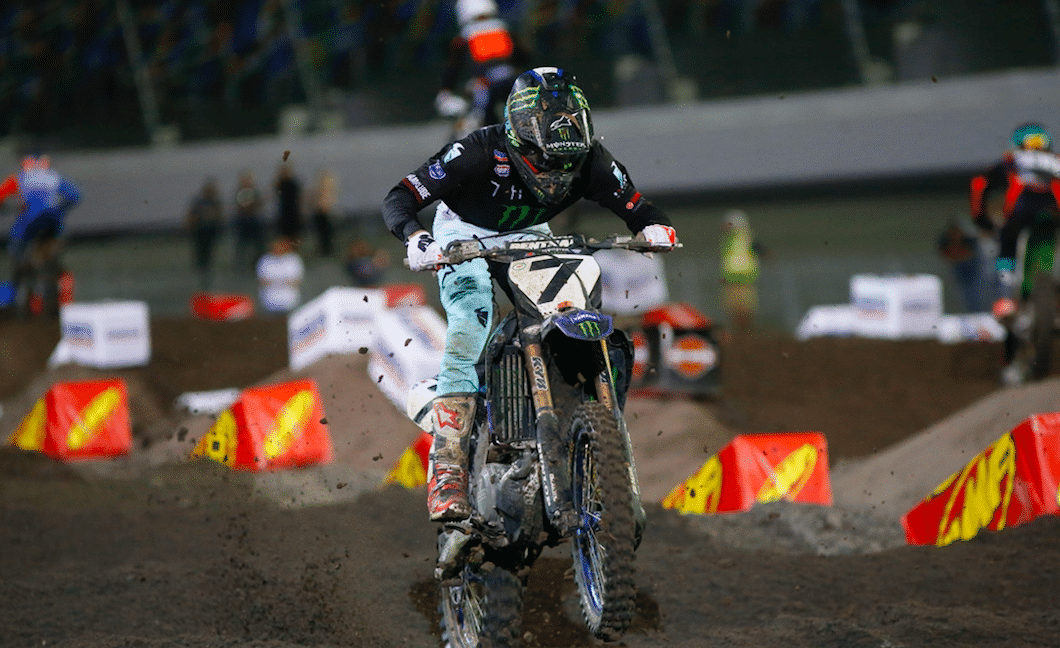 Monster Energy Yamaha’s Aaron Plessinger crashed hard in one of the rhythm sections on the Ricky Carmichael designed 2019 Daytona SX track. Plessinger came up short on a triple and was ejected from the motorcycle landing directly on his feet suffering a possible broken heel. See the crash and official release from Yamaha below.

Here is the official release we received from Yamaha Factory Racing:

On a track that was informally nicknamed “The Beast” due to its technical layout and sections that featured different kinds of dirt—loam, clay, and sand—Monster Energy Yamaha Factory Racing’s Aaron Plessinger crashed out in the early going of Saturday night’s 450SX Main Event at Daytona International Speedway in Daytona Beach, Florida.
With his teammate Justin Barcia still out of action while he recovers from a training crash suffered a couple of weeks ago, Plessinger was once again the lone representative for the Monster Energy Yamaha Factory Racing team.

After finishing seventh in heat race two, Plessinger lined up for the Main Event with hopes of getting a good start and being among the leaders. Instead, he was eighth out of the gate and had to play catch up, which ultimately led to him mistiming a massive rhythm section, landing hard on his feet and injuring his heel, which ended his night.
Plessinger was transported to the local hospital for evaluation; the team awaits further news on his condition.
The Monster Energy Yamaha Factory Racing Team is hoping to have Justin Barcia return to action next weekend for round 11 at Lucas Oil Stadium in Indianapolis, Indiana, Saturday, March 16.
We will have more on Aaron Plessingers condition later. For more 2019 Daytona Supercross race coverage CLICK HERE!
2019 Daytona SupercrossAaron PlessingerAaron Plessinger 2019 Daytona CrashInjury ReportInjury Update
Share FacebookTwitterGoogle+ReddItWhatsAppPinterestEmail