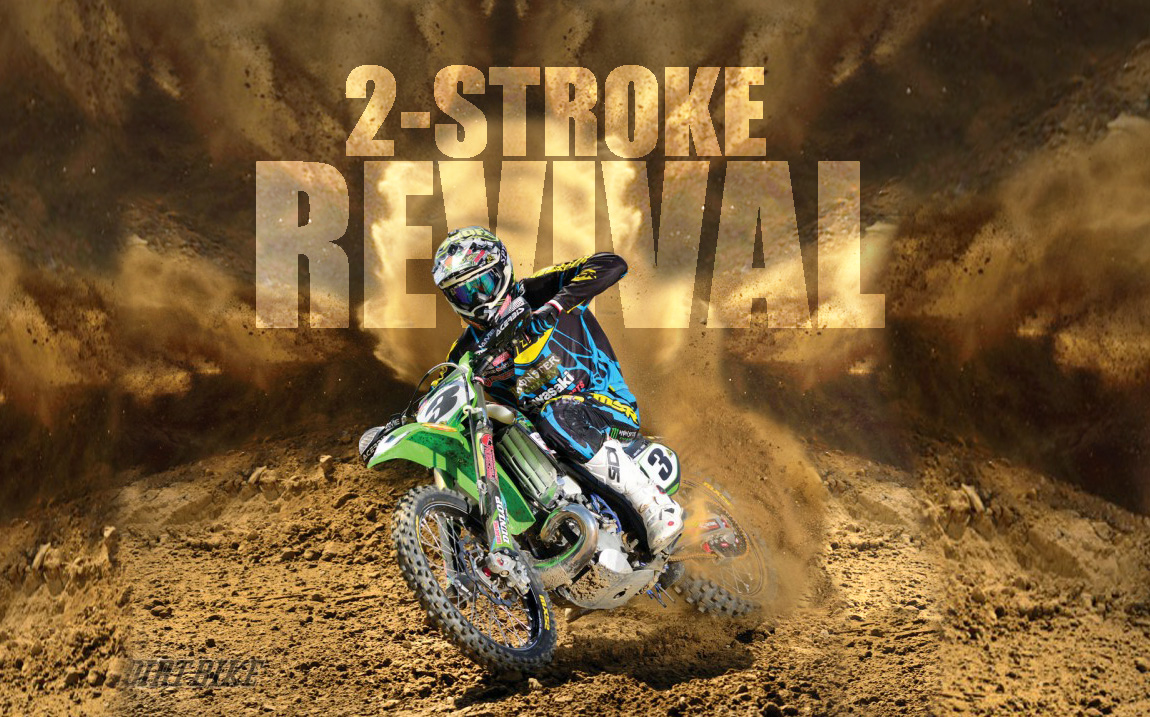 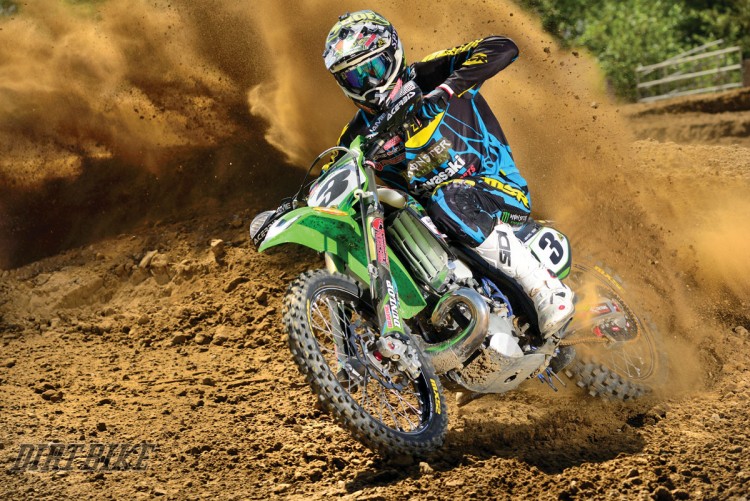 Last year Robby Bell, Ryan Abbatoye and Justin Seeds had a ridiculous idea. They decided to take a 12 year-old motorcycle to one of the toughest races in California. The result was even more bizarre.  Here’s how they transformed a forgotten motorcycle into the winner of the 10 Hours of Glen Helen, as told by Robby Bell himself. 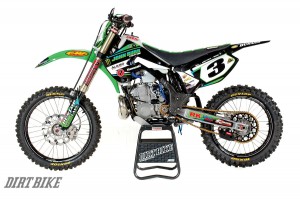 “We should race a two-stroke at the 10-hour.” I was standing next to Ryan Abbatoye when he said it. We had just completed the Glen Helen 6-Hour, and with the endorphins still in full flow, I didn’t give it a second thought.
“That’s the best idea I’ve ever heard,” I said. “One problem; where are we going to get a two-stroke?” Justin Seeds was standing right next to both of us, and what he said next would forever change the fate of his 2003 KX250.
“I have a two-stroke,” Justin chimed in. Ryan and I didn’t need an invitation; we didn’t even ask for permission.
I believe our next words were, “We’re racing it.” And just like that, a plan was set in motion for the three of us to race a 250 two-stroke at the 2014 Glen Helen 10-Hour.
So, the next question became, “What do we want to do to it?” With such an open-ended question, we knew we needed professional help. So, we decided to send the bike over to Precision Concepts and let them go nuts with the project. First on the list was definitely the motor, and since we’re all so spoiled by the power and torque of today’s four-strokes, we knew we wanted to get more pop out of the KX250. L.A. Sleeve was more than happy to oblige, boring the cylinder out to 270 and filling it with an LAPC piston. The addition of an FMF Fatty pipe, Powercore silencer and Boyesen intake reed would further enhance the bottom-end pull and overall power.
Suspension was going to be a big task as well, with three of us racing the same bike, each with our own riding style and personal preferences (myself definitely the prima donna in the suspension department). To give the bike an updated feel and better performance, we modified the front end using triple clamps provided by BRP to accept a set of 2010 KX450 forks that Justin had in his possession. Precision Concepts then re-valved the forks and shock to dial in the handling for the varied terrain at Glen Helen 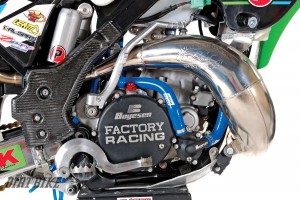 We knew there would be some singletrack added to the 10-Hour course, and with a pumped-up motor, the next concern became keeping the bike cool. We enlisted the help of Myler’s Radiator Repair and Supply, who hooked us up with a set of its Supercool radiators. We also needed an oversized tank and dry-brake receiver for quick pit stops, which IMS provided. Braking supplied the front and rear discs to satisfy our need for extra stopping power, and with multiple other additions, improving both the performance and “cool factor” of the bike, it was time to swing a leg over and see what Precision Concepts had created.
When we first hopped on the bike, we were reminded why we fell in love with dirt bikes in the first place. The bike felt so light and flickable on the track, it was easy to switch lines and to move around on the course and in the off-road sections. We felt like heroes throwing the bike into corners and whipping it over the jumps. The motor had plenty of torque off the bottom and pulled hard through the mid and top, so we didn’t have to be as precise with our shifting. The suspension handled really well, giving us confidence to push as hard as we wanted, and the additional bolt-on parts and modifications gave the bike the fit and feel of a dialed-in race machine. It was such a blast to ride that keeping the smiles off our faces was absolutely impossible. We couldn’t wait for the start of the 10-Hour. 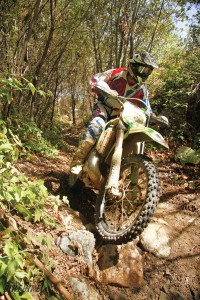 When it came to the race, the KX270 proved itself a more-than-worthy machine. The course was a combination of motocross, fire roads, singletrack, rocks and silt, and the bike excelled across the board. It even proved itself capable of soaking up a vicious impact, saving Ryan’s wrists and ankles when he over-jumped the tabletop on the front straightaway and landed on the face of the next jump from around 30 feet in the air. I still don’t know how he made it, though he did get a black eye from smacking the bars with his face. During the race, we also found ourselves with a unique opportunity: Glen Helen allowed for a spare bike to be put in impound (we chose my KX450 that I use in the WORCS events out here on the West Coast), so we were able to ride the KX270 back to back against its modern-day successor under race conditions. It was a great experience being able to compare the two, and it definitely made me miss the days when two-strokes dominated the starting gate. Though riding both bikes did confirm for me that the 450 is a faster race machine (our lap times were a little faster on the four-stroke, except for Justin, who was riding the wheels off the two-stroke), riding the 270 gave us a feeling of enjoyment that we wanted to keep experiencing: it made us feel faster and stronger, more of a superhero on the bike, which is the feeling that we fell in love with when we first started riding. The power was easier to handle as well, and I didn’t feel that the bike was going to get away from me if I hit something a little off-balance or lost my concentration, which is sometimes the case with the bigger 450. I also felt that the 270 inspired a little more confidence in throwing the bike around and a sense of control, something often overlooked in today’s obsession with speed.
We ended up taking the win at the 10-Hour and thoroughly enjoyed ourselves. We want to thank everyone involved in this project. Precision Concepts for building the bike, John Burr Cycles and John Seeds for helping with expenses, and all of the companies who stepped up and supported our effort with products. For me, in a world dominated by four-strokes, this experience showed that a two-stroke can still be incredibly competitive, but more than that, it rekindled my passion for riding a motorcycle. Though a 450 may be the bike of choice for racing at the highest level, when it comes to feeling more control while riding and bringing back that feeling of enjoyment when you swung your leg over your first motorcycle, I don’t think it gets much better than Precision Concepts’ KX270. Looks like I may be in the market for a two-stroke. 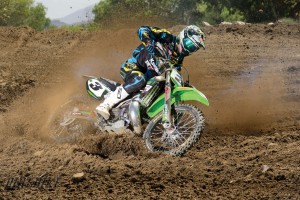 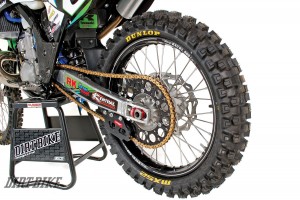