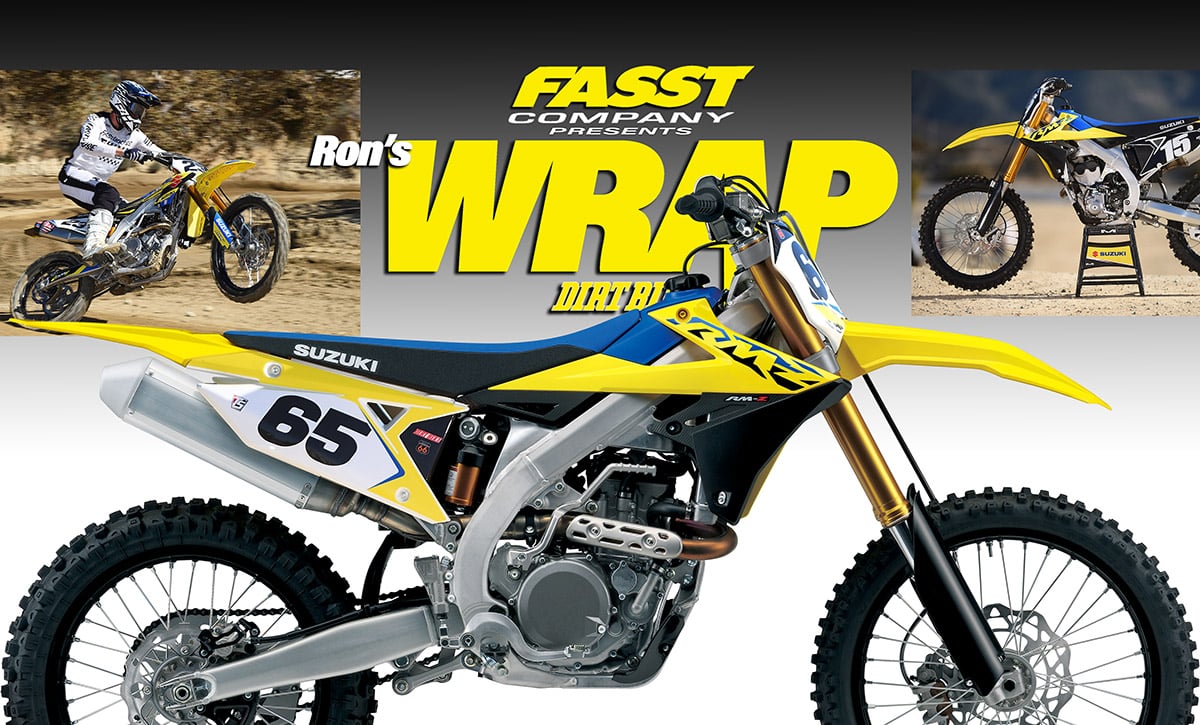 The Suzuki RM-Z line is back for 2023. The RM-Z450 and RM-Z450 haven’t been changed in years–it was 2019 that they last got mechanical changes, which were extensive for the 250 and minimal for the 450. Even then, those changes were a little underwhelming. Now, it makes us wonder if we really need such frequent change in the motocross world. We rode both bikes this week and had to confess that we still like them both. In fact, we really like the 450.

Back in 2018, the 450 got a big redesign. At the time, we were disappointed with three things:
1. It didn’t have electric start.
2. It was overweight.
3. The rear suspension was actually a step backwards. We still loved the power delivery and the overall handling. The next year, Suzuki updated the rear suspension on the 450 and gave the 250 a mostly new motor and the same chassis updates that the 450 got the previous year. It was actually more change than we expected, but it wasn’t enough to really get the bike back into the hunt. Now, we have to admit that we look at the Suzukis differently. They are considerably less expensive than the other bikes in their respective classes, and in our minds, that’s the biggest problem with today’s motocross bikes: runaway prices

The 2023 RM-Z450 has an MSRP of $8999. A 2023 Husqvarna FC450, for comparison, is $10,999. Right now there’s a promotion going until the end of the year. If you buy an RM-Z, you get a form to fill out and you will receive a Yoshimura RS12 exhaust system and RM-Army graphics in the mail. The Suzukis also come with a GET programmable ignition, even after the promotion ends. Yamaha is the only other company that offers wifi programming as a standard feature. With other manufacturers the hardware for this costs extra.

All of the price stuff is irrelevant if you don’t like the bike. Thankfully, that’s not the case. The RM-Z450 might not have won a Dirt Bike Magazine 450 shootout in recent years, but it never loses, either. Last year we had 12 bikes in our 450 shootout and some test riders rated it as high as second place. The reason we love it is because it’s super easy to ride. The power is almost perfect for amateur-level motocross. With very little modification, even pros love the power output. In peak power the stock Suzuki makes about four horsepower less than last year’s class champion (which was the KTM). That’s utterly meaningless to most of us. Telemetry results show that almost no one holds the throttle wide open for more than a few seconds a lap on a 450. The rest of the time we’re all trying to manage the power, and that’s where the Suzuki shines. It’s smooth and manages to find traction where other bikes struggle. This year we tried several different maps that were pre-programmed into the GET wifi system. In order to do this, you have to hook up the bike to a battery and a wifi transmitter in the pits. Then you use your smartphone to alter the spark advance and the fuel mixture, almost exactly like the Yamaha system. We tried one of the more aggressive maps and found that the Suzuki was still a sweetheart on the track. You can test for hours, but we will venture a guess that you’ll never make the bike a horsepower king. You’ll probably never make it a monster, either.

At one time we considered the RM-Z450 to be the best handling bike in the class. We can’t say that’s the case now. Other brands have closed the gap and all of them weigh less than the RM-Z. It also has given away its edge in suspension, primarily to Yamaha. But the Suzuki still has excellent cornering manners. It’s stable and has excellent front-end bite. In the suspension category, the RM is at its best on really rough tracks. It handles big hits well, but smaller chatter can give it a little grief. It’s stiff for the average beginner or novice.

The Suzuki RM-Z250 hasn’t stood up as well as the 450 over time. It was once a winner in our shootouts, but that was over a decade ago, and since then all the other 250Fs have pushed the horsepower envelope higher while the Suzuki made only modest gains. In peak horsepower, today’s RM-Z is about 5 horsepower down on the most powerful 250s in the class. In the 450 class, you can give away that much without penalty. It’s crippling for a 250. In other ways, the Suzuki is still competitive. The suspension is good and the handling is excellent. 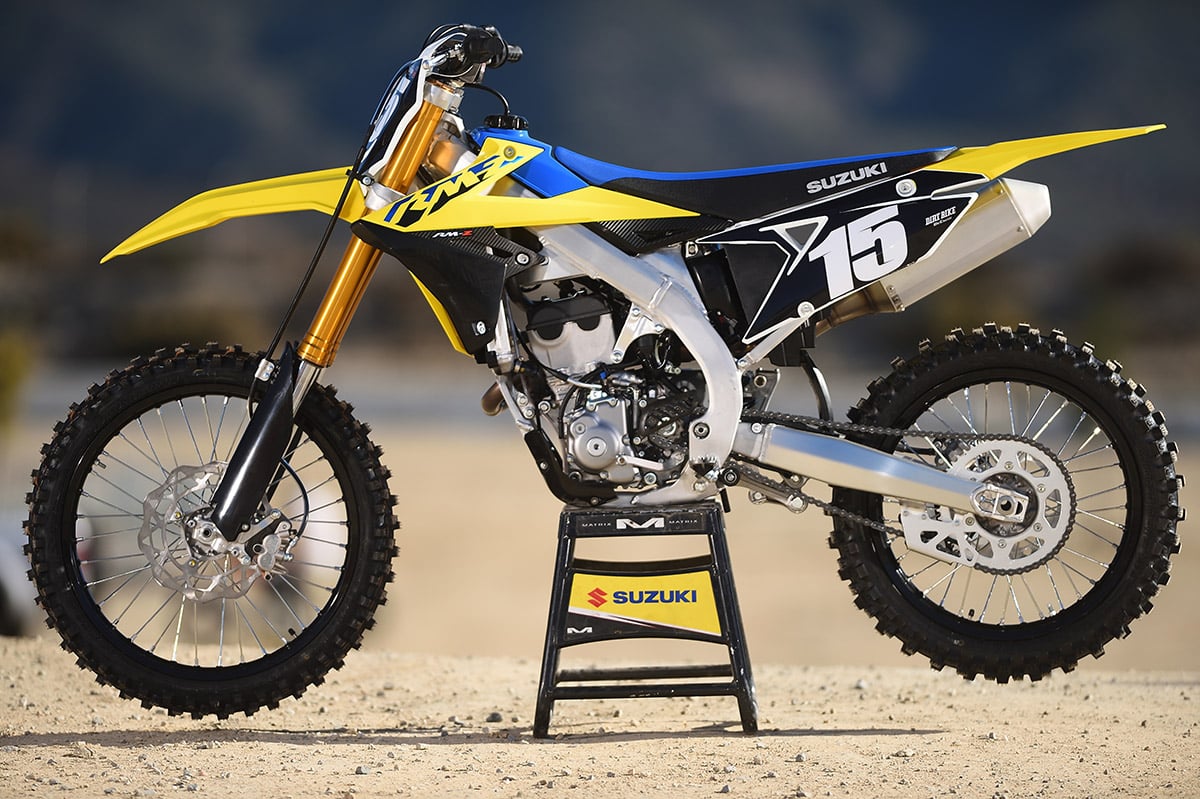 We know that there’s more power in the RM-Z250. We tested a Pro Circuit version of the bike a few months ago and discovered that it had closed the gap to the other 250s in the class. We also know that the Bar-X Chaparral Suzuki team has one of the most powerful bikes in the Pro field for Dilan Schwartz, Derek Drake, Preston Kilroy, and Carson Mumford. Keep in mind, though, that the price for closing the gap to another stock 250 is about $2500. The price for building a Pro-level motor is more like $9000. The RM-Z250 sells for $7899. Other 250s sell for over $10,000, so you have limited wiggle room.

We’re happy that Suzuki is taking a different approach to motocross these days. Offering the RMZs at a reasonable price is more important to the health of the sport than year-to-year updates that push prices higher and higher. Stay tuned for Dirt Bike Magazine videos of the Suzuki RM-Z450 and RM-Z250, coming soon.