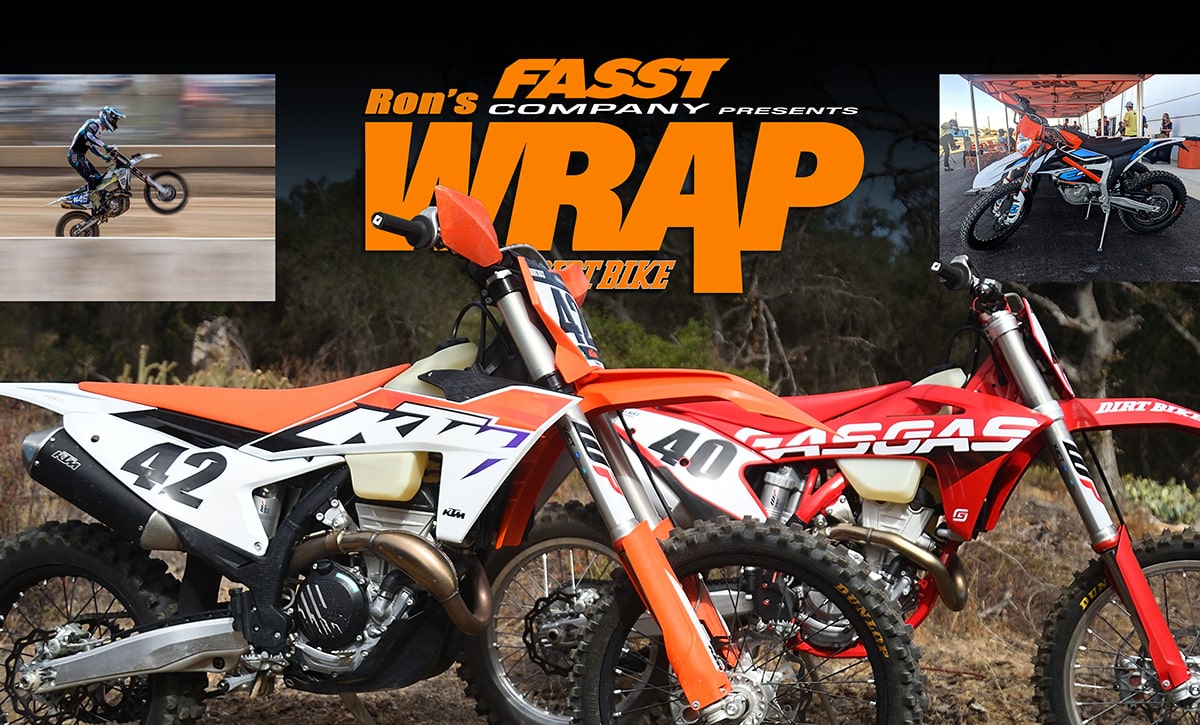 For a long time, our favorite size for an off-road four-stroke has been the 350. We didn’t really care which 350. All of the offerings from Austria were light, easy to ride and had tons of power when you needed it. The differences were noticeable, but not dramatic enough to give one a significant advantage. Now that’s changed. For 2023, KTM has a new platform for all its competition bikes. GasGas has stuck with the previous version, which gives us the opportunity to compare them back to back. We have a 2023 KTM 350XC-F and a 2023 GasGas EX350F just for that purpose.

First of all, you can’t ignore the fact that GasGas is seen as the more affordable line of the two. The price certainly isn’t low; it’s $10,799, but it’s less than $11,399, which is what the KTM costs. For that difference, the KTM gives you handguards, a skid plate, a map switch, machined triple clamps, a few name-brand parts and a resonance chamber in the exhaust headpipe. If you wanted to buy all those items for your GasGas, they would cost way more than the $600 price difference. 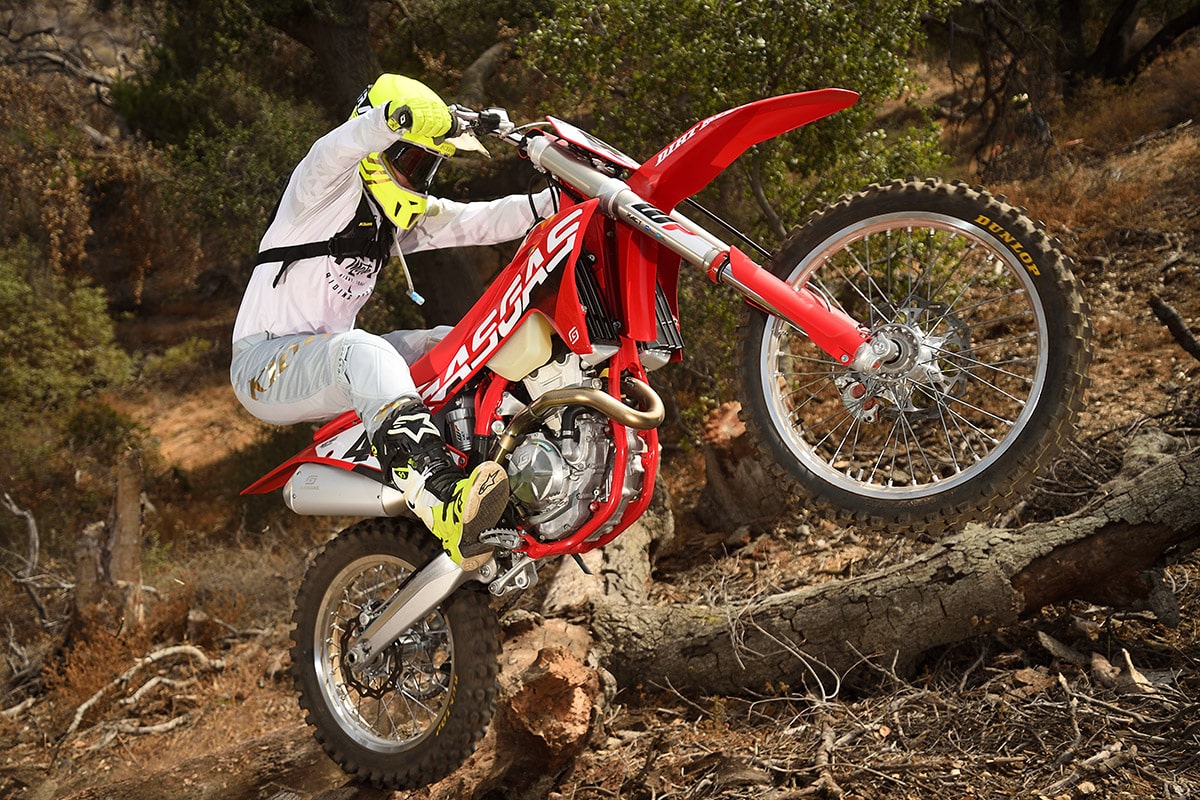 Much more important is the KTM’s new chassis and motor. Almost everything is different; the frame, the motor, the rear suspension, the bodywork, even the wheels and axle sizes. The only carry-over is the WP Xact air fork. Even that is different between the two bikes. The GasGas has softer valving and less recommended air pressure. 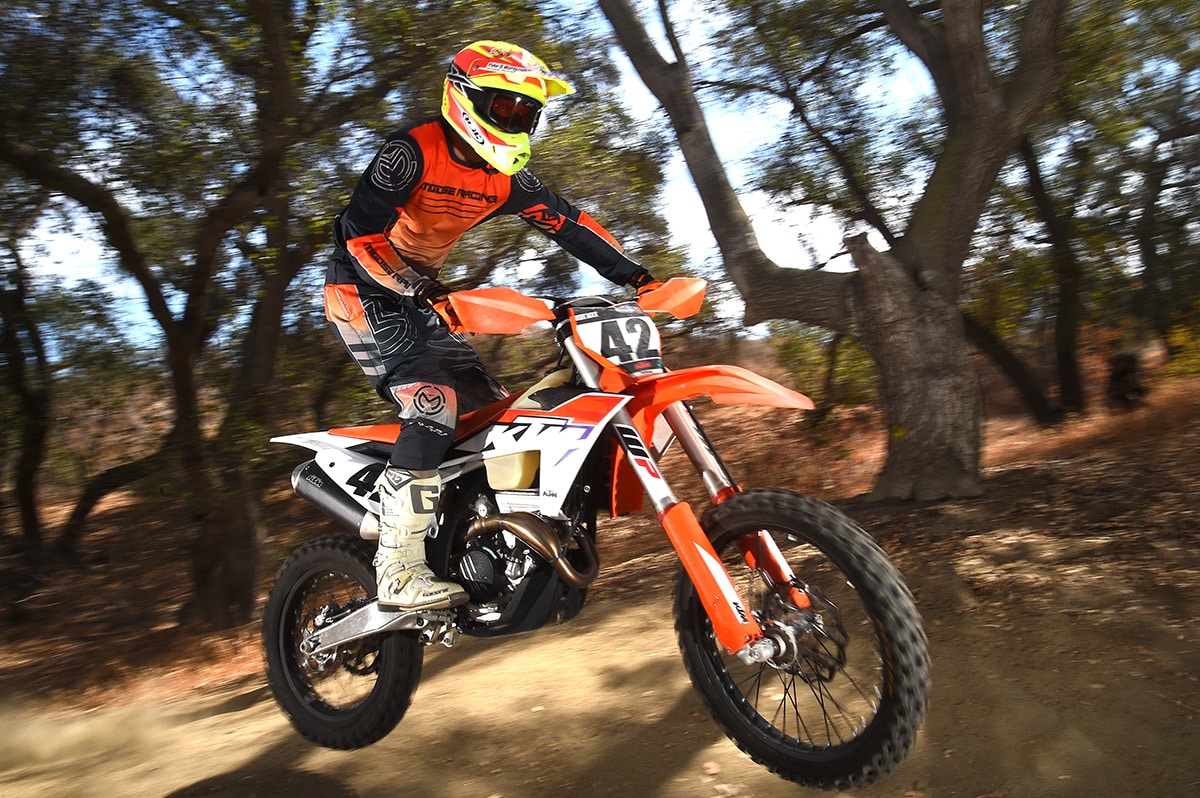 There’s a net weight difference between the two bikes. The GasGas weighs 224.8 pounds without gas on our scale. The KTM is 232. Part of that is the handguards and accessories, part is the fact that the new chassis is heavier. Just looking at the frame you can see how  beefy it is. KTM paid  a great deal of attention to frame rigidity and flex characteristics. The top of the KTM motor looks completely different, particularly in the valve train area where it’s wider and more squat. The cams are new, the piston is new, the crank is new and the compression ratio is higher (14.6:1 vs 14.2:1). KTM also messed with all the gear ratios in the six-speed gearboxes, the primary drive and the final drive. Bottom line: the overall gear ratios are more spread out on the KTM. First gear is about 12 percent lower. Second through fifth are lower as well, but by lesser amounts until sixth, which works out exactly the same as the GasGas.

We’ve spent a great deal of time on the two bikes separately, but only recently did we get the opportunity to ride them back to back. Up front, we gotta say that we love 350s as much as ever. We don’t understand why every motorcycle company on earth doesn’t offer one. The 350 is the missing link between the brutality of a 450 and the sleepiness of a 250F. Having said that, the differences between these two bikes are surprising. The KTM feels like more of a race bike, whereas the GasGas seems very trail oriented. That’s really not about horsepower. In that regard, the bikes are very close. The GasGas gives up a little on top and doesn’t run quite as cleanly down low. The KTM has the option of map two, which hits harder and later. The KTM also has traction control and Quickshift available on the handlebar-mounted multi switch. Traction control can be useful on hard-packed blue groove, but it’s not something we gotta have. Along the same lines, we like Quickshift because you can yank through the gears seamlessly without letting off the throttle–but again, it’s not something we really need. If you buy the handlebar switch for the GasGas, you will get two map options and traction control, but not Quickshift.

The biggest difference between the two bikes is the feel of the chassis and suspension. You would never guess that the suspension is made by the same company. The GasGas is a more cushy, plush motorcycle. The KTM feels hard-edged and stiff. You can feel the Supercross influence in the KTM’s new chassis, whereas The GasGas is truly a more comfortable trail bike. When you’re riding hard through big whoops, the KTM takes the hits slightly better and goes straighter. Does that mean the KTM is the better cross-country racer? Maybe, but we think you’ll have to work on the suspension to get the most out of it. The GasGas’s flexy frame is very forgiving of suspension. By taking some of that out of the picture, the KTM reveals some shortcomings of the WP Xact air fork. That fork’s greatest assets are adjustability and light weight, not comfort.

We’re still testing and riding these bikes and learning about them all the time. We will have more to say in the November print issue of Dirt Bike. 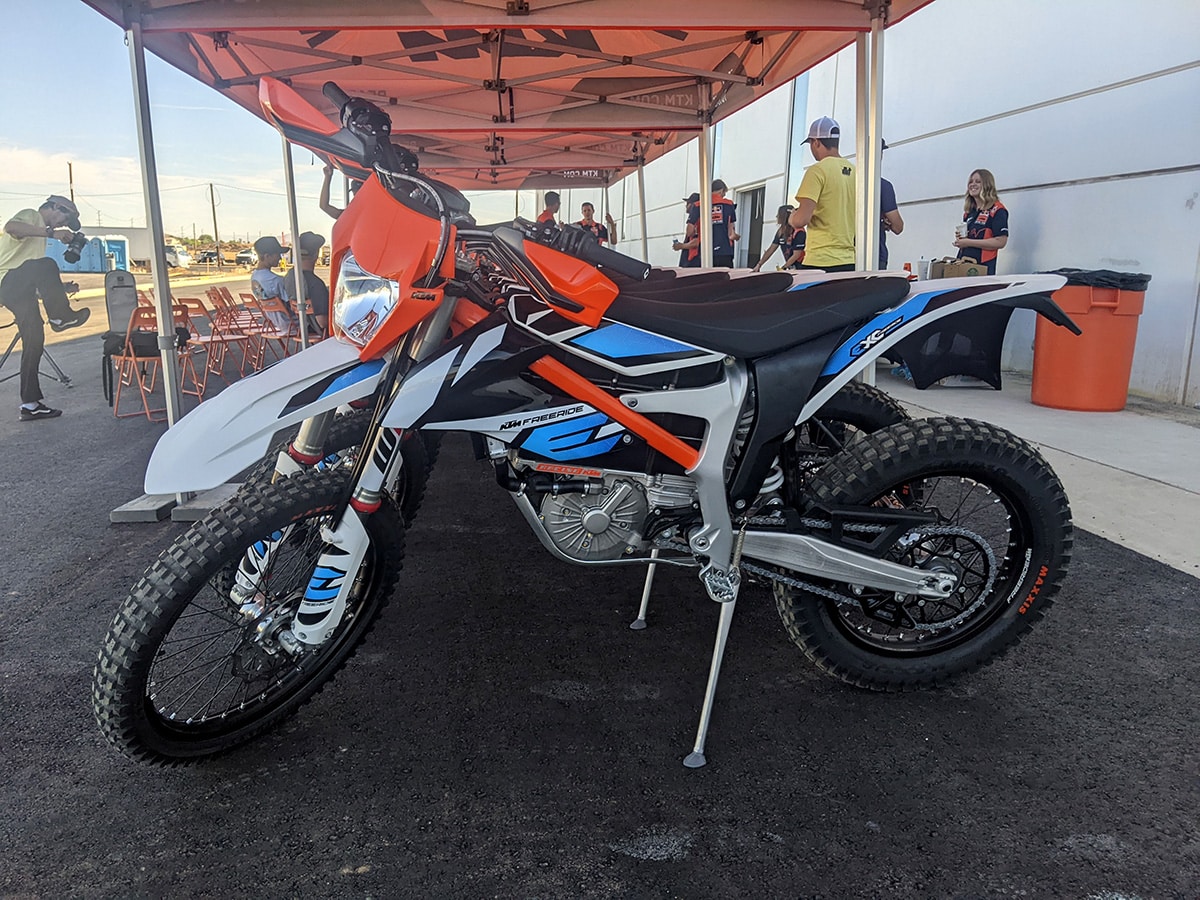 Yesterday we got to ride the KTM Freeride electric motorcycle. The first Freeride was made available in Europe 10 years ago. It came to the U.S. in limited quantity in 2015 and was redesigned in 2018. It’s designed to be a trail bike; KTM has no aspirations about racing the Freeride. The specs tell you a lot. It produces about 18 kilowatts of power which they figure is equivalent to 24 horsepower at max output. There are two lower power levels that allow you to extend your range. How much range? Hard to say. You can probably get two hours of moderate riding out of it. Recharging will take 135 minutes with KTM’s charger connected to a 230v outlet. This is one of the only electric bikes that we’ve ridden that has an easily replaced battery. You can swap it out in less than 10  minutes. The battery itself is around 65 pounds. The entire bike is claimed to weigh 245 pounds, although we haven’t verified that yet.

The Freeride doesn’t really look like anything else on the market. It’s narrow and tall. Suspension travel is around 250mm, or about 20 percent less than a traditional off-road bike. The bike has handbrakes; no clutch, no gear shifter. It has WP suspension, Formula brakes and soft compound Maxxis trial tires. It also has a headlight and a horn. It looks like it could very easily be street-legal. That certification hasn’t come yet, but we imagine it’s on the way. Right now this is the only bike in KTM’s entire line-up that is cleared for a California green sticker. It’s pretty clean of course. But it’s not maintenance free. It has a chain and even oil that needs to be changed every 50 hours. 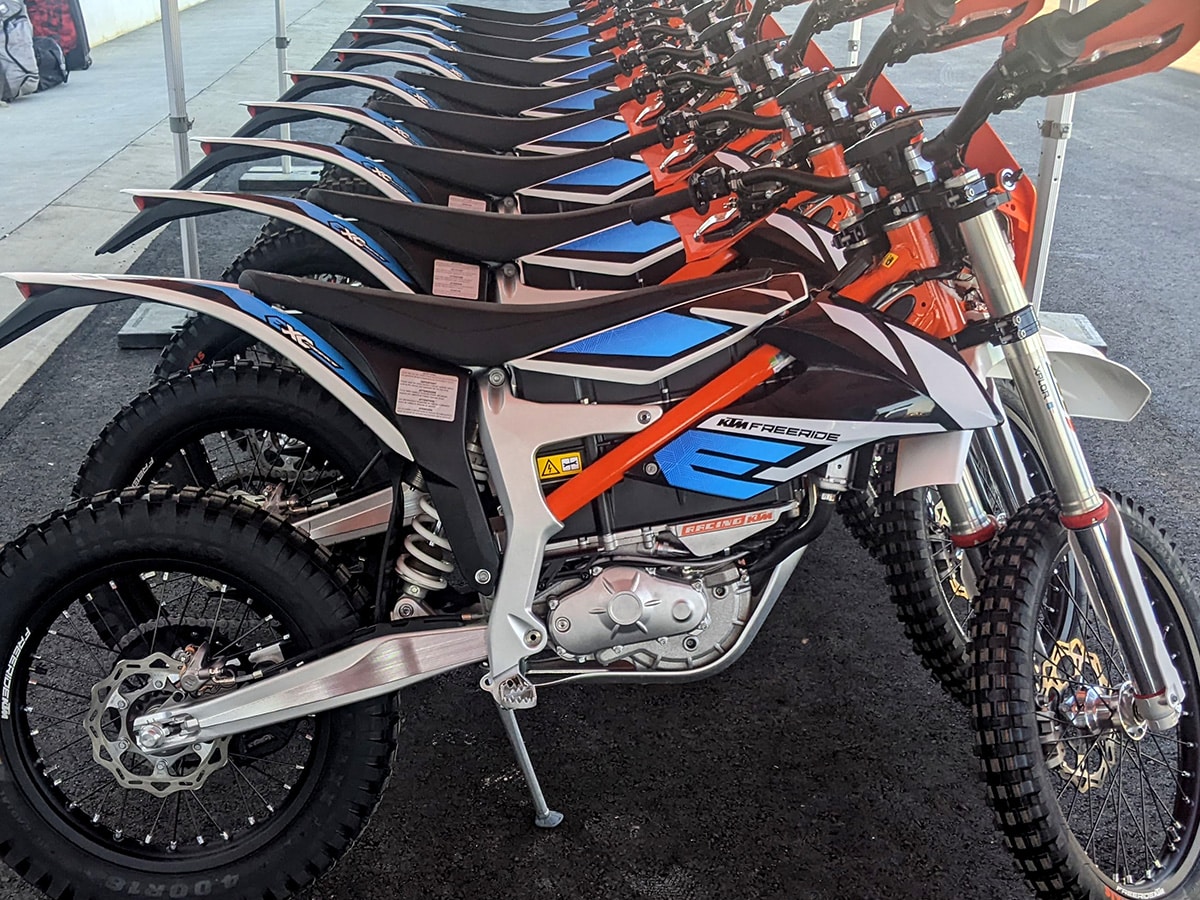 The coolest aspect about riding the Freeride is that it’s so quiet. We love that part. It opens up a whole new world of suburban riding areas. If you come across people on the trail, they might be a little confused, but they generally aren’t hostile. We know that there’s a stigma with pedal assist bicycles where the biggest critics are other cyclists. We haven’t seen much of that, but we know there’s an on-going debate about where electric bikes can and can’t ride. For our rides so far, no one seems to care. 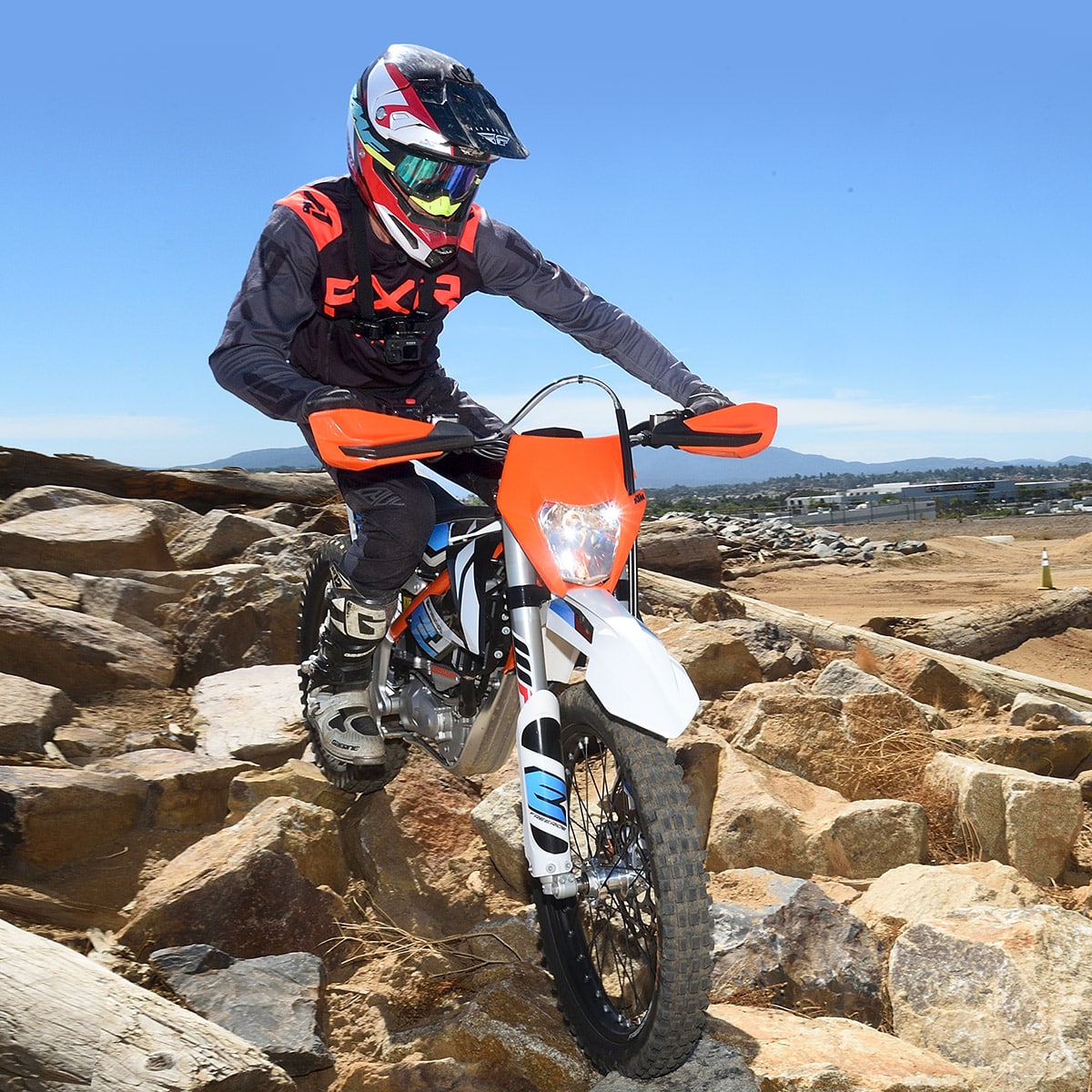 KTM likes to offer the free ride up as a good entry level bike, but we’re not so sure if that’s the best application. The power delivery is good for that, but it’s not an easy bike to ride. The seat height is taller than a typical motocross bike, and the bike is kinda heavy for beginners. But intermediate riders have a blast on it. The smooth power is great for tight trails and the suspension is plush, We even got to ride it around an endurocross course. Once you get used to the hand brakes, it’s actually pretty capable. The hardest things to deal with are the brakes and the super tight seating position. We can’t figure out why a bike this tall has such a cramped seating position. We will say it’s much more substantial than half-bicycle, half-motorcycle bikes like the Ninebot or the Segway.The Freeride is great for tight trails, but we have come to the conclusion that you need to have two of them. Its capabilities don’t overlap with many other bikes. The price of $11,099 makes that difficult. We have a lot more to learn about this bike. We want to confirm its range and performance, so check back with us. 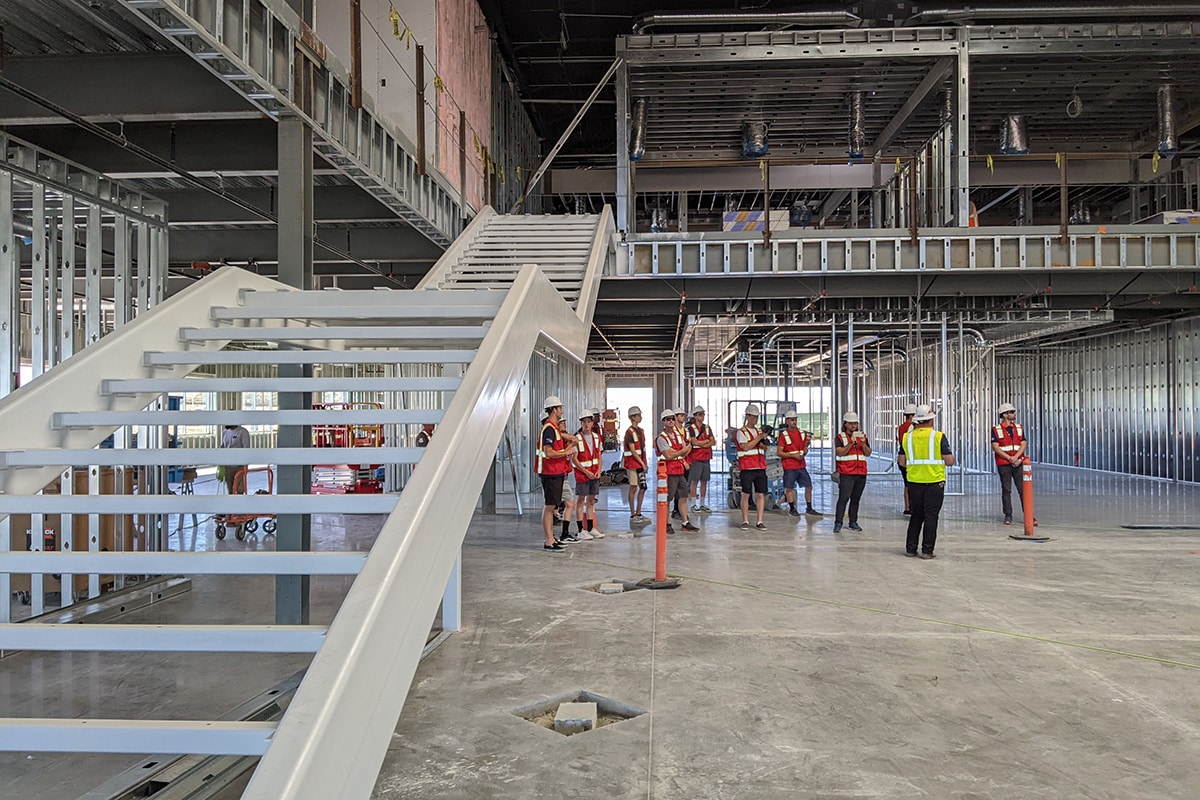 At the KTM Freeride intro, the press got to check out KTM’s new headquarters in Murrieta, which is under construction. Stephan Pierer himself came for the ground-breaking ceremony last year and now it looks like the construction company will give KTM the keys in January. The new facility will house KTM, Husqvarna, GasGas and WP. Eventually, Felt bicycles might also move in. It’s a massive complex next door to the French Valley Airport entrance. There will be dyno rooms, a parts warehouse and parking for all the race team big rigs. The Supercross and EnudroCross test tracks are within walking distance. Wow. 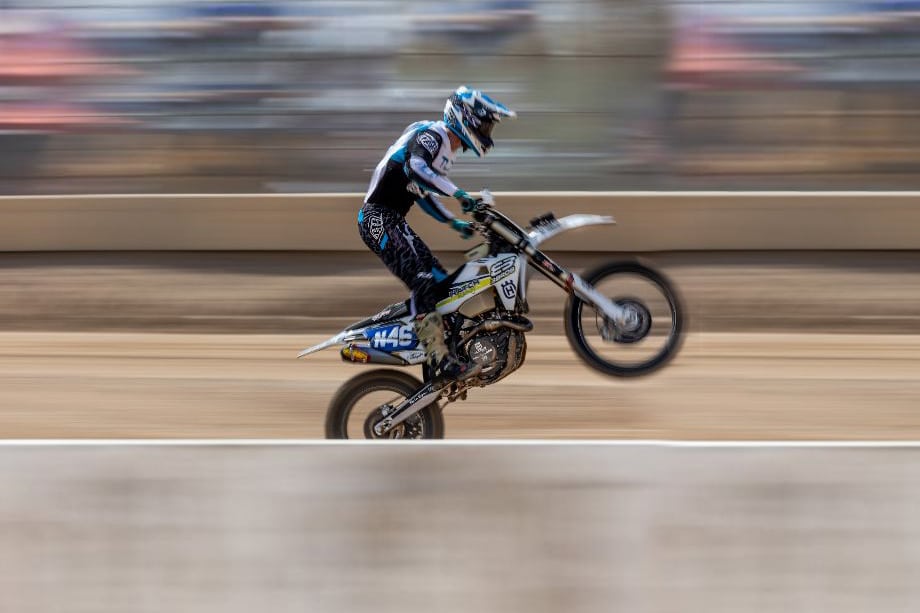 Vegas to Reno 2022 got underway today with the introduction of side by side Time Trials. The Time Trials, and the broadcast by RydeTV and the Method Race Wheels team, was well received by fans and racers. Bryan Folks, co-owner of Best In The Desert, commented, “Racers lining up side by side to battle for start positions was our unique idea. Thanks to our sponsor, Method Race Wheels, and the RydeTV production team running the Livestream, the fierce competition produced over six hours of non-stop action.”