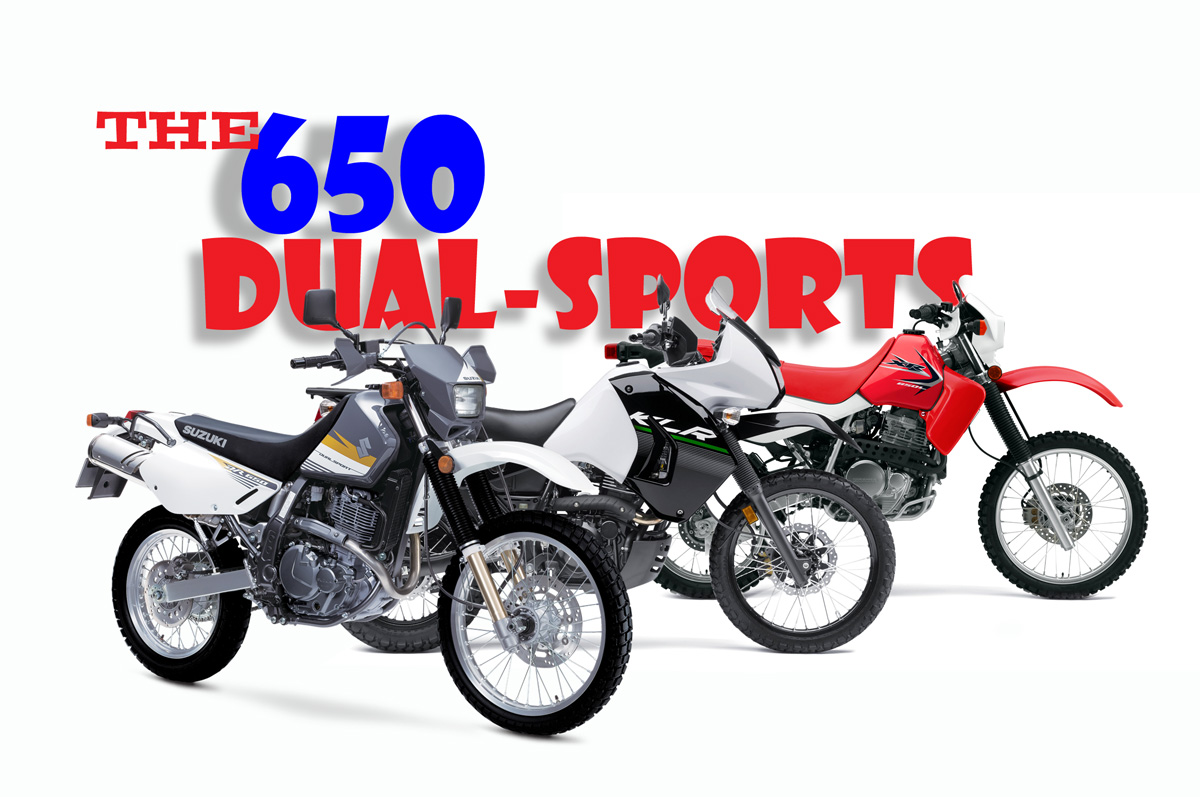 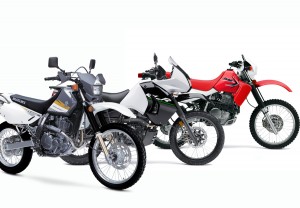 If you read a 650 shootout from 20 years ago, you might see a story that looks just like this one. It would include a Honda XR650L, a Kawasaki KLR650 and a Suzuki DR650S. But even if the bikes are similar, the message would be very different. In 1995, these bikes would be the extreme heavyweights of the dirt bike world, bordering on absurd. Now, they are the featherweights in a new category. These are the budget adventure bikes of today, and compared to the BMWs and the Super Teneres of the world, they are lean and trim. And cheap, too.

THE 400 POUNDERS
It’s rare that old hardware finds a second life in the high-tech, quick-moving world of off-road motorcycles. But that’s what happened here. You can thank BMW, KTM and Yamaha for expanding the previously tiny adventure bike category into a fairly large movement with even larger interest from its outer boundaries. There are thousands of aging dirt bike riders looking at bikes like the BMW R1200GS and wondering. But how do you get your boots wet in this arena without spending $15,000? Easy, you turn to the 650s—you might even have one in your garage already. In the old days you might have futilely tried to strip one down and make it lighter; but with this new calling, you’ll probably want to go the opposite direction with bolt-on accessories. These are the four main players in the 650 world:

HONDA XR650L: This bike was introduced in 1993 and was the most dirt-worthy dual-sport bike of its time. That wasn’t saying much back then, but the XR650L came from a good pedigree. It wasn’t far removed from the air-cooled, four-valve XR600R that Scott Summers was using to win GNCC races. Admittedly, Summers was a freak of nature and could ride the old 600 better than anyone on earth, but Honda still made a serious effort to make the new dual-sport version of the XR a legitimate dirt bike. It gained about 50pounds with the addition of an electric starter, battery, a steel tank and various horns, blinkers and such. The 650’s extra bore came with a decrease in compression and milder state of tune. But the suspension and geometry were basically the same as those of the dirt version.

The 650L has been unchanged all these years. Everyone assumed that the liquid-cooled, aluminum framed XR650R that came out in 2000 would eventually morph into a dual-sport

replacement for the old air-cooled bike, but it never happened. The original 650L has remained in the line while other models came and went. Today’s L still weighs the same as it did in ’93; 328 pounds without fuel.
KAWASAKI KLR650: This bike was more or less forgotten in the dirt bike world for most of its long life. The original KLR650 was a weird bird

back in the late ‘80s when it arrived. It had a massive fuel tank, a small fairing and what appeared to be a very high-tech motor. It was liquid-cooled, DOHC and had four-valves. Even though off-road guys were initially disappointed by the bike, it was embraced by the street crowd because it was light by their standards, it had an electric starter and that little fairing actually worked.

Kawasaki tried to woo the off-road market with a more dirt-oriented version of the bike in 1993. It disappeared quickly, and the KLR lived on. Finally, the bike got a remake in 2008. That’s when the frame-mount fairing arrived along with new body work. Then the Kawasaki really came into a second life. Between the 6.1 gallon tank and the wind protection, the adventure bike guys discovered it and a wealth of aftermarket parts were developed. Now, the KLR can be anything you want it to be. Without any accessories, the Kawasaki’s dry weight is right at 400 pounds.
SUZUKI DR650SE: The Suzuki DR650S has been around for almost as long as the Kawasaki KLR, but it never found such a warm home with any cult or sub-group. The Suzuki’s air-cooled, SOHC motor wasn’t as sophisticated as the

Kawasaki’s, but it always made more horsepower. Initially, it had a very large tank, just like the KLR, but no fairing, only an oversize headlight cowling that offered no wind protection. The Suzuki DR was always positioned right between the dirt-ready Honda and the street-oriented Kawasaki.
In 1993 the DR650S became the DR650SE with the introduction of the electric starter. That was a huge step forward. In 2001 and 2006, the bike received updates and was restyled. Along the way, the big fuel tank was reduced in capacity twice. The Suzuki’s dry weight is 383 pounds.
IN THE DIRT
When you get all four bikes off-road, it’s easy to spot the dirt bike. The Honda is perfectly at home, while the others merely tolerate the dirt. Weight is the biggest factor; the XR’s a good 60 pounds lighter than the Kawasaki, and you feel every pound. It also has real dirt suspension. In fact, the Honda’s fork works very well even by the standards of dedicated off-road bikes. Its weakest point is its motor. The Honda is the slowest of the four. Its top speed is acceptable because of super tall final gearing, but at the other end, first gear is so tall you have a hard time on anything resembling a real trail.

It’s also clear that times have changed since the Honda was developed. We actually raced a stock XR650L in the Baja 1000 back in 1993, and it seemed perfectly natural at the time. But by today’s standards, the Honda’s ergos are in the stone age. You sink endlessly into a wide, soft seat, the fuel tank rises straight up and the bars are oddly low. We suppose we could get used to it—we did back in ’93.
Next highest on the dirt meter is, predictably, the Suzuki. It weighs less than the Kawasaki and it has more power than the Honda. It also has a very tall first gear, but the motor is a little meatier down low than the Honda, so it can disguise its gearing better. But it can’t compare in the suspension department. The Suzuki only has about 9 inches of travel. We have to give it a little credit; it does the best it can with those 9 inches, but it’s not in the same league as the Honda.

The Kawasaki’s suspension rates about the same as the Suzukis, but the KLR’s extra tonnage is both an advantage and a disadvantage here. The weight can actually help make for a cushy ride, but there’s no getting around the fact that you’re dealing with more than 400 pounds. You never seem to get past the sheer size of the bike. The Kawasaki might be smaller than big twin-cylinder bikes like the Yamaha Super Tenere and the Honda NC700X on paper, but it just seems just as big in the dirt. The KLR motor, on the other hand, doesn’t feel very big at all. It might be modern in description, but the power output is only slightly better than the Honda. The Kawasaki’s gearing is lower, which is helpful off-road, but the bike revs oddly high at freeway speed.
Other dirt details: the Honda and Suzuki have good footpegs, while the Kawasaki’s are tragic. The Suzuki’s bars have a flat, low bend that we haven’t seen since the earth’s crust was still warm. All the seats are poor for a variety of reasons.
ON THE ADVENTURE
It’s silly to rank these bikes strictly on their dirt performance. In the big picture they’re all lame compared to a KTM EXC. Where they’re meant to shine is on long, continent-crossing adventures, and that’s where the Kawasaki really struts. Two things give it a huge advantage: the massive tank and the frame mount fairing. Any time the speeds get over 50 mph on the dirt or on the street, the Kawasaki rider sits back in uncontested comfort while the other three battle the wind. The Kawasaki even has excellent handguards. The Suzuki has good ones too, but the Honda’s are small.
In range, the Kawasaki destroys the other three. That’s why you put up with that 6.1 gallon fuel drum between your legs. It can be the tanker for the others. The actual fuel mileage isn’t all that good. In fact, it’s the worst of the three, typically just over 50 mpg on the road. Most of the fault goes to the low fifth gear. The Honda and Suzuki are slightly better, but have microscopic fuel tanks (3.4 for the Suzuki and a measly 2.8 for the Honda). You have to plan your trip around gas stops. Or have a Kawasaki nearby.
All three have acceptable vibration levels for single-cylinder bikes. The Suzuk is the smoothest and the Honda is a little shaky, but you don’t really think about that on long rides.
OUTFIT ME
Virtually everything is available in bulk for the Kawasaki, with Honda and Suzuki items only slightly more scarce. Here are some recommendations:
Kawasaki: Get new footpegs the day you get the bike. We’re using a set from Twisted Throttle, along with their crash bars. The stock luggage rack is great and accepts a wide range of aftermarket items. So don’t get rid of it. Our bike has Kawasaki’s own soft saddlebags. We also like the tall windscreen from Kawasaki. Seat Concepts makes a much better saddle—the stocker is good when it’s new but the foam breaks down quickly.
Honda: A fuel tank is at the top of the list here. Acerbis, IMS and Clarke all make good ones. The bike is old, though, so most of the fuel tanks on the market look slightly dated. For the Honda, it seemed best to go with Wolfman Expedition soft bags, which can be removed quickly and easily from side racks. That way the bike can be converted into more of a pure dirt bike when a trail calls to us.
Suzuki: We built up our DR650 for a test in the March, 2012 issue. It got an IMS fuel tank and a set of Moose racks with Pelican hard luggage. We also installed a DG pipe, a Seat Concepts saddle and a set of AME hot grips. On the top of things we plan to do is install some kind of wind screen. We know that the fork-mounted variety can perform as well as the Kawasaki’s stocker, but we’ve seen some we would like to try (TCI, for one, which is the dirt brand of Turbo City).
BIG PRICES
All of these bikes are priced well. The Suzuki is the lowest, at $6499. Next is the Kawasaki ($6599), then the Honda ($6690). The next bikes up the food chain are twins like the Honda NC700X ($7499) and the Suzuki V-Strom 650 ($8549). There are also two other singles that are players: the BMW G650GS ($7895) and the KTM 690 ( $10,399).
When you look at the overall price landscape, the Kawasaki is even more stunning. It’s so cheap, you almost have to have one if you’re a hardcore adventure rider; it could be a back-up for your BMW 1200GS. It’s good to know that if you crash it, you can’t do more than $6599 of damage.
The Honda and Suzuki are a little left out in the adventure bike world. The Honda is still a good dirt bike, but the competition in that world has moved far beyond even its capabilities. The Suzuki Sits somewhere between those two. It has the best motor, but it’s not the dirt bike the Honda is and not the street bike the Kawasaki is. To go in either direction, you’ll have to finish the job.

This test was originally published in May 2013, and updated with current pricing.
To read the 2015 Dual Sport Buyer’s Guide, click here.

THE BEST OF DAKAR

EXTREME DUAL-SPORT RIDING ON A KTM 1190