60 THINGS YOU SHOULD KNOW ABOUT THE 450 OFF-ROAD BIKES 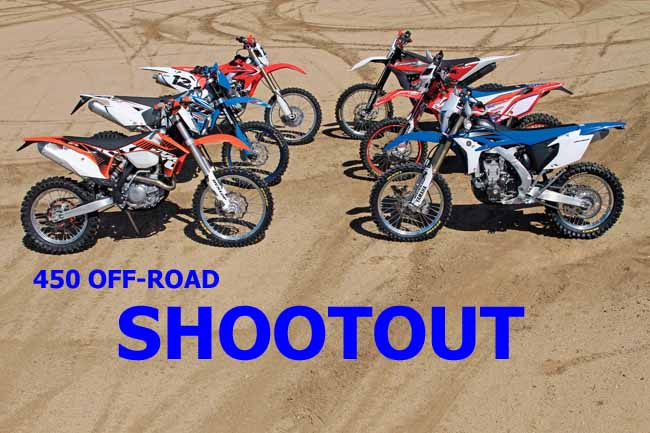 We’re sure of it now; the off-road motorcycle market has a teenage girl at the wheel, and she’s popping Ritalin, texting her BFF and eating comfort foods while she’s trying to navigate the most difficult economic conditions in years. Those of us who are along for the ride can only hold on while the market accelerates, hits the brakes, turns around and goes backward so rapidly that no one knows which direction we’re actually heading. Just look at the recent history of the 450 electric-start off-road class. Honda stopped making the CRF450R three years ago while KTM developed a new bike. Beta jumped into the market just as Kawasaki and Suzuki left. Then, Yamaha launched an all-new bike. Honda came back, and TM returned to the U.S. market, and then Husky dropped its 450 off-road model. By comparison, Mr. Toad is an old lady.
For 2012, it looks like things might stay still long enough for us to at least take a class picture. We gathered five available bikes that meet the same general description. They are all off-road 450 trail bikes with electric start. We added a sixth, just for kicks—Husqvarna’s TC450 motocrosser is actually much better on the trail than on the track—then we gave them all Dunlop MX71 tires and started riding them into the dirt. Afterward, we found we had learned much about America’s most confusing and diverse class of dirt bikes. Here are roughly 60 facts that come to mind.
HOW THEY FINISHED

What you should know if you read the rest of the story
We expected the new KTM to win from the outset. KTM has won every 450 off-road shootout since 2000, and the new XC-W is the best one ever. Imagine our surprise when the Beta came out of nowhere and nearly toppled the reigning king. In some situations, the Beta is a better bike. It’s faster, it handles great, and it has components that are as good as or better than those of the KTM. The standard Beta RR is priced identically to the KTM, and the Beta Factory Edition tested here offers great value for its additional $800.
In the end, though, the KTM nibbles the Beta to death by doing better in so many small ways. The KTM is lighter. The KTM holds more fuel and has more range. The KTM starts more easily. The KTM has stronger brakes, and so on. Once again, it emerges as the best overall package.
Next on the list is Yamaha’s new WR. It’s $1000 less expensive than the KTM, and if you spend that money wisely, you can have an incredible bike. We wouldn’t be surprised if some motocross riders started showing up with modified WRs; they probably handle better than the YZ450Fs. In the end, it’s handicapped by excessive weight and Yamaha’s high internal standards. Don’t get us wrong; we like quiet bikes, but we don’t understand why the Yamaha has to be so much quieter than the others.
The TM is a very special machine. We’re not surprised that its price is so high. We’re amazed it could be built at any price. The frame and chassis components are the work of true artists. But in sheer performance, it offers no significant advantages over the others. Plus, it’s an outlaw on public land.
As for the Honda, we’re happy it’s back, but it’s actually more overpriced than the TM. When the bike was first introduced in 2005, it was $6999. Shouldn’t it be amortized by now? We all know it has the potential to win at any level, but potential doesn’t pay the rent.
Next year, all this could change. In fact, we’re almost certain it will. The 450 off-road class will continue to suffer through market-driven mood swings. The bikes will change, and so will the participants. But, we know one thing: we’ll never go into this comparison expecting any one bike to win. Those days are gone.