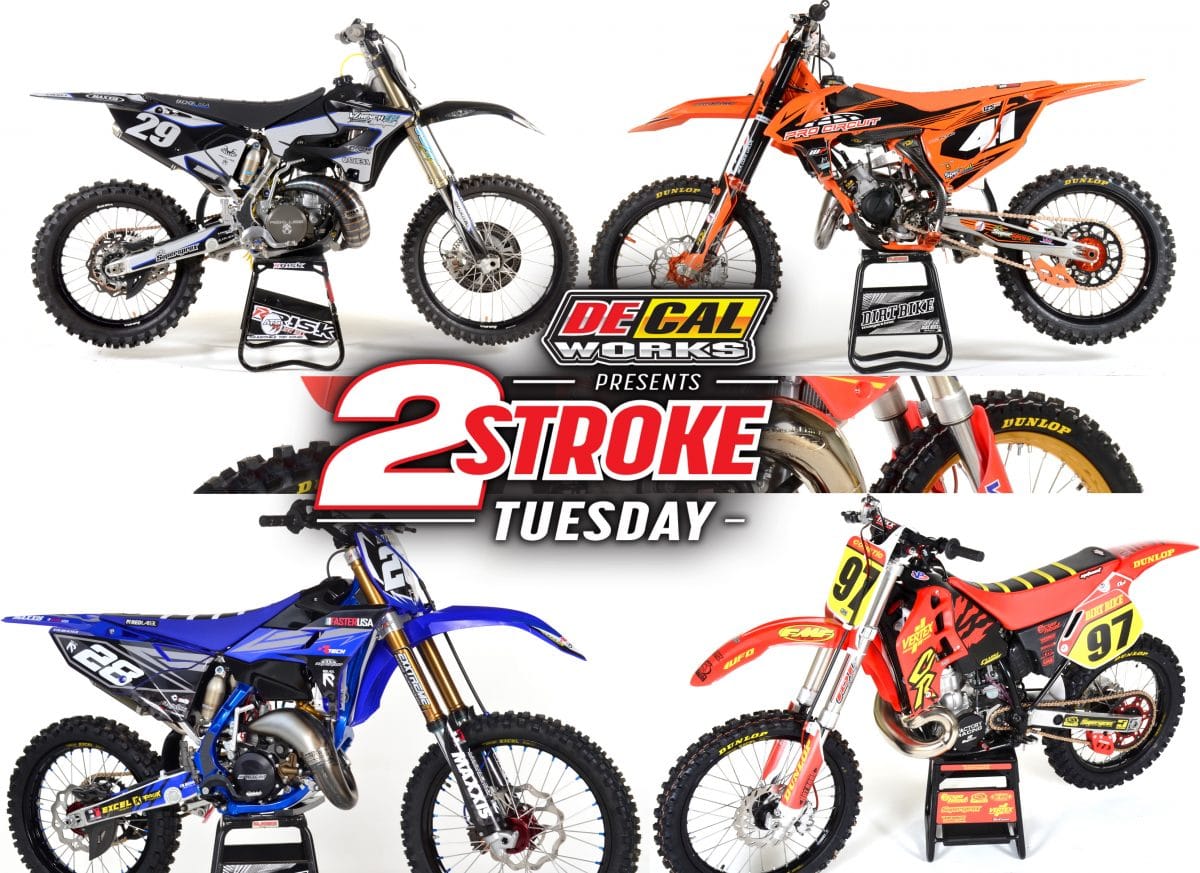 On this week’s Two-Stroke Tuesday brought to you by Decal Works we take a look at five of our favorite MX 2-Stroke projects . Who remembers our Wrench Motorsports YZ300, FMF CR125, Pro Circuit KTM125, Faster USA YZ125 or the 1995 CR500 rebuild? They are all here! 2-Stroke History is all about the mighty CR125 bloodline and there is an exclusive link to our newest website feature 2-Stroke Theater at the bottom of this post.

The concept for this build came from a bench racing session in the garage and had some influence from last years Red Bull Straight Rhythm event. The bikes of this era had character and we teamed up with some industry leading companies like FMF, Faster USA, Specbolt, Decal Works, Race Tech, Wrench Rabbit, Dunlop, UFO Plastics, Supersprox and ODI to see if we could recreate some of that magic.

There’s no better project bike than a Yamaha YZ125. First, there are a million of them out there on Craigslist, eBay or any yardsale. Second, it’s been basically the same bike since 2005. You can find an 18-year-old bike and when it’s done, pass it off as a new one. In this case, we started out with a $1500 2006 model and handed it over to Colin and Vince at Faster USA.

The 125cc two-stroke is alive and well at all levels of racing, with the 125 Dream Race and theTwo-Stroke World Championship are drawing huge numbers of participants and spectators alike. AMA Pro Racing even jumped on the bandwagon with its 125 All-Star events at select nationals last year. We decided to build a KTM 125SX for test rider Robbie Wageman to burn some premix and have some fun.

“Honda will never build a two-stroke motorcycle.” Soichiro Honda made that statement in the late ’60s and meant it. He had built his company on the four-stroke design and was doing quite well with it. Yet, a few years later, Honda released a two-stroke that changed the world. The 1974 CR125M was produced in greater numbers than any motocross bike ever built.

Check our latest website feature where it’s all about premix burning machines in action. 2-Stroke Theater is a weekly feature that is full of Travis Fant edited videos of new OEM offerings and highly modified projects bikes as well. Check out our latest post that was all about off-road projects. CLICK THE IMAGE ABOVE.