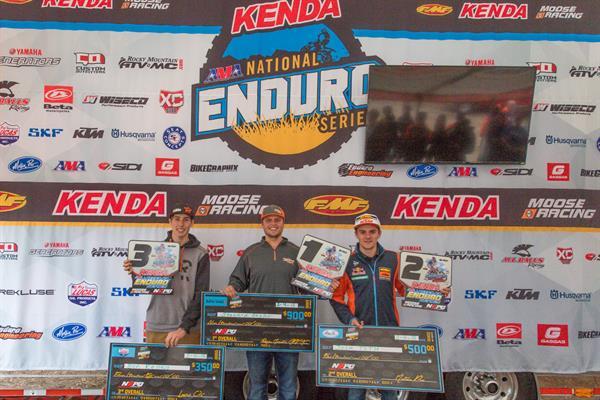 With temperatures on the chilly side and light rainfall throughout the morning, Sumter’s sandy-course presented favorable riding conditions for most of the day. However, the rainfall ended up posing a challenge to many riders as visibility issues came into play during tests three, four and five.

Baylor commanded the lead early on as he won the opening test, followed by a series of consistent top-three finishes (2-1-1-3-2). Toth finshed 3rd in test one, which set the tone for a consistent day of racing from there (1-2-3-1-1). Baylor and Toth would swap test-wins throughout the rest of the afternoon, each rider taking three for the day. However, it was Baylor who held the upperhand in the end as he finished 18 seconds ahead of Toth in the overall time.

Toth: “Round 1 was great! I rode well all day and stayed in control and consistent, which is pretty tough at the enduros. I am super excited to have such a good race today and feel so comfortable on the bike. It definitely brings me a lot of confidence moving into the season. I’m very happy with the team and the bike so I’m looking forward to getting the season underway!”

Despite a few challenges along the way, Bonanza Plumbing/Trail Jester/KTM’s Ben Kelley was able to put himself on the overall podium by the end of the day. Kelley maintained a top-ten position in each of the six tests, where he finished as high as 3rd place in tests two and three, along with a top-five finish in test five.