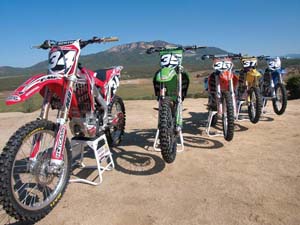 Let’s make it clear up front: 2012 has been a great year for 250F riders. All the bikes were amazing in some way. The KTM 250SX-F became the first electric-start 250 motocross bike, the Yamaha got a new frame and more horsepower, the Honda was refined, the Suzuki was still on top of its game, and the new double-injected Kawasaki was flat amazing. Who could ask for more?
We could. It’s our nature. We can’t look at any dirt bike or group of dirt bikes without the wheels turning and plans forming. In the 250F class, horsepower is still the limiting factor. While the typical 450 has more muscle than the average rider can handle, even the best-running 250Fs can benefit from a little more steam. That’s why overbore kits are so popular. In fact, they’re more common than you realize. The guy next to you on the line? Probably a big fat cheater. The guy next to him? Probably a cheater with bad hygiene and a suspicious rash.
We decided to gather the 2012 250Fs one more time to see how they work with oversize pistons and cylinders. We’re not trying to make you into a cheater; we’re just looking for performance for any class. Age classes usually don’t have displacement limits, and as we said before, a really good 270 can be competitive with a 450. But not all the 250s make really good 270s. Some are much better than others. Here’s how the 250s rank when they’re no longer 250s.

THE HUSKY TWIN THAT NEVER WAS