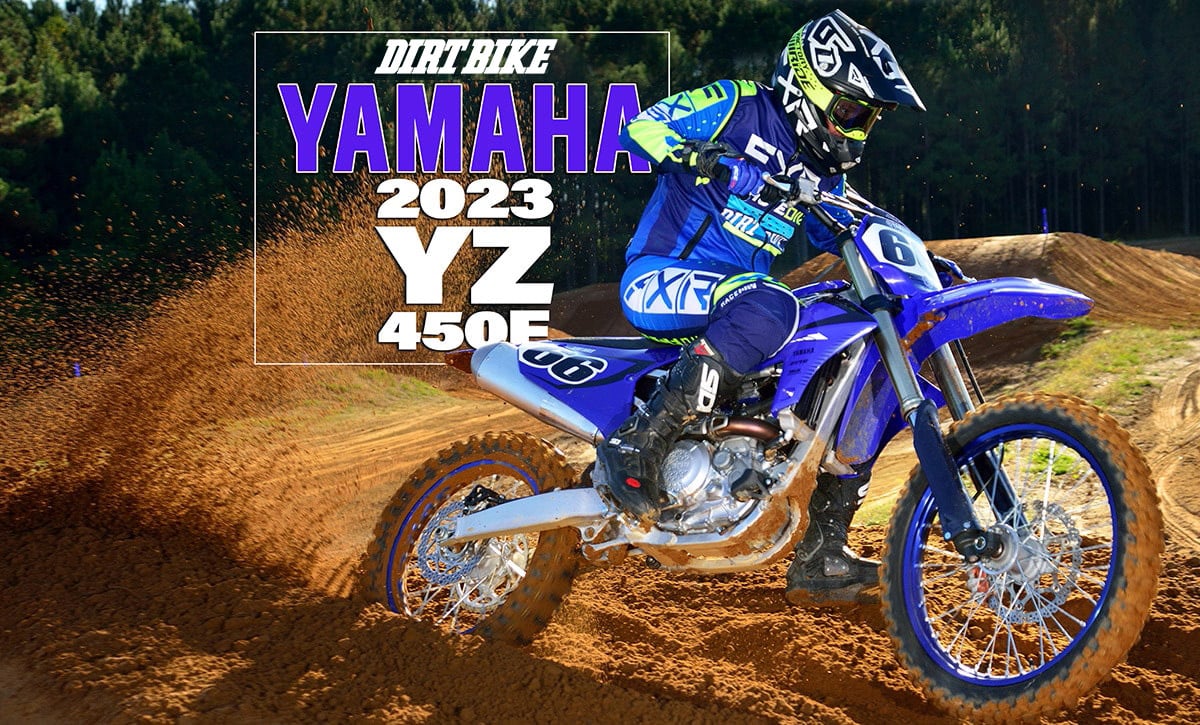 Yamaha probably could have coasted along with the Yamaha YZ450F for a couple more years. It was a new bike in 2018, and it has been wildly successful since then, especially since Dylan Ferrandis and Eli Tomac got on board. But, the 2023 YZ450F is a total redo. Only the wheels and a few engine parts remain. This isn’t one of those bikes that was labeled “all-new” by the social-media press because of redesigned plastic parts. It really is something new.

Only the design concepts and core principles are unchanged. Yamaha is committed to the reverse-cylinder concept that it introduced back in 2010. The internal testing crew also stuck with the KYB coil-spring fork through the era of air forks. And, Yamaha continues to go down the path of user customization with continued development of the Yamaha Power Tuner smartphone app. In terms of mechanical parts, though, the 2023 YZ450F is one of the most radically redesigned bikes in a year that has been defined by redesigned bikes. 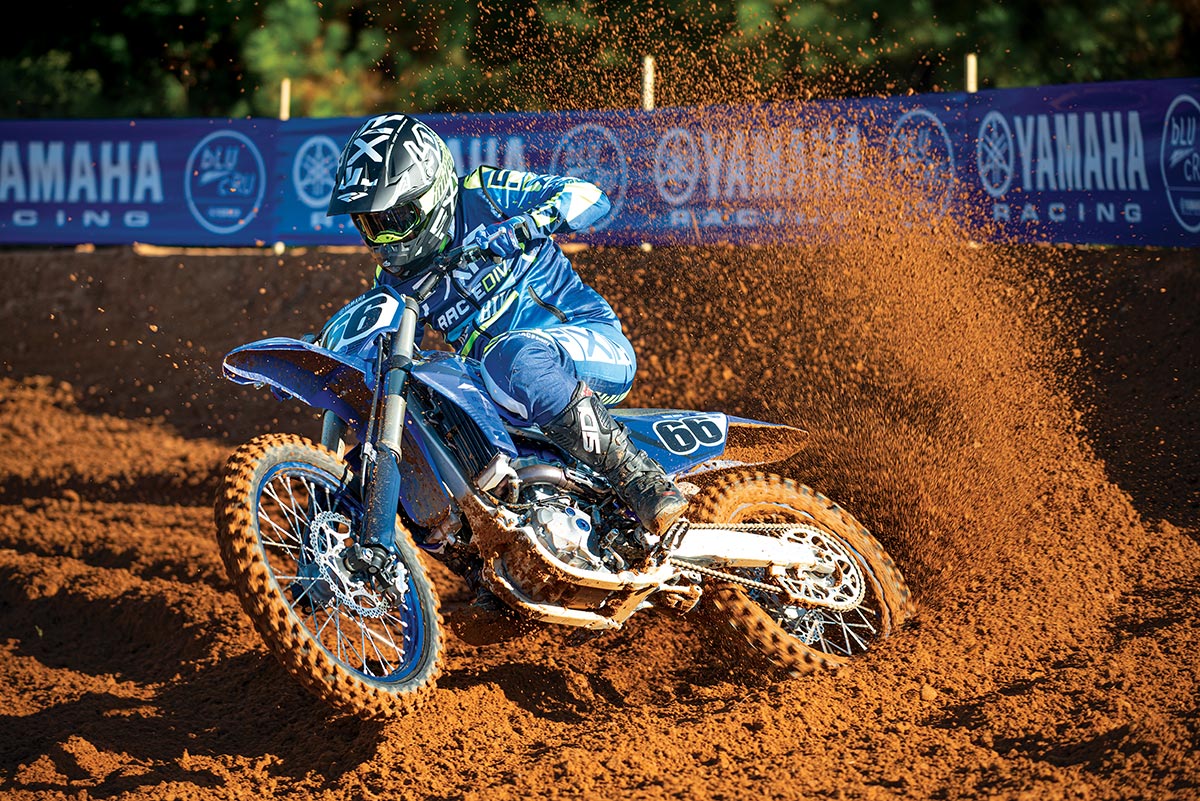 Yamaha’s goals were ambitious. The engineers wanted to incrementally improve everything. If the existing YZ450 were a big, fat loser, that would have been easy, but it was already one of the best-selling bikes in the class. The priority list started with a reduction in weight and bulk. Then the shopping list continued with a power increase, more manageability, more comfort and, above all, there could be no loss in reliability. Weight was carved out of most engine parts. It was a matter of a few grams here and a few grams there. In some cases, the changes are counter intuitive. The crankshaft, for example, is 6mm larger in diameter, even though it weighs less. That results in a net increase in flywheel effect. The intake valves were increased in size by 2mm, the intake volume was increased by 9 percent at maximum lift, and the ports were reshaped. The combustion chamber, piston, starter, clutch and camshaft all were redesigned, and in several cases plain bearings replaced roller bearings. Even the cases were rethought with oil and coolant passages incorporated within the castings. The motor now uses a dry sump oil recovery system, which usually means there’s an external oil tank somewhere. In this case, that oil reservoir is contained in a cavity around the generator. The transmission gears were even redesigned to be lighter, and in many cases this meant making them larger in diameter–once again, very counter intuitive. After all that, Yamaha only achieved a 3-pound decrease in engine weight. For more, the engineers had to look to the chassis, where they also had to slim down the overall package.

The frame itself is composed of 10 aluminum pieces welded together. The side beams were lowered by 15mm where they join the head tube, and there’s increased rigidity in the down tube, swingarm pivot and footpeg cross-member. The fuel tank is narrower, and the inner ducts that feed the airbox were removed, reducing the total width at the shrouds. Altogether, Yamaha says the weight loss adds up to a total of almost 6 pounds. That should make this bike the lightest of the Japanese 450s.

RIDING AT THE GOAT FARM

The 2023 YZ450F is important to Yamaha brass, and they wanted to make a big deal of it. All the U.S. media was invited to ride the bike for the first time at the training facility for the Monster Energy Star Yamaha Racing Team, aka the Goat Farm. We got to spend two days at the ranch where Ricky Carmichael learned his craft near Tallahassee, Florida. After that, the test bike for Dirt Bike was shipped to California where we have other bikes for comparison, and we could do further testing in more familiar terrain.

Up front, we can attest to the fact that the Yamaha feels light. We really don’t need other bikes to tell us that. It’s also much narrower, with a spread-out, comfortable rider position. We often thought that the old Yamaha was designed specifically for Yamaha testers Steven Tokarski and Steve Butler, both of whom are on the short side. With this bike, it seems that Travis Preston got to exert some tall-guy influence, too. Everything is roomier. The footpegs are 5mm lower and 5mm further rearward. The seat is 5mm taller. That pushes the seat height higher, too.

You can tell all that as soon as you get on the bike. First, you might have a hard time getting a leg over the seat; it’s noticeably higher. Once you’re underway, however, it’s nothing but good news. It doesn’t just feel light for a Yamaha, it feels genuinely light by any standard. That’s something that hasn’t been a YZ450F trait for a very long time. The overall handling, though, is still very familiar. Once you get past the layout, you get that distinctive Yamaha feel. For lack of a better description, we have often said that you steer the Yamaha with the rear wheel. That means it turns best when the throttle is open, as opposed to a Honda that can be steered with the front end. Some riders love that and say it breeds better riding technique. Others have a hard time getting used to it.

Overall, we have to say that the suspension is still as impressive as ever. Even though the Star track wasn’t especially rough, there were big jumps, and the YZ handled them all easily. There were only a few tweaks in the suspension department for 2023, mostly in valving. The fork now has a plastic knob to allow easier adjustment of compression damping. The dust seal has a larger lip, and the plastic guards wrap around for more protection. With all the chassis changes, Yamaha suggests more preload than before. We initially set up the bike with a 97mm ride height. This helped to make the bike steer a little sharper on the tightish outdoor track at the Goat Farm. Eventually, we returned to around 105mm, which is the ride height we’ve learned to use on our 2022 test bike. That felt more comfortable overall. This is a process we have gone through on Yamahas in the past. If you want to make it steer as sharp as a Honda, KTM or Suzuki, you’ll be chasing settings all day.

The power delivery, on the other hand, is more Honda-like than ever. In its more aggressive map, it makes more power, hits harder and revs higher than before. Yamaha claims a 5-percent increase in output and a 500-rpm increase in peak revs. All very easy to believe. It’s a rocket. The Star outdoor course is basically a third-gear track, and the Yamaha was a handful there, especially where the traction was good. It was difficult to keep the front end on the ground. Often, riders resort to keeping a ready finger on the clutch lever just to keep the power in check. The YZ comes with a milder map available at the push of a button, and we learned quickly that we preferred it there; it’s not as fast, but it’s much more controllable. In fact, it feels more like the 2022 YZ450F power, which we love. Yamaha still offers a sophisticated user-operated tuning device in the Yamaha Power Tuner smartphone app. It has undergone changes of its own and now has a tab that lets you adjust the output on a single sliding scale.

As you might expect, there are dozens of small differences that experienced Yamaha riders will notice. The new clutch, for example, has a different feel this year. Instead of coil springs, it has a coned disc spring, similar to the design that KTM and Kawasaki use. The pull is more linear, although not necessarily lighter. In stock form, actuation is through an old-fashioned cable, but Yamaha designed it to be easily modified to a hydraulic clutch. The conversion kit isn’t yet available, but the price is targeted to be around $300. For what it’s worth, Eli Tomac and Ryan Villopoto prefer the cable.

The 2023 Yamaha YZ450F is arriving in dealerships now. As with every newly redesigned bike that we test, it will be some time before the bike reveals its various idiosyncrasies. But, we already know that the bike has improved in the few key areas where it had weaknesses. If you’re already a Yamaha fan, you can’t help but love it. If you’re not, it might convert you.