You can be forgiven if you don’t quite know about the SWM RE500. It’s a brand-new model—sort of. We’ve seen it before in a number of different roles. The most recent incarnation of the bike was called the RS500, and it was a fully certified dual-sport bike in 2020. Now, the 2023 version is back as a dirt-only model, simply because it’s awaiting recertification. If you know how the federal government works, you know that could take a while. Rather than wait for that to happen, the U.S. importer made a few changes and is offering it as a trail bike. Those changes include richer mapping and a more aggressive WRP exhaust system. In many states, this model is fully acceptable as a dual-sport bike as is. It has most of the equipment, and what isn’t there can be readily purchased from the importer. 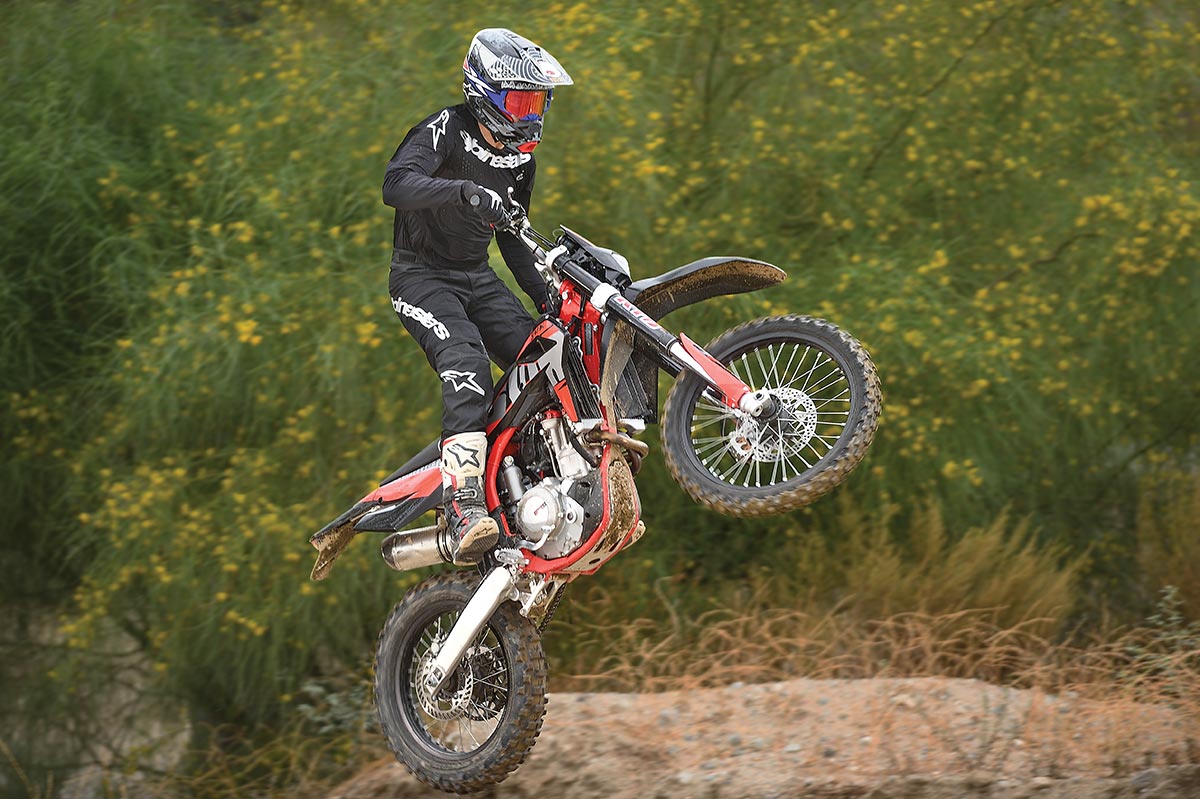 If you’ve been around motorcycles for a minute or two, you might have some notion that you’ve heard the name SWM before. This was the name of a brand that actually won the World Trials Championship in 1981. The present-day SWM has virtually nothing to do with that one. It was just a legacy name that the current investors thought might mean something in the domestic Italian market. But, the motorcycle under the badge still has a long, interesting history. The motor and frame were once sold under the Husqvarna name. Back in 2006, Husqvarna (then produced in Italy) was the first company to offer a truly dirt-worthy, dual-sport bike. In 2008, BMW purchased Husqvarna and discontinued this particular model because the Germans had just designed their own dual-sport 450. In the years that followed, BMW financed and built a whole new Husqvarna factory near Varese, Italy, then promptly lost interest in the whole project. They sold the Husky brand to KTM in 2013 and abandoned the new factory.

That’s when an investment group composed of some Italian businessmen and the Chinese conglomerate Shineray got the factory going again and acquired all the tooling to make the old Huskys under the SWM name.

Of course, the new SWM isn’t exactly the same as an old Husky. But, it isn’t that different, either. The motor remains a double-overhead-cam, four-valve four-stroke with a 6-speed gearbox. It looks almost exactly like it did back in 2001 when it was first imported to the U.S. as the Husky TE400. If you think about what was going on in the early 2000s, the bike was wildly sophisticated and way ahead of its time, even offering electric start. That was before the Honda CRF450R, the Kawasaki KX450F or the Suzuki RM-Z450. The steel frame is essentially the same as well. By reusing existing tooling, the company is able to build a bike in Europe and sell it for $8299.

Today, the bike is, of course, fuel injected. It has a Mikuni EFI, new bodywork, Brembo brakes, a hydraulic clutch and KYB suspension with an open-cartridge fork and linkage rear suspension. The Chinese connection allows SWM to manufacture some of those parts in Asia. All the final assembly is still in Italy.

When we last tested the SWM, it had just undergone a long, bureaucratic process to become a fully certified dual-sport bike. For various reasons, that whole process had to be started over again. That will take over a year. While that’s taking place, the current RE500 is a placeholder and is imported as a closed-course competition bike. The good news is that it doesn’t have EPA-lean fuel mapping or the stuffed-up, dual-canister exhaust system. The exhaust is now a WRP competition system with a carbon fiber end cap and titanium hardware. The bad news is that it’s now in a category filled with very competitive bikes based on newer technology.

Despite all that, the SWM has a sweet motor. It’s torquey, smooth and easy to use. It’s fairly powerful, too. The RE500 has a little more power on top than a current Yamaha WR450F or a Honda CRF450R. It’s clearly more powerful than it was as a dual-sport bike. For that matter, it will eat up a KTM 500EXC or a Husqvarna FE501S. It’s still no race bike, but it’s great for trail riding in wide-open spaces and can go hill-climbing with the best of them. Its weakest point is its weight. The SWM weighs 274 pounds on our scale without fuel. It’s also a very big motorcycle with a seat height that is intimidating to riders of medium stature.

One thing hasn’t change since the SWM was a dual-sport bike; it’s gigantic. The rider triangle is awkward for anyone of average height. The seat height is tall. The bars are a long reach, and the pegs are a bit of a stretch. It’s like SWM took a regular dirt bike and upscaled everything by 10 percent. That goes for the weight, too. On our scale, the RE500 weighs 274 pounds. For comparison, a Honda CRF450X with most of the same equipment weighs 263 pounds. The Yamaha WR450F is 252 pounds. Neither of those bikes is considered particularly light, either.

The weight limits most of the SWM’s off-road capabilities. It affects acceleration, stopping distance and traction. It also means the bike is more physically demanding at speed. You have to be a big, strong rider to muscle it around. On the flip side, the weight might actually make the suspension more comfortable. On choppy ground at speed, the bike has a Cadillac feel. The suspension and wheels can be very busy without upsetting the mass of the rest of the bike. The fork and shock reflect some careful setup from SWM’s engineering department. The spring and damping rates are spot-on for casual trail riding.

The overall package reflects excellent attention to detail. The SWM never overheats, even in tight canyons. It has a radiator fan and an overflow tank to prevent that. The hydraulic clutch doesn’t fade. The brakes are excellent, and all the components are of good quality. The overall package offers decent value compared to other dedicated dirt bikes, but we’re still longing for what could have been. As a fully certified dual-sport bike, the RE500 would have been outstanding.