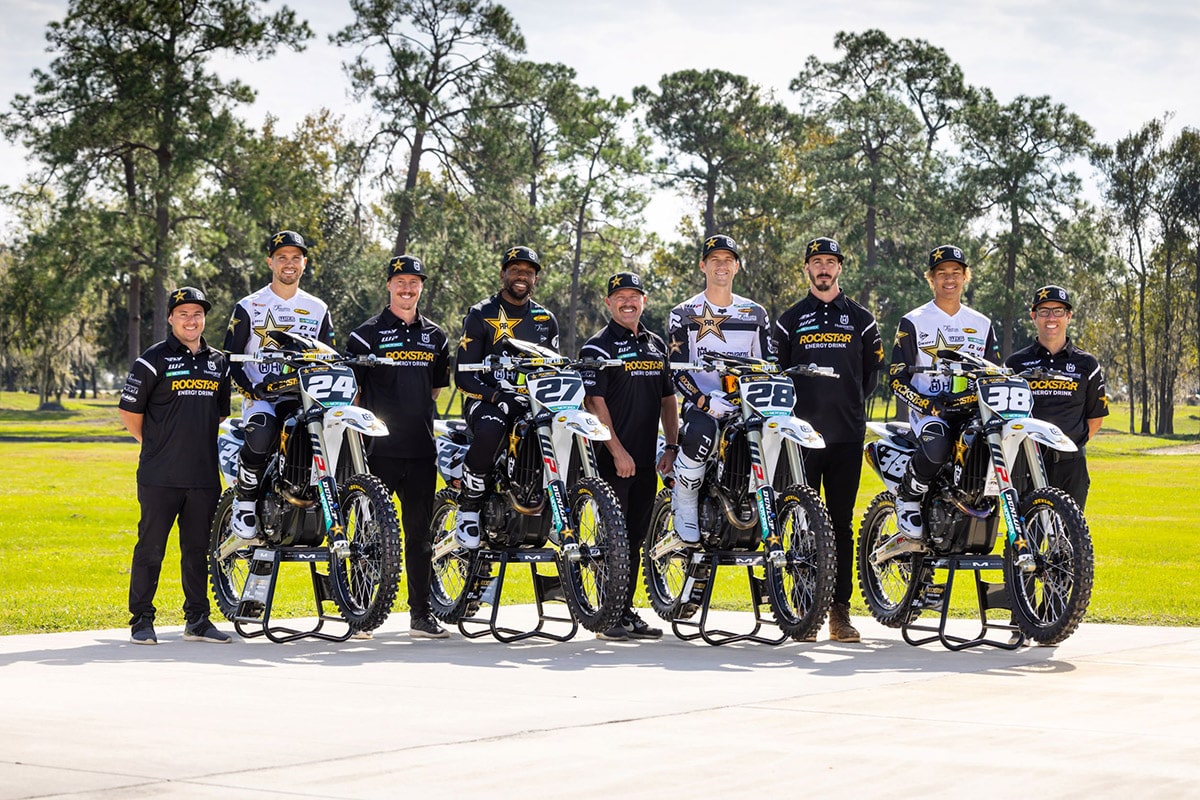 The Rockstar Energy Husqvarna Factory Racing is proud to introduce its four-rider SuperMotocross World Championship roster entering the new season, consisting of newly signed Christian Craig and the returning Malcolm Stewart aboard the 2023 Husqvarna FC 450 Rockstar Edition, as well as RJ Hampshire and Jalek Swoll equipped with the Husqvarna FC 250.

Officially launched on Tuesday at RD Field, where the team’s practice facility is based in Murrieta, Calif., all four Rockstar Energy Husqvarna Factory Racing team riders are eager for the gates to drop on the 2023 AMA Supercross season in Anaheim on January 7. From there, inclusive of Pro Motocross beginning in May, the newly introduced series will feature 31 events combined.
As the current 250SX Western Regional Champion, 31-year-old Craig will transition to the 450SX division full-time in the upcoming season with momentum on his side. He has swiftly adapted to the FC 450 Rockstar Edition upon training with Aldon Baker at the Baker’s Factory and carries high hopes into both supercross and motocross.
Malcolm Stewart, meanwhile, is set to continue his upward trajectory in what will be his second year with Rockstar Energy Husqvarna Factory Racing. After finishing a career-high third in the 450SX standings this past season, complete with three podiums to his credit, expectations for the entire SuperMotocross World Championship are high for the 30-year-old rider.

Christian Craig: “This is year one on the Rockstar Energy Husqvarna Factory Racing team and it’s been good so far this pre-season. I moved the whole family to Clermont and started fresh with Aldon. We went straight into bootcamp, and it’s been good so far. I’m just learning the bike, learning the program and just trying to build each day and get better. I’m getting more familiar with the bike every day and just keep grinding. Other than that, just doing the laps and getting ready for A1, trying to be as ready as possible.”

Malcolm Stewart: “I feel great going into the 2023 season with the team. I had a really good year last year for supercross and I felt like we were just getting the ball rolling. I just feel like, for me, it’s all about being consistent, as I’ve always said. I’ve got better goals for myself and I think I got some personal stuff that I know I needed to do done. Being with the team again for another year on this bike, I feel like it’s going to be a really good year, so I’m excited. I got a new teammate, Christian Craig, and I feel like he’s going hold me accountable just like everybody else that’s out there, so I can’t wait to see how we do and I think it’s going to be a great year for the Rockstar Energy Husqvarna Factory Racing team.”

It will be RJ Hampshire and Jalek Swoll who lead the Rockstar Energy Husqvarna Factory Racing 250 class program into the SuperMotocross World Championship series, both continuing with the team and with the goal of competing for victory in the new year aboard their 2023 Husqvarna FC 250 race bikes.

As for RJ Hampshire, this year also marks his fourth with Rockstar Energy Husqvarna Factory Racing and it is shaping up to be his best yet. The 26-year-old finished runner-up in the 250SX Eastern Regional Championship with a breakout Main Event win, followed by finishing fifth in 250MX, where he also managed to stand on top of the podium. Now, he is firmly targeting to contend for championships.

At 22 years of age, Jalek Swoll enters his fourth term with the team in the professional ranks and is looking to put his experience into practice throughout both indoors and the outdoors. In 2022, he displayed top-five form in supercross and has hopes of building on those results in the 250SX and 250MX series.

RJ Hampshire: “We’ve had a really solid off-season so far since the beginning of December and I feel like we’re about ready to go. We made a lot of progress with the bike and my comfort, so looking back on last year, I know we’re in a good spot. Getting second in the championship was huge and I definitely feel like we can make a big jump forward. These guys have been working really hard ever since last year and we’re in a really good spot, so I’m excited to go racing with the Rockstar Energy Husqvarna Factory Racing team.”

Jalek Swoll: “I’m really looking forward to this upcoming season with the Rockstar Energy Husqvarna Factory Racing team. We’ve gotten a lot more time on the bike and have had some really good days back in Florida training with Aldon and I’m feeling good about this season. I’m eager to get back into racing with the whole team and look forward to the fun of that whole deal. I’m excited for us riders to come out swinging hard and try to re-brand ourselves this year.”

Nathan Ramsey, Rockstar Energy Husqvarna Factory Racing Team Manager: “I’m very excited about the 2023 season. We’ve got a new addition to the team with Christian Craig, and three hard-working riders returning this year with Malcolm, RJ and Jalek back with us. Rockstar Energy Husqvarna Factory Racing is looking good, and the guys have been putting in a lot of work at the Baker’s Factory during the off-season. We’re excited to have Josh Hansen on-board doing some testing with the bikes. We’re feeling confident coming into the year and looking forward to getting it started.”