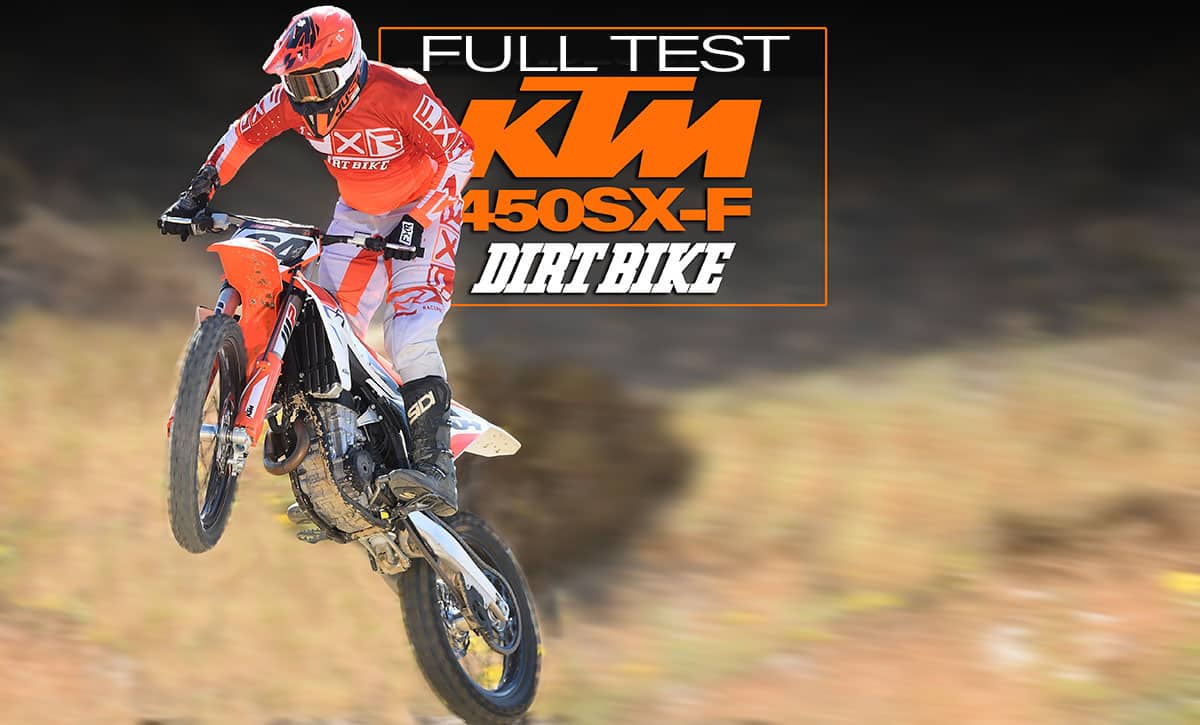 The KTM 450SX-F is the flagship of the combined KTM/Husky/GasGas fleet. It’s first on the list for new technology, updates and improvement, with all the other bikes eventually getting variations on that theme. The 2022 ½ 450SX-F Factory Edition was the first bike of a new generation, and that technology has now trickled down to the 2023 KTM 450SX-F standard edition. This bike is subject one for a generation of clones. 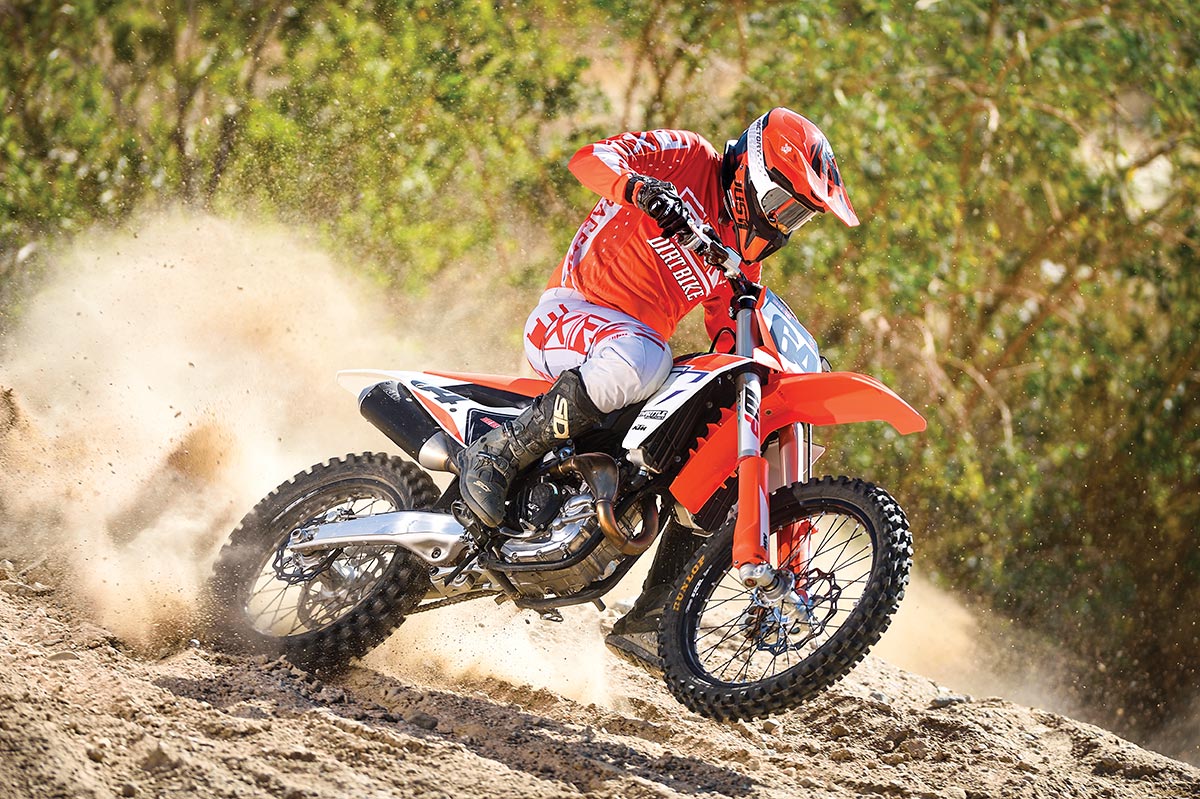 KTMs and Husqvarnas have been available for months now with the platform. GasGas, being perceived as the budget brand in the confederation, will get the changes later. Those changes are extensive, particularly on the chassis side of the ledger. Despite the new frame, KTM stayed with the overall frame geometry from the past. The wheelbase, steering-head angle and weight bias aren’t very different, but the frame rigidity and the location of the countershaft sprocket relative to the swingarm pivot have changed. The rear suspension has changed dramatically, but the fork is still the WP Xact air fork.

As far as the motor goes, there’s a new head and gearbox. The electronics have received attention, too. There’s a new handlebar-mounted combo switch on the left that offers two map options, traction control and Quickshift. On the other side, a new start button is mounted and shares the housing with a kill button. If you want Launch Control, you press Quickshift and traction control simultaneously. It will remain active for three minutes or until you chop the throttle.

There’s new bodywork, but the overall riding position isn’t that different from what KTM guys are used to. Thankfully, most of the bodywork fits together more intuitively, so the bike is easier to work on. Most of the fluid access points are marked. It still has a side-access airbox. Some of the things that haven’t changed include the diaphragm clutch, Brembo hydraulics, Neken handlebar, ODI grips, Excel rims and Dunlop tires.

Between pro racing results and early tests, there’s been a flood of scuttlebutt floating around in the ether about the new KTM platform. Some riders expect it to be the most alien bike ever built. It’s not. The manners and traits of the 2023 KTM 450SX-F are still very KTM-like. The reason there’s been so much talk is because that’s what superfans do. They expect a change in performance proportional to the number of new part numbers. There isn’t. Still, there’s much to talk about.

First things first, the new bike is faster than the old one. That’s impressive, because it was already pretty fast. It still has the same power delivery, which is very smooth and linear. It has more torque down low (before 7000 rpm) than most other 450s, and it also revs higher (above 11,000) before it signs off. The bottom line is that it has the broadest powerband in the class. That hasn’t changed, at least not in map one, which is denoted by a white indicator light. Map two (the bottom button with the green light) has a little more hit. The power arrives a little later and harder. You might remember that KTM announced a Bluetooth app last year that would allow more mapping flexibility through use of a smartphone connection. It’s still in the works. Right now, there’s a problem with semiconductor availability that delayed the inclusion of the feature, although it came as standard equipment on the 2021 Factory Edition.

In most circumstances, the new chassis handles much like the old one. It’s still a great bike in turns and reasonably stable in a straight line. It is stiffer, though. That’s a good thing for faster, looser tracks where the 450SX-F is more solid and tracks straighter than the old one. On hard-packed tracks, you might not notice the benefit as much, but you will feel the new frame transmits more feedback straight into the rider’s hands and feet. Remember when Anthony Cairoli came to the U.S to ride the opening rounds of the 2022 Lucas Oil Pro Motocross series? He rode the 2023 production-based bike and wanted it stiffer yet. We’re guessing that much of the input for this change came directly from the GP series, where tracks are faster and sometimes have deeper sand. U.S. test riders probably felt it would be good on Supercross tracks. Both aspects are true, but it also puts more emphasis on suspension setup. Suspension has never been one of KTM’s strong points, at least not in motocross. Now, the new chassis casts a much greater light on the shortcomings of the Xact air fork. It’s wonderfully adjustable and incredibly light. It does well on big hits and medium rollers. It isn’t especially great on small chop and square edges, and with the new frame, you feel even more of that stuff. It’s more of a comfort issue than a performance handicap.

In the rear, you get a lot of the same feedback. Plus, if you’re a KTM guy, you will notice that the new chassis has less squat on acceleration. The countershaft sprocket is slightly lower in relation to the swingarm pivot, and that results in less weight shift to the rear when you exit corners. The good news is that it keeps the steering geometry more consistent through the turn, and that provides more stability. Are these major handling issues? Not at all, just ones that are noticeable when riding a new KTM and an old one back to back.

Another difference between the new bike and the old one is weight. The 2022 KTM 450SX-F was freakishly light—223 pounds without fuel. Now, it’s 229 pounds. The good news is that it is still the second-lightest bike in the class. The lightest is the GasGas, which is based on last year’s KTM.

There’s so much to like about this bike. The new Quickshift feature works as advertised; it makes full-power upshifts without the clutch smoother by killing the motor for a fraction of a second. If the notion of a kill switch connected to your shifter makes you nervous, then you can turn the feature off. We still love the brakes, the clutch and most of the componentry. If you liked the previous KTM 450SX-F, you’ll like this one. If you absolutely loved the previous KTM, you might have issues trying to make the new bike feel like your old one. It will take time. The bike is different, and dealing with change can be difficult. Just keep in mind that without change, there is no progress.