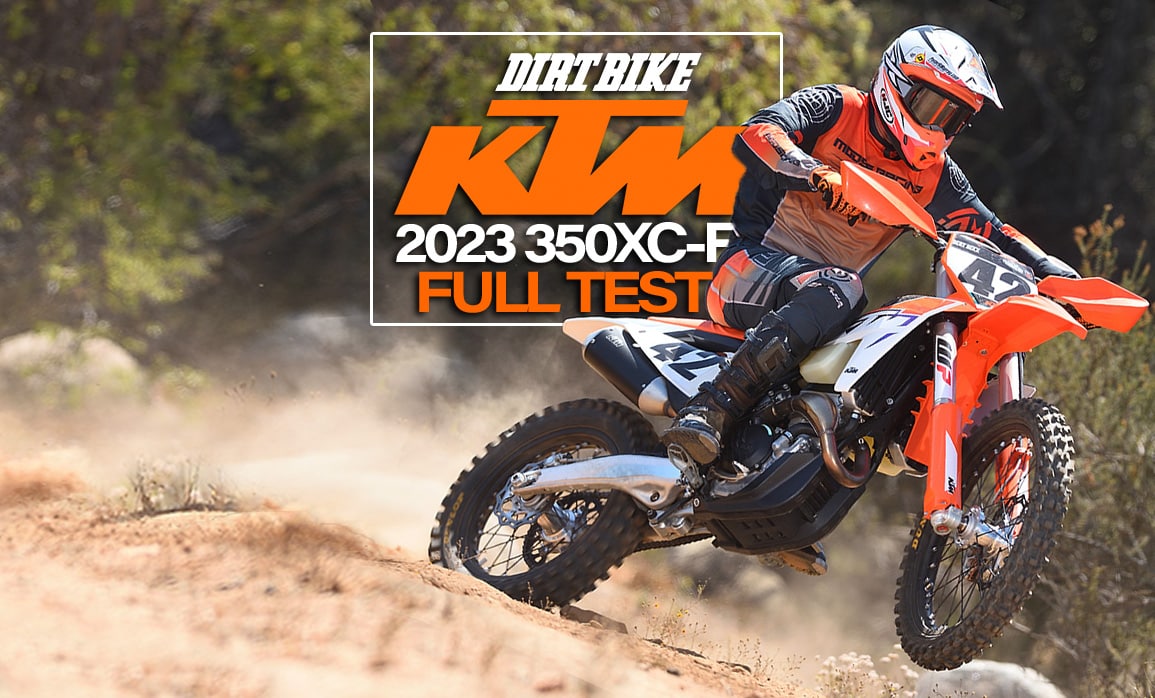 The KTM 350XC-F is the undisputed king of American off-road racing. It has won in the east and won in the west. It’s won in enduro, cross-country, EnduroCross, ISDE, sprint enduro and every other form of racing you can mention. It’s America’s favorite off-road race bike.

KTM’s XC line is over 16 years old, and it more or less defines the category we call “closed-course cross-country.” Setting aside the nonsectarian nature of the term, the category is populated with kinder, gentler motocross bikes. A 350XC-F is just like a KTM 350SX-F, but with a six-speed gearbox, softer suspension, a larger fuel tank, an 18-inch rear wheel, a kickstand, an O-ring chain, handguards and a skid plate. It has motocross power, a motocross muffler and is not EPA certified as an off-road bike. It’s a formula that’s resulted in over 20 off-road championships for the 350 alone.

NEW PAGE
For 2023, the 350XC formula is being altered more drastically than ever before. It has a completely  new motor, a redesigned frame and all-new bodywork. Only a few core concepts are unchanged—the basic geometry, the 2.2-gallon fuel capacity and the list of components. It still uses Brembo brakes, Brembo hydraulics, WP suspension components and Neken bars. KTM went all in with the concept that debuted in the 2022 Factory Edition, using the same platform for all its competition bikes in 2023.

The 350XC motor carries nothing over from 2022 aside from the bore and stroke. The head is obviously broader with more space between the double overhead cams The compression ratio is higher (14.6:1 versus 14.2:1). Even the gear ratios in the six-speed gearbox have been altered, along with the primary ratio and the final drive sprockets. The common theme is lower gearing. First gear is a good 20 percent lower. Final gearing, however, is taller at 14/47. The bottom line is a wider range of overall gear ratios.

Much has already been discussed about the new frame because of its use by the Red Bull KTM Factory team in the 2022 Supercross season. KTM is sticking with the steel backbone concept, but the new chassis is clearly more beefy, stiffer and a little heavier. On our scale the 2023 version is 237 pounds without fuel, which is around 7 pounds more than the previous version. The suspension components are the same as those found on KTM’s motocross bikes—the WP Xact 5448 air fork and the WP 5750 shock. The spring rate in the rear is 45 N/mm, which is the same as that of the MX bike, but the valving is softer. The recommended air pressure for the fork is 144 psi, which is 10 psi lower than the recommendation for the MX bike.

HOUSE OF THE 350
We still don’t understand why every motorcycle company on earth doesn’t offer an off-road 350 four-stroke. The 350XC-F is downright brilliant. After all this time, it’s still the missing link between the brutish overkill of a 450 and the sluggishness of a 250F. It’s simply proof that the guys who designed this bike actually ride, whereas the thinking in other boardrooms is restricted by traditional displacement classes.

The 350 gives you the option of torquing your way along the trail at low revs or mounting a full-on attack by screaming the motor. Sometimes one approach works better than the other, but it depends on the rider and the terrain. If you choose the low-rev option, there’s a sweet zone below 10,000 rpm where the bike responds quickly but not violently. The high-rev technique, on the other hand, means things happen very quickly and forcefully, requiring more effort to maintain control. You are, after all, dealing with 50 horsepower, and the 350 carries its peak output for a long way. In truth, most riders use a combination of the two riding styles. You simply leave it in one gear and almost never shift. KTM altered all the gear ratios this year, including the primary gears and the final drive sprocket sizes. When you look at the big picture, the overall gear ratios are more spread out. First gear is about 12 percent lower. Second through fifth are lower as well, but by lesser amounts until sixth, which works out exactly the same as last year’s. On normal trails, there’s rarely a need for first. Likewise, you’re unlikely to find yourself tapped out in sixth, even in the fastest western GPs and desert races. Top gear is mostly for reducing the buzz on high-speed dirt roads. 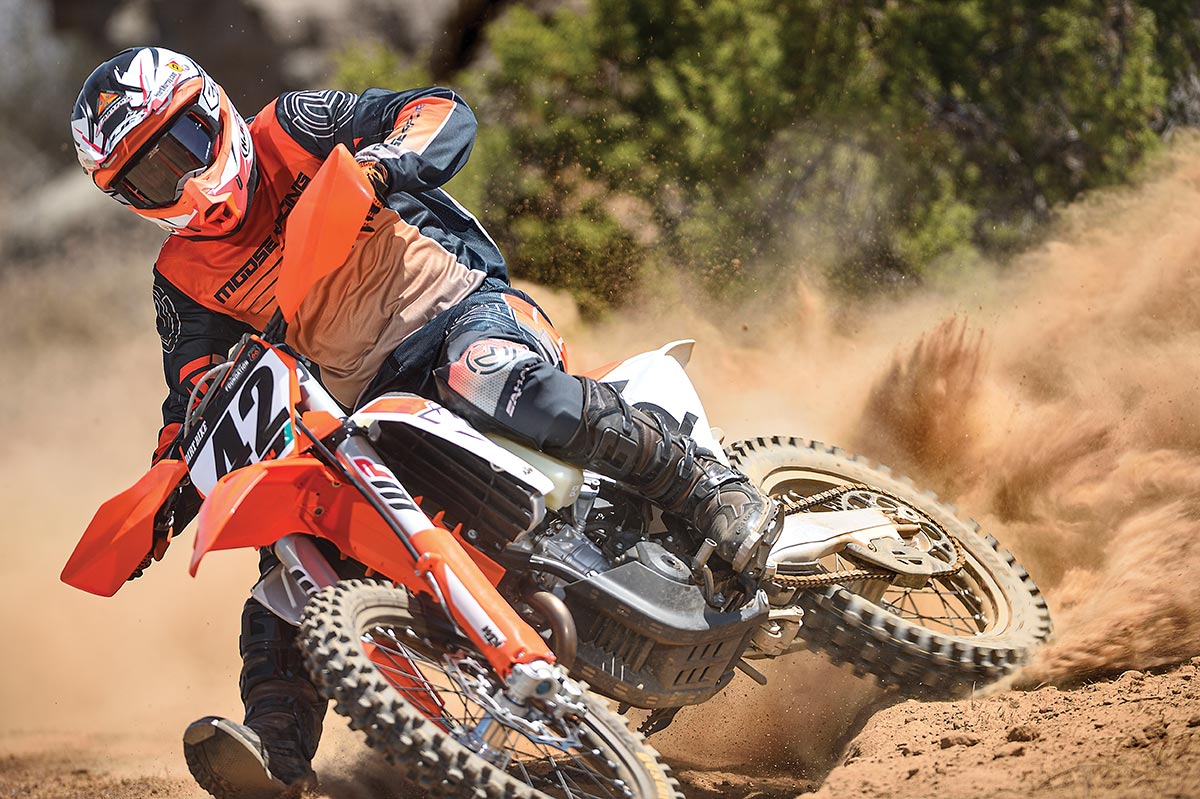 For 2023, the 350 motor gained a little in the middle. This makes the powerband even more versatile. It’s still super smooth and linear but with a little better response. There are two maps available on the new handlebars switch, and there’s a distinct difference. The lower map (green) is more rev-oriented than the standard map, which most riders preferred. Both are clean without pops or hiccups. Another option available in that handlebar switch is Quickshift, which is a feature that interrupts the motor for smoother, full-throttle upshifts. There’s no clean verdict on this; some riders claim it results in an unintended stutter, just by brushing the shifter. Others say there’s no downside, only benefits. That’s why KTM allows you to disable the feature with the press of a button, albeit a hard press of the button.

THE MOTO FACTOR
As we said, the new frame has been the subject of much discussion, prompted by the sudden slump in Cooper Webb’s Supercross results. In truth, what Cooper Webb might or might not be experiencing on a Supercross track with his 450 has no bearing on how the 350XC-F acts on the trail. The new 350XC-F handles about the same as the old 350XC-F. The only differences you might notice are a little more rigidity and a little less squat. Both factors are highly subjective. The rigidity is absorbed almost entirely by the softer suspension settings used by the XC. Most riders feel the new frame is superior in the sand, and that you can get away with softer settings. In that situation, the new bike is actually less harsh than the old one. On hard-pack terrain, you might have to use softer settings to get to the same comfort level you had with the old, flexier frame. As far as squat goes, this is the result of a repositioned motor. The countershaft sprocket is now a little lower in relation to the swingarm angle, which means the rear suspension stays a little more extended on acceleration than before. It’s a subtle difference, but some riders are more sensitive to that stuff than others. Is it better or worse? We’re not sure. It’s just different. We have noticed that the chain buffer endures more wear than the old one, so keep an eye on that.

THE 350 UNIVERSE
You hear it all the time; people say that motorcycles have become too specialized. They aren’t talking about this bike. The KTM 350XC-F is the most versatile dirt bike in the world. It can do anything from motocross to EnduroCross. What’s even better is that it’s great at all those things. There’s no compromise. The power delivery is spectacular. The handling, suspension, brakes and clutch are excellent. The bike’s record over the past 16 years speaks volumes, and there’s no reason that the 2023 model wouldn’t continue with that legacy of success.