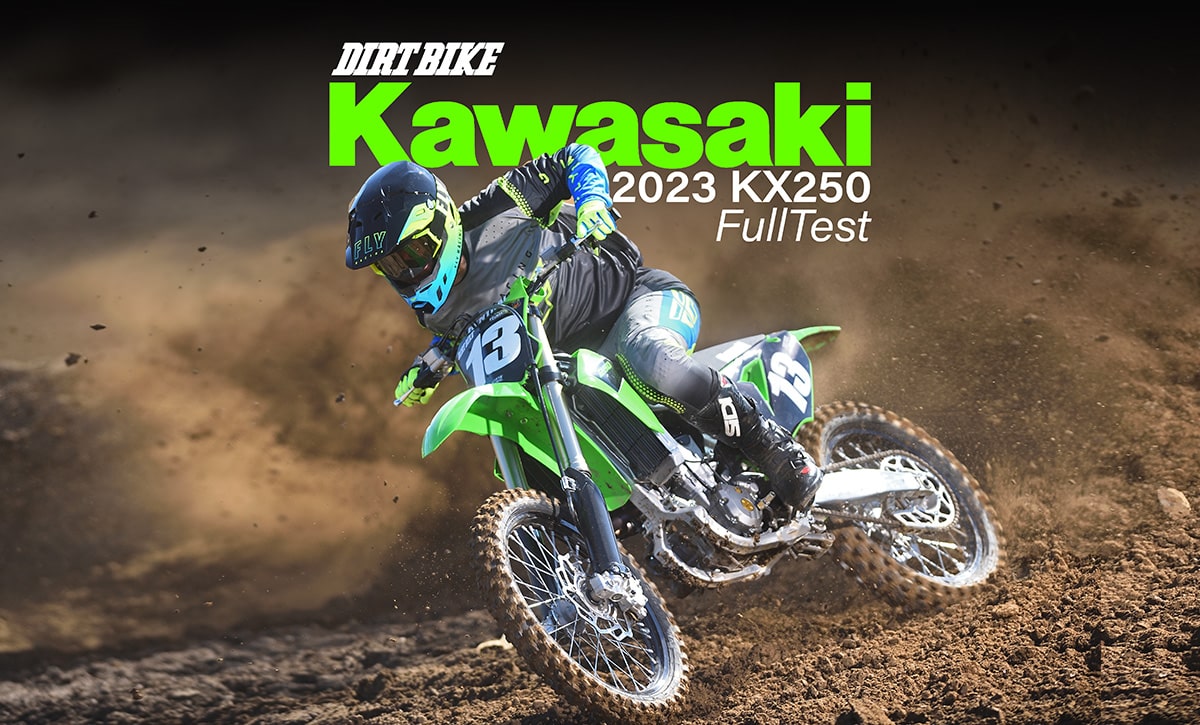 Ask anyone. True progress doesn’t arrive with storm clouds and lightning bolts. It comes incrementally and quietly in the wee hours of the morning and late at night. And, it often arrives without fanfare. The 2023 Kawasaki KX250 is a perfect example. This is a bike that wowed us all in 2021 when it was introduced with extensive changes. The motor finally got electric start, and the frame was totally revised. It got new bodywork, reworked suspension and became the only Japanese 250 with a hydraulic clutch. Now, two years after the revolution, the KX250 appears to be freewheeling into the new year unchanged. But, that’s not the case at all. This might be an even more important stage in the ongoing evolution of the KX250.

It seems hard to believe, but just two years ago, the Kawasaki KX250 was a member of the kickstart generation. There wasn’t much for KX diehards to brag about, except one thing. That year it made the most peak power of any bike in our 250 MX shootout. It had a new head design that featured finger-followers between the cams and the valves—a design element that had proven successful on other 250 four-strokes. Unfortunately, it still didn’t do well on most tracks with most riders. The Kawasaki’s margin of dyno victory was only one-tenth of a horsepower, and it was hard to find. It only occurred between 12,000 rpm and 13,000 rpm. Before that, it was the weakest bike in the class. Even with the massive redesign of 2021, not much changed. The new bike got electric start but still didn’t have much low-rpm horsepower. Now, the changes are less revolutionary in nature, but more strategically aimed at correcting the bike’s true shortcomings. Here’s the list of things you don’t see without X-ray eyes:

—It got a new head with smaller valves, which are set at a different pitch.

—The upstream injector is relocated from the top to the bottom of the air intake.

—The intake duct is straighter.

—The flywheel rotor is heavier.

—The head pipe is longer.

—It got new ignition mapping.

—First- and second-gear ratios are taller, so the bike is set up to go faster and shift later in each of those gears.

On the chassis side, it got:

—Some things are the same, including the coupler-based mapping changes. The footpegs still feature two options for mounting height, and the handlebar has four positions.

Mitch Payton of Pro Circuit was on hand the first day we rode the bike. The one change he thought was most significant was the reduction in valve size. The old valves were so large that they were right up against the edge of the cylinder wall, which hampered the filling of the combustion chamber. Now, the incoming charge flows around all the edges of the intake valves, so less truly is more.

The Kawasaki is a razor blade of a bike. It’s very narrow, turns sharp and has a cutting exhaust note. You would swear that it’s the lightest bike in the class, but it’s actually one of the heaviest. The KX250 weighs 227 pounds on our scale (without fuel). Which is the lightest? The GasGas MC250F weighs 218, and the Honda CRF250R weighs 219. The lightest bike in the class used to be the KTM, but it gained considerable weight for 2023. We only point out the comparative weights to illustrate how deceiving numbers can be. The Kawasaki is incredibly easy to throw around. Many riders say it’s even a little hyperactive.

Most of that impression comes from the motor rather than the chassis. The KX is fast-revving and hard-hitting. It’s still a monster on top; it might even be a little faster than the 2022 version. The biggest and most immediately noticeable difference this year is that it ramps up a little more gradually. Now, that peak-power zone is longer and much easier to find. It still gains a lot of power in a short range of rpm, but now that ramp-up starts sooner. Even more important, it happens without the need for the throttle to be pinned to the stop. Partial throttle response has improved dramatically. When we talk about throttle response, the king of the hill has long been the Yamaha YZ250F. Despite a lackluster dyno curve, riders generally come off the YZ raving about its power at low revs. What they really mean is that it has power at small throttle input. Kawasaki has made massive improvements in that area, although the Yamaha might still have an edge. We are still waiting on our 2023 YZ250F test bike to make the final call.

Kawasaki allows you to alter the power delivery via color-coded couplers that you plug into the wiring harness. This was mind-blowing technology in 2009. Now, in the age of push-button mapping and Wi-Fi connectivity, it seems clumsy. In general, it’s hard to improve on the stock map (the green coupler). The white one makes the bike a little snappier, but it has a certain raspiness and popping on decel. On the dyno, there’s virtually no difference between the maps.

WHAT ABOUT MY FEELINGS?

As we mentioned, the KX250 has a high-strung personality. We find it interesting that it has the exact same chassis as the KX450 but feels completely different. The 450 is one of the most stable bikes in its class, with predictable moves and mellow manners. The 250, on the other hand, acts like an over-caffeinated teenager who likes to cut turns and dive to the inside. How could two bikes that are so similar act so differently? As we have pointed out many times, the single biggest factor affecting a bike’s handling is its motor. Whereas the KX450 motor has relatively low output for a 450, the KX250 motor is a real rocket compared to other 250s. Once you get past the way the 250 motor hits and sounds, you come to realize that it’s actually quite stable. It holds a straight line as well as anything in its class.

The KX250 also uses KYB suspension, whereas the 450 (standard edition) uses Showa. The 250 has the same spring rates as last year but is said to have stiffer valving. Most of our test riders in the 170-pound range would understandably like it stiffer still. The target weight for a 250 pilot is generally considered to be about 150 pounds. If you’re an advanced 250 rider of that weight, you might want to stiffen things up as well. The standard setting for fork compression is 11 clicks out. It’s no big deal to increase that by as much as five clicks. Beyond that, you might need heavier springs or re-valving. We set the rear suspension preload to 105mm and never had any reason to change.

WHERE WILL WE LAND?

If you look back at the track record for motocross bikes in general, they often hit their prime two years after a total redesign. That’s about the earliest that a factory can react to input from the field. In the 250 motocross world, two of the players are completely new for 2023. Most of the others are unchanged. Does that leave the Kawasaki as a prime candidate to be the bike to have in the year to come? We wouldn’t bet against it.