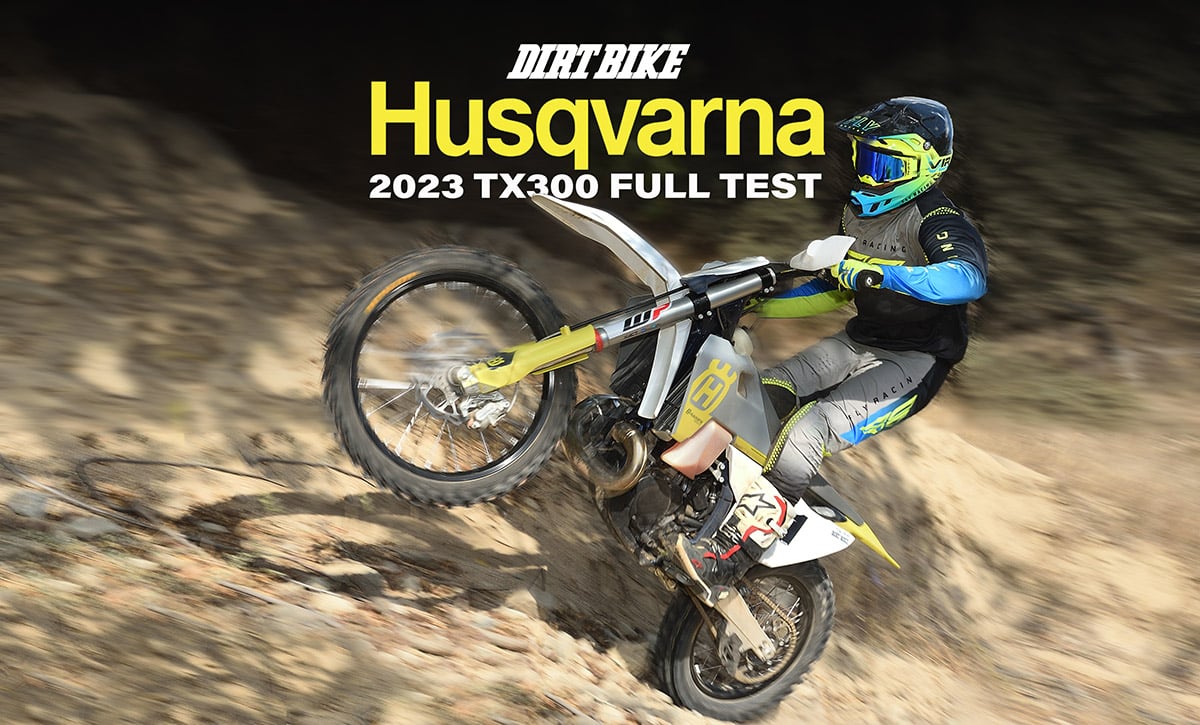 The Husqvarna TX300 represents the next big era in off-road motorcycles. It’s a completely new motorcycle that will be the platform for all the significant two-stroke off-road bikes going forward. That’s not hyperbole; just a fact that anyone can see looking at trends and progress.

The fact that the bike has a new frame, restyled bodywork and redesigned rear suspension is important, but somewhat of a distraction from the real point. The motor was completely redesigned for 2023 with one thing in mind—it had to accommodate throttle-body fuel injection. This is the first production two-stroke motor ever designed with that in mind from the start; all previous EFI two-strokes have been adaptations to existing motors.

Fuel injection has not come easily to two-strokes. Everyone has been working on it for years. KTM, TM, Sherco and various trials bike manufacturers have all come out with various takes on the design, and some have been fairly successful. Most were centered around throttle body injection, which locates the injectors in the same place that a carburetor would sit. Another option was direct injection into the combustion chamber, which some snowmobiles use. In 2018, Husqvarna’s big change-up was transfer port injection. The injectors were moved into the transfer ports. At the time, we thought this was primarily for emissions. As it turned out, that wasn’t necessarily true. Husky’s primary focus was in duplicating the power delivery of a carbureted two-stroke, and TPI came closer than either the throttle body designs or the direct-injection configurations they had tested at the time.

So now, just five years later, Husqvarna has gone back to throttle body injection, which seems to be older technology. Does that mean TPI was a failure? Husqvarna’s people reject that notion and point out that TPI is still used on the TE300 (for now). The nature of TPI is to produce a very smooth power delivery, which is perfect to the more trail-oriented TE. In the last five years, both designs have been in continual development. Now, throttle-body injection has developed to the point that it comes closer to the original goal (i.e. a more carburetor-like power delivery). That translates to a more aggressive nature, which is appropriate for the competition-based TX300. It also solves the problem of how to lubricate the crankshaft. With TPI, oil injection was necessary. By moving the injectors upstream, the crank and rod bearings are lubricated by oil mixed in the gas, which seems to be the way two-stroke purists like it.

Setting the issue of fuel injection aside, the rest of the motor is new, too. Husqvarna finally went to an electronic power valve. The exhaust valve is now controlled by the same CPU that alters the fuel mixture and the spark advance. It has to be the most complicated multi-dimensional map ever produced for a dirt bike. Mapping is the only real difference between the TX300 and KTM’s new 300SX two-stroke motocross bike, at least as far as power goes. Both use the same crankshaft, cylinder, piston and head. The new motor is lighter and slightly more compact. It lost its kick-starter years ago, but now it’s even lost the hole where you might install one if you were so inclined.

For 2023 the combined Husqvarna and KTM product lines got something like 20 redesigned bikes. The common element for those bikes was a new frame. In the case of the competition four-strokes, all those new frames are identical. Not similar, identical. In the case of the TX300 and the other two-strokes, the frame is different, even though it has the same basic layout. We think it’s lighter than the four-stroke frame because the TX300 didn’t gain weight like all those other bikes. On our scale without fuel, it weighs 224 pounds, which is the same as last year’s version. The TX300 does, in case you didn’t know, use linkage for the rear shock, as do all of Husqvarna’s full-size dirt bikes. The shock is basically the same as that used by the motocross bikes, just re-valved for off-road use. Likewise, the fork is a WP Xact air fork but with off-road valving. The recommended air pressure is 141 psi, as opposed to 152 on most motocross bikes. Most of Husqvarna’s competition bikes have slightly less suspension travel than their counterparts in the KTM line in order to reduce seat height. The TX300 has 10mm less fork travel and 7mm less rear-wheel travel than the KTM 300XC. That results in a claimed unladen seat height of 948mm, as opposed to 954mm for the KTM.

THE BEST OF BOTH WORLDS

You can tell from the first time you open the throttle that something is different with this bike. It barks. The power delivery is right now when you gas it. There’s no spool-up time, no waiting for it to clear its throat. As advertised, it feels sort of like a carbureted motocross bike, but not quite. Most carbureted MX bikes that we are accustomed to are 250s, which can be a handful with their on-or-off nature. The TX’s extra displacement makes it much more controllable. Yes, it’s more powerful, and yes, it’s more aggressive than last year’s TPI TX300, but it’s also very manageable. It responds well to partial throttle openings. When you roll it on slowly, it hooks up.

One aspect of the new TX300 is just like last year’s TPI bike. At low rpm, it’s unstoppable. You can take it to the gnarliest, rockiest uphill and let the revs drop to idle speed without issue. It won’t stall unless you absolutely force it to. Usually that means you have closed the throttle completely and come to a stop of your own accord. Even a TPI bike will load up somewhat if you ride continually at such low rpm. Not here. The TX 300 is always clean. Likewise, an older Husky 300 will surge and even detonate slightly in some situations, particularly when they get hot. The new injection system is spot-on as far as fuel mixture goes. We did experience a moment where the bike stumbled a little at high rpm, but it passed and we couldn’t duplicate the issue. If you are familiar with earlier TPI bikes, you probably know that the motor can be confused by sudden changes in rpm, especially when you dump the clutch. This is similar but far less common.

We’ve finally come to terms with the new Husqvarna frame and appreciate its strengths and weaknesses. It’s stiffer, which results in a negative first impression, based purely on comfort. After you ride it a little longer, you realize that it’s more stable at speed and has less chassis movement. It still initiates turns with very little effort and has less squat under acceleration. Plus, once you get more time on the frame, it loosens up a little, and the rigidity becomes less of a factor.

The two-stroke frame, as we said, is different from the one used on Husqvarna’s four-stroke motocrosser. It’s not as stiff-feeling, but you have the further compilation of a two-stroke power delivery. The one inescapable shortcoming that all two-strokes face is that they can’t duplicate the tractability and stability of a four-stroke. For a variety of reasons, a four-stroke also is less demanding of its suspension. The TX is no different in this regard. If you find yourself in a bar-to-bar drag race with a four-stroke across dry, rough terrain with square-ended holes and sharp impacts, the four-stroke will go straighter and hook up better. The TX will hop from hole to hole and lose drive.

We still like the TX’s suspension overall. It handles big impacts extremely well, and the fact that the air fork has infinite adjustability allows you to tweak and fiddle to your heart’s content. Even the reduced travel is, in our minds, a good trade-off. For that unnoticeable reduction in travel ,you get a clear and obvious lowering of the seat height, which even tall riders love. But, if the TX has any real room for improvement, it’s in the suspension department. We know there are a number of aftermarket kits and tuners who can improve both the front and the rear.

The Husky TX300 is the prototype for all two-strokes moving forward. We know we are facing big political challenges in the near future, but at this point, two-strokes and four-strokes are more or less in the same boat. The fact remains that two-strokes are so important to Husqvarna that development has been nonstop. The TX is an undeniable improvement, and we are certain that it came with a substantial investment. That makes us happy. Two-strokes are important to us, too.