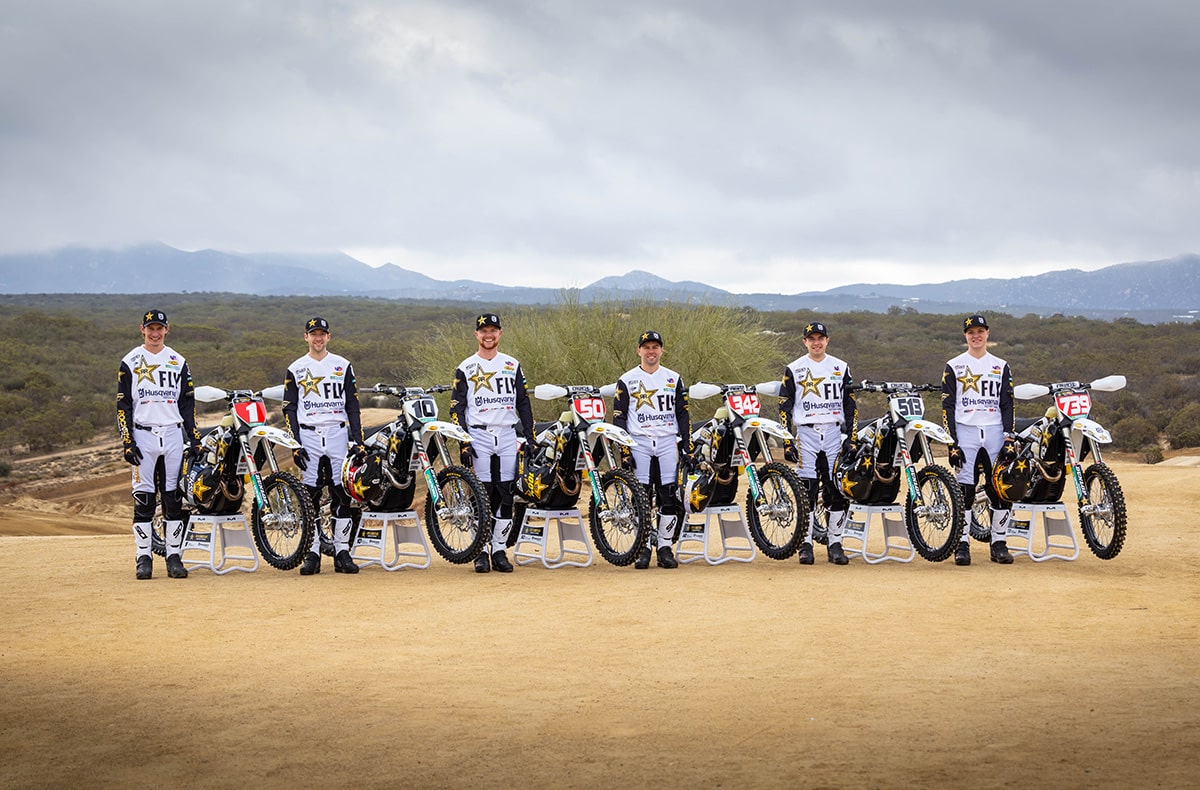 Rockstar Husqvarna announced its 2023 off-road racing team, which will include six riders covering races throughout the U.S. The official press release follows:

Anthony DiBasilio, Rockstar Energy Husqvarna Factory Racing Team Manager: “I’ve got my first full season under my belt as a Team Manager and I’m excited to apply what I learned to the 2023 season. We have a strong team that’s capable of winning races and championships in every discipline we enter. I have no doubt that each one of our riders will achieve their goals in 2023. The mechanics and all the team personnel are determined to make 2023 a standout year. Let’s go racing!”

Returning to the GNCC and National Enduro series for his sophomore year in the premier Pro division is Pennsylvania native Craig DeLong. Building off of a strong 2022 season in both series, DeLong is knowledgeable of what it will take to consistently put his FX 350 on the podium in 2023.

Craig DeLong: “I’m excited for the upcoming season! After a full rookie year, grabbing some podiums and being a runner-up in the GNCC XC1 class, I’m ready to be battling for podiums and wins consistently all year long and to be in the championship hunt. The FX 350 also has some exciting changes that I’m looking forward to going into the 2023 season.”

Like DeLong, teammate Trevor Bollinger will also be returning to the GNCC and National Enduro series aboard the FX 350. Bollinger suffered through a challenging year in 2022, sustaining an injury halfway through the season, but the North Carolina native collected some impressive results to close out the year and he looks to come out swinging in the new season.

Trevor Bollinger: “I’m looking forward to the 2023 season. It is going to have its challenges coming off of an injury, but I’ve been here before and I’m confident that I will come out stronger than ever.”

Austin Walton will certainly be a championship contender on his FX 450 in 2023, finishing runner-up last year in the NGPC series. Walton will also be entering the West Hare Scramble series this season, which will be a change of pace for him but with a background in hare scrambles, the Nevada native will get up to speed quickly.

Austin Walton: “I’m very excited to be walking into 2023 healthy and with a really good base in the off-season. I’m super excited to pick up a new series for this next year with West Hare Scrambles, going back to the old roots of what I grew up doing, while keeping the NGPC as the second series and jumping on a new re-vamped bike for the new season. I’m very excited to put that new R&D to work and start getting some wins and championships with those bikes. I’m feeling excited for the season and ready to kick it off!”

Making his return to the Rockstar Energy Husqvarna Factory Racing team, California’s Dalton Shirey will join teammate Walton in the NGPC series for the upcoming season. The 2022 National Hare and Hound Champion will also look to retain the #1 plate in the series and keep his FX 450 on top of the podium in 2023.

Dalton Shirey: “I’m super excited for 2023. The possibilities are endless. I’m super thankful for Anthony DiBasilio and the whole crew for seeing something in me and giving me this chance to once again be a part of the team. I can’t wait to start working with everyone again!”

Colton Haaker: “I’m excited for the 2023 season for a lot of reasons, getting back to winning being the biggest! The team, new bikes and morale are on point. Now it’s just a matter of execution!”

Last but not least, Ryder LeBlond is the youngest and newest member to the team. The Pennsylvania native will be competing in the U.S. Hard Enduro and EnduroCross series alongside Haaker for 2023. Determined to showcase his speed and skill atop the podium at all the races he enters, LeBlond will be riding an FX 350 in the EnduroCross series and a TE 300i in the US Hard Enduro series.

Ryder LeBlond: “I’m really looking forward to the 2023 race season. After 2022, I’m hungry for some wins in the Hard Enduro and EnduroCross series! I can’t wait to get the new season going with the new team, keep making improvements and grow with the team and everyone involved around me!”

Antti Kallonen, Director of Offroad Racing: “Our team is ready to shine come the 2023 season. I’m looking forward seeing our athletes up front, led by Anthony who proved that he is a perfect fit to manage the Rockstar Energy Husqvarna Factory Racing squad this past season in his first season as manager. We have improved our program from all aspects, including strengthening our partnership with Ranch Russell to ensure our athletes are physically and mentally ready to win races and championships.”