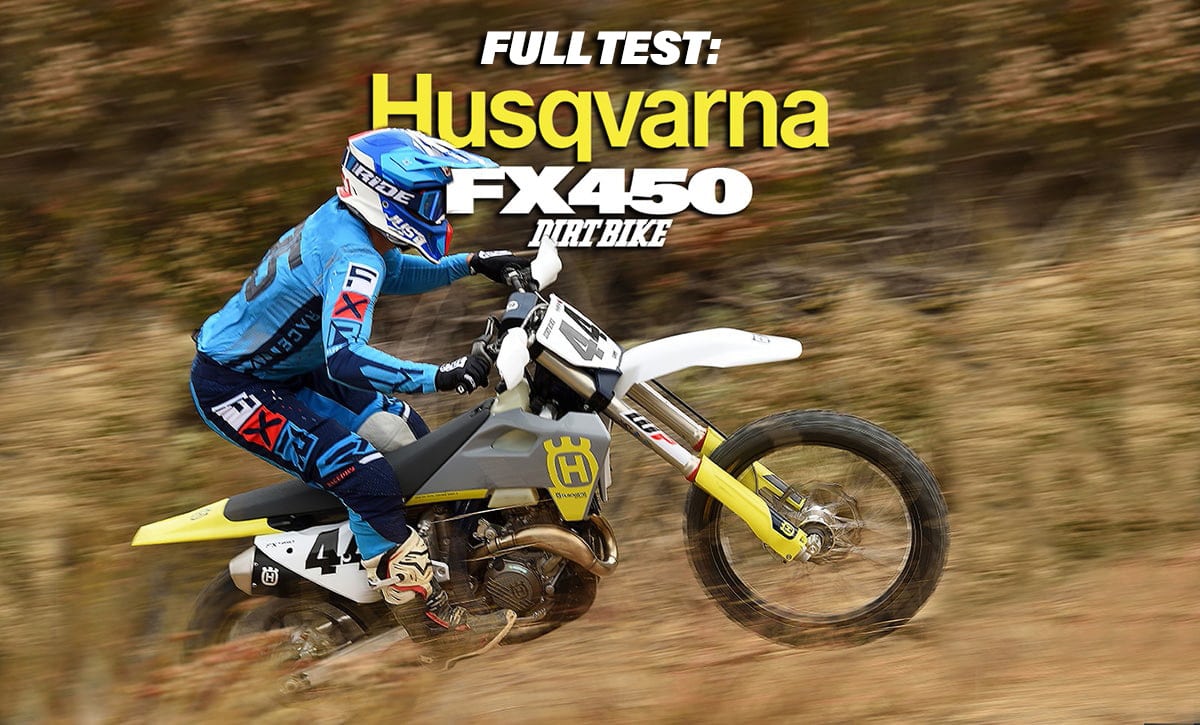 There was a day when Husqvarna motorcycles reigned supreme in the toughest off-road races in America. From Baja to Elsinore, from J.N. Roberts to Malcolm Smith, Husqvarna was the bike of choice. If any bike today ties into that legacy, it’s the 2023 FX450. This is Husqvarna’s premier off-road race bike for the current generation. Riders like Dalton Shirey, Trevor Bollinger and Austin Walton are striving to be the Husqvarna legends of tomorrow, and the FX450 is the bike they are counting on to take them there.

Husqvarna hasn’t taken a straight path from the days of J.N. to here and now. Ten years ago, Pierer Mobility (parent company of KTM) rescued the brand from the brink of disaster. Along the way, much of the Husqvarna identity was mixed with KTM’s. The current FX450 has a close kinship with the KTM 450XC-F. Like that bike, the closed-course FX450 comes ready to race right out of the box. Despite those Austrian roots, the Husqvarna’s appearance is its own; it has a natural-white standout color blended with neutral gray and frightening yellow over proprietary bodywork. Husqvarna’s competition models (meaning the FC motocross bikes and the FX cross-country racers) also differ from their KTM siblings in seat height and suspension travel. The Huskys are slightly lower, which is accomplished through a shorter WP Xact air fork, a different shock head and different linkage. The difference isn’t dramatic but works out to about 15mm at the center of the seat. The list of shared parts across the entire Husky/KTM competition line is much longer. 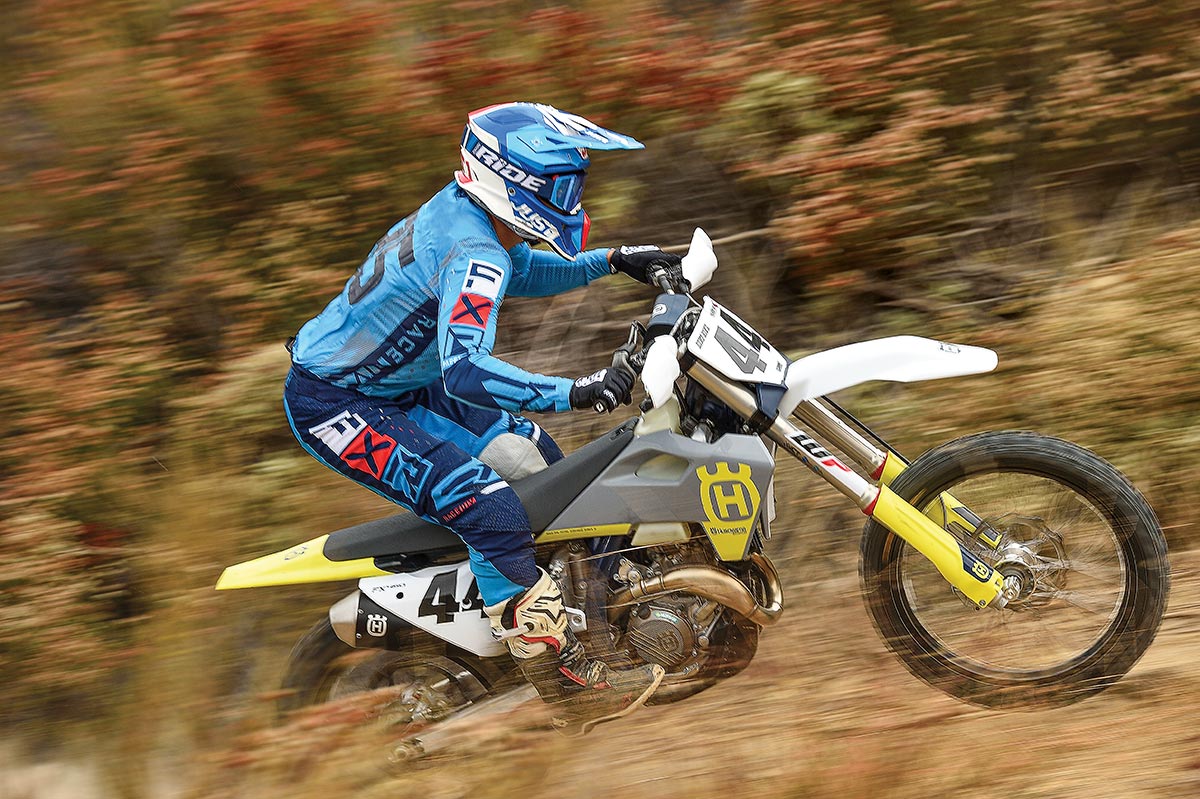 The FX’s frame and motor are the same as those of the KTM 450XC-F, which in turn are the same as those of the motocross-oriented SX and FC lines. To assure us it’s an off-road motorcycle, the FX comes equipped with an all-black, 18-inch Dirt Star rear rim, a 2.24-gallon fuel tank, a skid plate, handguards and off-road-specific suspension valving. But, did the group of engineers at Husqvarna focus too much on their motocross model and just slap on the minimum off-road necessities?

For this year’s model, Husqvarna went with a new chassis design and a heavily updated motor package. The new motor is now slightly tilted at a 2-degree backward angle from previous years, which helps alleviate the “squatty feel” of the past. That also drops the countershaft 3mm. The Husky boasts an all-new rear suspension design; a two-piece polyamide-aluminum subframe; and a new, hollow, die-cast aluminum swingarm, which is supposed to help give a stiffer feel overall and shed 190 grams of weight. All that might give the impression that the FX450 shaved off some of its winter weight. Not so. At 233 pounds without fuel, the new bike weighs slightly more than its predecessor.

Sticking to tradition, the FX comes equipped with an easy-access airbox combined with a Twin Air filter, a Brembo hydraulic clutch, D.I.D rims and Dunlop AT-81 tires. The Austrian engineers don’t shy away from technical advances, coming up with a redesigned map switch located on the left side of the handlebar, which gives the rider a chance to alter the bike’s personality at the touch of a button. The FX450 also has traction control and the all-new Quickshift function, accessible from the same multi-switch. Quickshift is described as “a function, only worked while upshifting, that alters the ignition for a fraction of a second, thus allowing the motorcycle to be shifted without the use of the clutch while the throttle is held wide open. A new sensor on the shift drum senses the engagement and sends a signal to the ECU, which gives an interruption to the ignition timing.”

SUMMING UP THE PARTS

If there’s one thing to rave about with the FX450, it’s the motor. The FX has a mellow power delivery in map one—the gray map—that allows the motorcycle to rev out smoothly. This lets us find a sweet spot in the motor and ride it more aggressively for far longer periods of time. When you switch from the gray map to the green one, it allows the motorcycle to feel more open and high revving compared to years past. In either map, the FX’s peak power leaves you wondering, “Is this the FC450?” The power, in fact, is virtually identical to that of the motocross version, as is the 5-gear transmission and even the sound of the exhaust. In the past, the Husky 450 wasn’t known for having especially strong bottom-end power. This might be the FX450’s new strength. Again, we find ourselves wondering if this really is an FC model with a few off-road items. The FX model can line up at your local motocross track and be perfectly at home.

When it comes to any motorcycle, it’s a must to have proper setup for specific terrain. The hard part is deciding which kind of terrain to plan for. The FX’s mission is to work everywhere. Its re-engineered geometry and flex characteristics might help it in some areas but hurt in others. Stability is one of the winners. At high speed, the FX never strays from its course. But, the new chassis gives a disturbing amount of feedback to the hands and feet. From slow-speed technical riding to high-speed chatter, the choppiness is relentless.

Setting the comfort issue aside, the latest-generation WP Xact air fork and a newly designed rear shock exhibit decent hold-up in the most distressed situations. That further contributes to the bike’s overall stability. The fork is easy to set up with an air-pressure gauge, and the one-of-a-kind shock collar helps riders set their race sag in minutes. It’s so easy to alter, in fact, you can easily get lost. We chased the settings on every session. When you try to address the harshness, you compromise the bike’s balance and the overall handling. The Xact fork has never been one of our favorites when it comes to off-road riding. If there is any off-road-ready model to blitz a set of whoops at A1, then this is it. Its slow movement, extreme amount of hold-up and stiff chassis all point towards motocross more than off-road. In stock form, the FX450 is more suited for a main event behind the lights than a campground play ride. 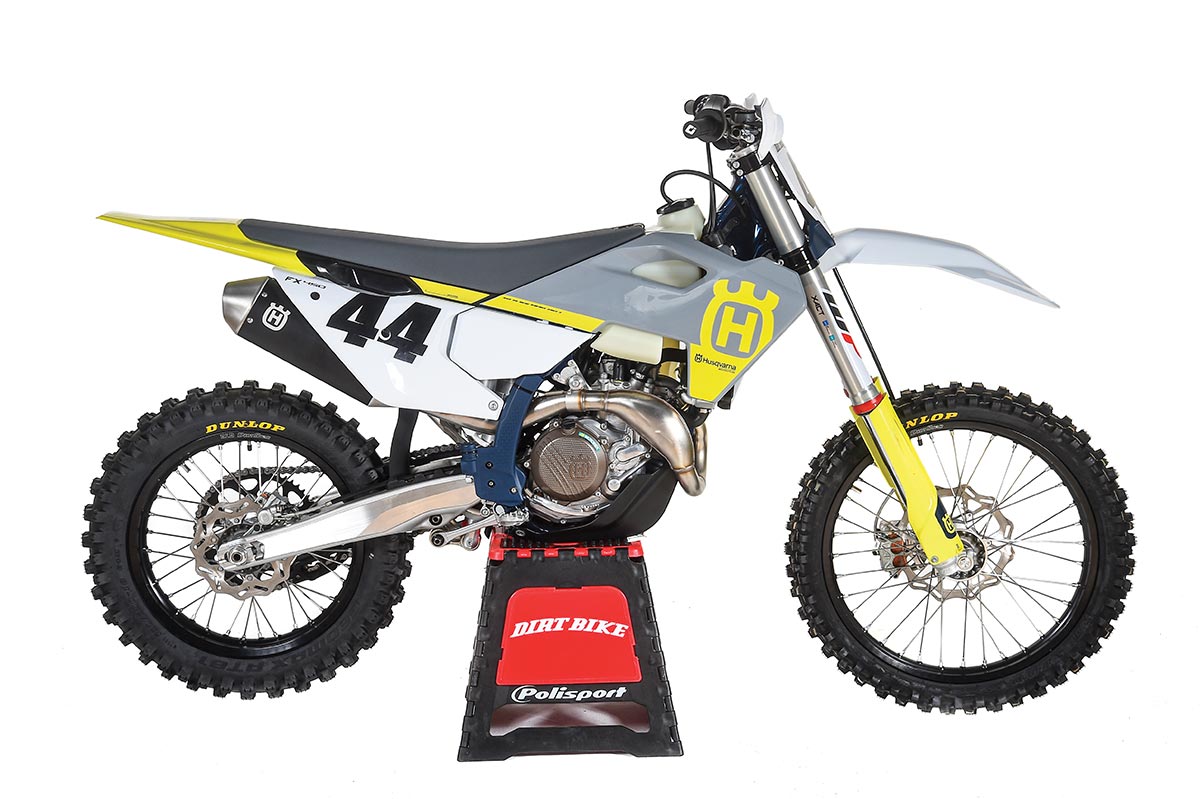 RIGHT BIKE FOR THE RIGHT PLACE

Just as it presents itself, the FX450 is a purpose-built off-road assassin to be used in closed-course racing. It will see competition at the likes of GNCC, NGPC and races across the desert floor more often than casual weekend trail rides. This particular model is meant for the high-intensity, driven racer who wants to ride it to its full potential. Not to say a C rider won’t have fun; we just might point you in the direction of toning it down. As a side note, the people at Husqvarna know that the FX is a hardened racer, and for the first time, have an alternative for the weekend trail rider or a seasonal desert enthusiast. The FE450 is a model that uses the previous frame with a 6-gear transmission, headlight and a more trail-friendly disposition. The fact that the FE450 exists more or less gives the FX450 a green light to be a hard-core piece of competition equipment aimed at the elite racer. If that’s you, the FX450 is looking for you.