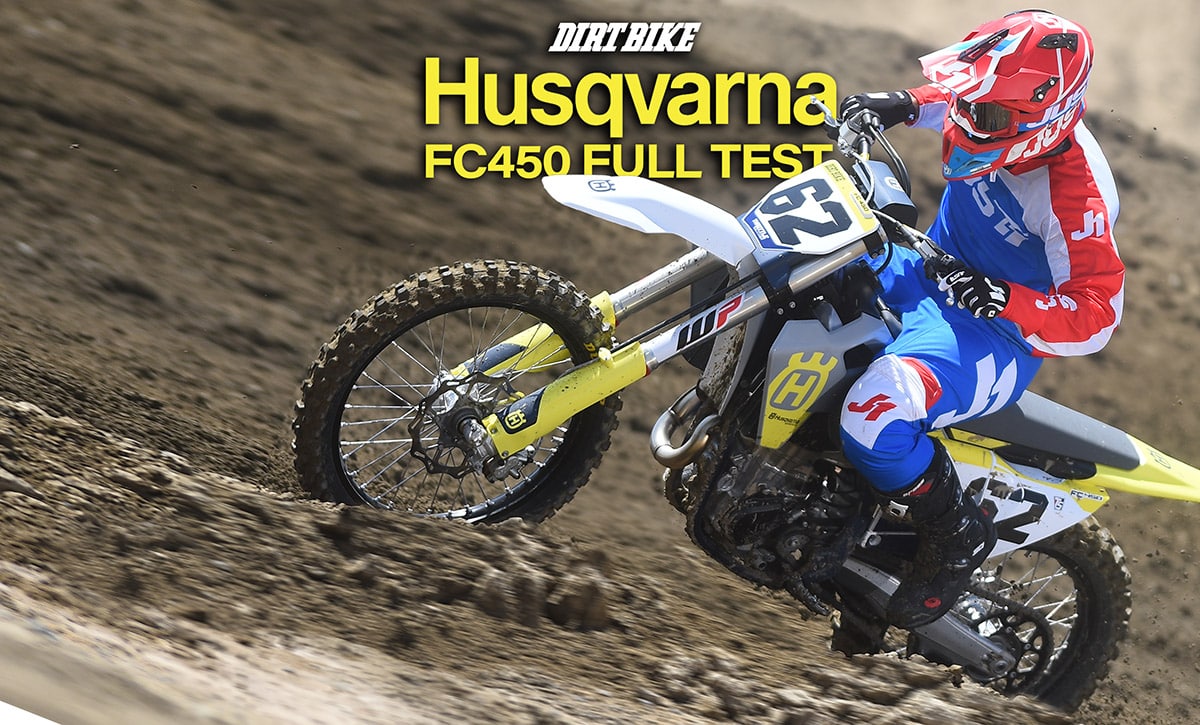 The 2023 Husqvarna FC450 is the first redesign in the FC450’s short history under the Pierer Mobility Group. It was developed and released at the same time as KTM’s new 450SX-F, of course, so many people paint it with the same brush. Is that fair? In some ways, yes, in other ways, no.

THE NEW DEAL
The 2023 Husky FC450 arrives as a part of a massive top-to-bottom overhaul of the combined Husqvarna/KTM lineup. The company is all in with the new chassis, as you can read on page 38. After those initial impressions, we focused specifically on the FC450 to try to learn as much as we could about the new platform. The frame is new, but it wasn’t like anyone hated the old one. Husqvarna kept the idea of a steel frame with a central backbone, but you can see that this frame takes some of its influence from the aluminum twin-spar frames on most Japanese bikes. The frame members around the swingarm are massive, and they make their way to the steering head in a much more direct route than previously. The top shock mount is connected to those frame members with an independent tower—very Yamaha-/Kawasaki-like.

The motor sits in that chassis at a different angle now, too. The whole powerplant has been tilted rearward 2 degrees, which moves the countershaft sprocket downward 3mm relative to the swingarm pivot. Husqvarna also redesigned the swingarm, reduced the axle size and reconfigured the subframe. Motorcycles in the Husky brand still use a subframe that is a composite construction, mixing polyamide plastics and aluminum—it’s become a signature feature. There has been a trend towards more aluminum in the structure in recent years, and the weight difference between the Husky and KTM subframe/airbox has become negligible.

The suspension is mostly new, although the fork remains the WP Xact air fork with the damping functions in the right and the air chambers in the left. The hydro-lock anti-bottoming design is new and progressively increases damping in the last 40mm of travel. On the other end, the shock is completely new. It’s 455mm long, which is 15mm shorter than the previous one. This connects to new linkage. For the standard Husqvarna models, the linkage and the travel in that shock have been altered in order to reduce the bike’s overall seat height. Husky engineers claim that the overall rear-wheel travel is reduced by 7mm compared to the Rockstar Edition, and the fork travel is lessened by 5mm. The seat-height reduction is undeniable—Husky claims 15mm, which is accurate by our measurement with the suspension extended. On the track, it seems like much more. We haven’t physically measured the suspension travel, although we suspect the reduction is greater than the claimed figures.

As for the motor, it has a long list of changes, but it is basically the same layout and design as the previous model. The head is new, the crank is new and the gearbox is new. It has a redesigned exhaust system, and the electronics package has some new features, as well as new handlebar switches. Quickshift is a new feature for a dirt bike, although it’s been seen in the street bike world for several years. This interrupts the motor for a split second in order to make full-throttle upshifts smoother. It isn’t in play for the shift from first to second, and it can be disabled with the push of a button. The same handlebar switch also offers two maps—traction control and launch assist. The starter and kill switch are now on the right side of the bar, sharing the same housing.

Finally, the bodywork is all new. Unlike KTM’s new plastic, the Husky features a flat cover over the shock reservoir that is designed to offer more gripping area for the rider’s legs. It can be removed quickly for shock access.

Husqvarna still uses a number of suppliers that differ from those on KTM models. The handlebar is ProTaper and the rims are D.I.D. Between those items, the seat height and the subframe, the Husqvarna has a very different appearance and feel from the new KTMs.

THE HUSKY IDENTITY
The first question everyone asks about the new Husky is about the frame. In the wake of Cooper Webb’s fall from the top of the Supercross world, there’s a perception that KTM, at least, took a step backwards. Is it true of the Husky as well? It depends on the track and the rider. Up front, we will admit that on most of the tracks where we typically ride, the dirt is hard-packed. There’s not much mud this time of year in SoCal, and sand tracks are few and far between. On hard soil, most riders feel an increase in frame rigidity. This puts a little more emphasis on fork and shock setup. The knee-jerk reaction is to decrease compression damping. For most riders, this works well.

When we tested on sand tracks, the perception changed. The chassis no longer felt harsh. In fact, the overall stability was excellent. Normally, sand tracks require stiffer suspension settings. In this case, riders could get away with the same settings used for hard-pack tracks, which were, for the most part, softer than stock. The more rigid chassis eliminated much of the wallowing that riders complained of with previous-generation Husqvarnas and stock suspension.

Having said all that, the new chassis does place more burden on suspension setup. The WP Xact air fork already gets mixed reviews from many test riders, and the new chassis doesn’t do it any favors. The good news is that it’s the most adjustable fork in the world, and if you do enough testing, you can find a setting you like. We also know of several riders who have installed WP’s spring conversion kit with great results. As for the Husky’s overall handling, it turns and behaves much like the previous model. It should; the geometry is unchanged. It’s still a great-turning bike with light, easy steering. Under hard acceleration, the new engine location results in an anti-squat tendency, but it’s subtle, and many riders don’t notice. Almost everyone notices the reduced seat height, on the other hand, and they love it. They notice when swinging a leg over the seat, they notice on the start line, and some riders even notice in turns. Theoretically, there’s a downside in ruts where you might catch a foot. In real life, we didn’t experience this. Another change for the frame is that the new footpegs are tucked in a little tighter, giving the bike more rut clearance.

THE POWER AND THE GLORY
Husqvarna found a little more power for 2023, and stashed it away in the second map. Map one has a power delivery similar to that of the 2022 model. Map two piles more on top, and that can be a handful. Some riders can never get enough power, and for them, map two is like a cheap Disney ride. You can compromise by using map two with traction control, but this is only effective on hard-pack tracks. Traction control on a sand track can create a slight hesitation followed by a power surge that can actually make the power delivery more of a sudden rush.

In most other ways, the new FC450 is exactly what we’ve come to expect from Husqvarna. The Brembo hydraulic clutch is excellent, the brakes are strong, and we love the quality and feel of the Pro Taper handlebar. It’s still a very high-quality motorcycle with parts that are as good or better than anything on the aftermarket. Where it will sit in the overall hierarchy of the 450 class remains to be seen. There are big changes in store for 2023, and the Husky will have more competition than ever. It’s going to be a very good year.