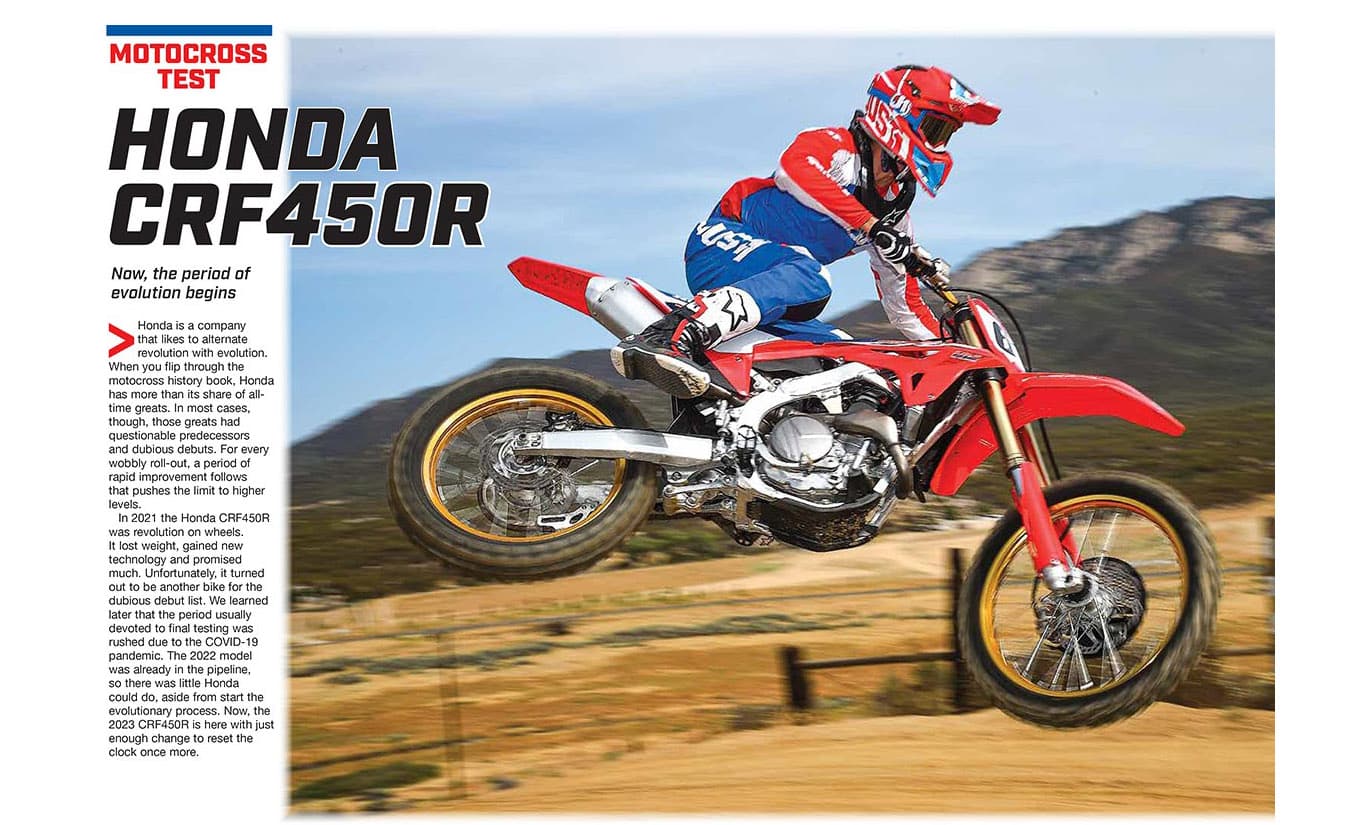 Back in 2021, the Honda CRF450R was revolution on wheels. It lost weight, gained new technology and promised much. Unfortunately, there were issues. We learned later that the period usually devoted to final testing was rushed due to the COVID-19 pandemic. The 2022 model was already in the pipeline, so there was little Honda could do, aside from start the evolutionary process. Now, the 2023 CRF450R is here with just enough change to reset the clock once more. 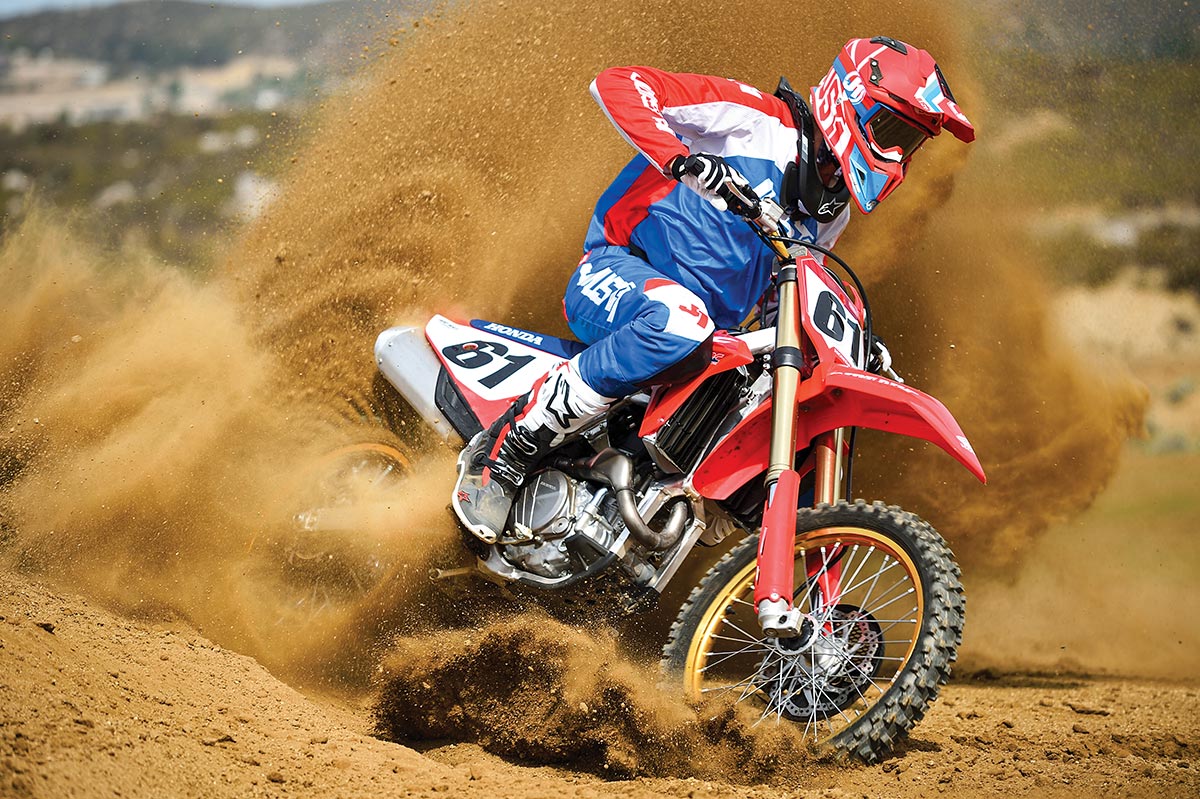 All the big design features from earlier models are still here. The CRF450R still has a downdraft intake system that draws clean air over the top shock mount and eventually leads to a centrally located exhaust port. The Unicam valve train uses one cam and a series of finger followers to operate titanium intake and steel exhaust valves. For 2023, the intake ports were reshaped, the throttle body was downsized (from 46mm to 44mm), and the cam profile was redesigned. Honda also redesigned the muffler with a new interior design and a heat-treated outer housing.

One of the big advancements for 2021 was the clutch. It got an extra plate and hydraulic actuation via a Nissin master and slave cylinders. Thankfully, that’s still here. We expected this to come long ago; all the factory Honda motocross bikes have been hydraulic for years. That is unchanged for 2023. Likewise, the Honda kept some of its interesting, if offbeat, designs. The battery is located outside the airbox, behind the cylinder and the air-filter element faces downward. Increasingly, mapping changes are more important each year. The CRF450R still has three maps, three levels of traction control and three levels of launch control, all of which can be selected via handlebar-mounted switches. All three of the overall maps have been altered for 2023.

On the chassis side, Honda engineers devoted most of their attention to frame flex. The thickness of the material at the upper front frame joint, just below the steering head, was increased, as well as around the upper shock mount. The engine hangers are now steel instead of aluminum. And, of course, the Showa suspension has new valving at both ends. In the rear, the shock spring was increased from 54 N/mm to 56.

Our test bike was a 50th Anniversary Edition, which was produced to honor Honda’s first AMA championship with Gary Jones. The bike is mechanically identical to the standard version, but has a blue seat, gold rims, a gold handlebar and special graphics. The price for the standard edition is $9599, and the 50th Anniversary Edition is $300 more. To further drive dealers crazy, Honda has two other 450 motocross bikes available. The CRF450RWE is the Works Edition, which features performance upgrades. It sells for $12,299. The CRF450R-S is a more price-driven model that sells for $8799. The R-S is actually identical to last year’s standard edition.

To get a grip on the 2023 CRF450R, you have to know a little about the previous version. When you got off the 2021/2022 model, you were generally shaking a little. It was a very fast motorcycle. Beyond that, it felt even more powerful than it was. The bottom end was nothing special, but then it ramped up hard and fast. It was easy to stall and had an occasional hiccup in the power delivery. Soft rear suspension and nervous overall handling added up to a bike that was demanding, even for the best riders.

All of Honda’s changes to the throttle body, the mapping and the motor were designed to address this. The results of that effort are an unqualified success. The Honda is as powerful as ever, but it’s no longer spooky fast. Low-end power is increased, and it ramps up more gradually. Don’t misunderstand us, though. It still hits very hard. Sometimes you have to back out, but at least now you have the option of doing that with throttle control. Before, it was off or on, prompting the rider to modulate power with the clutch rather than the throttle. The three maps are more useful as well. The standard map is still our favorite, but you can go to map two for a more gradual power delivery or map three for more spark. The differences aren’t dramatic, but they are noticeable. If you accidentally leave it in the wrong map at the start of a race, it’s certainly not the end of the world. Traction control, on the other hand, isn’t especially effective unless you are dealing with a blue-groove practice track. In sand, it dumbs down the power delivery too much.

Don’t expect the changes to the frame to result in a dramatic difference in handling. The Honda still handles like a Honda, which some riders love and others struggle with. It’s an agile-feeling bike that steers quickly. The bike weighs 233 without fuel, which is the lightest of the Japanese 450s. It’s still a couple of pounds heavier than the new KTM and a whopping 10 pounds heavier than a GasGas. The numbers don’t really mean anything in this case, though, because you don’t have to work very hard to drop the CRF450R into a turn. It steers well with the throttle off or on. Conversely, it has a tendency to wander at speed and occasionally head-shake. Not all riders complain about this. It all depends on the type of tracks you ride. You can tell, there’s a lot of Supercross baked into the Honda.

The suspension changes are another unqualified success. The stiffer shock spring balances out the bike well. The Honda is particularly sensitive to balance. When you get the shock ride height right, it calms the bike down in straights and allows it to track better in turns. Most riders like the ride height a little on the low—generally, more than 105mm of race sag—but not everyone. Justin Jones has a great deal of experience with the Honda and likes the rear high and stiff in order to make the bike turn even sharper. He’s a big rider, though, and has the strength to manhandle the bike in the straights.

The Honda still leans heavily towards pro riders and Supercross-style tracks, but we’re pleased with everything the Honda engineers did to the CRF450R for 2023. They dealt with all the sore spots and made improvements on all fronts. At the same time, the things that we love about the bike are as impressive as ever. We still love the clutch, the brakes and the overall comfort factor. This is the beginning of an evolutionary process that we’ve seen many times before. We’ve learned to trust the process.