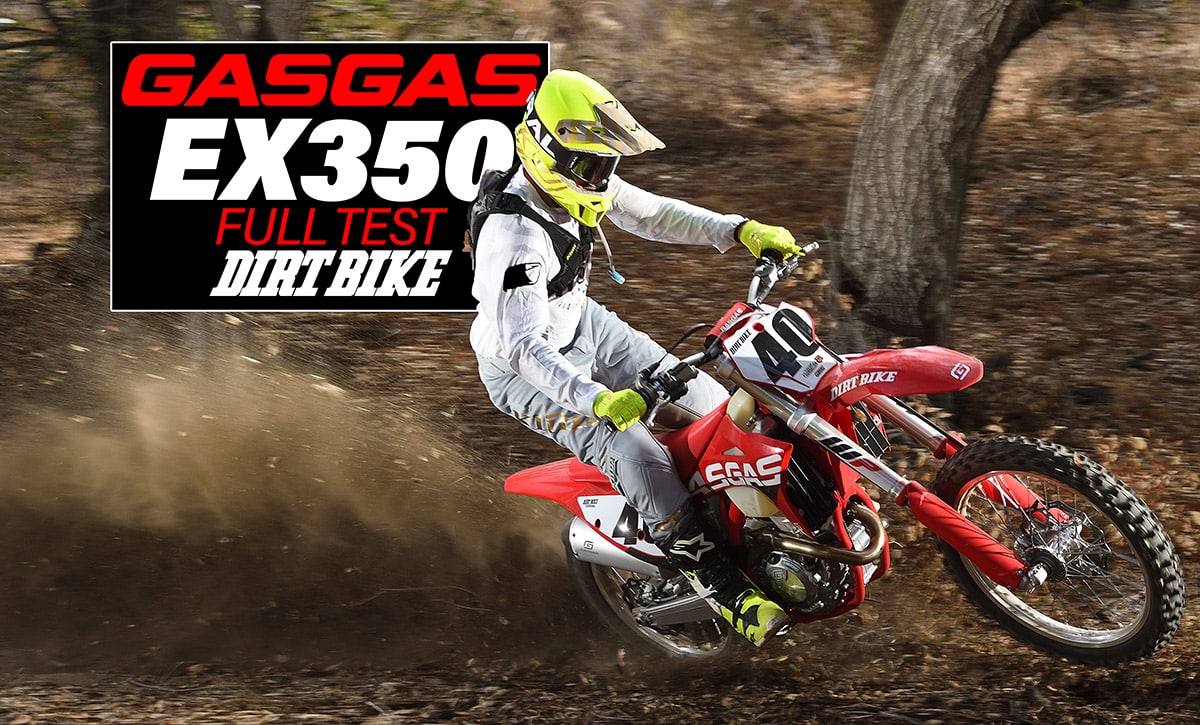 We’re disappointed in the state of corporate espionage in the off-road world. You would think that after more than 20 off-road championships, someone from Honda, Yamaha or Kawasaki would have snuck into the KTM, Husky or GasGas pits and yelled, “Hey, guys, it’s a 350! Who knew?”

So far, only the three Austrian brands in the Pierer pits seem to know that a 350 is the ultimate size for off-road racing. Good for them. Unfortunately, it doesn’t leave us with much choice. From the moment they joined hands, the GasGas EX350F, KTM 350XC-F and Husqvarna FX350 have been more alike than different; they used the same frame, the same motor and most of the same parts. But, that’s changed for 2023. The GasGas is now distinctly different from the other two, a feat that was accomplished by standing perfectly still. The 2023 competition off-road bikes from KTM and Husqvarna are completely new for 2023, while the GasGas EX350F is unchanged. The parent company did this to keep the price down, but as it turns out, it gives GasGas a distinct advantage in the eyes of many riders.

GasGas became part of the Pierer Mobility group in 2019. The company already had KTM, Husqvarna and WP. The primary target of the acquisition was the GasGas trials line, but corporate execs also saw this as an opportunity to offer a brand that was more price-friendly. KTMs were expensive and Husqvarnas were more expensive. So, model for model, GasGas motorcycles carry lower MSRPs than others. The 2023 GasGas EX350F sells for $10,799. That’s certainly not cheap, but it’s $600 less than the current KTM 350 and $700 less than the Husky. In order to do that, the GasGas does away with handguards, the skid plate, the map switch and the resonance chamber in the exhaust head pipe. GasGas also swaps out some name-brand parts for generic ones and has cast triple clamps. Cynics point out that if you wanted to buy all those items for your GasGas, they would cost way more than the $600 price difference, but that’s really not the main point this year. Now, the GasGas is the failsafe choice for riders who don’t yet trust the first-year redesign of the Husky and KTM.

It’s hard to find an off-road motorcycle that’s more proven than the EX350F. Even though the bike only came into being in 2020, it’s the same platform that was used to win title after title in GNCC, EnduroCross and National Enduro. It’s still based on the MC350F motocross version with a short list of changes to make it more suitable for off-road. It has a six-speed gearbox rather than a five-speed, an 18-inch rear wheel, more fuel capacity and a kickstand. It doesn’t sound like much, but this has been a trend in the recent movement towards closed-course off-road bikes. This formula generally results in a bike that’s perfect for cross-country racing, but too aggressive for casual trail riding. In this case, that’s not true. The EX350F is one of the few bikes that can do both.

The 350 motor has multiple personality disorder—in a good way. A beginner can ride the bike and come away with the notion that it has a mild, smooth power delivery and a pleasant demeanor. An expert can get on the same bike and go into full-aggro race mode, beating 450s from corner to corner and winning pro races. That’s because the 350 motor has an unnaturally wide powerband. An expert will rev the bike to hypersonic levels around 13,000 rpm where it makes well over 50 horsepower. It wouldn’t even occur to a beginner to rev the motor that high. He will shift at 9000 rpm and feel he’s gotten all he needs. A 450 has a much narrower usable powerband. If you attempt to ride at low revs, you’re in constant danger of stalling. You can stall the 350, but only when you’re being sloppy.

Most riders will never miss the map switch. The GasGas still has two different maps pre-programed into the ECU, but we know from past experience that if you buy the switch ($170) to access map 2, the gains are negligible. The power delivery is different but not necessarily better or worse. Handguards should be much higher on your to-buy list.

In the chassis and suspension department, the GasGas is pretty much ready to ride. The bike comes in at 225 pounds, as weighed on our scale without fuel. That’s pretty amazing considering that most 250 motocross bikes are over 230 pounds without things like kickstands and fat rear tires. That results in a bike that’s easy to toss around. This chassis is known for its cornering ability, and the smooth, long power delivery makes it easy to get back on the gas after you get through the turn. As usual, suspension setup is critical and highly subjective. Both ends are a touch softer than we expected based on our experience with previous KTM and Husky 350s. That’s not such a bad thing for a bike that is designed to appeal to a wide range of riders. Stock settings are a great starting point. The recommended air pressure for the WP fork is 142 psi, and the sag is supposed to be at 105mm. That’s a good balance for aggressive trail riding. For racing, you can go as high as 160 psi in the fork. You can bump up the shock preload to, maybe, 100mm when you do that to maintain balance, but you should increase both high- and low-speed compression damping first. Coming up with a standard setting that suits all riders on the off-road spectrum is impossible, but GasGas starts off with a great compromise.

OKAY, WE STILL LOVE IT

There’s no sense in denying the fact that we love this motorcycle. If you only have room for one dirt bike in the garage, this is it. You can take it on a long trail ride or go racing without giving up anything in either world. Someday, we are certain that manufacturers in Japan, Italy, France and Spain will catch on and offer 350s of their own. When that happens, the GasGas EX350F will still be the benchmark that the others have to match.