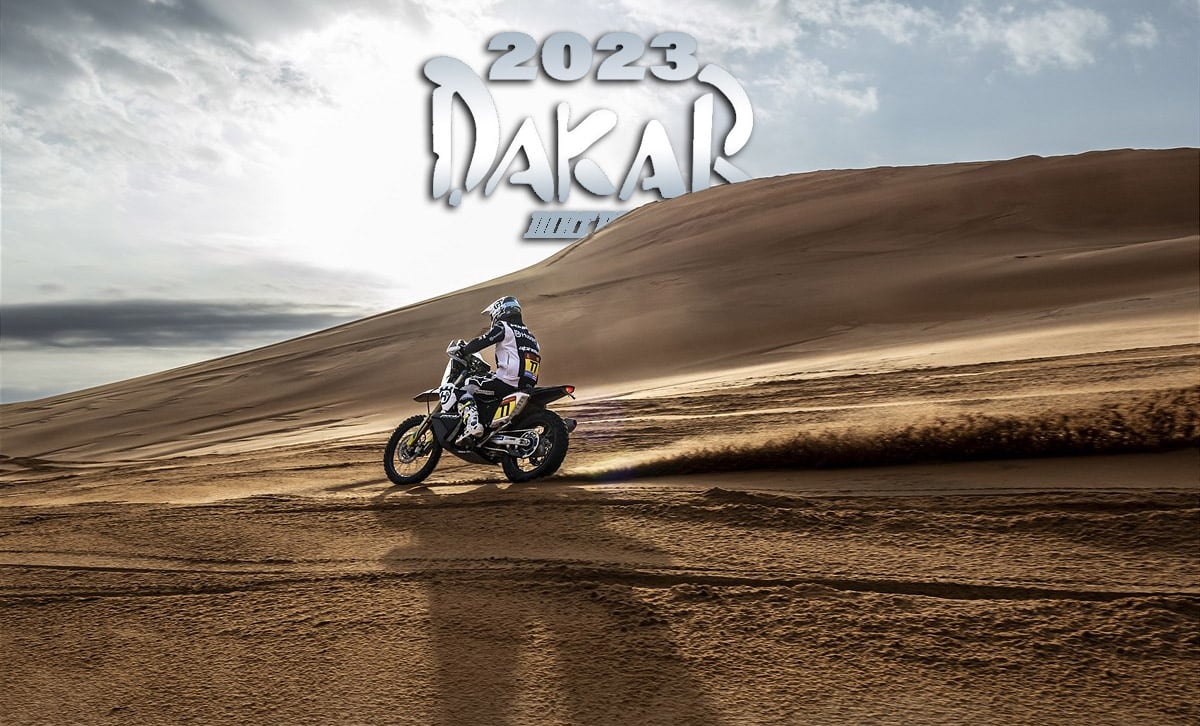 On stage 9 of the 2023 Dakar rally, a familiar pattern started to emerge. The riders who started up front–notably Ross Branch and Mason Klein–lost time to those who started further back.In fact, Branch and Klein rode together throughout much of the stage and even collided with each other near the end. Husqvarna teammates Luciano Benevidez and Sklyer Howes also rode together for much of the stage and had excellent results. Benevidez won his second stage and Howes was third behind Toby Price. The overall standings are closer than ever with Howes leading price by only 3 seconds. Klein drops back to sixth. Joan Barreda was a casualty of the day, crashing hard and being airlifted out.

Jason Argubright continues to turn in solid performances just outside the spotlight. “Didn’t ride the best in the morning then had some navigation troubles in the middle and rode fantastic in the afternoon pretty fast stage overall, the upcoming SS10 is now heading towards the “empty quarter” of Saudi which is basically going to be a dune fest for the next 3 days. First competitor leaves tomorrow at 3:30am for a 467km liaison.”

Luciano Benavides: “I’m really happy. I cannot believe I won again, and to be the first rider at this Dakar to win twice feels incredible. It was a really hard stage with a lot of navigation – you really had to focus on your road book to make sure you didn’t make any mistakes. There were a lot of broken tracks and different lines, so it was easy to take a slightly wrong line. Now I am opening the stage tomorrow, so it will be full gas all the way to the finish.”

Skyler Howes: “The stage today was pretty tricky. We hit a section where we were missing one waypoint and it was in a place deep with stones and a lot of mud. It was tough to navigate through there and I knew we were going off the CAP heading a little, so I had to circle around to get back on track. Luciano caught up with me then and riding together we really put the charge on, partly because I thought I had lost a lot more time than I had. We did a good job all the way from the refueling to the finish. The ground out there was incredible – there’s been so much rain, in some places it was like riding through giant rivers. It’s been a challenging day and I’m sure there will be plenty more to come as we make our way to the end.”

Mason Klein: “I don’t really know, I think I crashed somewhere near 300 km. I just kind of don’t remember what happened. I remember that I ran into someone; I think it was Ross. I think we came together. It’s just my arm that kind of hurts, so we’ve wrapped it up. My roadbook fell out of my vest at the beginning of the race, for the second half. I felt like for the whole time we were going slowly because I wasn’t doing any navigating. I didn’t know if the navigation was difficult or not. I just had to sit with everybody. Because of that we were all riding really close, making the chances of running into each other a lot higher, I guess. I feel okay, but I think I lost my helmet visor at the beginning of the day, I don’t really know. I think Ross and I just hit each other. It was frustrating”.

Toby Price: “It’s been a good day. The boys looked like they got lost just before refueling. I navigated through that really well. We were just trying to push really hard today and the next lot of stages are just going to be sand, I think, so all in all, it felt really good today. It was nice to get a good rest day in and come out for a good hit today. We’ll wait and see – there’s still plenty of racing to go. Everything felt great today. It was a little bit of a tricky one for navigation. I did go a little bit right just from the lines that I’d seen and was starting to notice we were going off the course a little bit. So, once I got a little bit close to the way point, I knew we were too far to the right and kind of got a little lucky. I went across one big bank and could see two trees that were marked with the way point. Basically, I just hoped and prayed that it was the right one and went in that direction and it validated pretty much straight away. All in all, we’re happy, but there’s still a long way to go. A few boys had some crashes today, so it’s not over until we get to that finishing line. I saw the crash – I didn’t see Barreda crash, but I saw he had crashed and saw him laying there. The first two guys who started in front of me had stopped for him, so there was no point for me to get involved. I just slowed down and tried to give a thumbs up to see if they were all good and everyone kept waving us on. It’s tough to get this far into the race and have that happen. It’s not the greatest, that’s for sure. At the end of the day, you can have a little bit of luck go your way. All in all, we made a good stage, where I thought we were starting to go off cap a little bit and too far to the right, but we were able to fix that mistake pretty quickly. We just charged all day and always hoped for the best. All in all, it’s come out pretty good.”

The American Rally Originals continue to ride, with Paul Neff turning in a good day. Often they don’t appear in the results until the following day–simply because they are still on the course. Stage 9 might have been the end of the line for Kyle McCoy, who was listed as “Excluded.” We will wait to see how that unfolds.