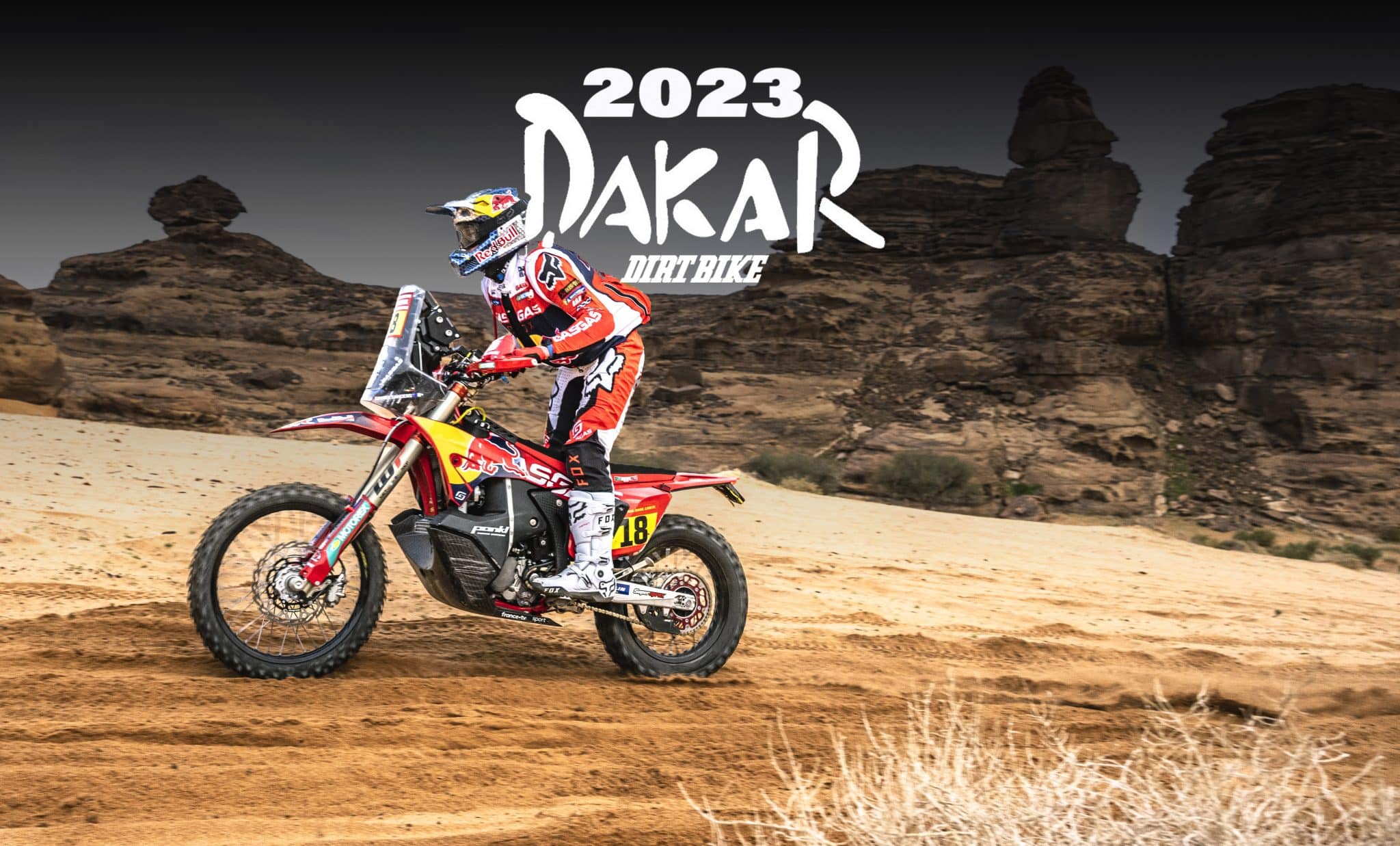 Monster Energy Honda Team suffered a major setback today during stage 3 of the 2023 Dakar Rally. Ricky Brabec was forced to abandon after a fall at 274 km of the special stage. He was rescued by helicopter and is safe at the local hospital. After all exams, the medical staff at Ha’Il hospital confirms he has no fractures or other severe condition. For precaution, he will remain under observation for another 24 hours, but his condition is good.

The stage itself was called to a premature end before all the competitors were able to finish. Approximately 40 of the motorcycle racers made it to the end of the Special before a storm forced the organizers to stop the race. Those riders who had not yet finished were assigned an estimated time of completion. As far as the riders up front, it was Daniel Sanders who was the fastest. He started ninth and was already in the adjusted lead by Km 47. Young American Mason Klein opened the stage for most of the day, and was the beneficiary of a new rule that rewards those up front with a time bonus. He had over 5 minutes deducted from his time at the end of the day and ended up third on the stage. Second place today went to American Skyler Howes of the Husqvarna factory race team. The overall standing are in in flux, but Mason Klein still appears to have the lead.

Mason Klein: “It was really good to open, I enjoyed every second of it. It’s so nice making all your own decisions. I felt really in control. I don’t know if I’ve ever navigated any better. This is a really good day for me. I like opening. I love it, I don’t know why. I prefer it. I feel I make less mistakes. I’m doing the work and it’s nice. The bonuses are nice. It’s been really great so far. The terrain was amazing. Not so rocky as yesterday. It was just a really good ride, I guess. Really nice views and I actually got to have a good look around today. The weather was perfect for riding, I think. It wasn’t too cold, it was amazing, a perfect day”.

Skyler Howes: “Mason definitely proved himself to be a Rally GP rider today. He did an incredible job opening the stage. He opened from start to finish. I caught him probably 100 km ago and then made one mistake, missing a way point and had to go back, to turn around and get it. I wanted to take something off his shoulders and open some of the stage, but I messed up and he got the task of opening the whole stage. He rarely made a mistake and did a really good job, so I’m super proud of the kid. With the weather there was a lot of rain clouds and it was overcast and the dirt was wet the whole time, but we managed to miss the rain the whole time so we didn’t really actually get rained on. It’s really tough for Ricky. This race has already proven itself to be a real challenge. It’s super unfortunate for him, but I hear that he’s okay, which is the most important part. It’s always tough to have a crash. You never want to see anyone go out like that. I’m glad that he’s okay, but, man, it really sucks”.

Daniel Sanders: “We struggled a bit at the start. It was really hard through the deep sand and rock. Then it was a case of pushing again. The goal was to get to refueling and find out where everyone was and then sort of pick up. The guys out front were doing a good job opening. I ended up as the third rider through the stage at the end, so it was still important to keep focus on the navigation, because the guys out front had been opening all day. At one moment they can make a mistake and lose focus. It ended up okay. Me and Pricey pushed all the way to the end. We broke away from the guys in the dunes. I was surprised that the big kangaroo could still follow me! It was good, because we were two Aussies pushing through at the end and to pull away from some fast guys is pretty good. I hope my strategy yesterday was a good one. I waited a long time and slowed down a lot after the last refueling. Jordi was telling us that today was going to be a tough stage. He said don’t win unless you can win by a lot. That’s what I was doing today. I thought, ok, if I go for the win, I’ll try and push the whole day and win by a lot, and now I’ll focus on tomorrow. Of course, the Aussies have the strongest spirit. We’ve got some good natural desert skills. I think me and Pricey have come from a good background, with a lot of fast racing in Australia and it’s paying off here on the Dakar”.