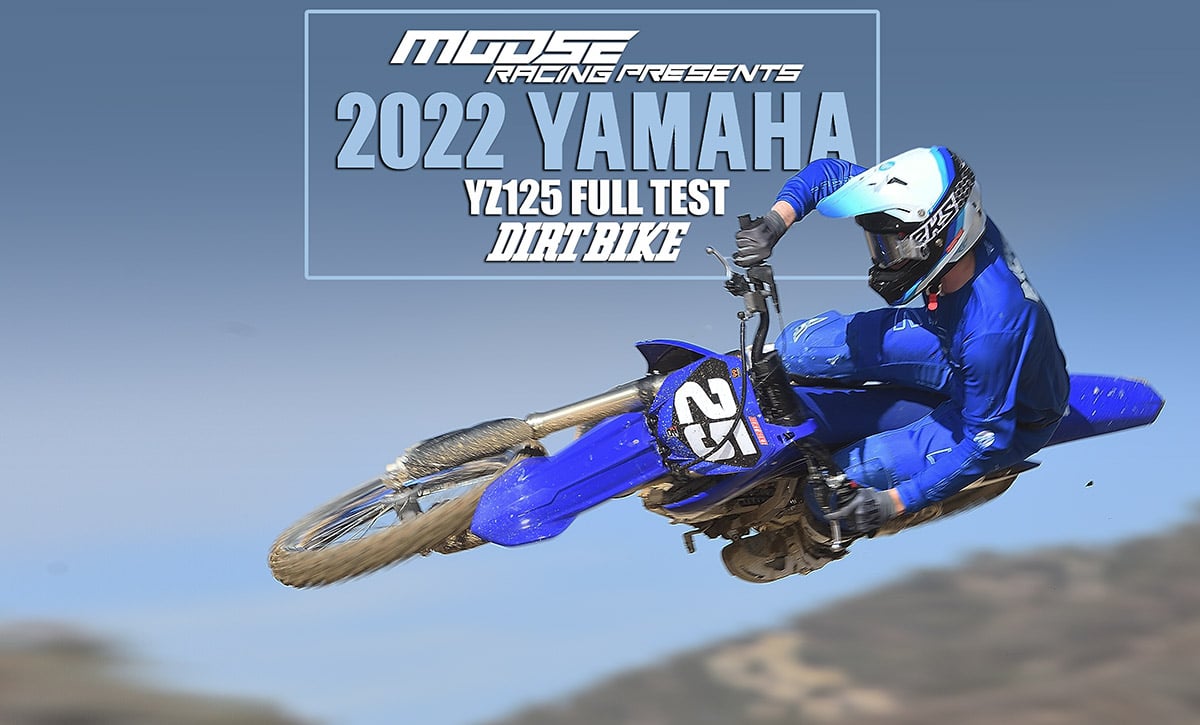 There are two ways to look at the 2022 Yamaha YZ125. Two-stroke fans will be ecstatic that Yamaha is showing new commitment in their world. A major Japanese manufacturer opened its corporate wallet to design a new two-stroke motor and make substantial changes to the bodywork, brakes and suspension. A two-stroke fanatic will say it’s long overdue, cite conspiracies and agendas, and complain that it’s too little too late. We understand both views. The fact remains, however, that riding the 2022 Yamaha YZ 125 is the most fun you can have on two wheels. You can’t possibly dislike the bike, no matter who you are and what you ride.

In 2005, the motocross world was in the closing stages of a revolution. The 125cc two-stroke had won its last National Championship, and yet Yamaha made a big investment in its two-stroke line that year. The YZ125 and YZ250 got completely new chassis and mostly new motors. Yamaha might have had the foresight to know that this redesign would have to last a very long time, but more than likely it was part of the regularly scheduled updates that had been standard procedure in the motocross world for a very long time. Whatever the case, the 2005 YZ125 was freakishly good. It was light, fast and handled better than any motorcycle ever made.

In the technology freeze that followed, the YZ125 held up well, but 17 years is 17 years. The old YZ wasn’t fast enough to hang with European 125 two-strokes, and it definitely wasn’t fast enough to keep up with 250cc four-strokes. Now, we have the first substantial update in years. It isn’t the top-to-bottom rebuild that the faithful might have hoped for, but it’s far more extensive than anything since 2005. Most engine parts are new, including the cylinder, head, piston, piston pin, connecting rod, crankcase and expansion chamber. The top end is tilted about 4 degrees farther forward. It has different porting, and a Moto Tassinari reed cage is now standard. The carb is perhaps the most interesting change. It’s now a Keihin Powerjet. This is what has come on the YZ250 for years. A separate fuel jet is wired into the ignition to provide more fuel in the meat of the powerband—that is, between 5000 and 9500 rpm when the throttle is over half open. It was pretty trippy technology back in 2005, but we suspect the biggest news to most YZ125 fans is that the Mikuni carb is gone. The transmission has been beefed up and the ratios for fifth and sixth are a little taller. The rear sprocket is also one tooth larger. The motor has the same 54 x 54.5mm bore and stroke, and the power valve is driven by a centrifugal ball-ramp mechanism. The parts are new but the concepts are the same.

The bike looks and feels different because it has new bodywork on top of the same aluminum central-backbone frame. The main reason Yamaha did nothing to the frame is probably because they couldn’t figure out what it needed. We have often said the YZ125 is the best-handling motocross bike ever, and no one contradicts us. It was, however, feeling a little dated. Riders coming up from minis wouldn’t know the difference, but if you rode the YZ125 after riding a current YZ250F, it would feel like you just went back in time. The seat put you in a pocket, and it was difficult to move around. Now, the bike is flatter across the top. That also means it’s taller in the middle. Along with the new bodywork came a new airbox, which is said to allow more air into the motor. In the suspension department, the bike got stiffer springs and new valving but no mechanical changes.

When you ride the new YZ125, it feels like being reunited with an old friend. Yes, the new layout is more modern, and that will definitely be welcome to some, but realistically it doesn’t change the bike’s actual performance. That’s good, because we still think the YZ125 is absolutely phenomenal in the handling department. It makes you feel superhuman. You hold it wide open and somehow everything comes out perfectly. Even when you get out of shape, it isn’t scary and, most of the time, it doesn’t even slow you down. We could say that this is because of the weight; the new YZ125 is 203 pounds without fuel on our scale. But, that’s normal for a 125 two-stroke, and even a couple of pounds heavier than it was last year. In truth, it’s a great-handling package with stable manners and excellent suspension. The KYB SSS fork is still the benchmark in the suspension world. It is, essentially, the same fork as the one on the YZ250F but with smaller axle carriers on the bottom. The springs are rated at 4.2 N/mm this year , while the shock is 48 N/mm. It’s stiffer than it was but still fairly soft. For comparison, the YZ250F specs out at 4.7 in front and 56 in the rear. If you are in the 150-pound range, the YZ125 will be about perfect. Bigger riders should want stiffer springs, but we’ve found that isn’t always the case. In general, larger riders who are drawn to 125cc two-strokes are less competition-oriented and appreciate the cushy ride.

HORSEPOWER GIVE AND TAKE

Increasing the horsepower was the main goal and the highest priority for the motor redesign. The Yamaha could have gone on forever if not for the fact that the Husqvarna, KTM, GasGas, TM and even Beta 125 two-strokes all made more peak power. The new Yamaha does, in fact, have more power than it did. It also spreads that power over a less pointy peak. In other words, it doesn’t just die on top when it’s done. It actually will scream past peak a little if you can’t get to the shifter in time. That makes the bike a little better in deep sand and loose dirt. Overall, though, it isn’t that much faster than the previous version. It gained just enough to be noticeable but didn’t bridge the gap to the European 125s. And, that increase in peak power extracted a small price down low. One of the most user-friendly aspects of the last YZ125 was that it had decent low-end power. If you messed up your shifts, it would eventually climb back into the happy zone without too much work. Now, the YZ is less forgiving. It will still climb out of a rider-induced rpm hole, but it takes longer.

We experimented with the jetting just a little. The standard pilot jet is 75. We went leaner, then returned to stock and opened the air screw to three turns out. That made it run a little cleaner but had no real effect on the power output. You can also turn to gearing to alter the way the bike responds; on the hilly tracks out west, you definitely could gear lower. But, this is more about tailoring the bike to specific tracks than finding a universal improvement.

So, is the new YZ better than the old one? Certainly! It has a more modern layout, is faster and, more than anything else, it’s new. If you’re a YZ125 lover, then this is all the justification you need to get a fresh one. The price is $6899, which is only $300 more than last year’s. It’s still the best-handling bike there is and the friendliest path to a full-size bike for a transitioning mini racer. Do you have to get a new YZ125? No. If the new YZ125 has taken the title of “Most Fun Dirt Bike Ever,” then, in truth, the previous one is still solidly in second place.