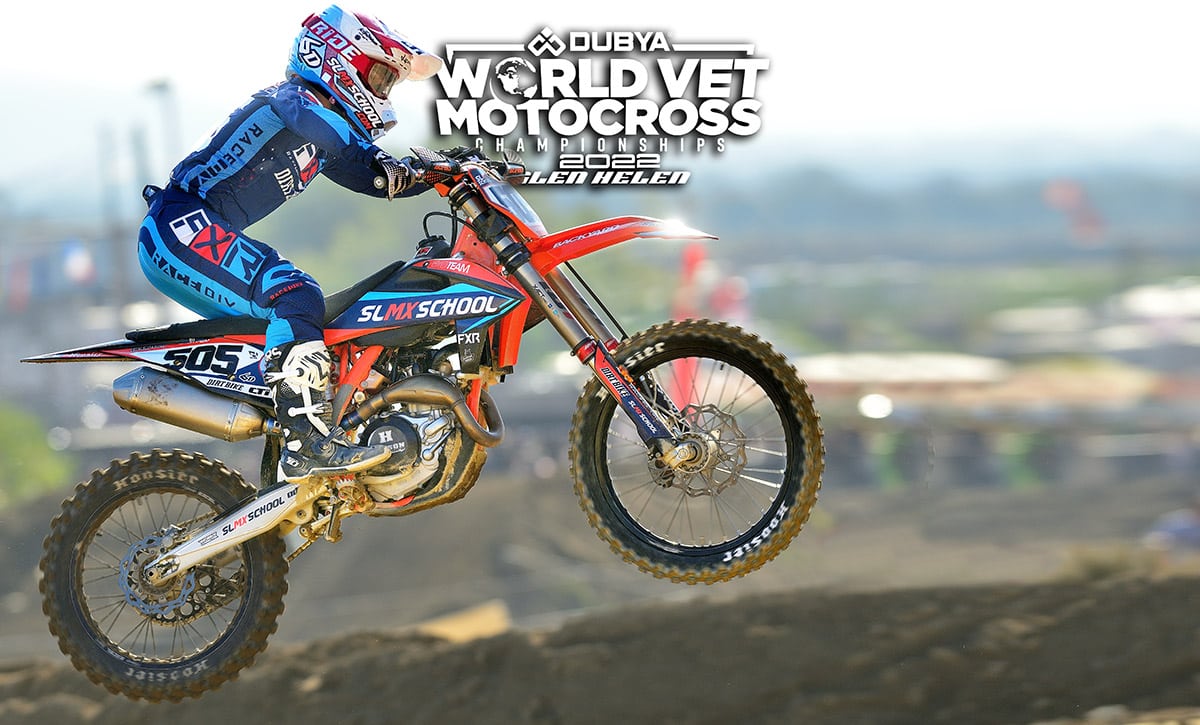 The Dubya World Vet Motocross Championship took place this weekend at Glen Helen Raceway with a  turnout of riders from 20 different countries. The format in all the sportsmen classes called for three motos over two days of racing, while the Pro classes did only two motos. The main event was Sunday’s 30+ Pro class which saw a Glen Helen regular on top Sean Lipanovich is, among other things, a motocross trainer and instructor who spends at least two days a week working with clients at Glen Helen, and then races there every weekend.  He’s also a very fast pro and he proved it by scoring 1-2 against an impressive field of talent. In the first moto he pulled a holeshot and disappeared while the rest of the field fought over second place. Eventually, it panned out with Ryan Morais getting second in that moto. The second moto started off the same way, but this time Sean Collier hunted down Lipanovich to take the moto win. He ended up second with a 3-1 score behind Lipanovich. Other notable riders in the 30+ Pro were Ben Lamay in fourth, Mike Brown in sixth and Kris Keefer in 15th.

Brown came back to win the 40+Pro class easily over Keefer and none other than Jeremy McGrath, with Michael Staufer and Mark Tilley in third and fourth. McGrath was honored on Saturday night with the presentation of the Edison Dye Lifetime Achievement award. You can watch a video, which was produced by Glen Helen Raceway and Tavis Fant on McGrath’s career by clicking here. McGrath also raced the Pasha 50+ 125 Pro class on a 15-year old KX125. He finished second to Doug Dubach after Mike Brown dropped out of moto two.

The purse in the Pasha 125 classes was posted by Pasha Afshar, the star of “Bennett’s War.” He does it several times a year simply because he loves 125cc two-strokes. There were two classes–30+ and 50+. Mike Brown won the 30+ and the first moto of the 50+. Another special event held at the Dubya World Vet Championship is the World Cup. This is a tradition that can trace its namesake back to 2002 when the Motocross of Nations was canceled and Glen Helen stepped in to hold an alternative for the teams who showed up in the U.S. Australia won that year. Now, the rules have changed to team riders of different age groups together. Guam won this year with Sean Lipanovich, Kris Keefer and Doug Dubach. Canada was second with three real Canadians: Ryan Lockhart, Shane Cuthbertson and Justyn McCabe. For full results, co to www.glenhelen.com