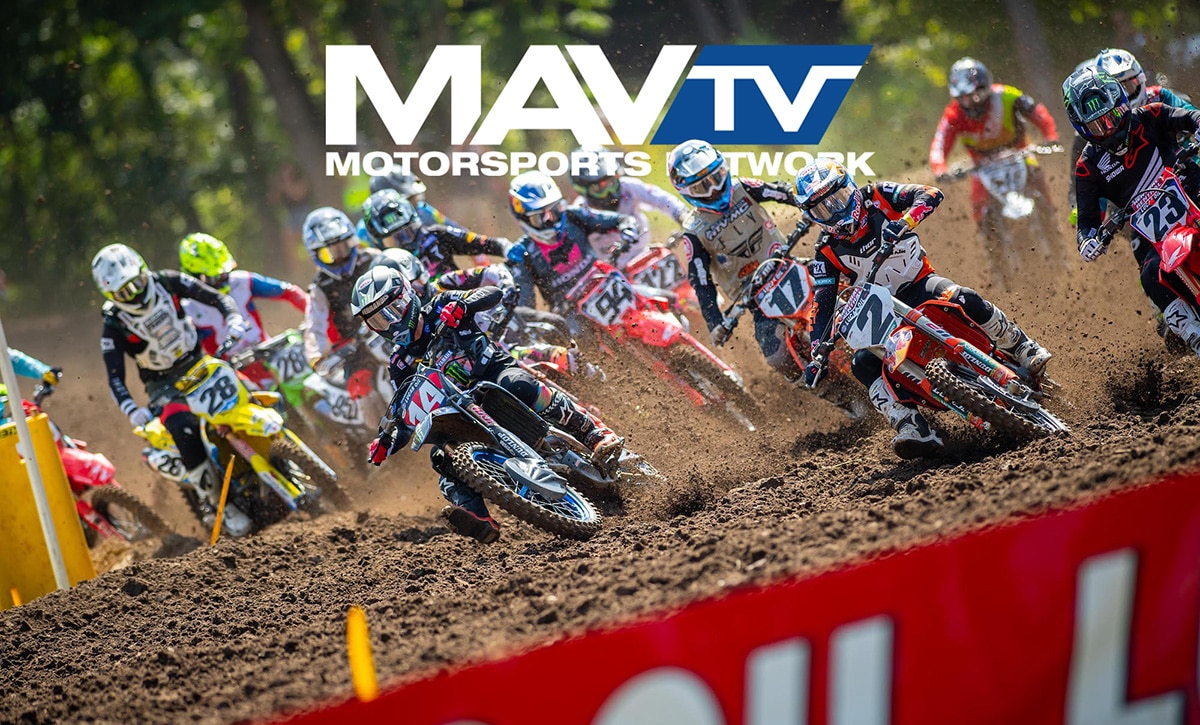 The 2022 Lucas Oil Pro Motocross season will be broadcast on MAVTV this spring and summer. Instead of the first and second motos being shown on different networks, as has been the case for years, each race will be shown in its entirety live on MAV. For those who do not have the network, a subscription app is being offered. The official press release from MX Sports is below.

MX Sports Pro Racing, in conjunction with longtime series title sponsor Lucas Oil, has announced that MAVTV Motorsports Network will become the primary broadcast partner of Lucas Oil Pro Motocross Championship, sanctioned by AMA Pro Racing. As part of the series’ milestone 50th anniversary, the “Home of American Motorsports” will provide the most extensive live broadcast schedule in American motocross history for the 2022 season. The championship will be showcased on MAVTV’s over-the-air network in addition to introducing Pro Motocross to the subscription-based MAVTV Plus global streaming service for the first time, where both monthly and yearly subscribers will have on-the-go access to watch the season unfold from their mobile and streaming devices. New subscribers to MAVTV Plus can take advantage of a limited time offer of $6.99 on a month-to-month plan!

The Lucas Oil Pro Motocross Championship 50th Anniversary season will come to the MAVTV Plus global streaming service this summer.
The 50-year milestone of the world’s most prestigious off-road motorcycle racing series is a testament to the popularity and power of the sport, from grassroots beginnings to a preeminent championship series with global reach, appeal, and massive cultural impact. There is no better representation of the current global influence of Pro Motocross than the pair of international athletes that will carry the number one plate as defending champions in 2022 – France’s Dylan Ferrandis, the 450 Class titleholder who rides for Monster Energy Star Yamaha Racing, and Australia’s Jett Lawrence, Team Honda HRC’s teenage phenom who currently holds the 250 Class crown.

“The opportunity to enhance our partnership with Lucas Oil and unify our broadcast efforts with Lucas Oil Production Studios was something that will serve the best interest of our sport, our athletes, teams, sponsors, and most importantly, our fans,” said Tim Cotter, Event Director, MX Sports Pro Racing. “MAVTV Motorsports Network has provided the foundation for live coverage of the Pro Motocross Championship for many years, showcasing the first motos of every National in their entirety. Now, with MAVTV as the series broadcast partner, we have an unprecedented opportunity to provide comprehensive live coverage of all 24 motos of both the 450 Class and 250 Class during our landmark 50th anniversary season.

“Beyond that, we can also provide an exclusive global streaming platform in MAVTV Plus that provides on-demand access for not only our domestic fans, but also a very significant portion of our international audience, including the native countries of our respective defending champions in France and Australia. We are incredibly eager and excited for the season ahead with Lucas Oil and MAVTV.”

This summer Frenchman Dylan Ferrandis (14) will look to do something no international rider has done before and successfully defend his 450 Class title.
Photo: Align Media
The Lucas Oil Pro Motocross Championship was founded in 1972 and has been title sponsored by Lucas Oil dating back to the 2009 season. The longstanding partnership, which will enter its 14th season, expanded to also include Lucas Oil’s broadcast division through MAVTV Motorsports Network, dating back to the 2014 season when it became the exclusive broadcaster of the opening motos for every round on the series schedule.

“Our team at Lucas Oil is incredibly honored to be able to support the motocross industry for the past 13 years,” said Morgan Lucas, President of Lucas Oil. “We’ve seen some of the best-in-class athletes compete in the series, and we’re excited to expand our audience even further on our MAVTV channels.”

“At MAVTV, we are thrilled to be a longtime broadcast partner of Pro Motocross, bringing world-class motocross competitions directly into the homes of fans since 2014,” said Dan Teitscheid, President of MAVTV Motorsports Network. “With the addition of Pro Motocross to our MAVTV Plus streaming service, fans can now enjoy all the race action live and on-demand from anywhere. We couldn’t be more excited to elevate our subscription service and reinforce our partnership with the top off-road motorcycle racing series.”

Australian Jett Lawrence has an opportunity to make history in 2022 as the first international competitor to become a two-time 250 Class Champion.
Photo: Align Media
The 2022 season will both begin and conclude in Southern California, from Pala’s Fox Raceway, over Memorial Day Weekend and Labor Day Weekend, respectively. The 12-round championship will visit 10 states over the course of the summer, where the fastest riders on the planet will battle on the most iconic tracks in all of motocross, like California’s Hangtown Motocross Classic, Pennsylvania’s High Point Raceway, Michigan’s RedBud MX, Washington’s Washougal MX Park, New York’s Unadilla MX, and more.

“With more than a decade-long partnership with Lucas Oil, the current era of Pro Motocross has ascended to unprecedented heights with arguably the most competitive landscape in the rich history of the sport,” said Davey Coombs, President of MX Sports Pro Racing. “Now, with the landmark 50th anniversary upon us, we’re proud to strengthen the connection with Lucas Oil to begin the next chapter of this storied championship with a new broadcast partner that will allow us to build on the sport’s legacy. For the first time, Pro Motocross will feature a comprehensive live broadcast package thanks to MAVTV Motorsports Network, making American motocross more accessible to its passionate fanbase than ever before.”

MAVTV is available throughout the U.S. and in 22+ countries worldwide on a total of 220 providers across cable, satellite, telco, and digital broadcasting platforms, including AT&T U-verse, Charter/Spectrum, DIRECTV, Fios by Verizon, FuboTV, YouTube TV, Mediacom, Hulu, and many more. A full list of providers, shows, and scheduled broadcasts can be found by visiting www.MAVTV.com.

Additionally, MAVTV Plus offers both monthly and yearly subscription options for enthusiasts around the world, where $6.99 a month (limited time offer) or $99.00 for the year will provide live and on-demand access to the Lucas Oil Pro Motocross Championship in addition to 175+ other live racing programming offered by the network. A full rundown of plan options, live events schedule, on-demand programming, and more can be found by visiting www.MAVTVPlus.com.

Now available for download for both Apple and Android devices is the official Pro Motocross App. Fans of American motocross can have access to the world’s most prestigious off-road motorcycle racing series right at their fingertips on their mobile devices. Developed by AMA Pro Racing, the Pro Motocross App provides users with the most important information surrounding the Lucas Oil Pro Motocross Championship, from series news to schedule and ticket information, as well as broadcast schedule details and live timing & scoring. Download it now via the App Store or Google Play.