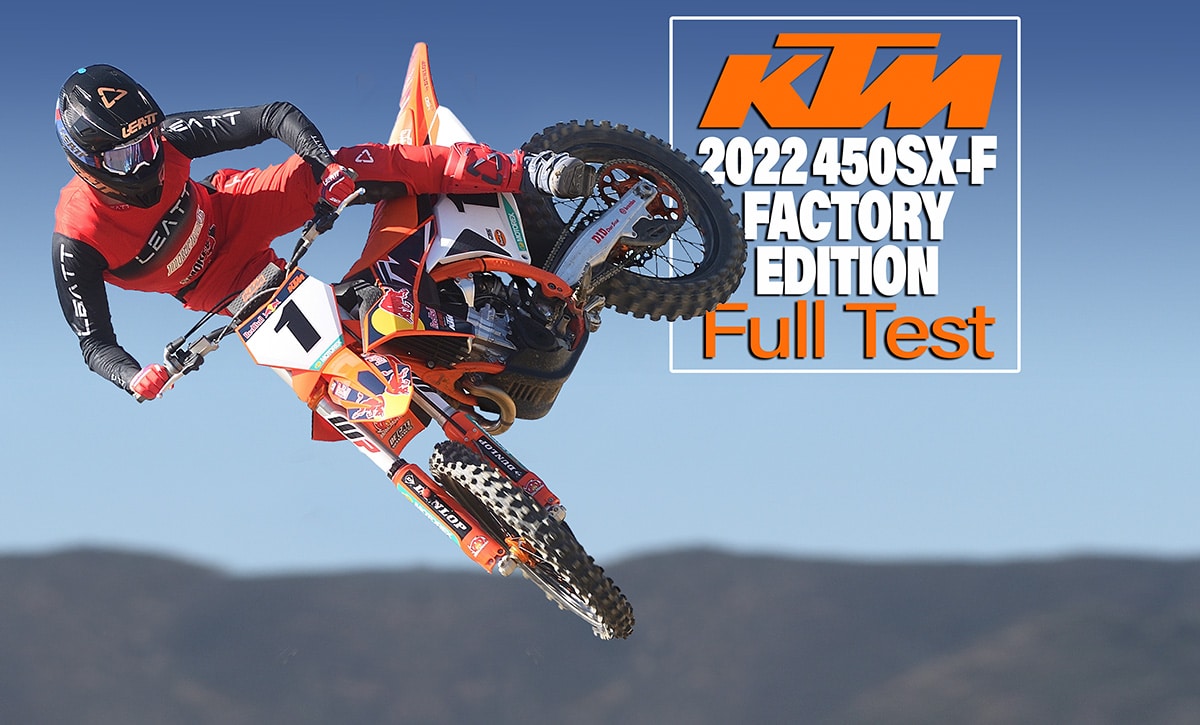 You don’t want to go back to the starting line when you’re winning the race. KTM’s 2022 450SX-F was clearly a great motorcycle. It won the 2021 Monster Energy Supercross title. It outsold most of the Japanese 450s, and it was universally loved by the press. So, why is the Factory Edition so different? It was time. The 450SX-F was due for some big changes, and if you wait too long to do that in the current motocross climate, you can fall behind in the blink of an eye. As we have learned, the Factory Edition isn’t just a special race replica; it’s the first run of a new platform that will be the basis of KTM’s competition models going forward. 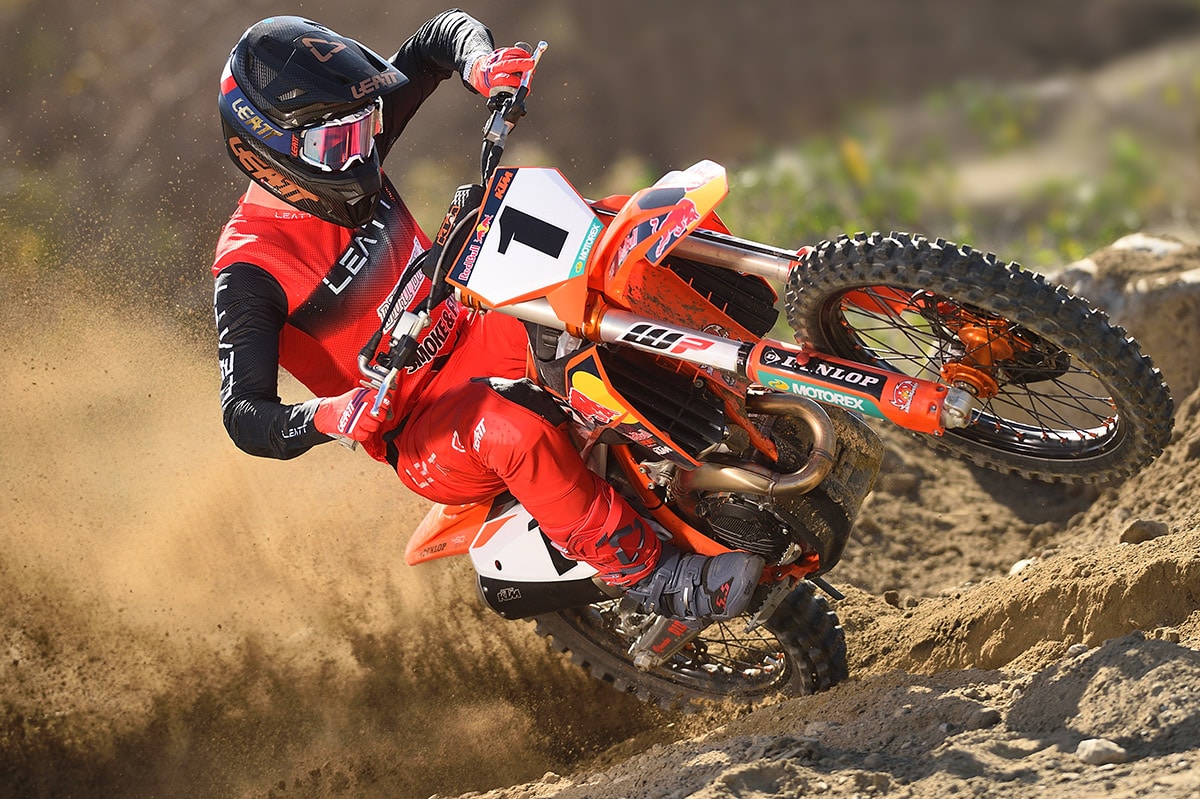 The Factory Edition isn’t a completely blank slate, but it is the most extensive revision of the bike in almost 10 years. The fork and most of the motor’s internal parts are essentially the same, whereas the frame, engine cases, bodywork, rear shock, swingarm and subframe are new. Plus, this is a special edition, so it has the race-team look. It has orange-anodized hubs, a split triple clamp, a disk guard, a skid plate, a holeshot device, a Selle Dalla Valle textured seat cover and Red Bull graphics. In the past, the Factory Edition has also been the recipient of a Hinson clutch cover and an Akrapovic slip-on exhaust, but not this time; KTM already had a big investment in the bike without having to sweeten the deal with those extras.

The new frame is the riskiest business for KTM. When all of Japan went aluminum over 20 years ago, KTM stuck with steel and continued to develop it. The new frame is still steel, but it borrows some of the concepts used on the Japanese frames. The most notable is that the backbone is now a wishbone shape connecting the steering head directly to the swingarm pivot. A tower-like structure now comes up from the swingarm pivot to the top shock mount. KTM engineers say this more or less isolates the flex of the front end from the rear end. The reason that the engine cases are new is because they had to be shortened from front to rear to fit the space allowed; the same frame is used by the 250. The engine was also tilted rearward by 2 degrees, placing the countershaft sprocket 3mm lower. It has changes in cam location and the valve cover to make the engine slightly more compact.

For this model, KTM is introducing a feature that we will probably see more of in the future. QuickShift is an electronic program that interrupts the ignition briefly for upshifts. It doesn’t affect the shift from first to second, but the shifts afterward are designed to be smoother, especially at full throttle. The feature can be disabled with the push of a button on the new handlebar-mounted multi-switch. That switch also has independent buttons for two maps and traction control.

Even though the front suspension is still a WP Xact air fork, it has valving and bottoming system changes. And, the WP rear shock is completely new. It’s 15mm shorter and now has clickers that can be adjusted by hand. The threads for the preload adjuster are now a finer pitch for easier rotation. Other new parts include the footpegs, which are larger, and the airbox, which sucks virtually all of its air through big slots that look like handholds. The new bike is heavier than the standard edition. Our standard 2022 450SX-F test bike is 223 pounds on our scale with an empty fuel tank. The Factory Edition is 231 pounds, also without fuel. Some of that difference can be attributed to the Factory Edition parts—disc guard, skid plate, triple champs and hubs. Half is probably in the new frame. 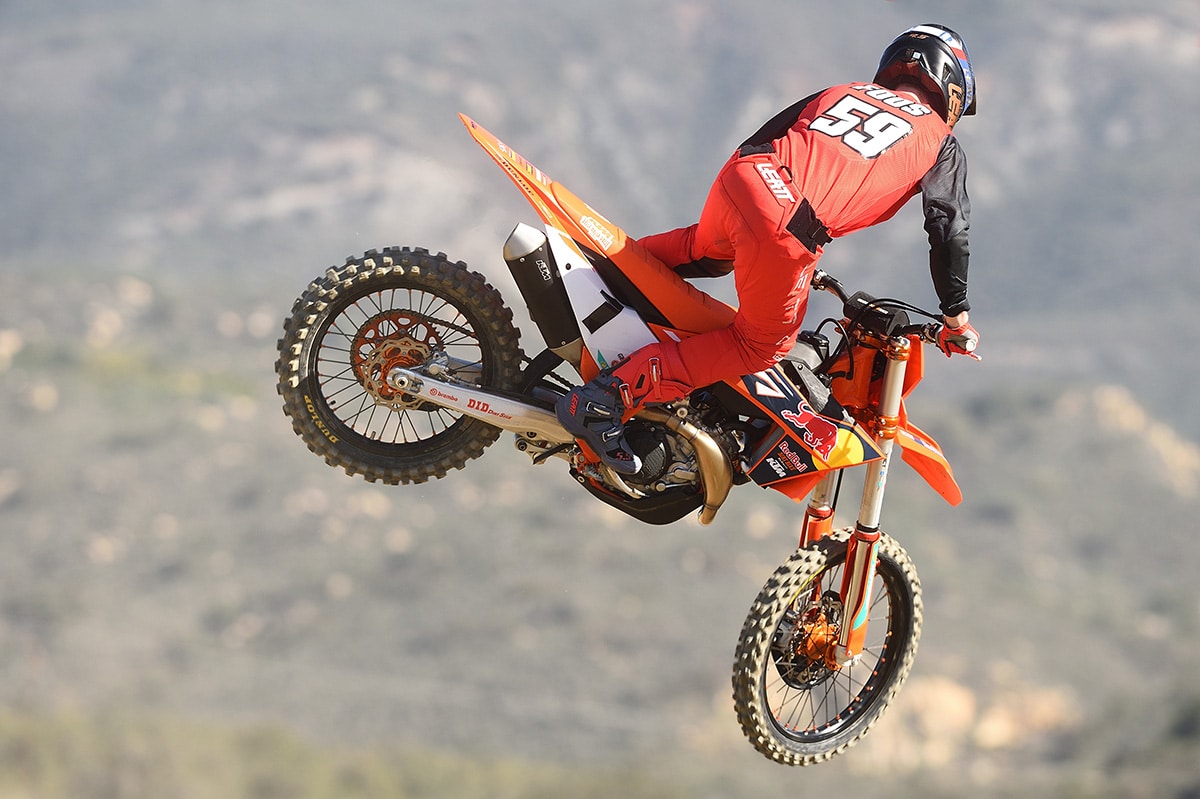 A few weeks into the 2022 Supercross season there was a certain hysteria that developed around the new KTM. Cooper Webb didn’t seem like his old self, prompting speculation that the new Factory Edition was a step backwards. Relax. What Cooper Webb might or might not be dealing with is completely unrelated to what real-world riders will experience. The Factory Edition is most definitely not a step backwards. The improvement, however, is not as dramatic as you might want from such a dramatic redesign.

For starters, the bike has the same overall strengths as the old one. It’s fantastic in the turns and perhaps a little more stable in a straight line. But, that doesn’t mean the bike feels the same. Of all the changes that KTM engineers made, the most dramatic result came from the engine relocation. That little 3mm change in the countershaft sprocket location makes it sit more level throughout the turn, with noticeable anti-squat tendencies on acceleration. That makes the bike feel taller through the turn as well. In some situations, the Factory Edition is noticeably more rigid feeling. If you remember, KTM’s previous frame change came on the 2018 Factory Edition, which was more rigid than the previous one. Basically, steel frames have been getting stiffer, and aluminum frames have been getting flexier every year. In the case of this year’s Factory Edition, it’s only noticeable in certain circumstances, such as higher speeds and big G-outs. What Cooper Webb is experiencing in stadium whoops, we can’t really say. It’s simply not relevant to us.

In normal whoops and rough terrain, the new KTM isn’t that different. The rear end tracks straight and the air fork still feels like an air fork. We have been fond of the WP Xact AER 48 since it was introduced, and we still are. It’s amazingly versatile and virtually trouble-free. It isn’t, however, at the absolute top of the suspension pyramid. We still feel that a well-setup fork with steel springs is hard to beat.

The overall power delivery of the Factory Edition can be characterized with the same descriptors as before: it’s smooth, manageable, and very, very fast. KTM already ruled the roost in this department. No other bike delivers so much power without feeling like it wants to eat you alive. This bike is different, though. The two maps offer a more clear-cut change in personality. The bottom button provides a bigger hit up at the top of the powerband. In general, most riders liked it. If you don’t want the hit, you can just shift sooner, and the two maps are effectively the same. The new button for QuickShift is fun to play with. Some riders were very apprehensive. There were fears that the feature would cause problems when your foot accidentally bumped the shifter. That doesn’t happen, but you do hear an occasional missed beat in the exhaust note, coinciding with an upshift. The benefit is exactly what KTM claims—full-throttle upshifts are smoother on the start straight. Most 450 riders have long since developed the skill to accomplish the same thing without computer assistance, but so far we don’t see any downside. You can always turn it off.

The Factory Edition comes with a big number one on the plates. You have to be pretty self-confident to leave it there, but KTM earned that number and wants to promote it. Fair enough. Whether or not you can live up to that standard is another thing. There’s no question that the Factory Edition can. The previous KTM was an incredibly effective motocross bike, and the new one is incrementally better. That’s all we hoped for.