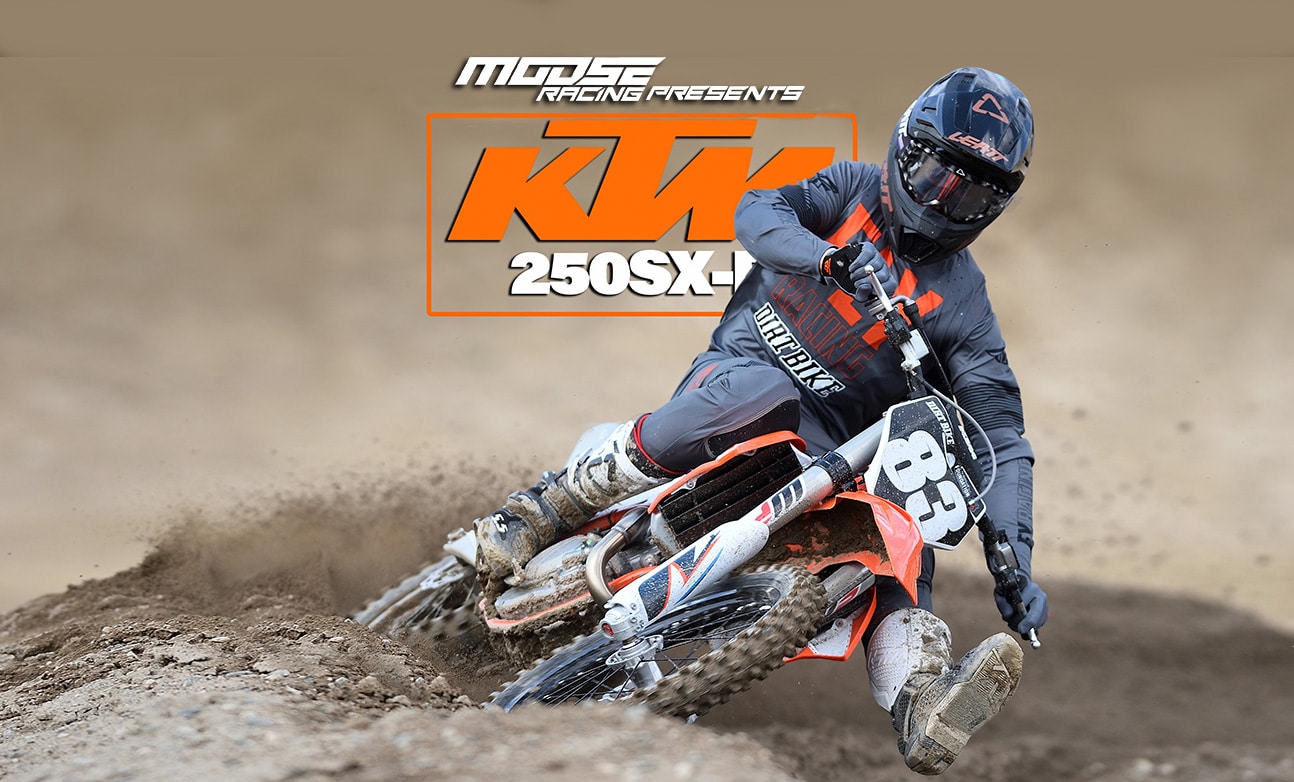 Few bikes have a resume like this. For years now, the KTM 250SX-F has been the lightest bike in the 250 class. It has also been the bike with the best peak power, the best brakes, the best clutch, the best this, the best that, and on and on down the list. For some people, that all adds up to an inevitable conclusion: the KTM 250SX-F is the best bike in the class, if not the best bike in any class. But, not everyone thinks that way. There’s a not-so-small segment of the motocross world that gravitates toward heavier, slower bikes; for example, the Yamaha YZ250F, which won our 2021 250 shootout. Is there a missing piece of the puzzle? 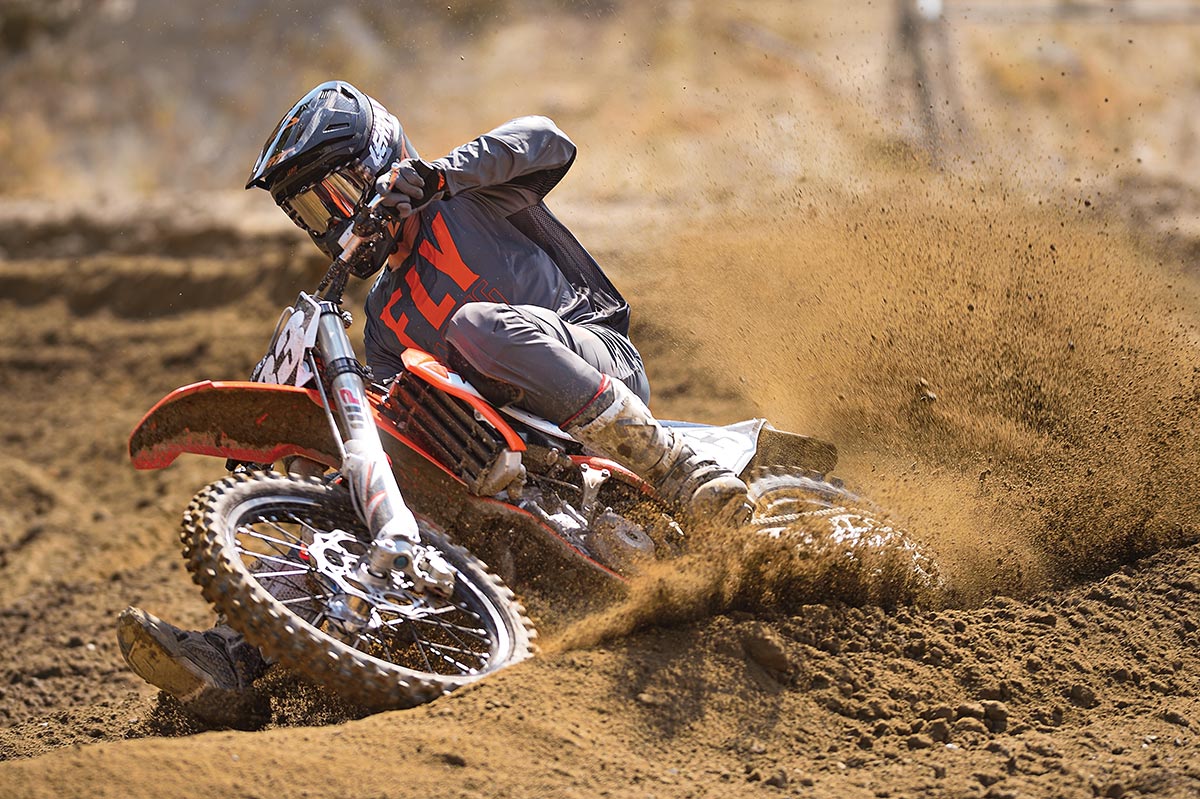 THE COVID FACTOR
COVID-19 continues to have an odd effect on the motorcycle industry and the world. Even though the KTM factory resumed production somewhat early, there was a big shortfall in supply of 2021 models at the same time that there was a freakish increase in demand. The time and resources that the factory usually devotes to development were used to put out fires and deal with unexpected problems. The bottom line is that the 2022 model has very few changes. The graphics and the orange frame are new, but little else is. There were some internal parts suppliers who could not supply, prompting KTM buyers to do some shopping. It’s not clear exactly which parts are different, but they aren’t likely to affect performance. It turns out that KTM didn’t plan to make major changes anyway. There has been extensive testing of a new chassis and a mostly new motor, but in KTM’s long-term plan, 2022 models were scheduled to use the existing platform. The hint is the frame color. There’s a history of the orange frame color being reserved for Factory Editions and the last model before a major change. The 2021 250SX-F did not have an orange frame.

There’s also been a change in KTM’s presentation of the My KTM Bluetooth app. This was to be KTM’s answer to the Yamaha Power Tuner app, which lets the owner change EFI settings in the field via a smartphone. In KTM’s case, the connectivity unit was sold separately, but only a handful actually made it to dealers. The 2021 KTM 450SX-F Factory Edition came with the unit, but it fell short of expectations. We understand that these units will be made available eventually, and there have been hints of more extensive capabilities, but no official announcement has been made.

So now a very cool-looking 2022 KTM 250SX-F is here, and despite being mechanically unchanged, it’s still a very impressive motorcycle with a number of technical features that have pointed the way for the entire dirt bike industry. The motor has double overhead cams that use finger-followers between the cams and the valves to eliminate the reciprocating mass of buckets. The clutch uses a Belleville spring rather than five or six coil springs and, of course, hydraulic actuation through the Brembo master cylinder and slave cylinder. The gearbox is a five-speed; although it’s not unheard of for riders to use the six-speed from the KTM 250XC-F. Many riders routinely ride the XC-F in motocross, just for the gearbox.

KTM has steadfastly maintained its belief in steel frames for two reasons. First, steel is generally more compliant than aluminum, and second, it turns out that it’s lighter—or at least KTM’s design is lighter than any of the aluminum versions used by Japanese manufacturers. The bike weighs 218 pounds without fuel, which compares to 227 for the 2021 Yamaha YZ250F. The GasGas MC250F and the Husqvarna FC250 are built on the same engine and frame as the KTM, and both weigh 219 pounds. It isn’t just the frame that makes the KTM so light. The front suspension is a WP Xact air fork, which is one of the lightest forks in the business. Obviously, it has no springs, and its split functionality (left side air, right side damping) allows it to be lighter still. There are conversion kits that permit a single spring, and the resulting product is still said to be lighter than a KYB or Showa.

SPINNING LAPS
Up front, we pointed out that most riders in our 2021 250 shootout preferred the Yamaha over the KTM, but you can’t take that too seriously. It was the closest and most hard-fought shootout in recent history. Even though it didn’t win, riders basically loved the KTM. The power is very smooth, and it revs to infinity. Peak power is the bike’s calling card. On the Pro Circuit dyno, it tops out at 44.2 horsepower. For various reasons, the GasGas and the Husky, which use the exact same motor, measure slightly lower. The Kawasaki KX250 is close with 43.9 horsepower; although, it’s only that close for a very narrow stretch on top. The KTM is a dyno buster from top to bottom. On the track, however, it feels a little lazy down low. Most riders think that it lacks bottom-end power regardless of what the dyno says. This is more about the way dynos work. When a bike is tested on the bench, the throttle is wide open from bottom to top. No one actually rides that way. We roll the throttle on rather than whack it open. The KTM motor, as it turns out, likes to be whacked open and doesn’t especially tolerate half-hearted efforts.

There are a few measures riders typically take to improve the KTM’s low-end response. First, there’s gearing. You can increase the rear sprocket by three teeth and have good results. That’s why so many riders like the 250XC-F’s six-speed gearbox. The first three gears aren’t as tall as those of the five-speed. Then, there’s the throttle cam. The reel on the twist grip determines how much throttle cable is being pulled as the grip is rotated. The 250SX-F comes with a black cam, which measures 39.5mm in diameter. This is already bigger than the cam on the 450, but there are aftermarket providers that offer larger options. They’re hard to find, because smaller cams are much more common for riders who want to tame their 450s.

The pro solution, of course, is to be more aggressive. Twist the throttle harder and rev the bike higher. The KTM runs so well on top that there’s no reason to ride around in the low revs. Contrary to what you might think, the powerband is actually quite wide, but it goes from high to higher. When you get to the peak, you’ll know. The SX-F doesn’t suddenly stop like many 250 four-strokes, but it does taper off quickly before it goes into stutter mode.

You won’t find anyone who complains about the way the KTM handles. This goes beyond the fact that it’s so much lighter than other 250s. It turns well and is stable; there’s really nothing more you could ask for. The one glitch is in the suspension department. The Japanese 250s currently have an edge there. The Xact fork, for all its excellent qualities in design and weight, hasn’t really stepped up to the next level the way that KYB and Showa components have. WP’s design, with a single compression air chamber and a self-filling balance chamber, is simple and brilliant, but coil-spring forks like that of the Yamaha consistently get better reviews for comfort and response. The KTM fork isn’t as level through turns and doesn’t offer the same cushy compliance on square edges or on slap landings. That said, the WP fork is excellent on rollers and big impacts. The fact that you can adjust air pressure so easily is a great benefit. It might even be a little too easy; riders often mess around with it when they don’t have to. It can be somewhat of a burden to have to monitor your air pressure on hot days or even to double-check your levels after a short period of storage, but come on; it’s no more difficult than checking your tire pressure. 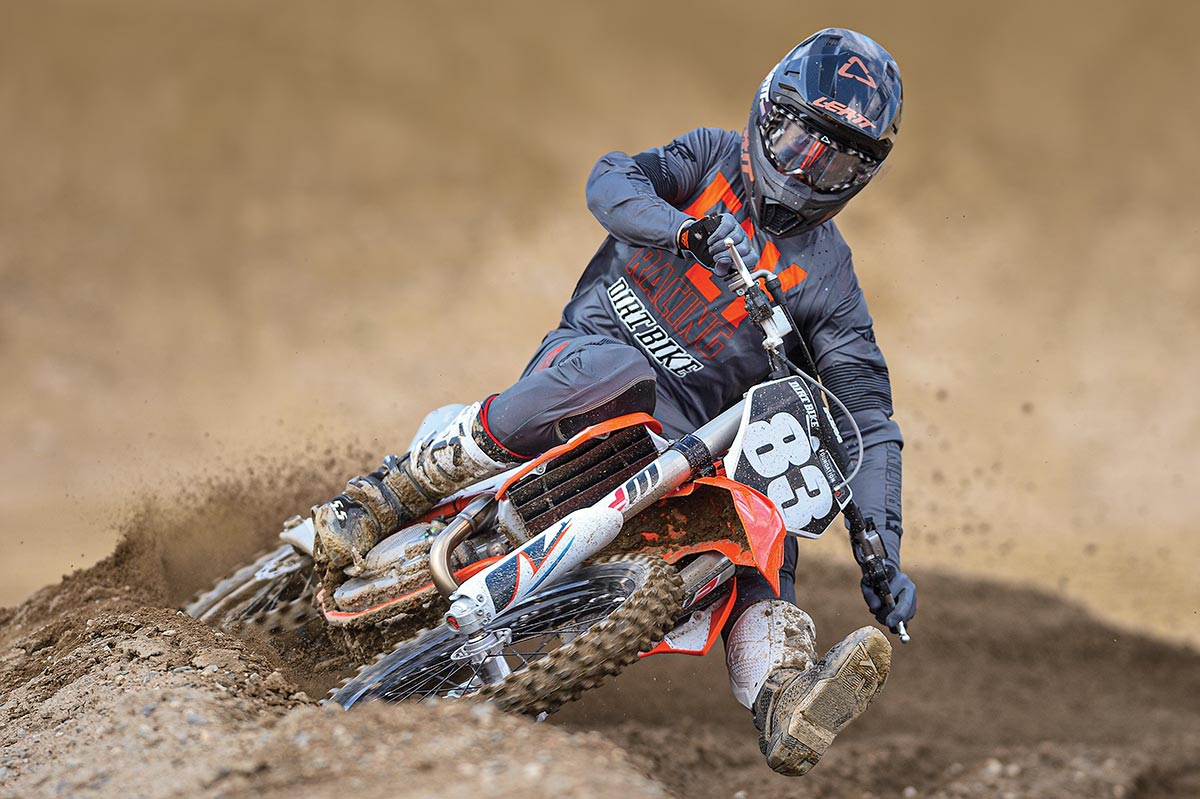 WHERE WILL 2022 LEAD US?
KTM was the first company to ship 2022 models to its dealers. Honda and Yamaha have recently revealed their new offerings in the 250 class. Will either of those bikes be upset by the unchanged KTM? Stranger things have happened. Chances are that the class will remain as competitive as ever, and the KTM will continue to be one of the more pro-oriented bikes. It remains one of the safest bets in all of motocross.