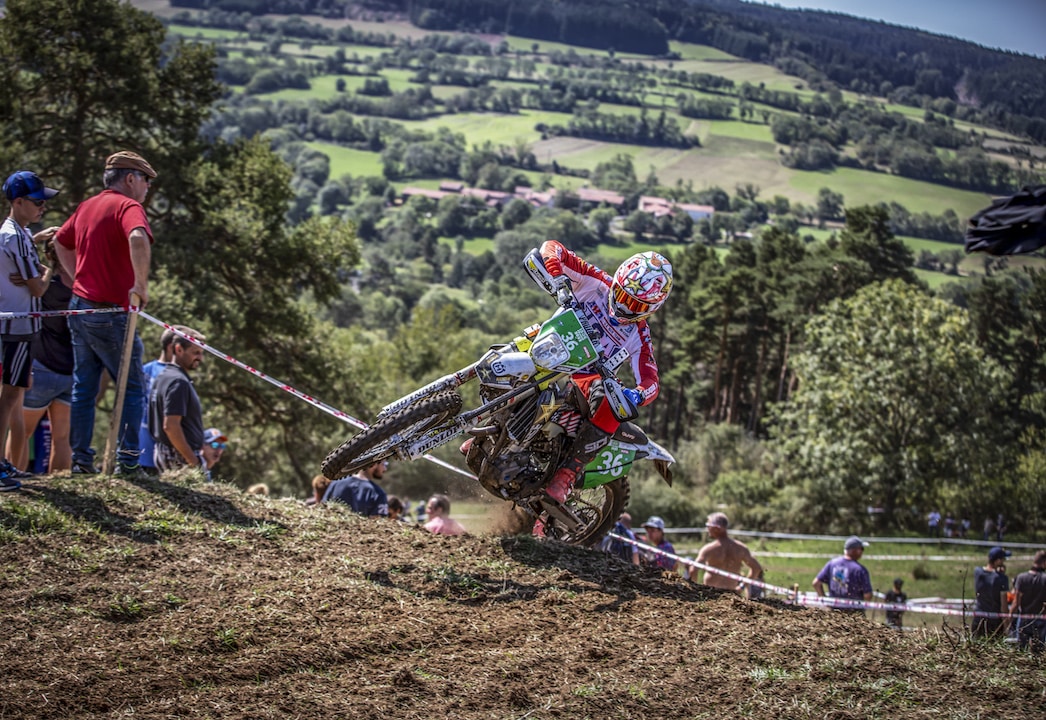 The U.S. World Trophy Teams have successfully completed day one of the 2022 FIM International Six Days Enduro (ISDE) in Le Puy-En-Velay, France. U.S. JR. World Trophy Team rider Cody Barnes suffered a costly mechanical failure with his Honda taking him out of the event and the U.S. JR. team out of the overall standings.

With only 26 seconds separating the top four countries, the U.S. World Trophy Team has positioned themselves right in the mix after day one. As the only foursome to all finish within the 33-minute mark, the Americans delivered a consistent performance to finish a fighting fourth on the opening day. It was FMF KTM Factory Racing’s Dante Oliveira who highlighted the team’s efforts in his World Trophy debut, finishing a slight .15 seconds ahead of veteran teammate, Kailub Russell, after the first five tests. Oliveira slated three top-10 test finishes to position himself ninth overall after day one, with Russell finishing close in tow for 10th. FMF KTM Factory Racing’s Josh Toth had a slow start to the day but he finished strong with a pair of eighths in the last two tests. Toth sits 19th overall after day one, just a few spots behind American teammate Layne Michael (Yamaha), in 13th. 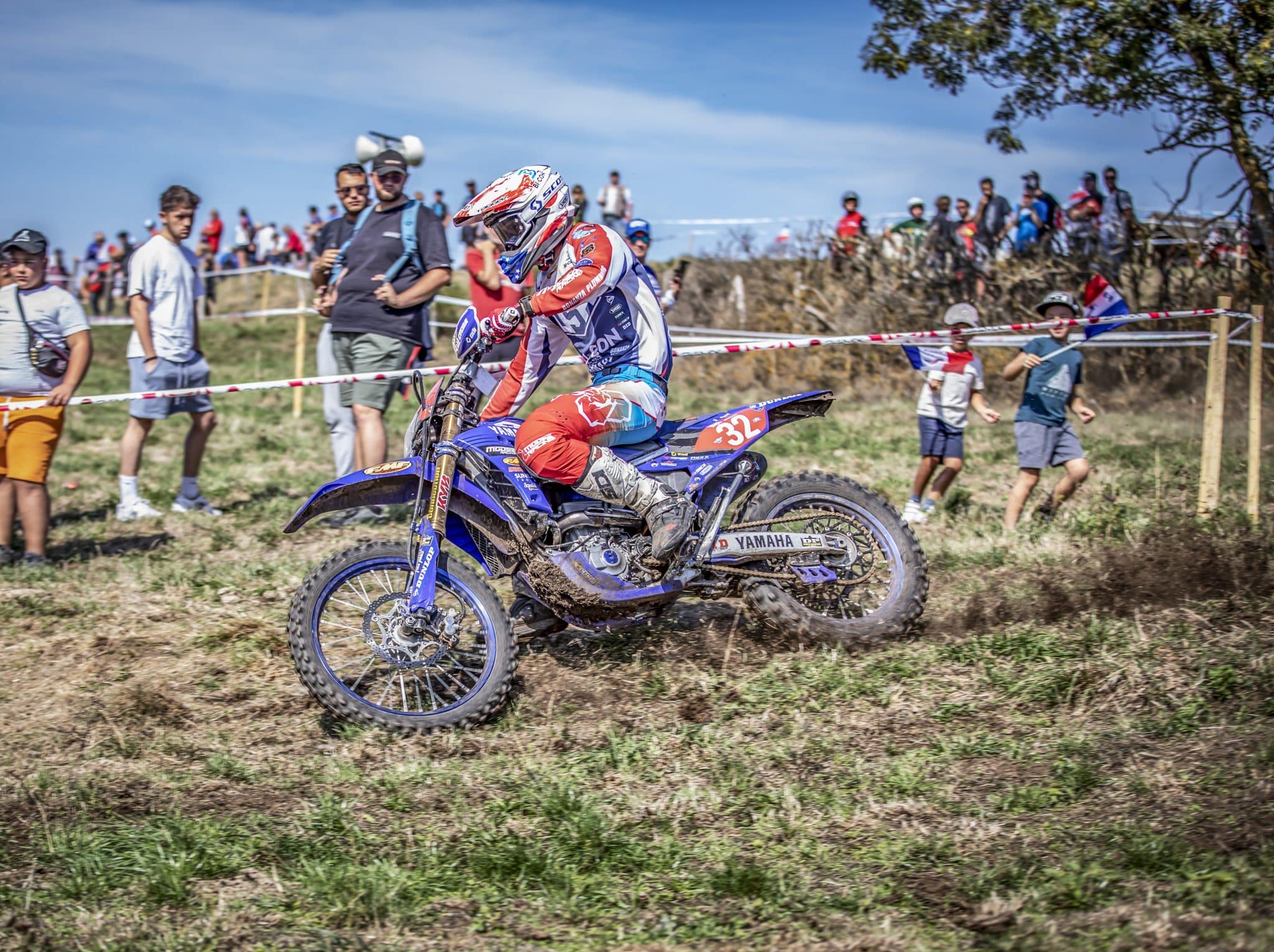 Layne Michael had this to say about his day:

“I wanted to go out and do well but at the same time I didn’t want to overdo it and loose time by crashing. Struggled the first test and was a bit frustrated just felt off but then I rebounded pretty well and rode well the next couple. Honestly I didn’t have a great day; I just felt like I missed a lot of corners and was overshooting stuff, but overall we didn’t loose time by being on the ground and we’re all healthy. Not the day I wanted but we’re (the team) sitting in a good position we’re all really close so I’m looking forward to tomorrow; the tracks will be a bit more rough and have some more lines burnt in.” 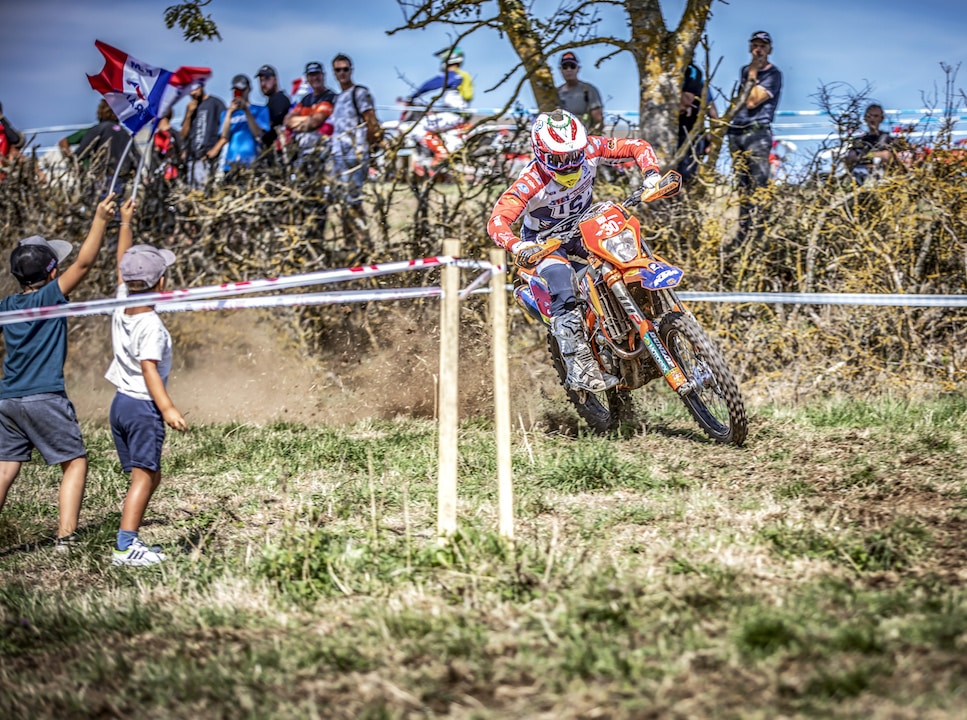 “I’m 100% on the bike. Getting ready for 6 Days I had a pretty good game plan, and then I blew my knee out right in the middle of that so, I’m pretty prepared but not like I feel like I could have been, or should be, but I was really excited because I had a long time to focus on this but then this happened and it was pretty much heart breaking. But yea it is what it is and so I’m trying to get back into that mindset of going fast and just sprinting. I’m pretty happy with the day and just staying on two wheels, I rode pretty conservative and I feel like I have a bit more but I’m just trying to keep it on two wheels and mitigate my chances and risks out there. I’d like to be a bit closer to the top, I think I’m right in that realm there but if I could find 3-4 seconds I’d be super stoked.”

Unfortunately Cody Barnes (35) is out due to mechanical failure. This eliminates USA’s Juniors World Trophy team from the possibility of anything but last place. Austin Walton (36) and Mateo Oliveira (34) will continue to race regardless. Both had excellent days finishing 34th (Oliveira) and 36th (Walton) OA. Cody had only completed one test when the bike’s battery went out on a long transfer. He tried to bump start it while it was still rolling but couldn’t keep it going and had to use his jump pack/box which eventually went out as well, leaving him to hour out on the transfer between test 1 and TC2. 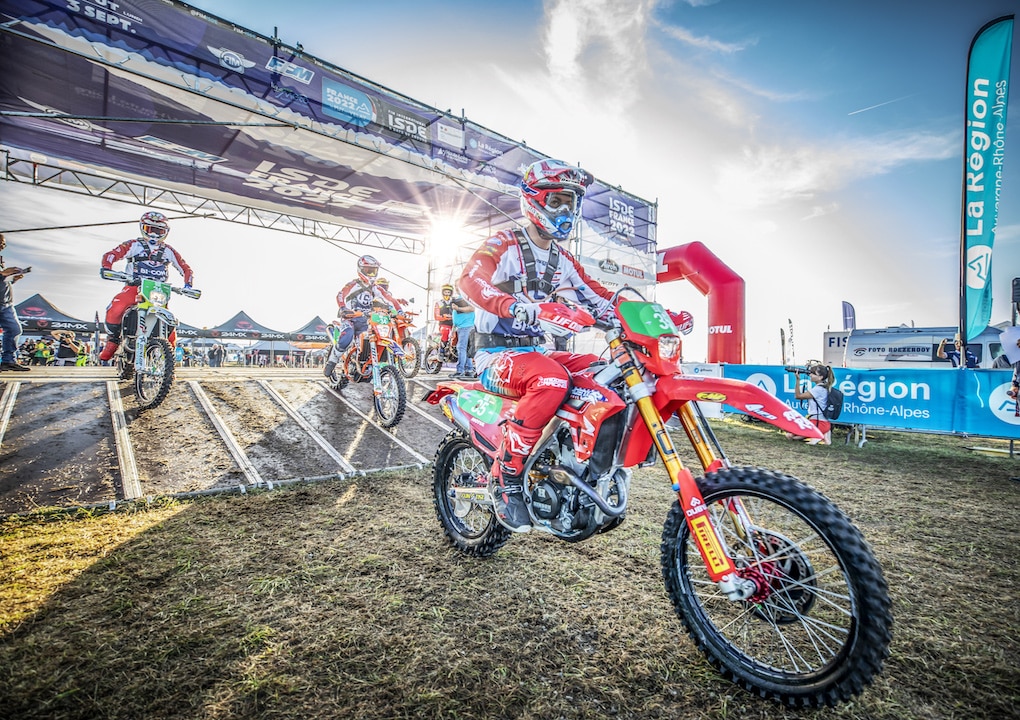 Cody Barnes commented this about his day:

“I had a jump pack with me so that I could jump the bike and it would run for a few miles and then die again. It happened on the transfer that was 15k, so I tried for as long as I could, but then the jumper pack died and I ended up houring out.
It definitely sucks but I’m just honored to even be one of the riders here, so just trying to stay positive; it is what it is.”

AustinWalton:
“The first test was great, I guess I was second out of all the Americans and it sounded like we were sitting first as a team, but unfortunately Cody had an issue and it happens,its racing. The next couple tests I could have done better, just needed to open up my lines a bit and as the day went on I started to do just that and I started to feel a bit more comfortable. So feeling good going into the week and all-in-all happy with the first day.”

The women are sitting in 1(Richards) and 2(Steede), with Gutish currently holding a solid 6th place position. New to this year, the WWT teams will be scored as the other Trophy teams are, with all 3 times included (vs top rider like the Club teams). 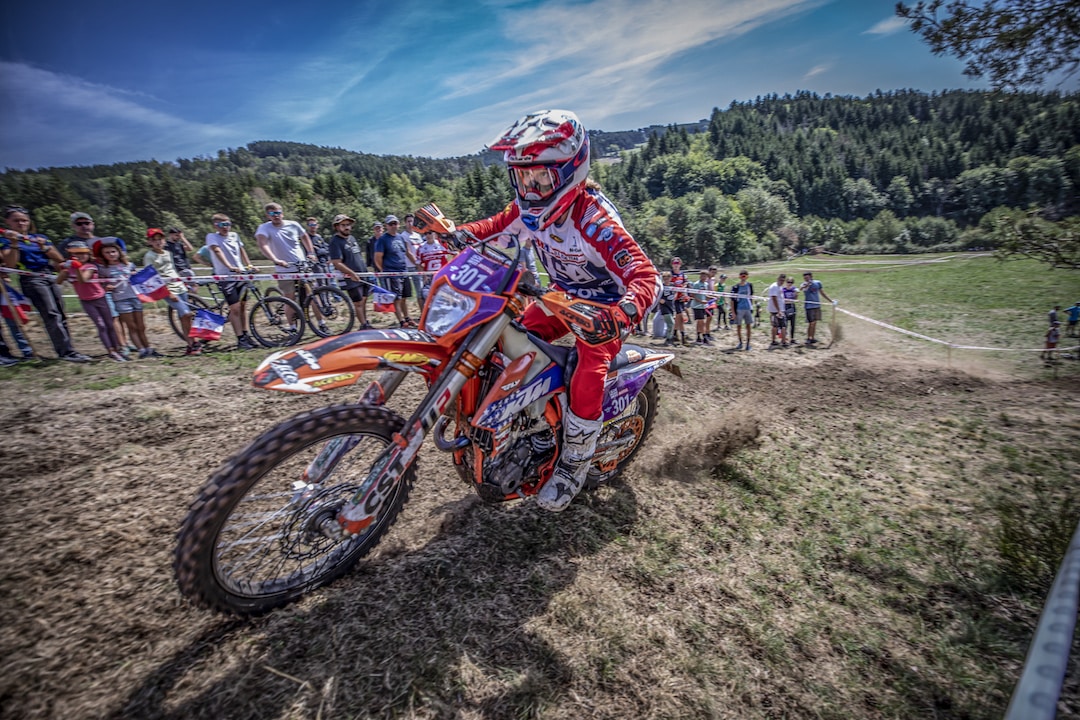 Caught up with Brandy this morning before the race started and asked her if she felt more prepared than last year:
“I would say I’m a little more prepared. I know it’s going to be a bit tougher this year, with a little injury coming in, but I’m excited; I’ve been preparing for this all year so, I am excited!”
“The enduro tests are a lot more technical this year and I’m super excited for that, there’s a couple good fast high speed tests which I can’t wait for, and there’s a lot of good jumps in the tests so I am SO stoked for that, that’ll be fun.” 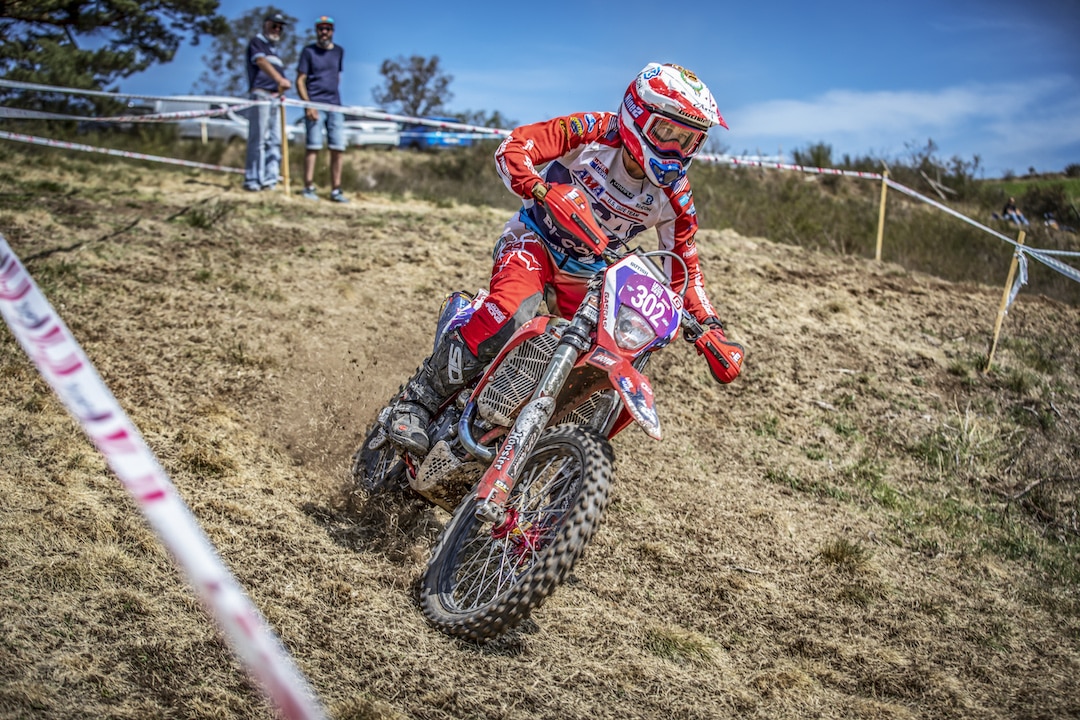 Asked Korie how she felt after her first day :
“All last week after walking I was keeping myself pretty cool, collected, feeling good.. and then we took off this morning and everything hit me at once. Um Six Days for my first time, this is my first day I was just kind of trying to calm myself back down and just ride behind Brandy and she helped me a lot juts staying calm. Finally towards the end of the day I started to feel much better and find a little bit of a flow.”
ISDE
Share FacebookTwitterGoogle+ReddItWhatsAppPinterestEmail