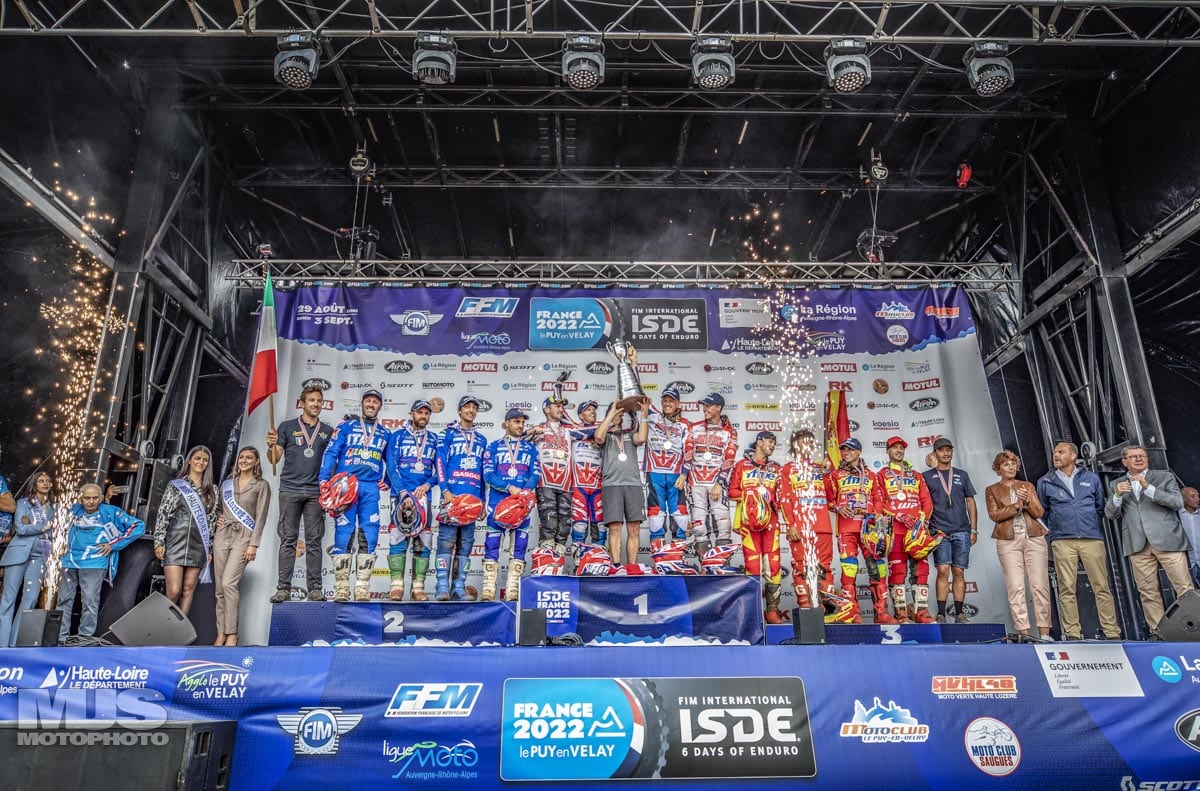 Story and photos by Mary Rinell

It was an excellent Day Six for several Americans in the 2022 ISDE! American team members Austin Walton (Junior World) and Korie Steede (Women’s Trophy) won their respective races, with teammates Mateo Oliveira and Rachel Gutish each following behind them in third. Both Austin and Korie jumped in front from the first corner and never let up nor did they make even the slightest mistake leading them both to a clean victory.

Both of those teams lost a member which took them out of the running in their classes, but the World Trophy team finished a respectable fifth despite adversity. Kailub Russell and Dante Oliveira were, in fact, on another winning team. Spain’s Josep Garcia and the two Americans were on the Red Bull Manufacturer’s team, which finished in front of that competition.  It didn’t hurt that Garcia was the top individual.
A very pleased group of Italians returned home with the Junior World trophy a second year in a row. Following them was Finland in second and Spain.

The Woman’s Trophy  competition saw Great Britain on top for the first-time. Behind them in second was home-based France and Australia, back from having taken the 2021 year off due to Covid restrictions. The Six-days would end with a very happy Great Britain victory in both the Trophy and Women’s classes. It has been nearly 70 years since they won the ISDE (1953), so to win in two classes is a huge accomplishment.

Italy and Spain fought hard for the second place, which all came down to the final moto. The crowd watched team leaders Josep Garcia and Andrea Verona of Italy battle all nine laps, going back and forth until Verona would finally claim victory and lift the Italians to that second place podium position.

In the club class, America was pleased to see team XC Gear finish with a second-place position. The team consisted of racers Craig Delong (P4), Kai Aiello (P10), and Tyler Vore (P15) who all rode solid motos helping to secure their final overall team finish. Ahead of them was the Czech Republic KBS Team, with the French Enduro Dream Team filling the final podium position.

This isn’t Tyler’s first Six-days, but it is his first podium finish due to bad luck his previous three years. “For me this was a redemption year, I was battling with a former world champion (Antoine Meo) and ISDE overall winner so I was over-the-moon with that. I’ve looked up to him my entire life growing up, so getting to start next to these guys … it was just incredible. It was so much fun this week, all the tests were incredible.. the best six days I’ve ever ridden. Hands down, it was just so technical and a lot of variety out there.”

New to this year’s day 6, the racers classification (C1, C2, C3) did not play a role in their start position, mixing the classes and making for a much more challenging race start to finish.