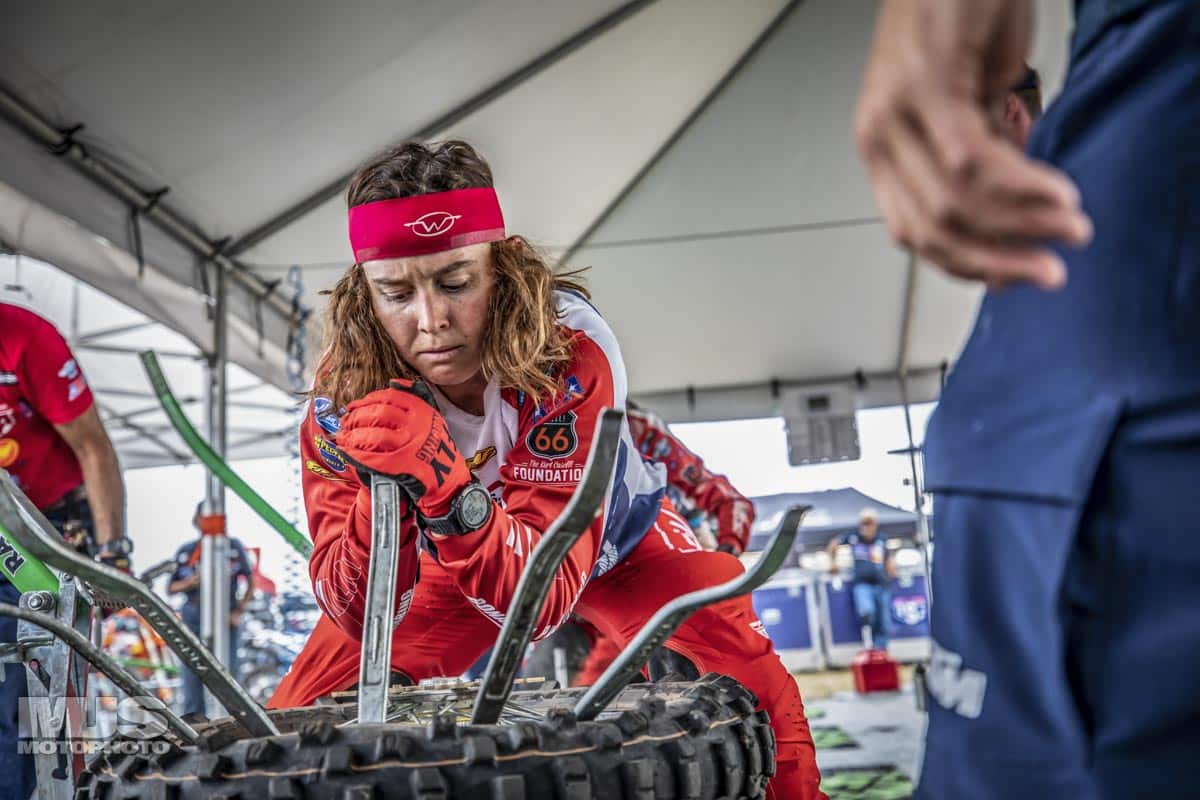 The early results  from Day Four of the 96th ISDE in Le Puy En Velay, France are in with some devastating news for Team USA. Brandy Richards, who had been having an excellent ride and leading the Women’s classification, failed to finish the day after a bad fall. That takes the American women down to seventh in that classification. The leader in the Women’s Trophy is now the UK’s Jane Daniels with U.S. rider Korie Steede in second.

Brandy Richards  continued to race both tests two and three before the team recognized her inability to speak proficiently, and made the very tough decision to pull her from the race. After WWT chase rider Meg Argubright led her to TC3 she was inspected by the team doctor, and then taken to the local hospital where she will stay under close observation for the remainder of the night. After checking in with Brandy, she told us the diagnosis is a severe concussion and spleen laceration. Unfortunately this removes the USA WWT team from the picture.

Korie Steede: “My head all day wasn’t really here, I was just really worried about Brandy ‘cus I could tell she wasn’t feeling too hot. I tried to keep my head on but I was really just worried about my teammate all day. It’s a bummer that we lost her and we’re out of the fight now, but the biggest concern is just making sure she is ok.”

The WT team suffered yet another loss when Dante Oliveira had mechanical issues causing him a four minute penalty. The assumption is that the bike is not running correctly due to tight valves, but Dante admitted he wasn’t entirely certain why the issue was happening. Fortunately for everyone the vehicle is still running, just bogging out during both the tests and the transfers. He will continue to race regardless, but the frustration is certainly at an all-time high.

Dante Oliveira: “The bike is just shutting off … this morning I had to take the valve cover off, which is where I lost four minutes. Weird thing … it got super hot yesterday and is just acting like it’s blowing up. We took the stator cover off thinking it was some oil jet but turns out it wasn’t that. I don’t know but the bike should be good, it should keep running, but yea pretty weird stuff.”

Team GB remains on top of the WT class, as Spain slips into second. Following them is Italy and France, with USA holding the 5th place position. The top 3 teams are all within 5 minutes of each other, with USA suspected to potentially loose another position tomorrow to Sweden who is now only 2 min behind if Dante suffers another penalty.

Both Austin and Mateo had improvements on yesterday’s performance, moving them up to 18th (Austin) and 25th (Mateo) in the start order for tomorrow’s new day 5 tests. The club team’s continue to excel as Craig Delong has another great day leading team XC Gear up into a podium third position going into day 5. Behind him is USA Team GTBN, moving up into 8th. Tomorrow is forecasted for rain nearly the entire day. With the new tests and severe thunderstorms literally anything could happen.