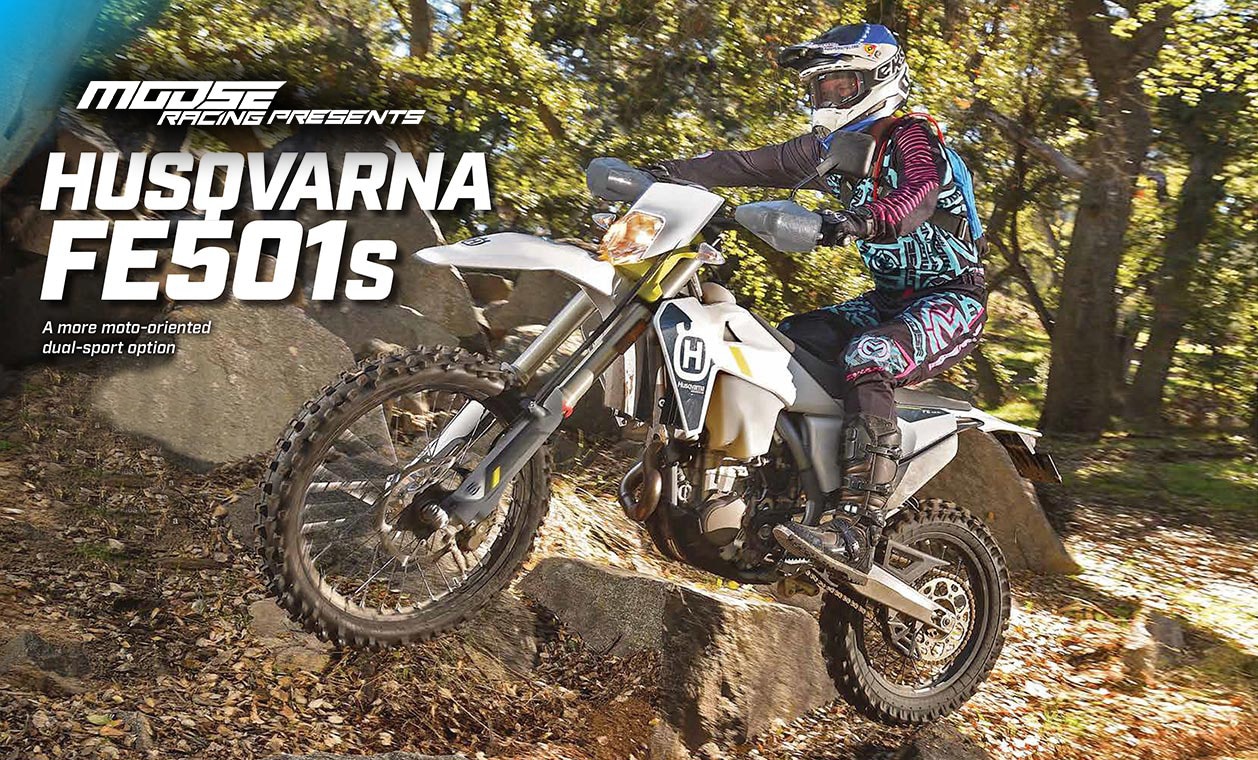 The pecking order in the dual-sport world is well-established, and the Husqvarna FE501s is right at the top. At the risk of rehashing common knowledge, the FE is the Husqvarna version of the KTM 500EXC. Don’t fall into the “white KTM” camp of riders, though. The Husky is its own bike, and there are significant differences worth knowing before you walk into a dealership. 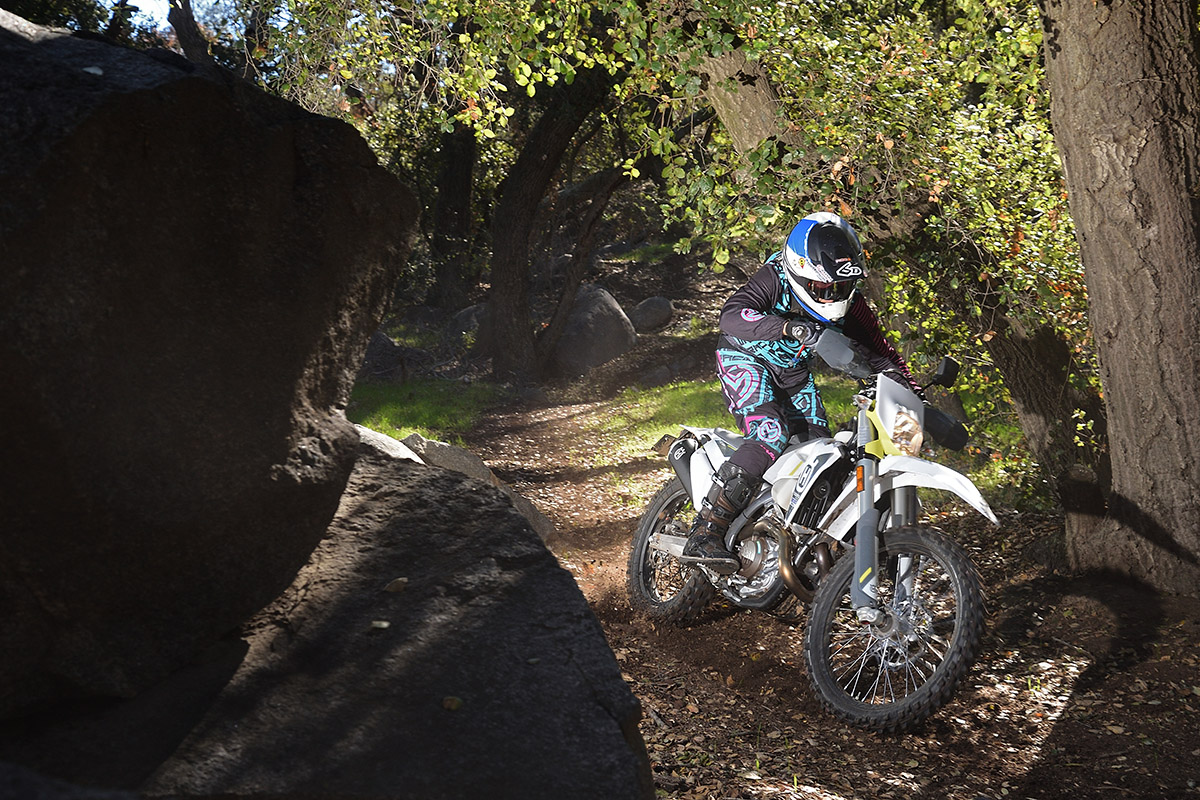 BACKSTORY
Back in 2017 the Husqvarna FE501s went legit as far as noise and emissions. Earlier versions were street-legal but were way too close to the edge for comfort, and Husqvarna was no longer so small that it could fly under the EPA’s radar. The new bike was as clean and quiet as anything from Japan. It did lose a little power in the process, but the new bike was lighter and the mapping was much cleaner. It was a better bike, and most riders forgave it for the underwhelming peak power. One of the most off-beat aspects of the bike was the reed valve between the air filter and the throttle body. It was incorporated to cut down on noise and actually resulted in a slight increase in torque.

The FE got another remake in 2020 with a new frame, a new head and new bodywork. It recaptured a little power and lost the provision for the kick-starter. The kick-starter itself had been gone for a long time, but there had been a kit available. After 2020, that was no longer an option. The KTM 500EXC had a parallel path through all these changes. The most significant difference between the two is the rear suspension. The KTM EXC models have PDS shocks connected directly to the swingarms. The Huskies don’t; they have linkages like motocross bikes. Most of the other differences aren’t very important; the bodywork, airbox, bars and rims are all different. For 2022, the brakes and hydraulics on the Husky are Braktec. They were Magura last year, but in the COVID era of poor supply lines, Braktec was better able to come up with the goods.

BUY AND RIDE, SORT OF
Before you can realistically take the Husky off-road, you have to do the three Rs: re-gear, replace and relocate. “Re-gearing” is straightforward enough. The stock gearing is too tall in the dirt and too low for the street. We find that going to a 51-tooth rear sprocket is enough for virtually any trail, and you still can hit brief sections of road without revving so high that your head explodes. If you plan on doing a Backcountry Discovery Route or something that requires covering lots of distance, never mind. You might even gear taller for a more relaxing engine drone.

“Replace” is about the tires. You need knobbies to go off-road. The stock Conti TKCs are there to pass the DOT ride-by sound test, not for traction. There are plenty of DOT-legal knobbies out there, but we have never had an incident where any kind of law-enforcement agent actually checked the legality of our tires. You should know, however, that you can’t hit turns like a road racer with dirt tires. When you install knobs, you will also need to install rim locks, and you really should balance the wheels.

The “relocate” part of the puzzle refers to the license plate bracket and taillight. The stock Husky has a Christmas tree hanging upside down off the rear fender. It is supposed to hold the plate, blinkers, reflectors and lights. It will eventually get sucked into the rear tire, and you will lose all that stuff. Before even riding our FE, we took all that off and relocated the plate and taillight to the small inner fender. It’s not a DOT-approved practice, but neither is riding around with a bunch of bare wires where your taillight used to be. The stock Husqvarna plastic is a jigsaw puzzle, and the job will take you much longer than you think.

NOW RIDE
After you do those three things, the Husky is a delightful off-road machine. It runs amazingly well for a bike that’s so quiet. It doesn’t flame out. It rarely stalls, and the power is decent. Most riders don’t need to take another step forward into the aftermarket world, and if you don’t know what you are doing, you will just make the bike run poorly with more noise; however, we know from history that most riders at least think about drilling for power. If you choose to go down that road, the first thing you will need is either a GET RX1 ECU or a Vortex 10. They allow you to alter the EFI mapping and, of course, make the bike an EPA outlaw. There are a number of outfits, such as Slavens Racing and Taco Moto, that have proprietary maps for different modifications. Riders generally go to a less restrictive (louder) muffler, and in many cases they take out the reed valve. One advantage that the Husky offers over the KTM is that you can easily replace the air boot with the less restrictive one off the motocross bike. In the case of the KTM, it won’t fit.

We didn’t do anything to alter the power of our test bike. First and foremost, we wanted to keep it quiet. And for the tight trails we like, the power is fine. The stock motor produces around 40 horsepower. There are virtually no mapping problems. It will occasionally stall, but no more so than any big four-stroke. To be honest, a higher priority would be suspension modifications. The Husky is very soft, and the WP Xplor fork is a little odd. The compression clicker on the left fork cap has very limited usefulness. One of the best and cheapest solutions that we have tried is ESR’s base valve kit, which puts a more conventional base valve in each fork leg. You do away with the left-side compression/right-side rebound configuration and end up with a more common setup with compression clickers on the bottom of each leg. That allows you to up the Husky’s game. The stock suspension is set up for relatively low speed; first and second gear on tight trails. At a faster pace, there’s too much fork dive and chassis movement. Stiffer springs help but make the bike less compliant in tight stuff. The only real answer is modification to give the fork broader effectiveness. The linkage rear suspension is more adaptable. You don’t have to modify it unless you plan on going racing. If you go that route, the linkage design means there are about a zillion suspension shops that know how to make it work.

GOING FORWARD
For 2022, Husqvarna still offers a dirt-only version of the FE501 with a little more power and slightly stiffer suspension. Husqvarna says that model will be discontinued in the near future, so the dual-sport version will have to do double duty for both markets. That’s fine. The bike is capable and has unlimited potential. And, it’s still one of the greatest dual-sport bikes ever made. That won’t change any time soon.