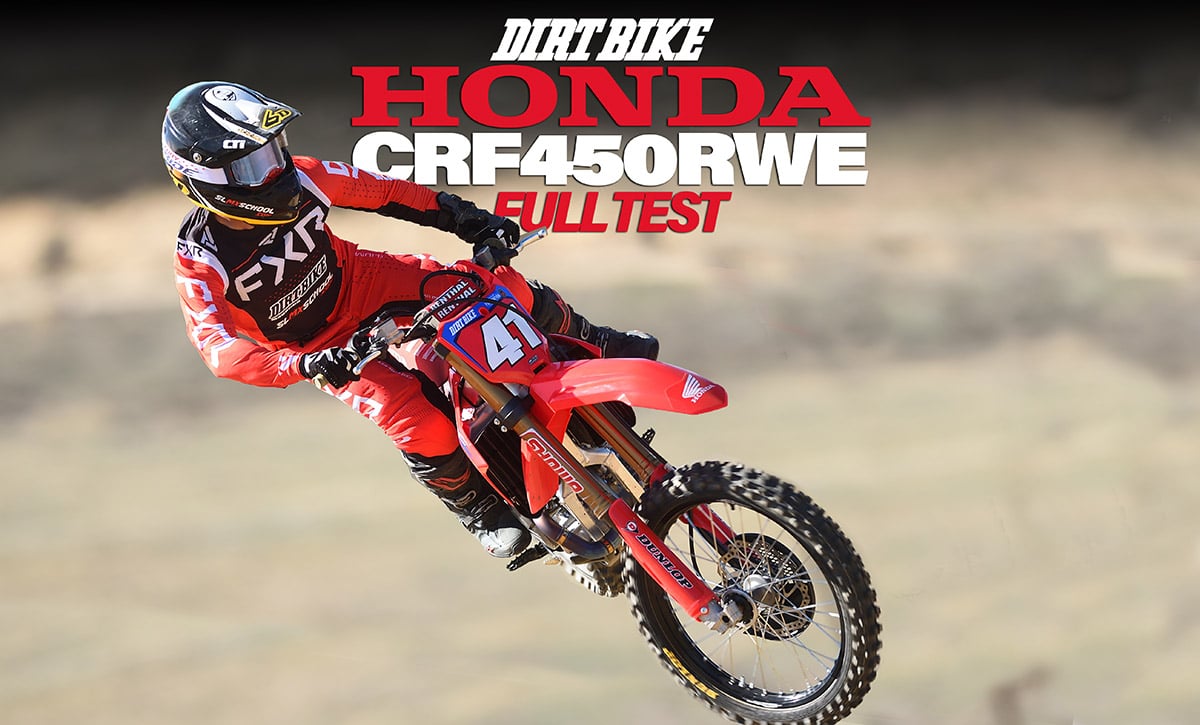 There’s something about a factory Honda that fires up the pulse of any healthy motocross rider. Maybe it’s the color, maybe it’s the way Ken Roczen and Chase Sexton ride, but whatever it is, the Honda tent always has a massive crowd of oglers at any pro race.

The CRF450RWE is a blatant move to capitalize on that. It’s a special edition of the 2022 Honda CR450R that looks almost exactly like the bikes under the tent. And, while race replicas aren’t anything new or unique, the Honda Works Edition goes a step further than most. Instead of just getting team graphics and a little bling here and there, it has a long list of high-end parts, some of which the factory team really does use. 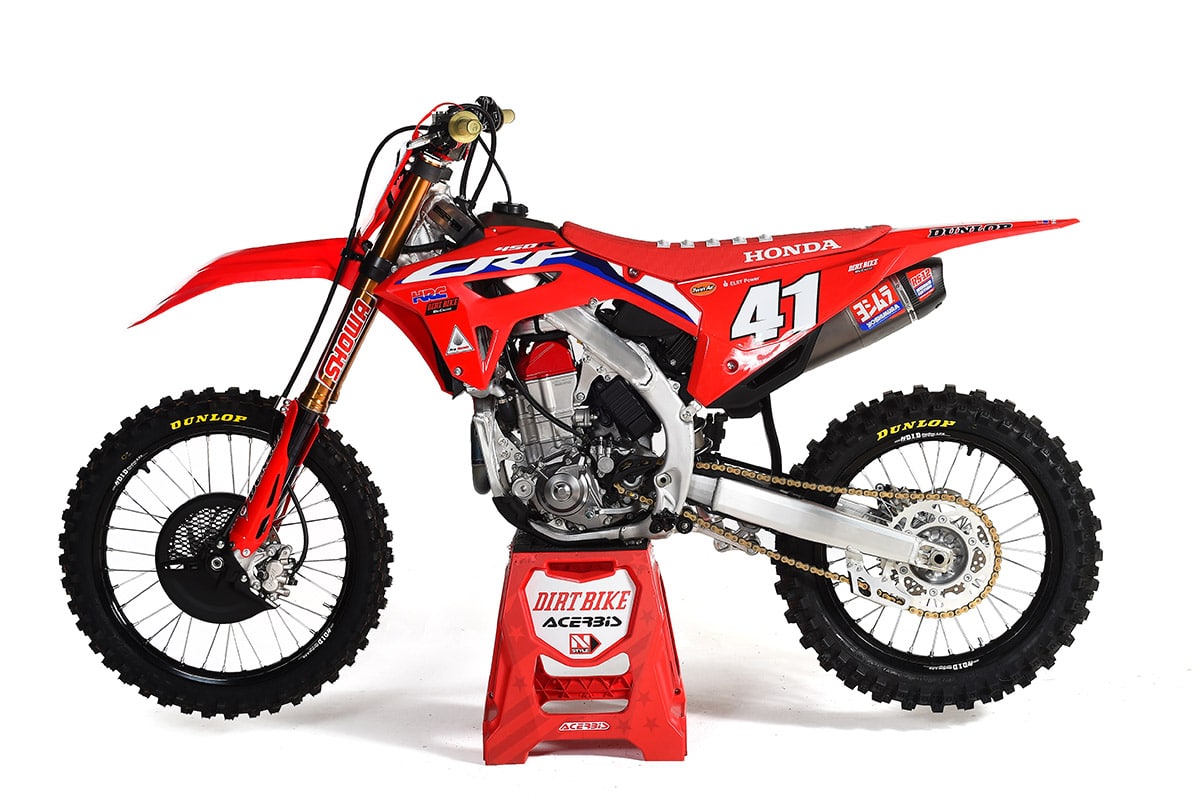 In 2021, Honda redesigned the CRF450R in a big way. The frame was entirely new, the bodywork was redesigned, and the motor was reworked. Honda not only did away with the twice pipes, but also gave the head a single, central exhaust port. The clutch was completely redesigned and given hydraulic actuation through a Nissin master and slave cylinder. All of that is a starting point for the RWE. The bonus list includes:

The MSRP for the Honda CRF450RWE is $12,399. That’s $2800 more than the standard edition. That puts it in a tie with the Kawasaki KX450SR as the most expensive mainstream motocross bike you can buy. The Husky Rockstar Edition is $11,799, and the KTM 450SXF Factory Edition is $11,699. The Kawasaki is a much better comparison to the Honda because it has similar upgrades. The KTM and Husqvarna, on the other hand, are basically early-release 2023 models with a few extra parts and pieces thrown in; no porting, aftermarket exhaust or clutch cover. The Yamaha Monster Energy Edition is simply a graphics package.

The Honda’s suspension is still Showa, which is what both Ken Roczen and Chase Sexton use. It isn’t really an A-kit suspension, though. The ti-nitride coatings are a significant upgrade over stock, but everything else is the same as the production version, right down to the spring rates and shim stacks. As an interesting side note, Kawasaki went with a different philosophy. Jason Anderson, Adam Cianciarulo and the stock KX450 all use Showa. They elected to switch suspension suppliers to KYB for the SR. 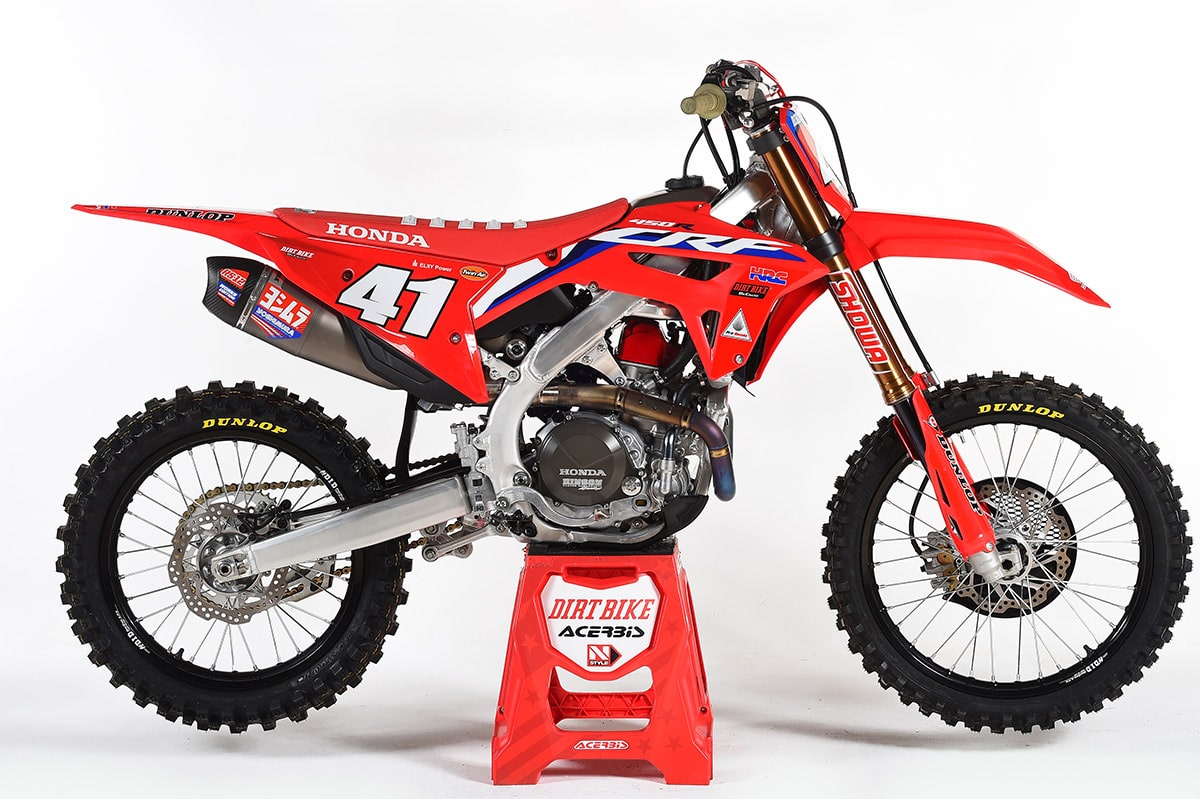 Starting with what you probably already know, the Honda is a brute. Even the stock CRF450R is so powerful and hard hitting that it can be intimidating. The RWE is more powerful yet but not necessarily any harder hitting. The power increase is uniform throughout the rev range. For 2022, the most significant change—maybe the only change—is revised mapping. If you remember, the 2021 Honda 450 competition bikes all arrived with funky maps, which were later updated. This is the update. You have three maps available on the fly: one flash of the LED on the handlebar is the standard map, two flashes is the mild map, and three is the tangy one. Here’s the interesting part: even though everyone says the Honda is a handful because it’s so incredibly powerful, few riders choose the mildest map. That’s probably because the Honda is a little sleepy down low (by modern 450 standards), and the mild map doesn’t help that. It just kills some peak power and over-rev. The net result is a narrower powerband. The standard and aggressive maps go further on top, meaning that you don’t have to shift as often; you just have to hold on tighter. Honda also has traction control available on the same map switch. In most situations it doesn’t make a big difference, but in soft soil it tames the bike considerably.

The Honda’s strongest point is cornering. It’s a light bike with very responsive steering. On our scale, the 2022 CRF450RWE weighs 234 pounds. That’s a pound heavier than the standard model, which is understandable; it has a lot of extra parts. The bike feels light and drops into turns with very little effort. Sometimes it gets a little busy going into highspeed corners, though. After a year of riding the standard model, we’ve come to believe that’s the result of softish rear suspension. There’s a little too much chassis movement. Riders also find that the Honda CRF450RWE suspension feels quite different from the standard model’s, despite similar specs. You often go deeper in the stroke. Presumably, this is because of the decreased friction. Most riders will benefit from a stiffer spring in the rear. We already know that the bike is a fantastic pro-level racer. We took our standard CRF450R and gave it to Justin Jones to ride the final two rounds of the 2021 Lucas Oil Pro Motocross season. All it took was suspension work. We haven’t yet changed the spring rates on our CRF450RWE, but we know the path to take.

There’s no question about it, the Honda Works Edition is the sexiest bike in the pits. That already has us hooked. On top of that, the upgrades provided in this special edition are all legitimate; we would probably go for every one of them. The Yosh pipe and the ported head combine for a real-world power increase. The Hinson clutch is something that all Honda owners consider sooner or later, and the suspension coatings increase the lifespan of the fork and shock. Ken and Chase get more, of course. If you want everything they have, it’s not so complicated. All you have to do is beat ‘em.