The bike raced by Team Honda HRC riders Jett and Hunter Lawrence, the CRF250R has been completely redesigned for 2022, Honda revealed today. The all-new model features a host of engine and chassis changes leading to improved acceleration on corner exits, increased agility, and better endurance over a race distance.

Since its 2004 introduction, the CRF250R has amassed nine Regional AMA 250SX Supercross titles (including the 2019 and ’20 East Region crowns), plus two AMA 250MX Championships. Phoenix Racing has also won the last three AMA Arenacross titles with the CRF250R, with Kyle Peters going undefeated during the 2021 season. With seven of 12 rounds completed, Jett and Hunter Lawrence have both earned 250MX overall wins in the AMA Pro Motocross series, and they sit second and third in the title chase, respectively. 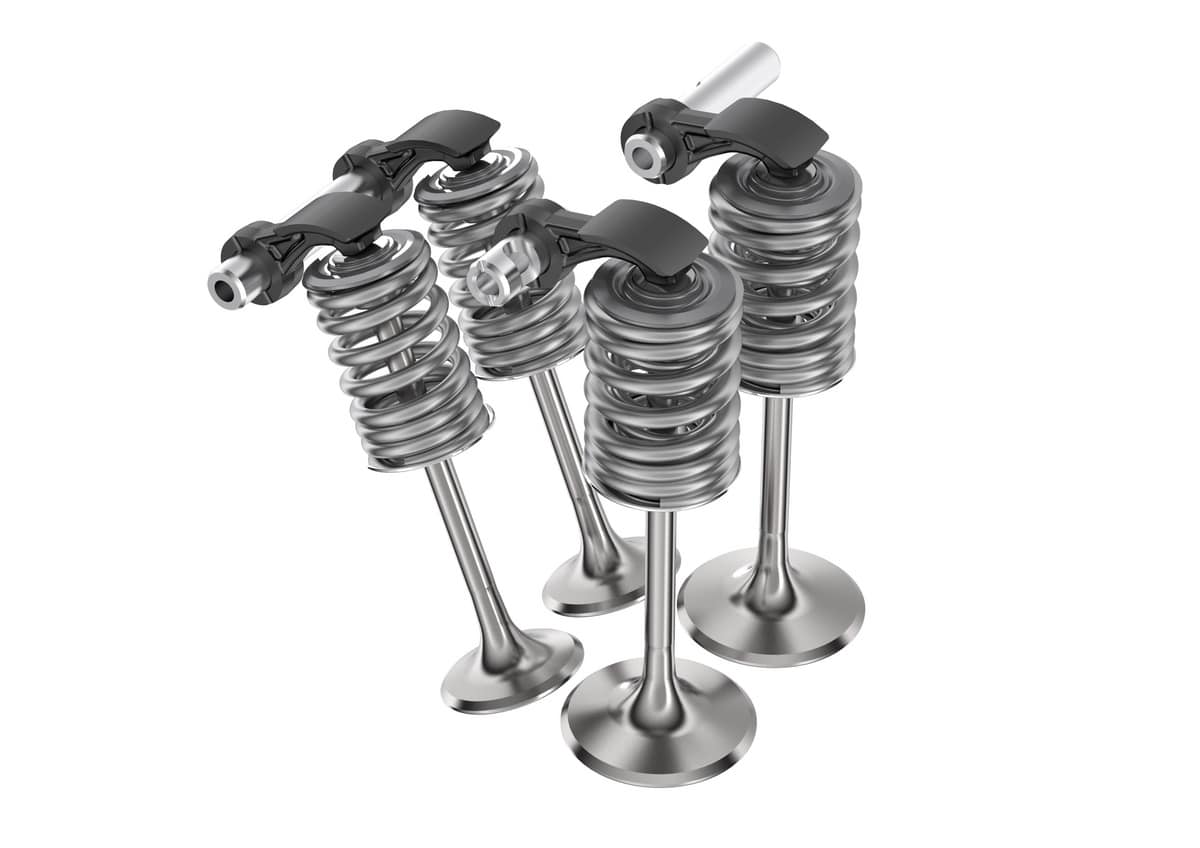 Nonetheless, Honda engineers weren’t interested in letting the model rest on its laurels for 2022, as they introduced a host of updates that raise the bar for usable power, impeccable handling and robust durability, by boosting engine performance, increasing toughness and cutting weight. The redesigned engine produces more low-rpm torque without sacrificing usable top-end power, resulting in a broader powerband. Chassis updates delivered significant weight savings and improved ergonomics while preserving the model’s renowned handling prowess. A redesigned exhaust system and additional lightened components resulted in a substantial reduction of 8 pounds, for a 229-pound vehicle curb weight. In addition, durability was improved by thoroughly reexamining the engine, its cooling system and the drive components, while notable improvements were also made to the clutch. 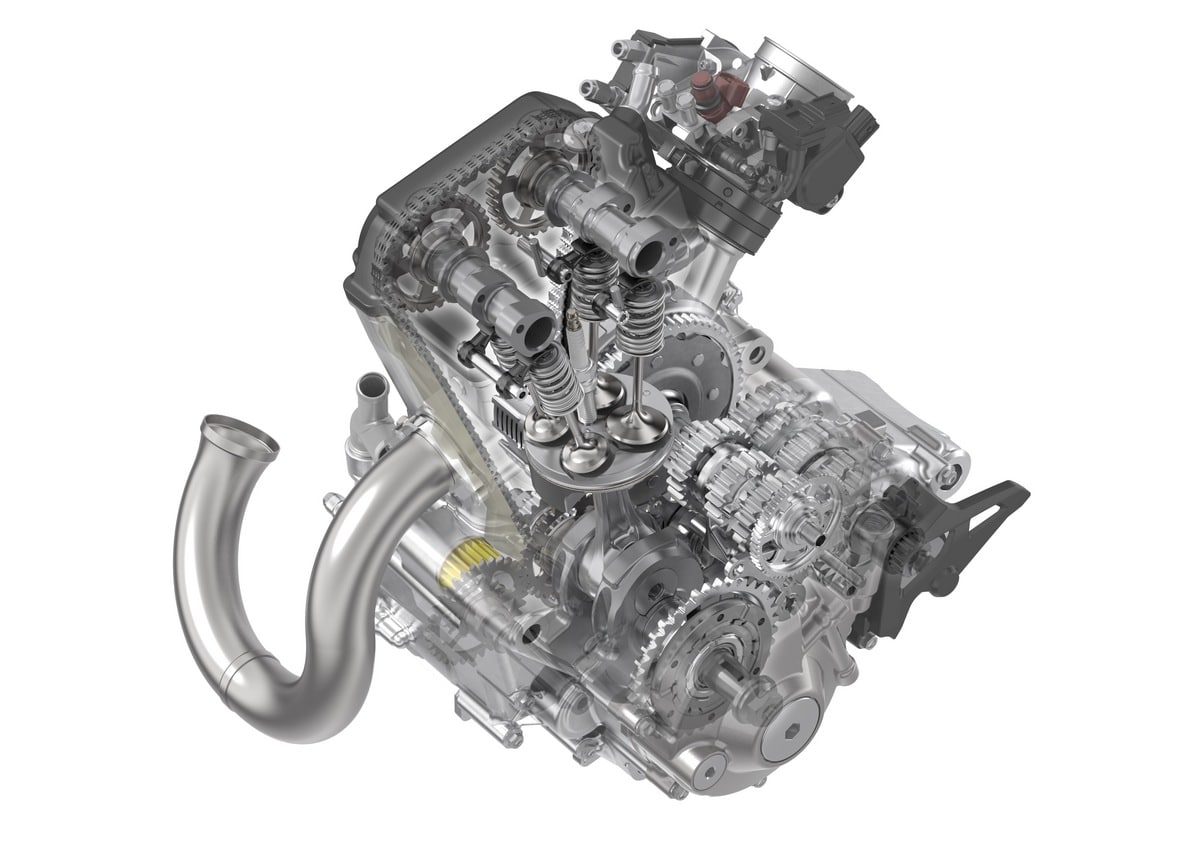 “The CRF250R has always been all about racing, and its success record proves that, with top results at the factory level by Jett and Hunter Lawrence, and also in the amateur ranks,” said Brandon Wilson, Sports & Experiential Manager at American Honda. “With reduced weight, increased power where it matters most and improved durability, the all-new 2022 CRF250R is more competitive than ever, and we can’t wait to see what the Lawrence brothers and all Red Riders do with it on motocross tracks across the U.S.”

In order to achieve the design goals of increased power and improved durability, the CRF250R’s 249cc liquid-cooled, single-cylinder, double-overhead camshaft four-valve engine is significantly updated, boosting low rpm torque through modification of the air intake, revised valve timing and a straightened exhaust port with single exhaust header and muffler. Together, the changes deliver a 20% increase in power at 6,500 rpm, while strong top-end power is retained. Meanwhile, the chassis—already exemplary on the previous generation—borrows heavily from that of the latest-generation CRF450R, resulting in reduced vehicle weight. The redesigned frame has optimized flex characteristics, while the modern bodywork facilitates rider movement and is more easily removed. The combination results in reliable tracking, precise turning, exemplary straight-line stability and overall rideability, thanks in part to an 8-pound-lighter vehicle weight.

For 2022, this bona fide closed-course off-road weapon is all-new, with the same upgrades as the motocross-focused CRF250R. Those changes, which result in reduced weight, more low-end power and improved durability, are particularly well-suited to closed-course off-road series such as NGPC, GNCC and WORCS—the realms of top teams like SLR Honda, JCR Honda and Phoenix Racing Honda. Making the bike even better suited for those applications, the CRF250RX comes standard with model-specific features such as a resin 2.1-gallon fuel tank, dedicated suspension and ECU settings, an 18-inch rear wheel and plastic hand guards. 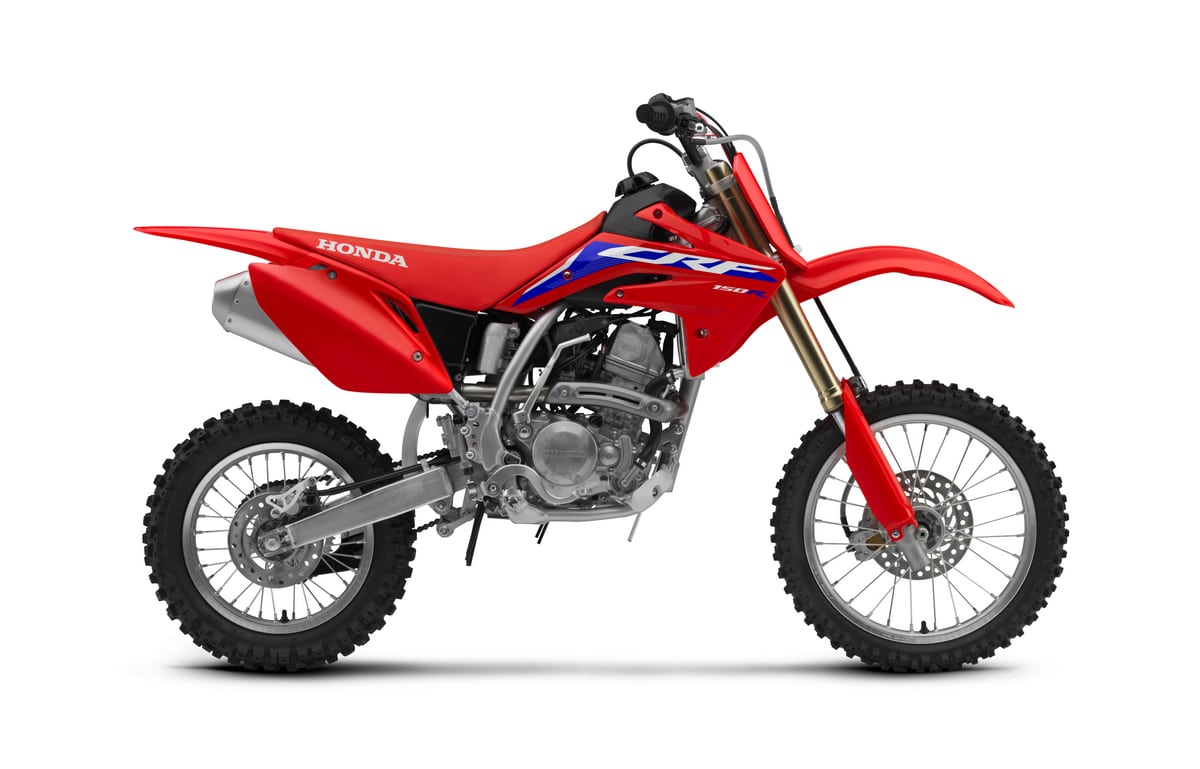 The powersports industry’s most popular mini motocrosser, the CRF150R is offered in both standard and Big Wheel versions, the latter featuring larger wheels, a higher seat and additional rear-suspension travel, making it a great choice for taller riders. Honda’s smallest motocross model boasts Showa® suspension, including a 37 mm inverted fork and a single shock mated to a Pro-Link® rear linkage system, plus a Unicam® four-stroke engine that is unique in the mini MX world, delivering a strong but smooth spread of power across the rev range.

Few motorcycles can lay claim to being as versatile as the fun but capable CRF250F—a great choice for appropriately sized riders getting their feet wet off-road, but also very well suited for tackling challenging terrain at the hands of more experienced riders. Featuring Keihin electronically controlled fuel injection, the clean-running, low-maintenance CRF250F is year-round off-road legal in all 50 states. The long-stroke, air-cooled SOHC engine puts out strong-but-manageable acceleration, while the confidence-inspiring Showa suspension delivers a compliant ride in varied terrain. Add it up, and it’s no wonder that the flagship of Honda’s CRF Trail line is the industry’s top-selling full-size dirt bike; after all, it’s like owning multiple dirt bikes for the price of one!

CRF125F
Honda’s hugely popular midsize trail bike, the CRF125F is available in both standard and Big Wheel versions, the latter featuring larger wheels, longer-travel suspension and a higher seat that make it an ideal option for taller riders. Both versions make learning to ride a blast, especially since they require minimal maintenance, thanks in part to Keihin electronic fuel injection that delivers year-round 50-state off-road legality. Boasting looks that mimic those of the CRF Performance line, the CRF125F and CRF125F Big Wheel promise years of recreational trail-riding enjoyment. 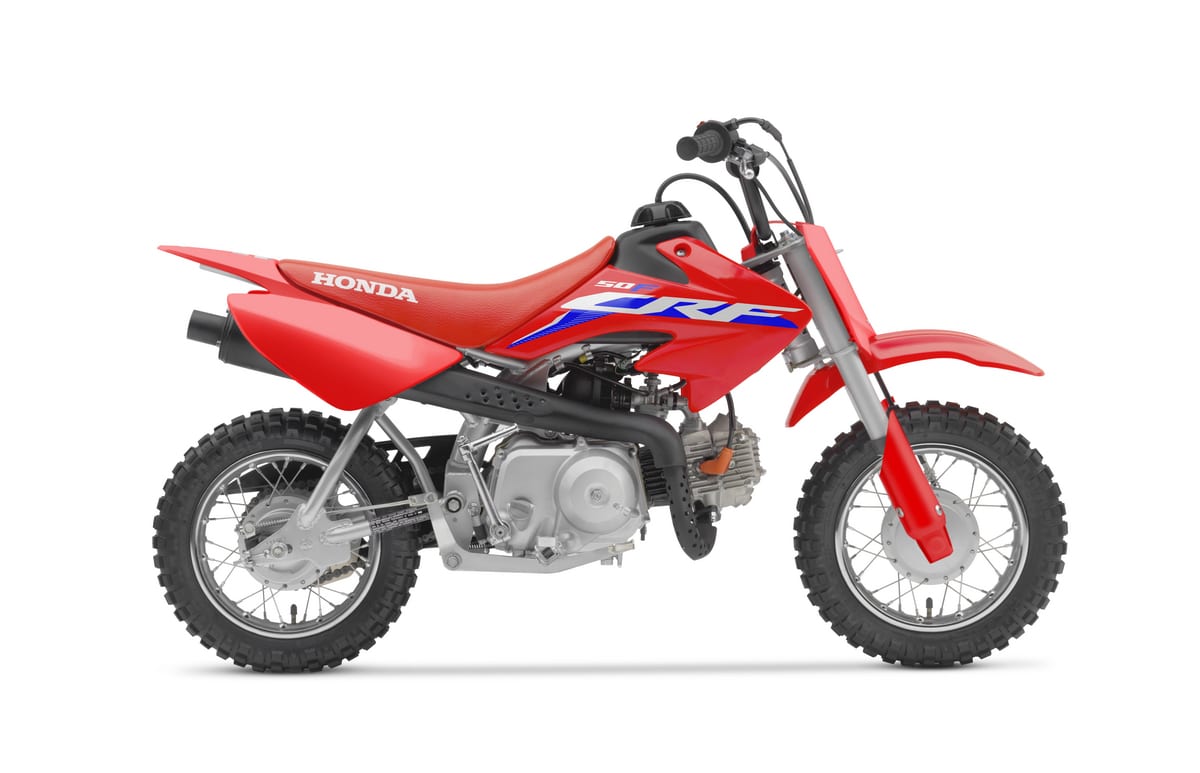 Responsible for welcoming legions of enthusiastic youngsters to the world of motorcycle riding, the pocketsize CRF50F is the powersports industry’s most popular 50cc trail bike. Considering its list of features, it’s no wonder: the fun-but-reliable 49cc air-cooled four-stroke engine delivers manageable power, and the bike is off-road-legal year-round in all 50 states. Suspension comprises an inverted fork and single rear shock. The low seat height and automatic clutch help little folks get acquainted to riding, while parents and guardians appreciate the machine’s reliability and low maintenance.