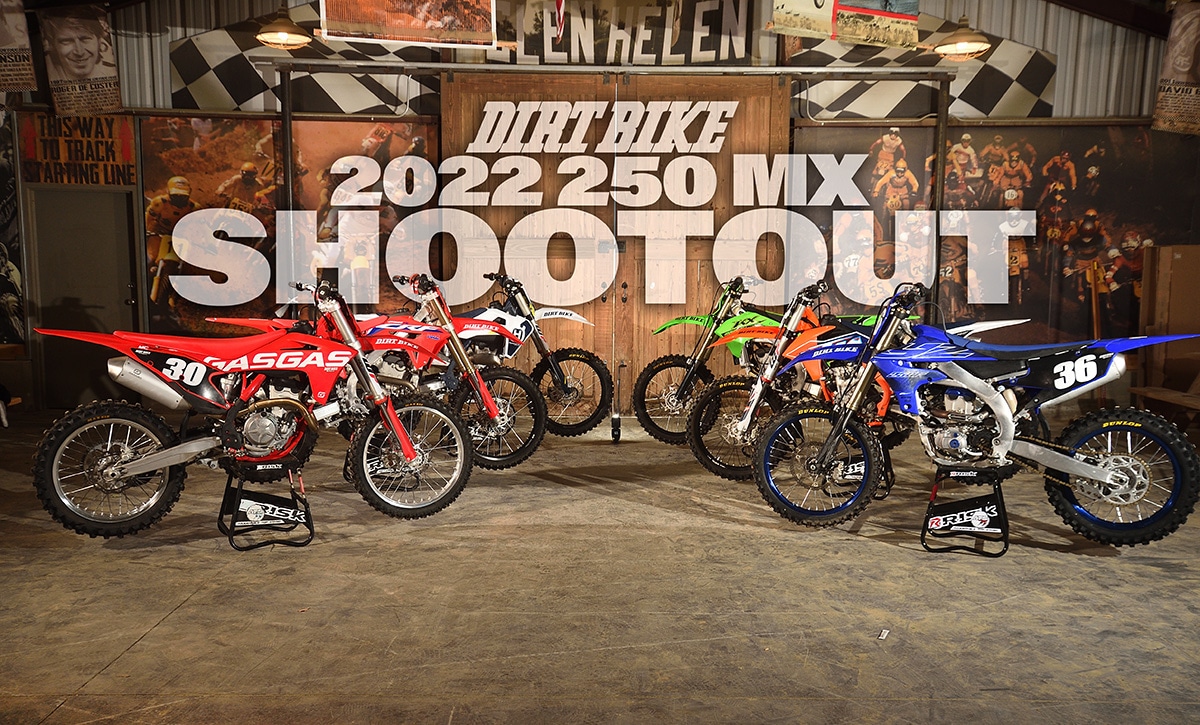 Last year was brutal. The 2021 250 MX shootout was the toughest comparison in the 51-year history of [Dirt Bike Magazine]. The 250 class, or MX2 or Lites, whatever you prefer, had evolved to near parity in performance. Choosing a winner was more about who we asked and where we rode than anything else. Stopwatches and dynos were of no use.

Now, the class of ‘22 has arrived and it doesn’t look any easier. As one simple indicator of how close this contest will be, half of the motorcycles in this group roll off the same assembly line.  The GasGas MC250F, Husqvarna FC250 and KTM 250SX-F all share the same engine and frame, but they are different enough to have separate personalities. Of the other three, only the Honda is dramatically changed for 2022, so all eyes are focused on the battle within a battle between it and the Yamaha YZ250, which won last year.

This year we have no Suzuki RM-Z250. Even though it has a number of fans within the [Dirt Bike] testing crew, we were unable to get a suitable test bike beforehand. It is unchanged so we can defer to the results of the 2021 shootout, which can be found on www.dirtbikemagazine.com. This year we also broke tradition by running all six bikes in absolutely stock configuration, including tires. In a contest this close, even the smallest differences can have a big impact. When it was all over, here’s what we found.

How do they work on the track? This continues to be the toughest call in the motocross world. It’s an embarrassment of riches; never before have five bikes been so equally matched in their effectiveness on the track. But that doesn’t mean they’re all the same. Each of the 2022 250 motocross bikes appeals to a slightly different type of rider. Here’s how the podium looks:

We love the fact that Yamaha doesn’t bow to the trends that come and go in the motocross world. The YZ250F is a different bike in every way. That starts in the unorthodox motor configuration and continues in Yamaha devotion to incremental development of the KYB suspension components.The YZ250F has the most user-friendly power in the 250 class. That might not be reflected on any dyno chart, but the Yamaha motor provides the most immediate response to rider input. The Yamaha is the best bike for the average rider, and its success in the Pro world proves that can be so much more. The YZ does have weaknesses, like any bike. If you’re looking for the fastest bike on the track, the Yamaha ain’t it. It has noticeably less peak power than most of the others. It’s also a little on the heavy side. The YZ250F weighs 227 pounds without fuel. That’s almost 10 pounds more than the lightest of the group. That translates to a less agile feel in turns and in the air. Tall riders might also feel that the YZ is more cramped, particularly in the seat/footpeg relationship. 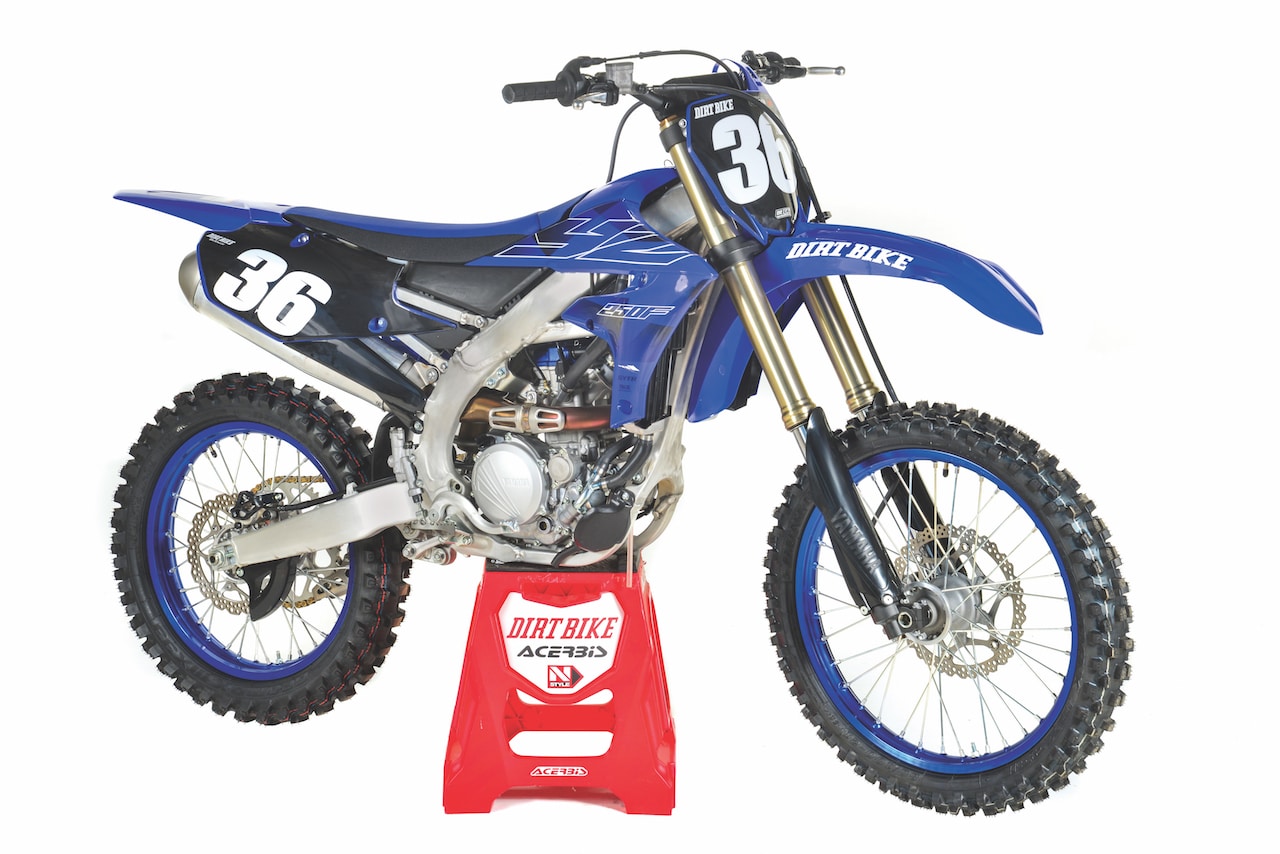 Next on the podium is the KTM 250SX-F

The KTM is a nearly flawless package. It’s the lightest bike in the class and has a phenomenally powerful motor. In performance and handling, it can answer the demands of the best riders on the planet. It’s interesting how the KTM’s type of power has influenced the rest of the class. One by one they have all come to the Austrian way of thinking. If you’re on top of your game and looking for a bike that won’t hold you back at any level, the KTM is the best bike. 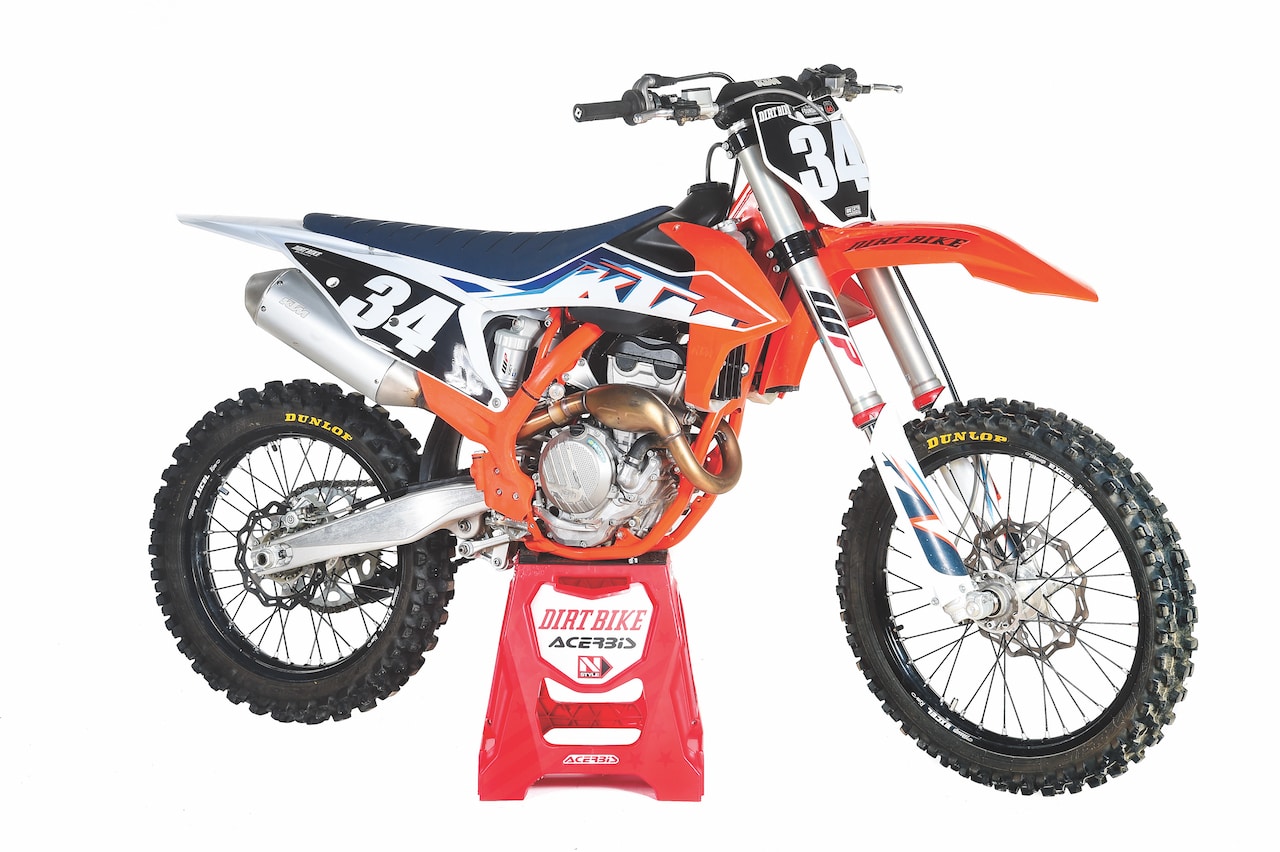 We consider it to be in a near tie with the HUSQVARNA FC250 In the past, the Husqvarna and the KTM appealed to the exact same rider. Now, that’s different. It was a somewhat risky move to lower the suspension and the seat height but it paid off for a very big segment of the riding population. In most other ways, the Husky is equivalent to the KTM. It’s fast, it’s light and it corners outrageously well. 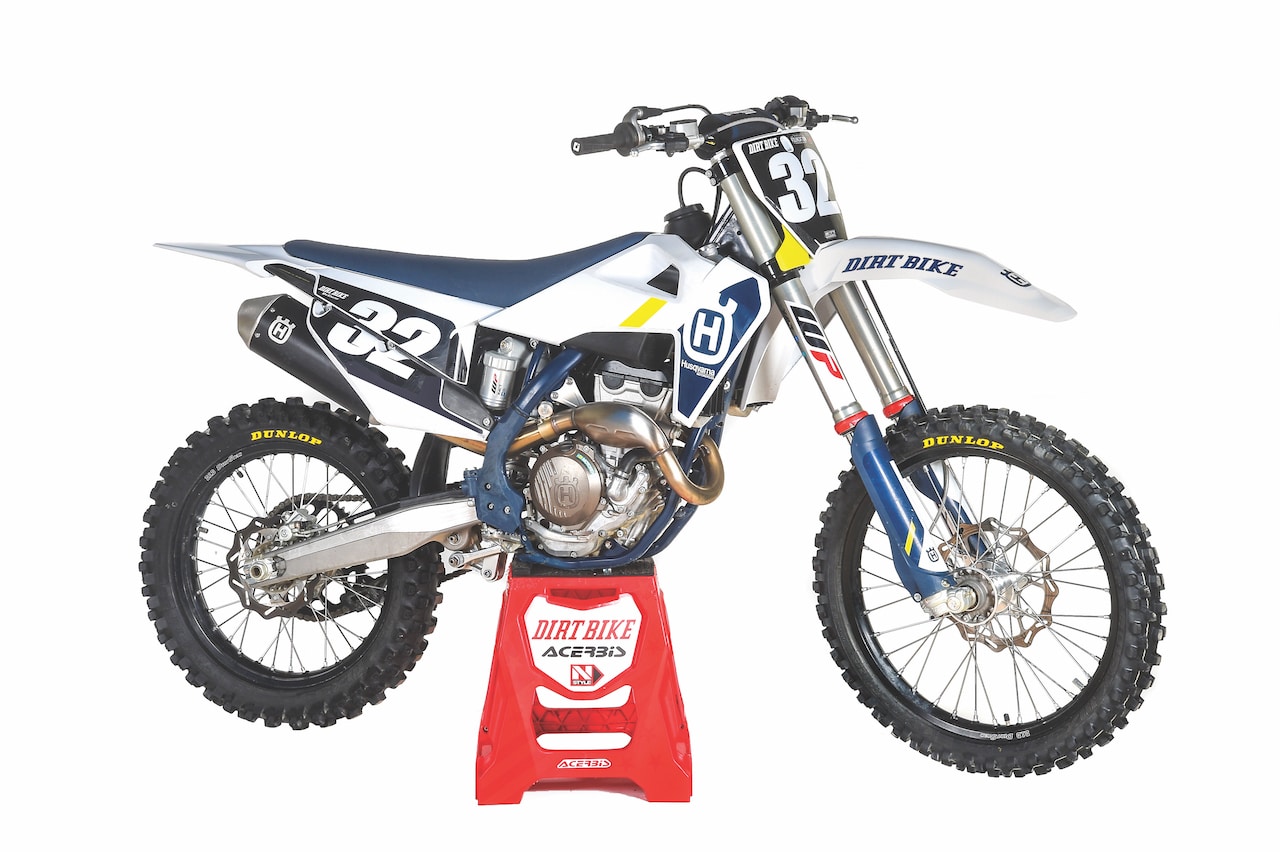 GasGas, Honda and Kawasaki all have their own personalities and their own target riders. We won’t rank them individually because they all have different goals and target riders. The GasGas has many of the same assets as the KTM and Husqvarna, but at a lower price. It’s not quite as powerful as the Husky or KTM on top, and the suspension is noticeably softer. Also, the Maxxis tires don’t offer the same grip on hard pack as the Dunlops of the other two. Does that make it any less effective on the track? For the most advanced riders, perhaps. You can easily bring the MC250 up to a KTM or Husky level in performance as you personalize the bike, just as any rider would do. 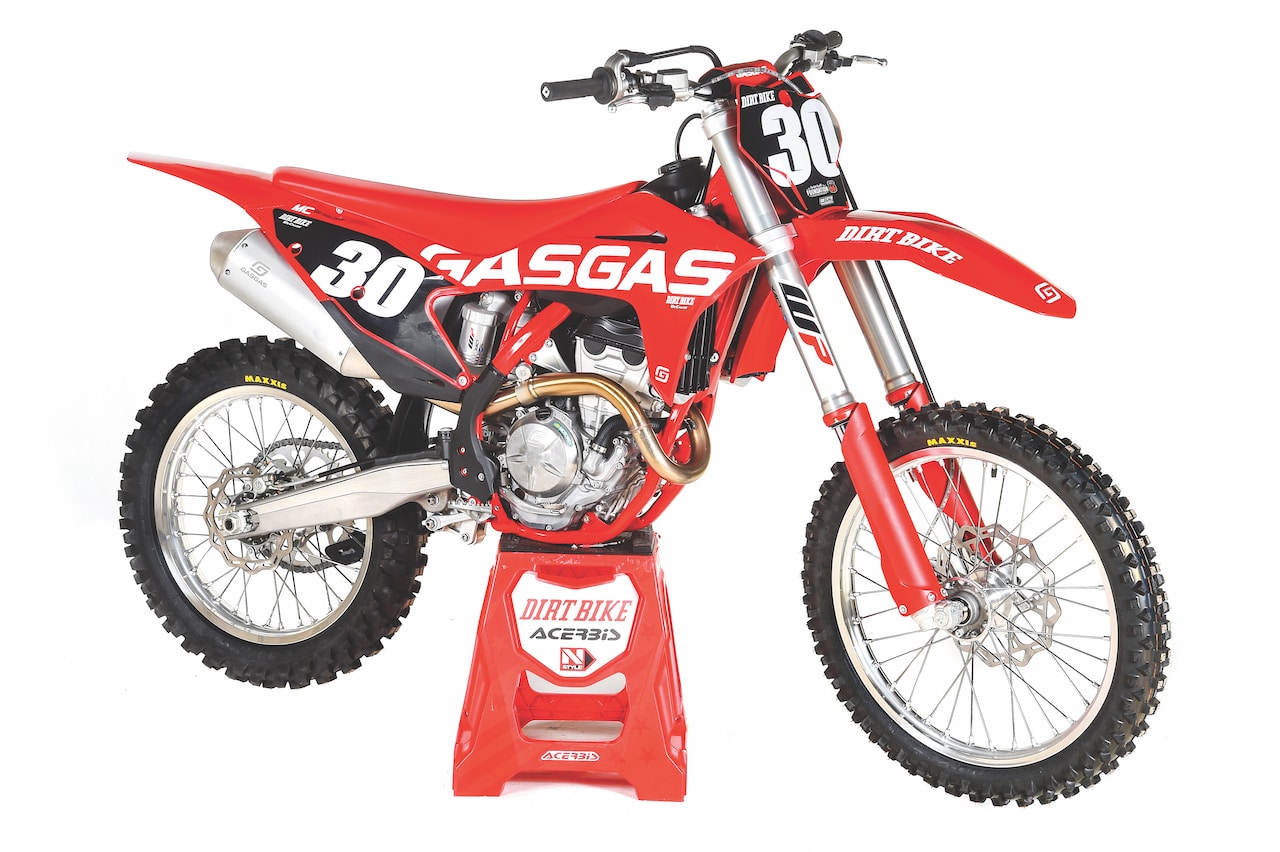 The Honda is improved over last year’s CRF250R in most ways. It gained power, both on top and down low. It’s also super light and corners very well. What holds it back? In a word, suspension. Just like the Honda CRF450R, it seems that the Showa suspension isn’t quite finished. The fork seems good on small bumps, but then reaches a harsh spot mid-stroke. Adjusting the compression damping has little effect. Part of the issue might be the rear suspension, which is soft and causes a weight shift to the rear. As for tires, the Pirellis are popular in Europe, but something about Southern California soil doesn’t produce the same results. In the end, the Honda might well have won with more development in the suspension department. 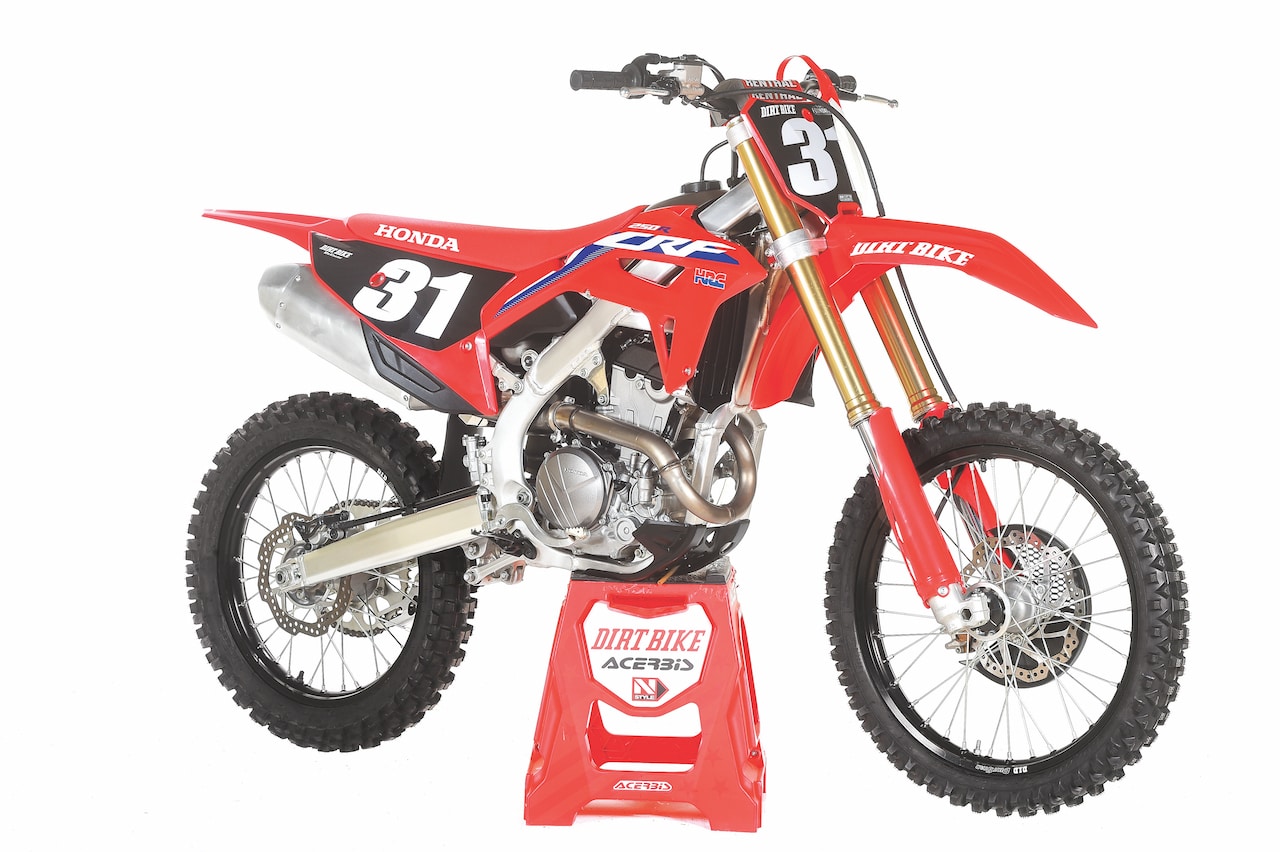 The Kawasaki KX250 is a favorite with some staff members because it’s so much fun bike to ride. Most 250s are a little more work. The throttle response on the KX is instantaneous. It free-revs very quickly, and that means if you drop below the power zone, you can use the clutch to bring it back around [right now]. The clutch is also the lightest of all the 250s. In peak power, the KX is no slouch. It’s virtually the same as the KTM, Husky and Honda at full cry. On the negative side, The Kawasaki is now the heaviest bike in the shootout at 228 pounds, although we can’t really say that’s a true weakness. On the track, you would never know. The most common complaints are that low-end power is weak and the bike is nervous. 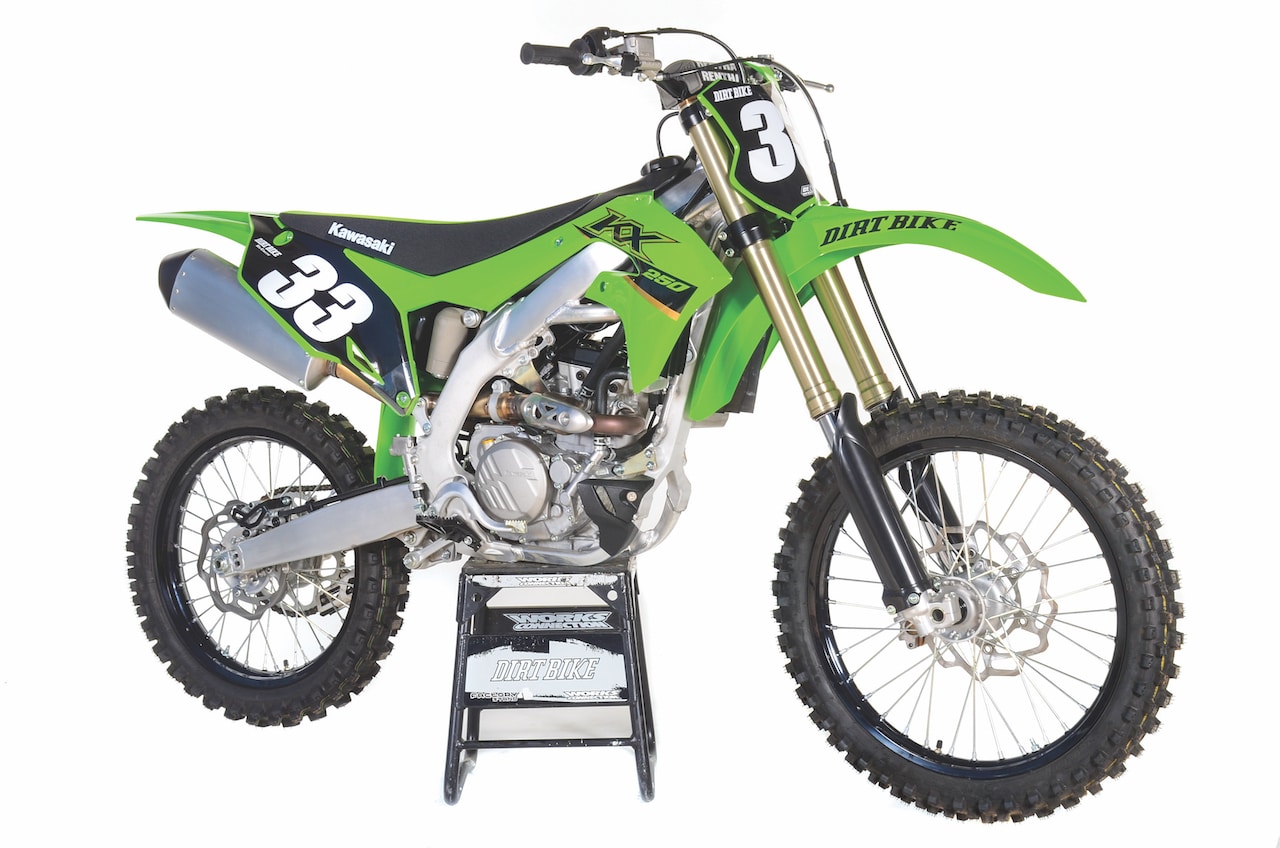 As always, the ultimate decision is yours. This year, we gotta say that the choice is tought, but in a way, that makes it easier. You really don’t have to worry about going wrong.

A PRO MECHANIC’S KTM DUAL-SPORT: BEHIND THE BUILD