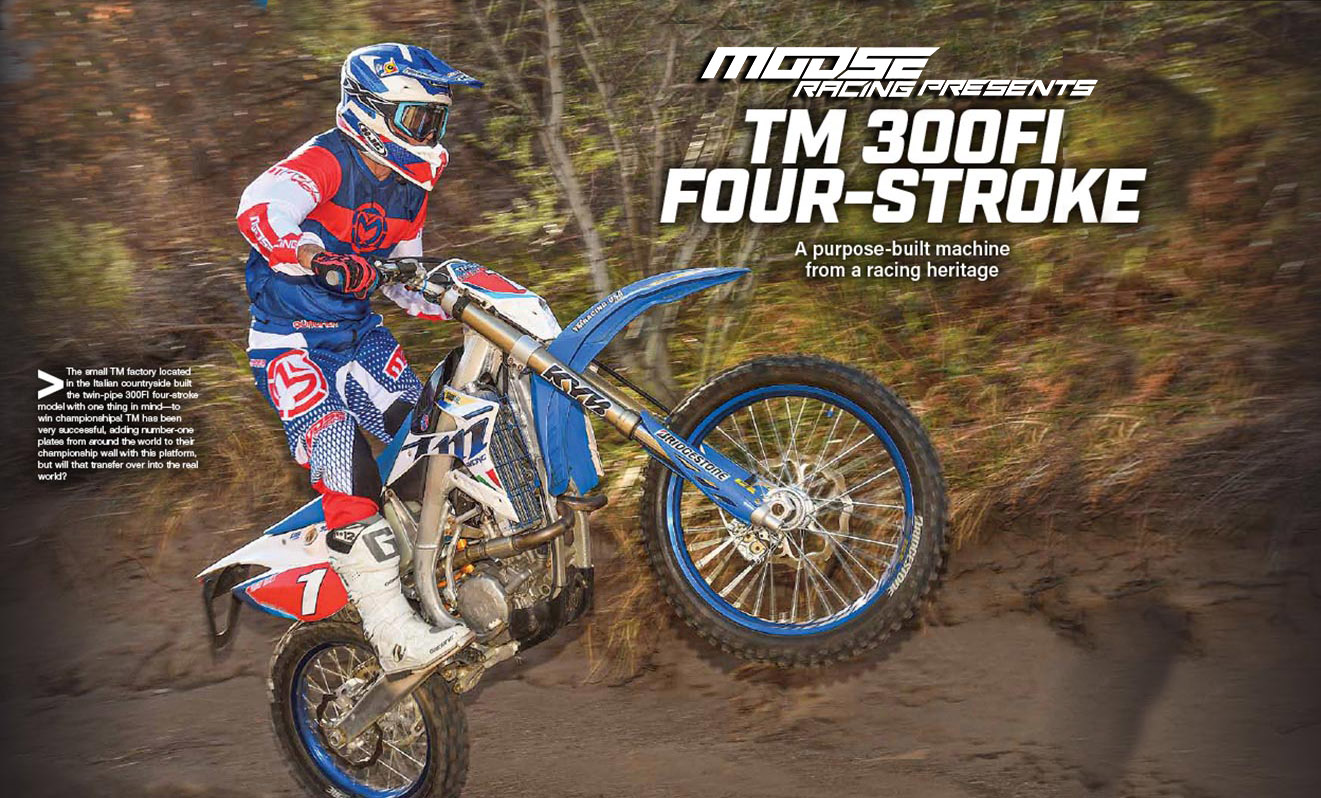 The small TM factory located in the Italian countryside built the twin-pipe 300FI four-stroke model with one thing in mind—to win championships! TM has been very successful, adding number-one plates from around the world to their championship wall with this platform, but will that transfer over into the real world?

RACE VIBES
The 2021 TM 300FI twin-pipe model uses a similar platform to the 250 MX version that was first introduced back in 2018 and is currently being raced on the world GP circuit. Looking at the engine from the outside, we couldn’t tell the difference between the two. Talking with the U.S. TM importer, we found out that the engine cases are identical on the outside, but all the internal machining is different and done in-house by TM. So different that it’s not possible to make a 300cc model out of the 250cc engine.

The overall bike layout and design between the 250cc and 300cc four-stroke models are similar, but unlike anything else on the market in today’s world. The cam chain drives a single gear in the head, which turns the two counter-rotating overhead cams through the gears. Finger-followers are used to open the four valves.

The motor is positioned in the frame so that the intake comes straight down from above where the fuel tank is normally located. The gas is stored under the seat. This gas tank position is not a new concept for TM, as they have incorporated this design in their four-strokes for a few years now. Just like the current Honda 250cc four-stroke, the TM 300FI has two exhaust ports that feed two separate exhaust pipes—one on the left and one on the right.

Although this bike features a very reliable electric starting system, unlike other manufacturers throughout the world, TM still offers a kick-starter to get things done the old-fashioned way—just in case the electric starter does malfunction. This is definitely a smart move in our book, especially when it comes to off-road models.

Chassis-wise, the TM 300FI also stands out in a crowd. Like we mentioned before, the airbox and gas tank locations are similar to Yamaha’s design on their four-stroke MX models, but the TM’s gas-filler cap is located on the right side of the machine. TM is the only Euro manufacturer that uses an aluminum perimeter frame on MX and off-road models. This frame configuration is identical to the 250cc version.

Braking and suspension components are a mix of companies that you won’t see on a production machine anywhere else. The front fork is a Kayaba (KYB) coil-spring design, and in the rear, the unit we tested was equipped with an Ohlins shock. This is an upgrade option available directly from the TM factory in Italy.

Other upgrade options that are on this test unit include a racing wiring harness with an on-the-fly map switch, radiator cooling fan, Neken handlebars, and Bridgestone supplies TM Racing USA with tires for all their test units. The front braking system is compiled of Brembo components, and the rear is all Nissin.

TRAIL VIBES
If someone jumps off of a TM 300FI and says they feel comfortable right away, be very suspicious. This is a unique machine on many levels, but don’t take that the wrong way, because it’s not necessarily a bad thing. Remember, TM has won more than their share of championships on this platform. With the intake location up front, Yamaha riders can relate to the noise produced, but even Yamaha riders comment on how loud the TM is. The gas tank location makes filling up the bike a little odd, but once on the trail, we never thought about this again.

Surprisingly, the 300cc engine produces a lot more low-end to midrange torque than its 250MX cousin and doesn’t need to be revved all the time to produce usable power, but compared to most mainstream off-road four-strokes, it’s higher-revving. Power delivery is progressive and very smooth, never really having a big hit anywhere. This is great for riding trails or a guy that likes a trail vibe while racing. If you are the type of rider who wants a hard hit or lots of excitement when twisting the throttle, then the TM 300FI is not for you. Handling-wise, it feels planted, with the KYB spring fork being very predictable and the Ohlins rear-shock upgrade from the factory is highly recommended.

Overall, the stock setup is on the soft side, but it never bothered us on the trail, even at a decent speed. It does become noticeable when pushing the envelope at trail speed and while riding at the local MX track. When we think of 300cc off-road bikes, trust us, the TM 300FI twin pipe is not that. In fact, it might just be the complete opposite, and that might be exactly what we need. The upgrade options that TM Racing USA offers for every unit are great, and we recommend if you are thinking about purchasing a TM to look into all of them.