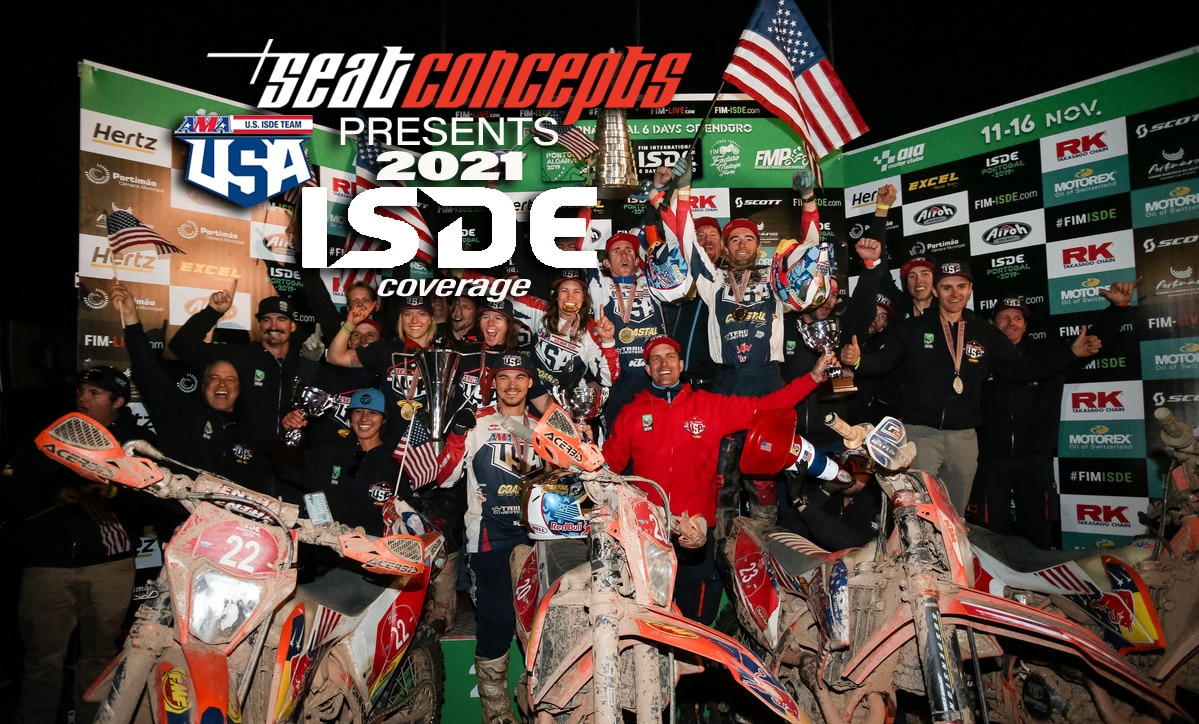 Though the AMA finalized the makeup of the 2021 U.S. ISDE team competing in the 95th International Six Days Enduro (ISDE) several months ago, circumstances forced a last-minute change to the roster. It actually began last week at round six of the AMA National Grand Prix Championship (NGPC) Series in Preston, Idaho. There, FMF/Maxxis/RPM Racing KTM’s Mateo Oliveira went down hard a couple turns in to the Saturday race, painfully stretching ligaments in his chest. Slated to be a member of the GTBN Club with fellow NGPC rider Cole Martinez and AMA Hare & Hound National Championship Series racer Axel Pearson, Oliveira got checked out at a hospital then hopped on a flight to Italy last Monday, believing he could recover enough to be able to make his ISDE debut.
However, when he went to try his 250 XC-F on the training track in Rivanazzano Terme, Italy, on Friday, one big jolt apparently worsened his condition and he immediately knew he wouldn’t be able to ride on Monday. After some discussion, World Trophy Team Manager Antti Kallonen moved Nate Ferderer from the Missouri Mudders to the GBTN squad, as that original trio was considered the one with the best chance to take the Club team overall. However, that left the Missouri Mudders a man short, putting them in the hole from the start.
That set off a flurry of activity.
One of the first options considered was forming an FIM North America Club team with Mudders Reid Brown and A.J. Lehr plus a Canadian who was slated to ride as an independent as no other Canadians were able to swing the trip. However, MojoMotosport rider Josh Knight and Brown proposed something even more interesting: How about Josh’s younger brother Kobee? After all, he was there anyway to shoot video and had actually done well in the AMA West ISDE Qualifier Series. If they could round up a bike and if it was okay that Kobee wore some of Josh’s gear (and scrounged some boots), could the AMA get him the requisite FIM license and take care of the other administrative demands? (By the way, the AMA’s Mike Jolly reported being inundated with phone calls in the middle of the night from nearly a dozen riders back in the U.S. who offered to get on the first flight out if he could use their services.) This was on Friday morning and the Americans were scheduled to get registered then go through tech followed by impounding their bikes. It would be a tall order indeed. However, the FIM granted the request based mostly on the last-minute nature of Oliveira’s injury.
First barrier down.

Next came getting a bike. By this time, the largest manufacturers had no more rental bikes available. Luckily, Josh Knight had some pull with Sherco and arranged for Kobee to snatch a 300 SE that was vacant due to another rider’s injury. Sherco mechanics pulled out the stops to get it ready for tech and impound, which the FIM extended to Saturday morning just for Kobee.
“[Me] riding and racing [the ISDE]—never would’ve guessed it, not in a million years,” Kobee declared. “I was just dumbfounded by how supportive everybody was. Not that I would doubt that anybody would be willing, but everybody was jumping in super-fast. I had full gear setups in a matter of 15, 20 minutes—maybe half an hour.”
Probably Kobee’s biggest concern was getting a large enough pair of boots: “I started looking around because I have a larger foot; like, ‘Who’s the biggest guy here?’ “Luckily, John Beal had exactly my size of extra boots of some A-stars Tech 10s.
“Josh had brought over an extra helmet and we wear the same size Fly gear so we’ll just be doing a little more laundry than planned. “Huge thank you to everybody that stepped up!”
There are, of course, 30 other riders on the U.S. team and probably 10 times as many stories, but that is likely the most unlikely. Now to get on with the actual race tomorrow and see if the U.S. can successfully defend its hold on the World Trophy, Women’s World Trophy and Club team gold.