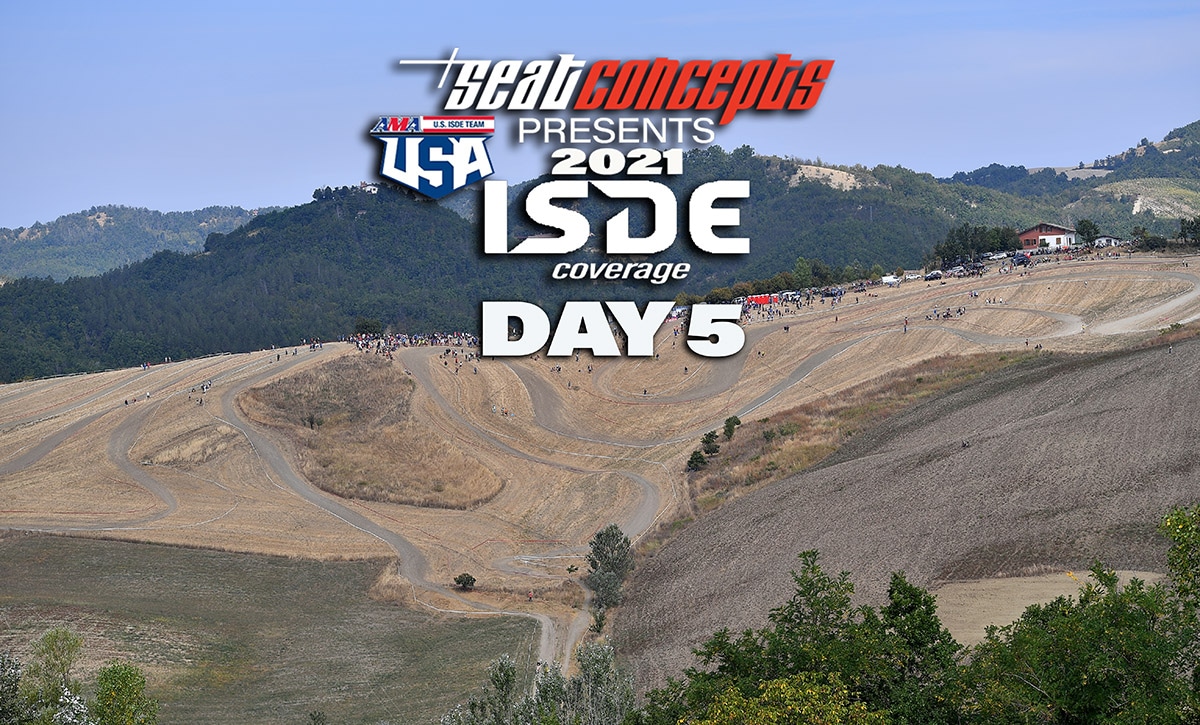 Racing on home turf with friends and family lustily cheering you on is a powerful motivator and something that can spur athletes to greater performances. That’s one explanation for how Italy has so thoroughly dominated the first five days of the 95th FIM International Six Days Enduro (ISDE) in Rivanazzano Terme, Italy. The home team has dominated proceedings on the men’s side of competition and heads into the final motocross tests tomorrow leading comfortably in both FIM World Trophy (WT) and Junior World Trophy (JWT).

Don’t expect the Italians to go for safe finishes, though. As Italian WT team leader Andrea Verona pointed out, “You don’t [want] to decrease [your] focus [just because you’re leading]. It’s always important to keep the focus through [every] day and all the riding so we have to keep the focus we had [earlier in the week] and go for it also on the last day.” The U.S. team that won three categories at the 94th running in 2019 in Portugal finds itself leading only Women’s World Trophy (WWT), which it won for only the second time in history at that race in Portugal. America’s WT team sits in third while its JWT team suffered the loss of Austin Walton yesterday to injury, dooming the previously second-place team. However, remaining riders Cody Barnes and Dante Oliveira put in some of their best rides of the week today as they seek to do the best they can in E1 and E2 classes, respectively.
As well, an Italian team goes into the final day tomorrow leading the Club standings, but it’s a tenuous lead of 20.24 seconds over previous leader Team Ostra Enduro 1 from Sweden. Depending on who has the better trio of motocrossers, that gap could either be easily erased or stretched.

The top American Club team is GTBN which has occupied third since the beginning of the week, but it too will need members Nate Ferderer, Cole Martinez and Axel Pearson to keep it pinned in order to stay ahead of current fourth-place Moto Club Pavia Senior, the Italians about 27 behind. In the WT ranks, Italy has a substantial lead of five minutes, 22.86 seconds over Spain with the U.S. third, 8:32.48 behind the leader. Taylor Robert continued to set the pace for the Americans, finishing second in E2 to Spain’s Josep Garcia who’s the overall individual leader as well. As many of his fellow Americans experienced, Robert seemed to get faster as the week progressed and said, “I just rode really consistent all day and it felt good to end the week on a positive note and feeling strong.” His total test times for the day also put him fourth overall individually behind Garcia, E1 leader Verona and Swede Mikael Persson, who’s second in E1 at the moment.

Robert’s teammates Johnny Girroir, Layne Michael and Ryan Sipes also enjoyed getting back into the Six Days groove and finding that rhythm that seemed to elude them earlier in the week. Girroir was fifth-fastest E1 today; Michael had a great day as well, finishing sixth in E2 for the day while Sipes was eighth in E3. In the JWT category, U.S. fortunes were mixed. Obviously, the bad was Austin Walton crashing and breaking his scapula yesterday, rendering him unable to continue today. The three-hour penalty thus incurred obviously doomed U.S. hopes of doing well and the team plummeted from its high of second to 11th at the end of today.
But the day was not without its bright spots for the U.S. Juniors. First, Dante Oliveira had a breakout day, finishing a strong third in E2 behind Garcia and American teammate Robert; he also earned fifth overall individual for the day in what’s only his third ISDE. “I just started getting a little more comfortable on the bike [as the days went on] and sliding it around those loose turns and really flat-tracking it and letting the bike get loose. I guess confidence every day [got better and I] just built off of that,” Oliveira explained. Cody Barnes didn’t do quite as well as his more experienced teammate result-wise, but he continued to learn more about how to approach Six Days. This showed in his results for the day where he returned to the team hotel sixth in E1, 22 seconds behind fifth-place Girroir.

It was easiest for American fans to cheer its WWT team of Britney Gallegos, Rachel Gutish and Brandy Richards. Of the three, rookie Gallegos had the most to learn and it started coming together yesterday, the desert racer from Colorado actually having more fun the more she rode. While Gutish has been to several ISDEs, this was her first in a few years and her experience helped her to another good finish today. But no one from any team was able to come close to Richards—at least no other woman. She demonstrated no effect from the stitches she received in her right forearm after yesterday’s crash and once again won every test. She also bested a substantial number of males as she finished 69th overall individual and 26th in E2 aboard her KTM 350 XC-F. (Gallegos used a Husky FC 250 while Gutish chose a Husky FX 350.) “I had a lot of fun—especially in cross test four—because it’s super-high-speed and just had a great day all around,” Richards declared.

The U.S. WWT team leads Great Britain by almost 14 minutes and Spain by just over 15 minutes—the biggest margin in any of the categories. For the Club teams, things are more up in the air. Team Italy A took the top spot for the day, 1:16.92 ahead of Sweden’s Team Ostra Enduro 1 with GTBN of the U.S. sixth. For the week, however, Moto Club Sebino leaped to the top of the standings over previous leader Team Ostra Enduro 1 by 20.24 seconds despite finishing fourth for the day. GTBN remains third overall with ISDE novice Cole Martinez continuing to have an outstanding week. He won the first test of the day for the C2 class (his second triumph of the week) and followed that up with finishes of 2-3-2-2 for the rest of the day’s tests. Like Gallegos on the WWT team, he’s just now figuring things out and enjoying things more compared to the beginning of the week. Like Gallegos, Martinez is one of the few riders on day five who wishes there were more days left to race. However, Martinez—and teammates Nate Ferderer and Axel Pearson—is unlikely to get the team any farther up the rankings with only tomorrow’s final motocross test to go as the trio is about four and a half minutes behind the Swedish trio. Still, they’ll need to ride hard in the last day’s test in order to stay ahead of Italy’s Moto Club Pavia Senior which is about 27 behind the Americans. And things can certainly change quickly in one day. Yesterday, Mojo MotoSport (Anthony Ferrante, Josh Knight and Anson Maloney) finished the day in sixth place, but today the group finds itself fifth. NGPC/D37/NHHA (Preston Campbell, Tyler Vore and Tanner Whipple) had been fifth, but C3 leader Vore suffered race-ending injuries in a crash today. Thus, the team plummets to 76th though Campbell and Whipple had solid days. The next best U.S. team is now Trail Pros/U.S. Sprint Enduro (Cade Henderson, Travis Reynaud and Talon Soenksen) which finds itself seventh with Eric Cleveland Memorial (Fred Hoess, Nick Swenson and Joel Tonsgard) holding fast to 10th. Elizabeth Scott Community (John Beal, Jayson Densley and Brian Storrie) inched ahead again, going from 27th to 26th, with the Missouri Mudders (Reid Brown, Kobee Knight and A.J. Lehr) likewise gaining one spot to sit 30th.

For a list of complete results, please visit https://fim-isde.com/2021-results/.