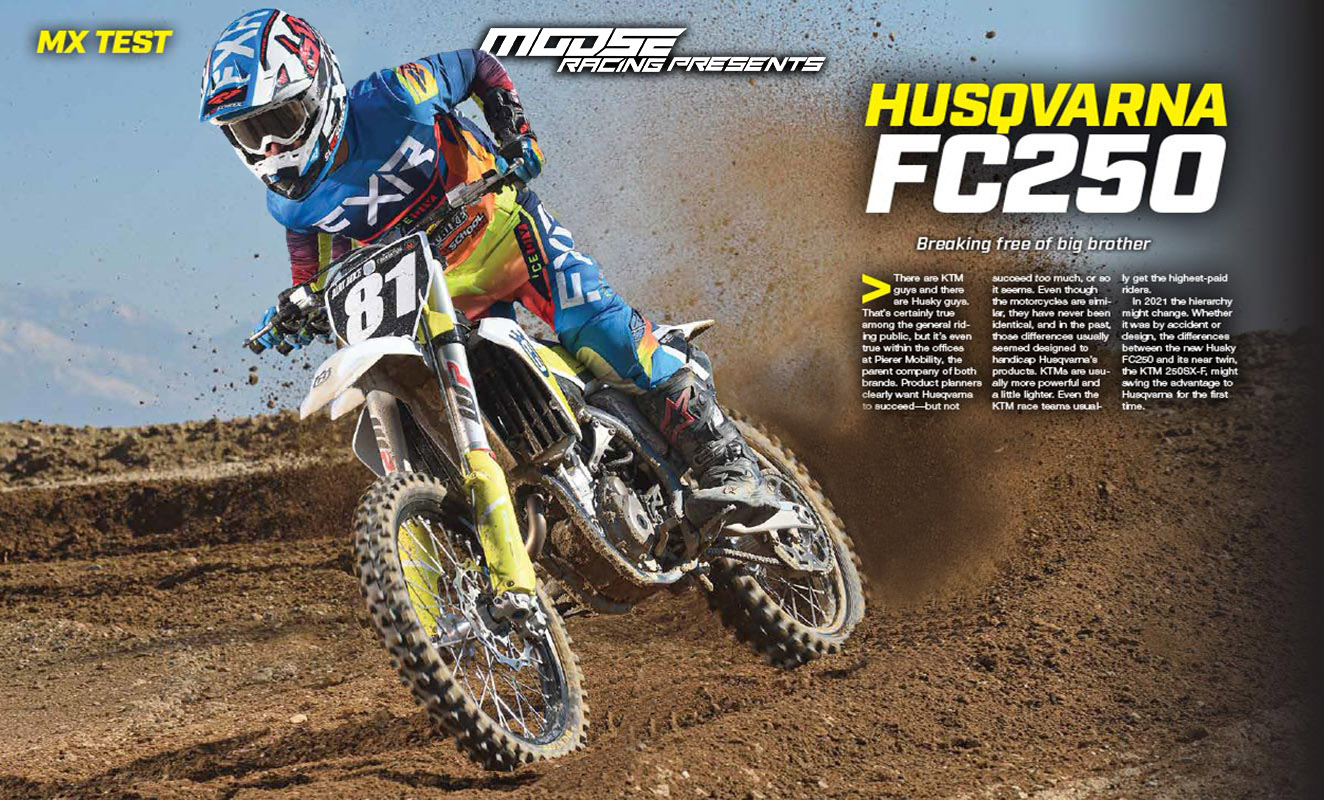 There are KTM guys and there are Husky guys. That’s certainly true among the general riding public, but it’s even true within the offices at Pierer Mobility, the parent company of both brands. Product planners clearly want Husqvarna to succeed—but not succeed too much, or so it seems. Even though the motorcycles are similar, they have never been identical, and in the past, those differences usually seemed designed to handicap Husqvarna’s products. KTMs are usually more powerful and a little lighter. Even the KTM race teams usually get the highest-paid riders.

In 2021 the hierarchy might change. Whether it was by accident or design, the differences between the new Husky FC250 and its near twin, the KTM 250SX-F, might swing the advantage to Husqvarna for the first time.

DIVISION OF LABOR
There’s no denying that the new Husky FC250 is still mostly KTM. It has the same steel frame, the same DOHC motor, the same DDS hydraulic clutch, the same wheels and the same Brembo brakes. The differences are easy to count, and you don’t even have to use all your fingers.

And, as of last year, the Husky got different suspension valving, even though the WP components were otherwise identical. For 2021, the differences in suspension go a little further. The Husky’s fork travel has been decreased by 10mm in order to lower the seat height. WP engineers accomplished this through shortened fork tubes, then they leveled out the bike with changes in the shock and linkage. WP claims that the actual rear suspension travel is unchanged, although we have our doubts—the rear end is visually lower in the rear by no small amount. Internally, the WP Xact 5548 air fork got the same changes across the KTM/Husky line. The mid-valve was redesigned. There’s now an elastomer bottoming system and a tool-free clicker for rebound damping. In the rear, there are new low-friction seals, but it’s the valving and the travel that are distinctly Husqvarna now. The idea is to keep going down the path that the company started pursuing last year. The perception is that the Husqvarna buyer is a little more mature, so the suspension setup is aimed more at the typical vet (i.e., less aggressive and softer). The reduction in travel has the side benefit of appealing to shorter riders.

TRAVEL VS. SEAT HEIGHT
Sometime in the early ’80s, the entire off-road motorcycle industry settled on 12 inches as the perfect amount of suspension travel, front and rear. At the time, there was a race to see how much travel was practical before the law of diminishing returns kicked in. No one wanted to go backwards. Today, the world is a different place. Virtually nothing about shock and fork design is the same, so it’s only logical that we would revisit the question of travel. It’s kind of weird that no one has done it until now. The FC250 has 300mm of travel front and 300 rear. We need to confess that we haven’t taken anything apart and measured it, but when you swing a leg over the bike, it feels dramatically lower than before. This isn’t a subtle, “I think I notice” type of difference. It’s striking. Compared to a KTM, the 2021 Husky is about an inch lower, as best as we can measure; there are differences in the subframe and seat, so it’s not all about suspension. That manifests as more confidence on the start line, even for tall riders. On the track, the difference is harder to quantify. Most riders say that they feel more confident in turns, but some just shrug. A few complain about reduced ground clearance, which is the biggest theoretical shortcoming of reduced travel, particularly on rutty tracks. No one had negative comments about the reduction in fork travel—just the opposite; the 2021 Xact fork is the best incarnation yet of the WP air fork. It’s dramatically improved on small chop and in overall comfort. It still has the distinctive feel of an air fork, which some riders object to. They say that it rides up in turns and has vague feedback when the rider is hunting for traction. Considering the benefits in weight and adjustability, it’s still very easy to justify air.

THE BEST OF THE REST
Aside from the suspension, the Husqvarna FC250 is virtually the same as it was last year. That means it’s very fast. A few years ago, the Husky/KTM 250 motor was easily the most powerful in the class, especially on top. Since then, Honda, Kawasaki and, to some extent, Yamaha have all gone to higher-revving motors in an effort to catch up. Now, in an odd reversal of position, the Husky has better low-end power than most of them. Just to be clear, the FC250 hasn’t changed. It still doesn’t feel especially torquey; in fact, it feels draggy and unresponsive down low. That’s because the Husky likes a lot of throttle. You quickly learn that you have to show commitment to ride the FC250 well. Even at low rpm, you twist the throttle all the way to make it respond. And then you rev it until your ears bleed. You have to ride the Husky like you mean it. Most riders prefer to re-gear the bike by adding as much as three teeth to the rear in order to improve response.

Another carryover from the past is the fact that the Husky is absolutely awesome in turns. You can pick your line and steer through without any drama. The front wheel sticks and the rear wheel follows. So, does the lower seat height contribute to that? It certainly doesn’t hurt. Part of the credit has to go to the weight. The Husky is 219 pounds without fuel on our scale. That’s freakishly light and, once again, that can’t do anything but help.

Other things we love about the FC250 include the brakes, which are incredible; the clutch, which is light and has excellent feel; and the handlebar, which has just the right amount of flex. We consider ProTaper bars another credit on the Husky side of the ledger.

Right now we are deep in the throes of our “250 Shootout.” Traditionally, the Husky finishes right behind the KTM, no matter where they are in the overall standings. We’ve come to believe that’s just how the company wants it to be. This year, however, they might have miscalculated. The Husky, as intended, has more appeal to vets and seniors. Because of the seat height, though, it also appeals more to very young riders and inexperienced riders. There’s still a very distinct pro-KTM group right in the center, but that turf is getting more and more narrow each year. 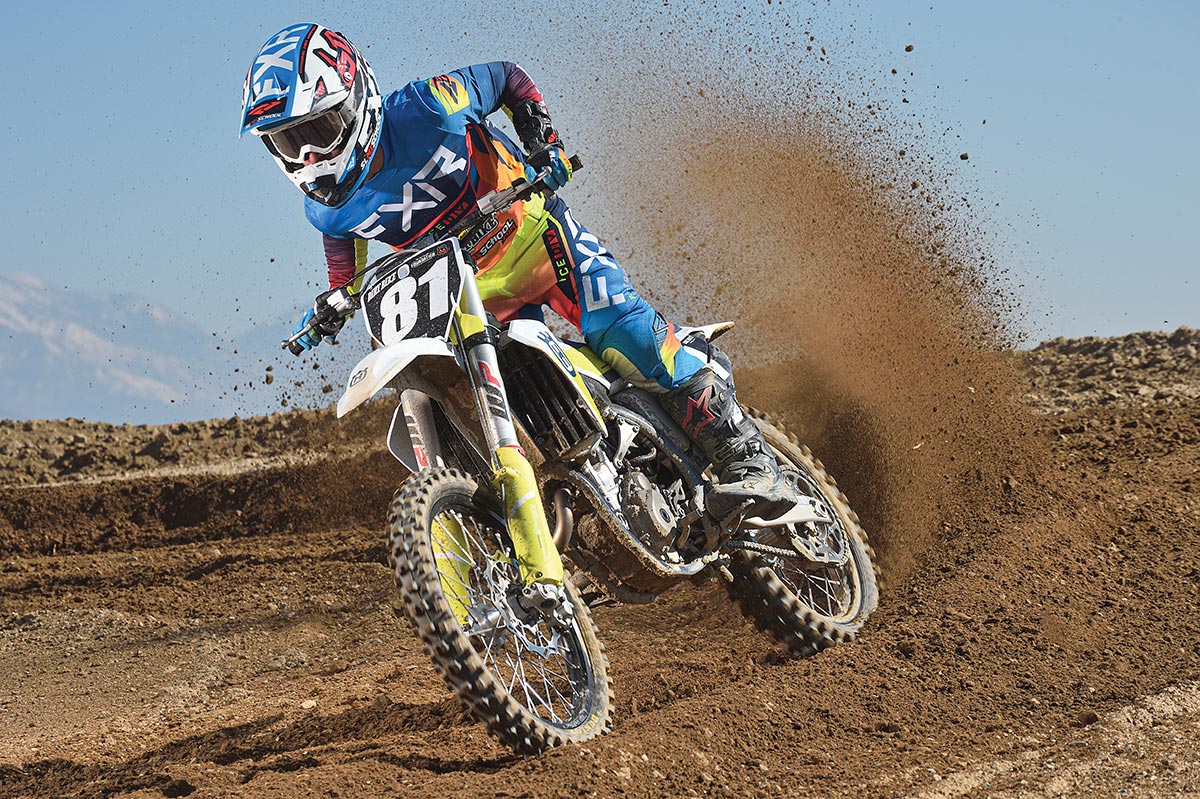 Short riders have rights, too! Sean Lipanovich feels just a little bigger when he rides the FC250.