If only the rider could last this long 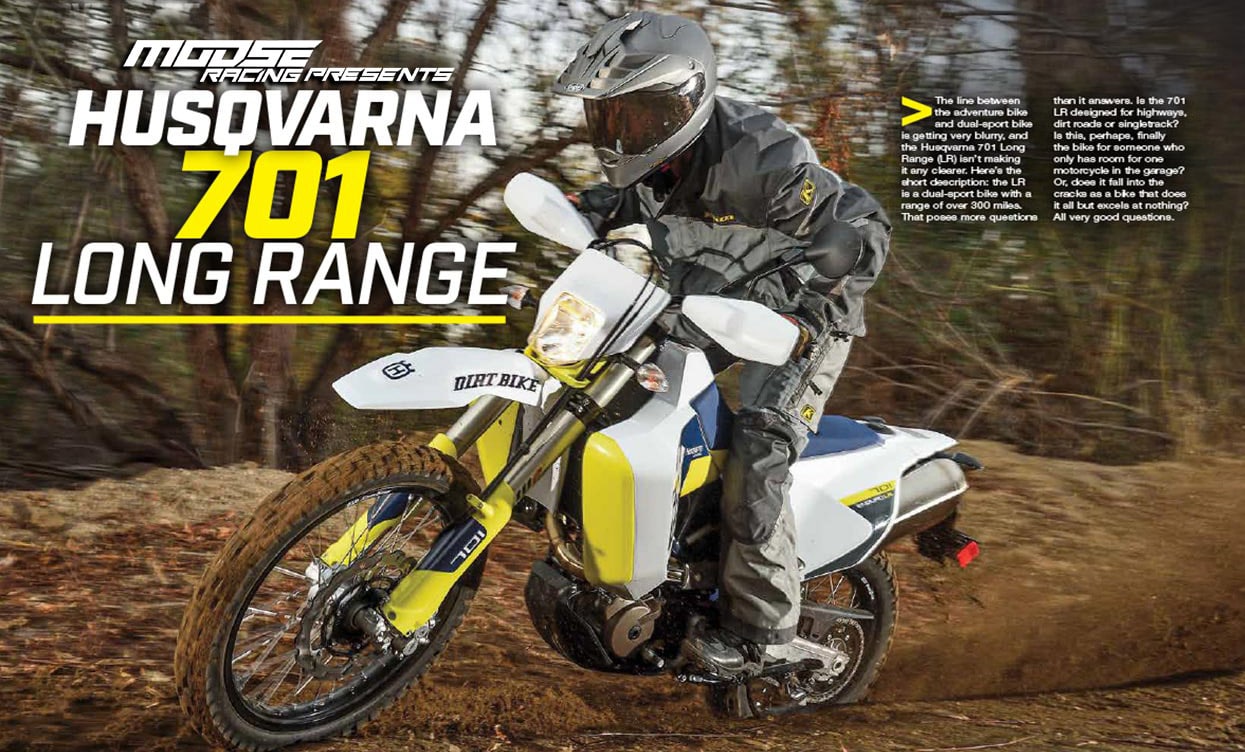 The line between the adventure bike and dual-sport bike is getting very blurry, and the Husqvarna 701 Long Range (LR) isn’t making it any clearer. Here’s the short description: the LR is a dual-sport bike with a range of over 300 miles. That poses more questions than it answers. Is the 701 LR designed for highways, dirt roads or singletrack? Is this, perhaps, finally the bike for someone who only has room for one motorcycle in the garage? Or, does it fall into the cracks as a bike that does it all but excels at nothing? All very good questions. 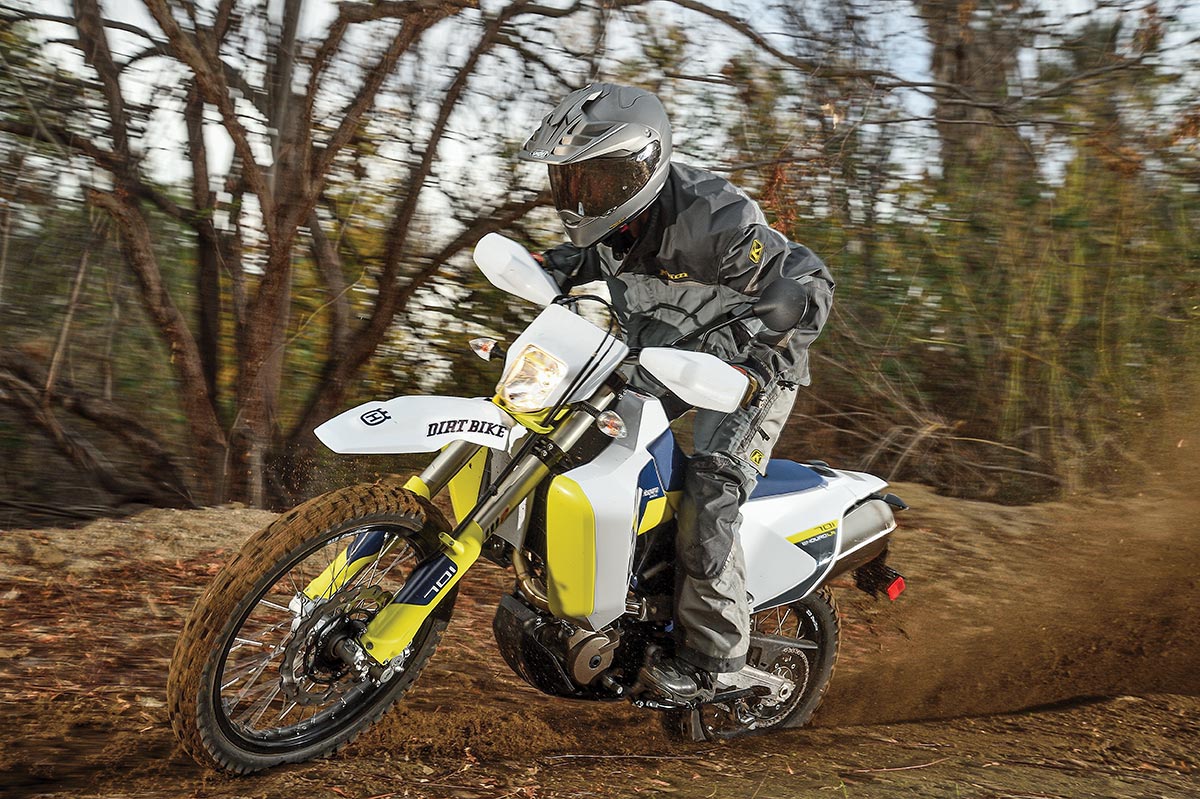 FAR, FARTHER, FARTHEST
To be fair, the foundation of the bike is the 693cc, single-cylinder motor and the trellis frame that inhabits both the Husqvarna 701 Enduro and the KTM 690 Enduro. But, the addition of a 3.2-gallon front tank to the 3.4-gallon rear tank completely changes the character of the motorcycle. It’s huge, but not necessarily in a bad way. The bike now feels more like a KTM 790 or some other middleweight twin. It already had the power to pull that off. The motor is wicked fast and has an exhaust note that even sounds like a twin. But, all of the additional fuel capacity is in the wings outside of the radiator shrouds. On the 701 Enduro, no fuel is carried up there because it’s all in the subframe under the seat. The increased capacity makes the bike super wide and changes the way you ride it. It’s awkward to sit down through turns and stick your foot out, moto-style. It feels a little more natural to stand through the turns like you do on a big twin. Once you make a mental adjustment, it actually works well both ways.

The increase in capacity gives the bike well over 300 miles of range. That’s more than anything in the combined KTM/Husqvarna product lines. Some fuel management is necessary. The two tanks are independent, so if you want balance, you should switch from one to another during a long ride. A handlebar-mounted electronic switch lets you do that easily, and a fuel light warns you when the currently selected tank is getting low. Yes, you can tell when one tank is full and the other is empty. And you can definitely tell when both tanks are full. It adds almost 40 pounds to the bike, which starts off weighing around 340 pounds empty. Is that heavy or is that light? It depends. It’s freakishly light compared to a twin and crushingly heavy for a dual-sport. Even without fuel, the Long Range is 20 pounds heavier than the standard Enduro.

When you ride the Long Range off-road, you simply have to tell yourself that the additional width up front doesn’t matter. It doesn’t in most situations, as long as you keep a reasonable fuel level. But, it still creates a big visual distraction. Otherwise, there are some of the normal adventure bike constraints you have to deal with. The bike’s default is anti-lock braking on and traction control on. This isn’t like the traction control you have on any of KTM’s dedicated off-road bikes, even though it has the same multi-switch on the handlebar. It’s much less subtle. Mode one is strictly for street use and drastically limits the bike’s performance in the dirt. Mode two is less intrusive and can be useful on dirt roads. If you venture onto singletrack or ride in the sand, you can turn the system completely off. Same goes for ABS. You have to repeat the process every time you restart the bike.

If you don’t have any experience with the 701 Enduro, you need to think in terms of bikes like the Kawasaki KLR650 but with twice as much horsepower—maybe three times as much. The suspension and componentry are worlds more advanced than that of the KLR, but you’re still confined to the same type of riding (i.e., wide trails without steep hills or deep sand). Hardcore fans of the 701 and the KTM 690 Enduro will go to the mat insisting that the bike has far better off-road ability. That might be true, but it’s still too big and heavy to mix with the likes of a KTM 500EXC or even a Honda CRF450RL.

TOUR MODE
On the road, the 701 has the power and the stability to ride comfortably with the big bikes of the adventure world. The motor is smooth and even. Though it still has the throb of a single, it’s nothing that takes a toll on long rides; the pulse is actually kind of pleasant. The wind, on the other hand, will eventually beat you up. There’s no fairing to hide behind, and the handlebar is dirt-bike-wide, making the rider into a human sail. You also find that there’s very little space for luggage. The rear tank makes most soft saddlebags fit poorly, and even a tank bag is hard to locate.

Those factors make the Long Ride into a bit of a contradiction. On one hand, you can ride endlessly while your buddies on big twins have to stop more often for fuel. But, on the other hand, you don’t necessarily want to ride that far. They might even be carrying some of your stuff. If your companions are more dual-sport-oriented, then you have to accept the role of the group supertanker. You’re the guy with the bottomless well of fuel, and you learn to dread any conversation that includes the word “siphon.”

The solution, of course, is to seek out other Husqvarna 701 LR riders. If everyone is on a similar bike, everyone will have similar endurance. Luxury and suffering, as it turns out, have one thing in common—both are better when they’re shared with others.