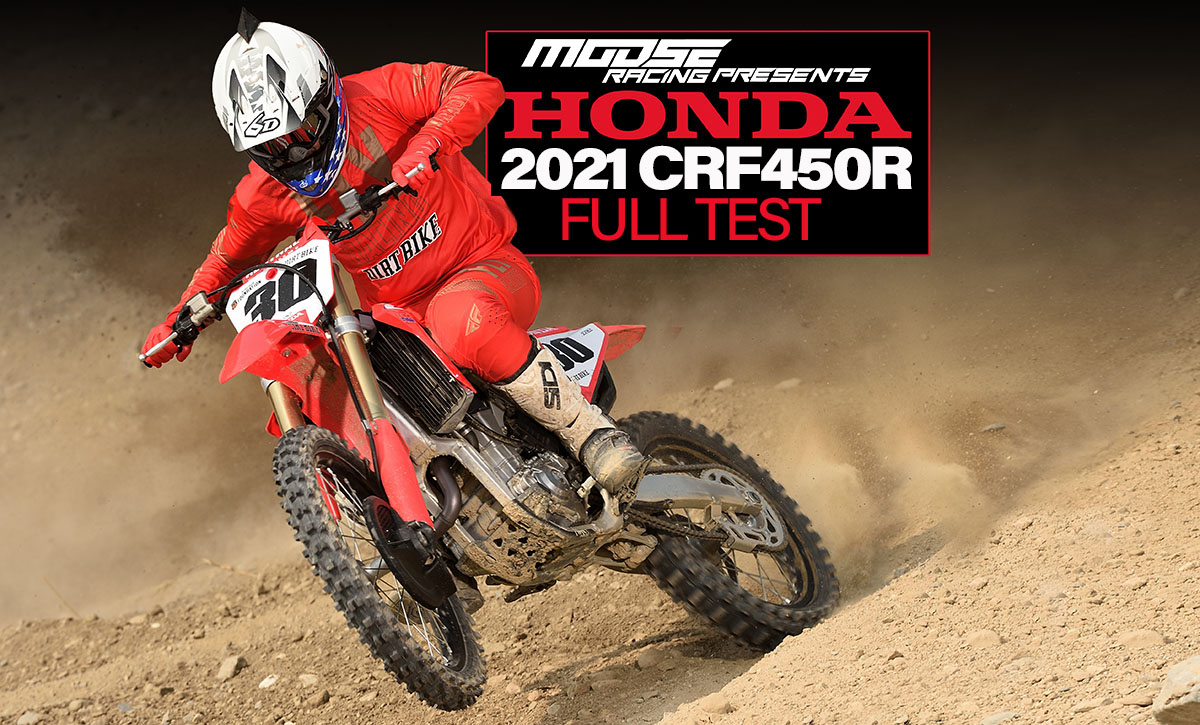 Honda’s big milestones seem to arrive at irregular intervals in the 450 class, but there were four years that changed everything: 2002, 2009, 2013 and 2017. Now, the 2021 model is another bike to remember. It has a new chassis, a mostly new motor and, most important, it represents a change in philosophy.

THE PARTS
You can list the parts that are unchanged quickly and easily. The engine cases look essentially the same, even though the part numbers are new because of minor redesigns. Plus, the general design of the motor is the same. It remains a single-overhead-cam layout with Honda’s distinctive Unicam offset cam journals. It still uses a combination of rocker arms and finger followers to actuate a mix of titanium and steel valves, but the head itself is quite different. It now uses a centrally located exhaust port, which leads to a single-sided pipe. In the past, Honda insisted that twice pipes were effective in centralizing mass by keeping the weight of the mufflers closer to the center of the bike. Now, the single-sided muffler is still mounted just as close to the center of mass, plus there’s less weight to centralize. It was a change that had to happen to keep Honda from falling further behind in the weight race.

Another sore point that was long overdue for attention was the clutch, which was stiff and vague. The engineers redesigned it with an additional friction plate and then topped it off with hydraulic actuation. The Nissin master and slave cylinders are similar to those used by Kawasaki. Interestingly enough, there’s still a path forward for traditionalists who like the feel of an old-fashioned cable. You could, theoretically, revert back with some simple machine work. No one who rode the bike would even consider this, but we know there are some die-hards out there who might think about it. The hidden changes go on and on. The fuel pump is smaller. The angle of the injectors has changed, The decompressor was redesigned, and the radiators have a new fin configuration. Honda also rethought the airbox completely. The element now faces downward and is accessed from the side. To make room, the battery was relocated outside the airbox and now sits behind the cylinder.

As far as the chassis goes, it’s the same theme of new parts with traditional layouts. The frame is still a twin-beam aluminum design with Showa suspension components, but it’s lighter by over 2 pounds. The swingarm is narrower, and the subframe is simplified. Honda says the lateral rigidity of the frame is actually less, while torsional rigidity is unchanged. The same type of give and take is employed in the fork; the triple clamp is less rigid, while the fork’s lower wheel mounts are stiffer. The fork also has a 5mm increase in stroke. In back, the shock was reconfigured for less weight, and the linkage ratio is new. If you have a stockpile of Honda parts in the garage, you should also be aware that the rear wheel is slightly different and that your older wheel won’t fit properly.

BITS AND BYTES
Honda’s electronics suite still has a number of different components. The bike has three maps that can be accessed through a handlebar-mounted switch. A little blue light tells you which map you’re in; one flash is the standard one, two-flashes is the milder map, and three is the most aggressive. On top of that, Honda has three levels of traction control with a similar system of flashing lights (green, in this case) to let you know where you are. One flash indicates the lowest level of intervention, and three is the most. When the bike’s electronic brain thinks there’s wheelspin, it backs off slightly, similar to KTM’s single-level system. The final piece of the digital puzzle is launch assist. This function is activated through the electric-start button on the right. With the engine running, you pull in the clutch and press the starter button until you see a purple flash on the left handlebar cluster. One flash allows max revs of 9500 rpm. Two flashes is 8500 and three is 8250. As soon as you chop the throttle or shift to third, launch assist is deactivated. 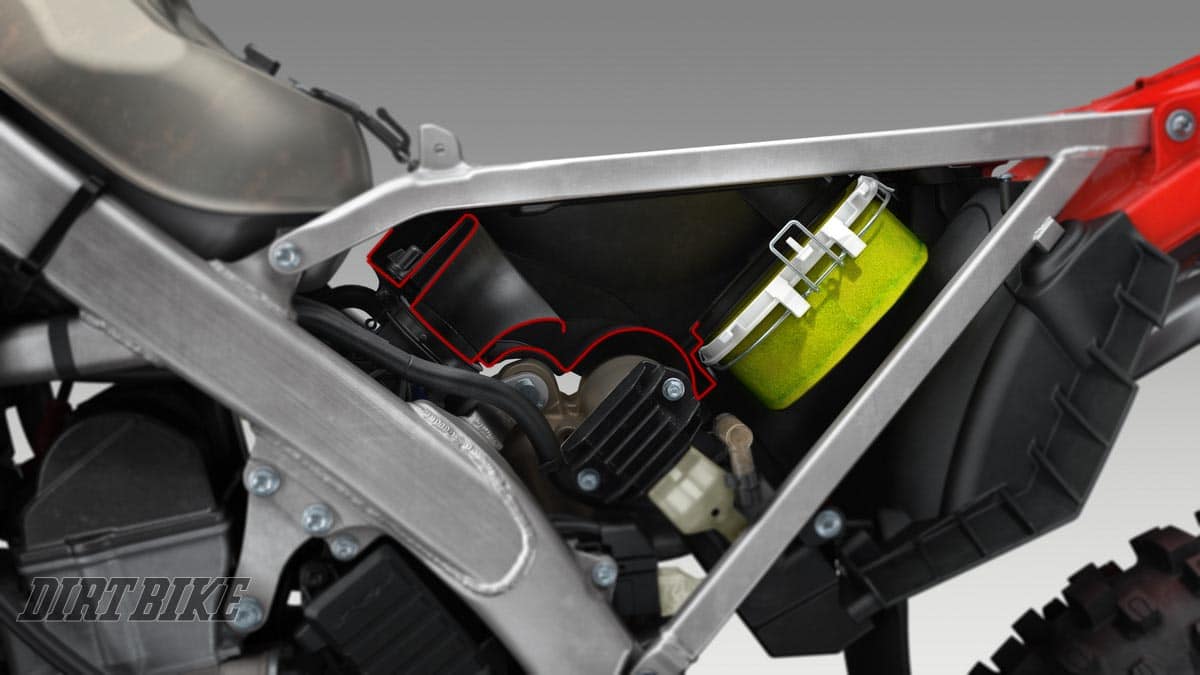 Honda doesn’t yet have a track-side system for cooking up your own maps. The three that come in the bike’s ECU can be altered at the dealer level or by someone with the right cables and software, but it’s not as easy as the systems provided by virtually everyone else.

THE BEAST ROARS
One thing has not changed: the Honda is fast. It was the fastest and most powerful of all the 2020 450s, and it probably will be again. In the standard map, things start getting exciting pretty early, and then there’s a big surge in the middle. The bike ramps up quickly and moves out. On top, it keeps on revving and revving. If you have the notion to hold it on, it won’t slow down until it’s well past 11,000 rpm. That’s much higher than the 250 four-strokes of a few years back.

For the young and strong, there’s nothing as much fun as a 450 that makes this kind of power. Glen Helen’s infamous Mt. Saint Helen seems like flat ground to the Honda. It takes a fair amount of effort to hold on and keep your weight far enough forward to keep from looping out, but that’s why experts are experts. If you want to tone things down, you can always turn to those electronics. Map two is supposed to be the beginner-friendly option, but, oddly enough, it isn’t much help. It kills the low-end torque and creates a hole that’s hard to climb out of. On top of that, a low-end hiccup that’s barely noticeable in map one becomes more pronounced. In map three, the hiccup is still there, but the motor is so much more responsive down low that you get past it quickly. In general, most riders still prefer map one. You learn to work around the hiccup.

Traction control is a much more productive way to modify the power delivery. Setting one is subtle and effective. It seems to slow the rapid rpm gain in the middle of the powerband without killing acceleration. That’s exactly what traction control is supposed to do. Settings two and three are fine for level ground but not at all effective for steep hills where some wheel spin is appropriate. You can always use the clutch to regulate power and acceleration. That’s an option that was never very effective with Honda 450s in the past. The pull was too stiff, and the engagement was inconsistent. The new clutch is much, much better. Not only is the pull light, the engagement is always in the exact same place. It’s hard to say how much credit goes to the new clutch design and how much goes to the hydraulic system. Let’s say it’s half and half, but you won’t find anyone who really wants to go back.

WEIGHT AND BALANCE
Honda finally got serious about losing weight. The 2021 CRF450R weighs 333 pounds without gas on our digital scale. It’s now the lightest of Japan’s 450s. As a side note, before fuel injection and electric start, the Honda CRF450R of 2005 weighed 231 pounds. Most big steps forward involve several small steps backwards.

Quick, responsive steering is a Honda trademark, and the weight loss only makes that more pronounced. The CRF450R has a light touch and a responsive feel. The good news is that it gives you options in how you approach a turn. Aggressive riders can dive into the corner with the throttle on and cut to the inside with very little muscle. More conservative riders can stick to the inside and steer their way through a turn. You don’t have to have the throttle open to make the bike work. No matter who you are, though, you might have to put some effort into setup. Honda made so many changes to this bike that you can’t expect your old Honda settings to work. Even the standard settings aren’t a very good starting point. The shock comes with a 54 N/m spring with the low-speed compression set at 12 clicks, the high speed at 2 ¼, and the rebound at 8 clicks. Sag is supposed to be 105mm. Right from the start, the guys in Honda’s testing department recommended that we try the low-speed compression at 8 clicks. We eventually found it worked better and better as we stiffened it up. The stock rear suspension is a little soft for riders in the 170-pound range, and too much chassis movement can throw you off your game with a bike that steers this sharply.

After discovering that only so much could be accomplished with clickers, we installed a 56 N/m, which is Honda’s optional stiff spring. It made the bike settle down immediately. We still liked more low-speed compression damping than the original setting—right around eight clicks. Additionally, we found that the stock rebound setting was a little too slow, even with the stiff spring. We liked it best around 10 clicks. As always, rider weight and style affect these settings in a big way. Test for yourself, but our findings might be a shortcut.

Once we stiffened up the shock, the fork was excellent. With the rear end of the bike riding higher in the stroke, the front end became cushier and smoother. We started off thinking that we wanted to soften up the stroke, but eventually came back to the stock settings. 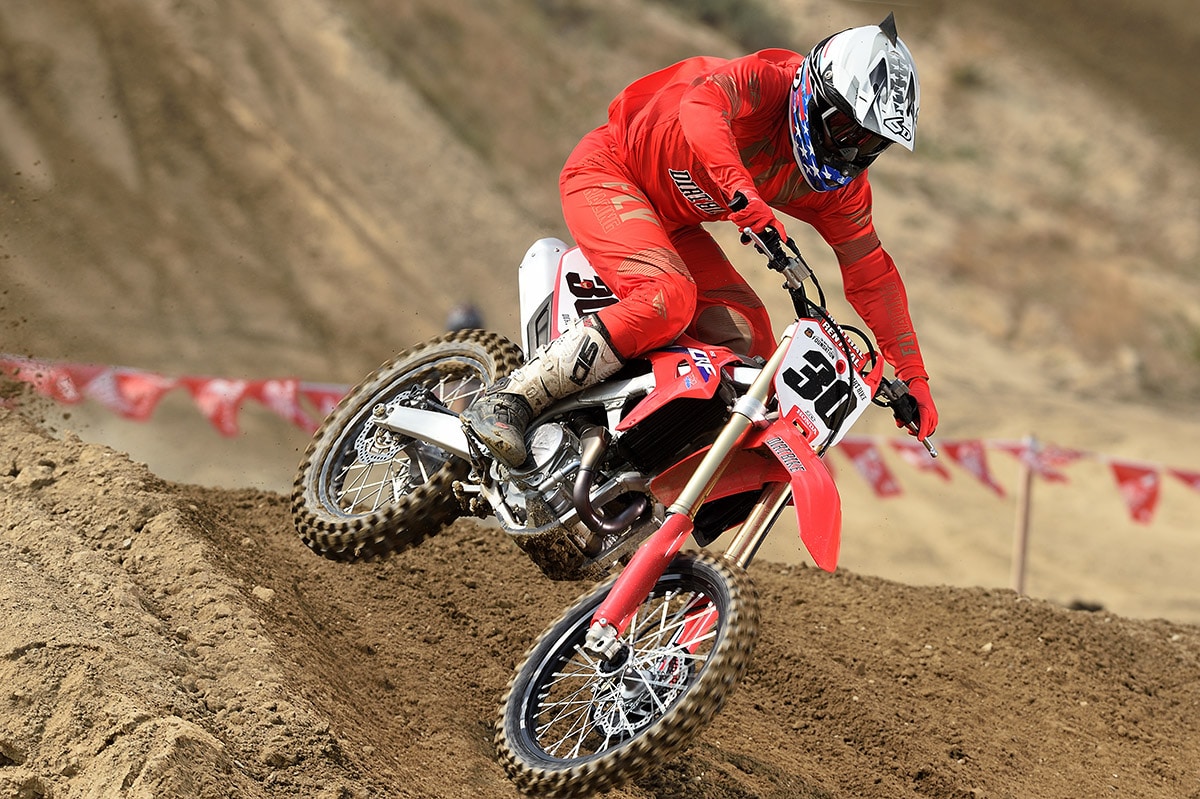 THE BIG PICTURE
Over the last dozen years or so, the Honda CRF450R has received some good reviews and some poor ones. There have, however, been a few recurring complaints—the clutch for one, the weight for another. Both of those were addressed this time. Honda is finally serious about making the 2021 CRF450R an all-time great. The few areas where it comes up short are all in the final settings; things like mapping and suspension settings. Those are all issues the end user can correct on his own. Perhaps COVID-19 threw a roadblock up at the final stretch, but the bottom line is that the new Honda is a major breakthrough and has the potential to be the bright spot in an otherwise dismal period. It just needs to be finished.