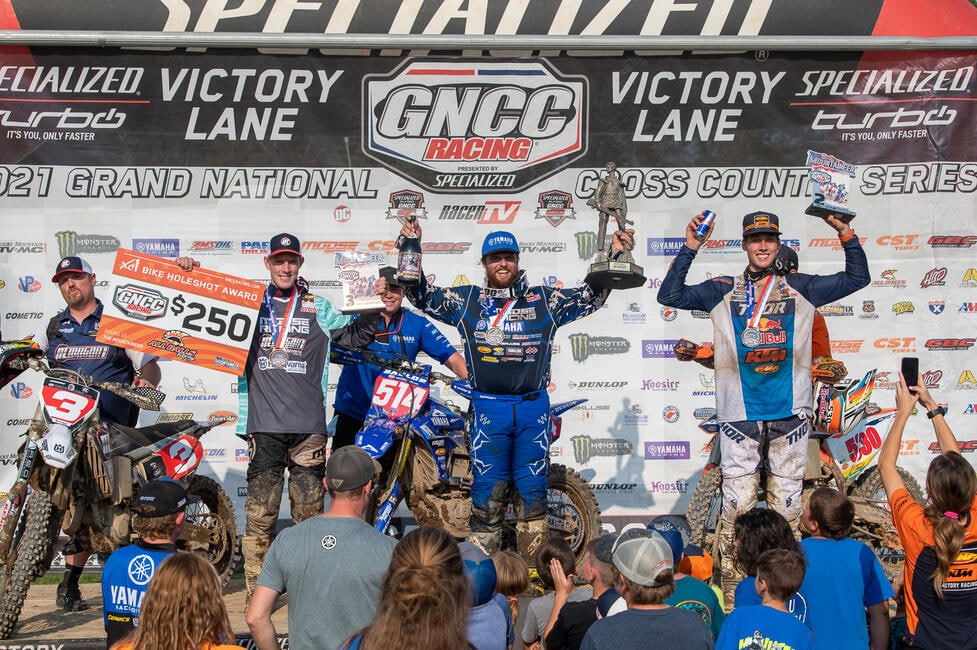 The summer break is officially over and GNCC Racing is back in action with all the championship contenders healthy. When the series went on break Am/Pro Yamaha rider Steward Baylor and Red Bull KTM’s Ben Kelley were in very close points battle and it’s only getting closer. Four points separate the two riders with only three rounds left. Below is the race report from this weekends event.

As the green flag waved it was Magna1 Motorsports/Husqvarna’s Jordan Ashburn jumping off the line first to earn the $250 All Balls Racing XC1 Holeshot Award. Ashburn would soon have AmPro Yamaha’s Steward Baylor at his heels making the pass for the lead as they battled throughout the first lap. Baylor would continue to lead the way, but Ashburn was not letting him too far out of his sights. As the two front runners came through to see the two-lap card Ashburn was just eight seconds behind Baylor.

Baylor would continue to lead as he would also begin to place another gap over the rest of the field by the time the white flag came out, indicating one more lap to go. Baylor would come through over a minute ahead of Ashburn, who was still running in the second place position. However, FMF/KTM Factory Racing’s Benjamin Kelley was making his way closer and closer as they raced to the checkered flag.

As the riders emerged out of the woods towards the finish line, it was Baylor leading the way. In Baylor fashion he would wheelie his motorcycle through the finish line earning his sixth win of the season. Baylor now moves himself within 4 points of Kelley and the National Championship. Ashburn and Kelley would emerge together, with Kelley going outside to inside and taking the second place position with just one corner remaining. Ashburn would find himself crossing the line to take third overall after a strong performance throughout the duration of the three-hour race.

FMF/KTM Factory Racing’s Josh Toth would have a consistent day as he crossed the finish line fourth overall. Toth would start his day in fourth as he came through on the opening lap, and he would remain in that position throughout the entirety of the race.

The Rockstar Energy Factory Husqvarna Racing teammates of Thad Duvall and Trevor Bollinger finished out the day fifth and sixth in the XC1 Open Pro class. Duvall would take fifth overall, while Bollinger would earn 10th overall after the XC2 adjusted timing came into play.

Coming through to earn seventh in class was AmPro Yamaha’s Layne Michael. After battling up in sixth for majority of the race Michael would come in seventh in XC1 and 11th overall. RedBull/MCS Racing Sherco’s Benjamin Herrera battled back for an eighth place finish in XC1, and a 17th overall finishing position. Unfortunately for Babbitt’s Online/Monster Energy/Kawasaki Team Green’s Josh Strang, he would suffer from mechanical issues throughout the day.

In the XC2 250 Pro class it was Rockstar Energy Factory Husqvarna Racing’s Craig DeLong who would grab the early lead after earning the $100 Hot Cams XC2 Holeshot Award. DeLong would continue to race out front, but he would soon be joined by the Coastal GASGAS Factory Racing machine of Johnny Girroir. With only two seconds separating the two, Girroir would make the pass stick on lap three. Girroir would begin to place a gap between himself and DeLong as the race wore on, and as the checkered flag came out it was Girroir with a 24 second lead as DeLong came through in second.

AmPro Yamaha’s Michael Witkowski would round out the XC2 podium after returning to racing. Witkowski would be sidelined after round eight, missing snowshoe and taking the summer break to evaluate himself. Witkowski came back ready to go and will strive to finish out the season strong.

As the checkered flag flew it was Magna1 Motorsports/Husqvarna’s Jonathan Johnson racing through to earn his eighth win in the FMF XC3 125cc Pro-Am class. Johnson continues to hold the lead as the series heads into the final three rounds. Lojak Yamaha Cycle Sales’ Chase Colville had a solid day of racing as he battled in the second place position. Colville was pushing to catch Johnson, but he would ultimately run out of time as he crossed the line in that second place finishing position. AOMC/FXR Gear/JDP Suspension’s Jason Lipscomb earned himself an extra $100 by jumping out to grab the Lojak Cycle Sales Holeshot Award. Lipscomb would then come through in fourth on the first lap, but he would soon make his way back into podium contention holding it until the very end and earning his first podium finish of the season.

In the 10 a.m. race it was the WXC competitor, AmPro Yamaha’s Rachael Archer coming through to take the class win and points lead in the championship standings over BABS Racing Yamaha/Fly Racing/Maxxis/Pro Circuit’s Becca Sheets, who came through to finish second in WXC after brutal day of racing in West Virginia. Archer holds a three point lead over Sheets with three races remaining. Enduro Engineering/MEP MX/Fly Racing/XC Gear’s Mackenzie Tricker would round out the top three WXC finishers after having a consistent race at round ten.

Caleb Haynes from Springfield, MO would physically take the overall win as he battled in the Sportsman A class with Samuel Evans taking second overall ahead of the WXC competitors on the day.

In the 8 a.m. youth race it was Cole Forbes battling through to take his eighth overall youth win of the season. Forbes would start out his day in the third place position, but he would put his head down and push steadily making his way through the pack to take over the lead with three laps remaining. Nicholas DeFeo and Caleb Lane would push to hold off Forbes as they battled for the number one spot early in the race. DeFeo would manage to make the pass on Lane and hold onto second until the checkered flag flew. For Lane, he would cross the line in third overall and in the YXC1 Super Mini Sr. class after holding the lead position on lap one.